Accessibility links
NPR Photographer, Interpreter Killed In Afghanistan : The Two-Way David Gilkey and Zabihullah Tamanna were killed while traveling in a convoy with an Afghan army unit. 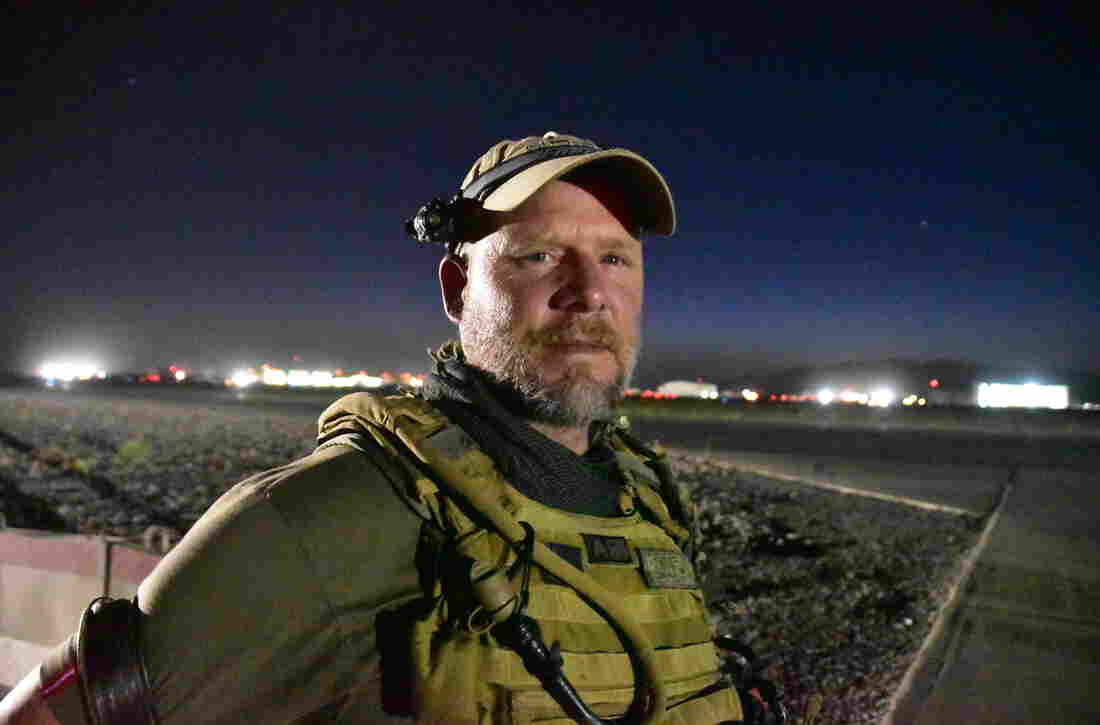 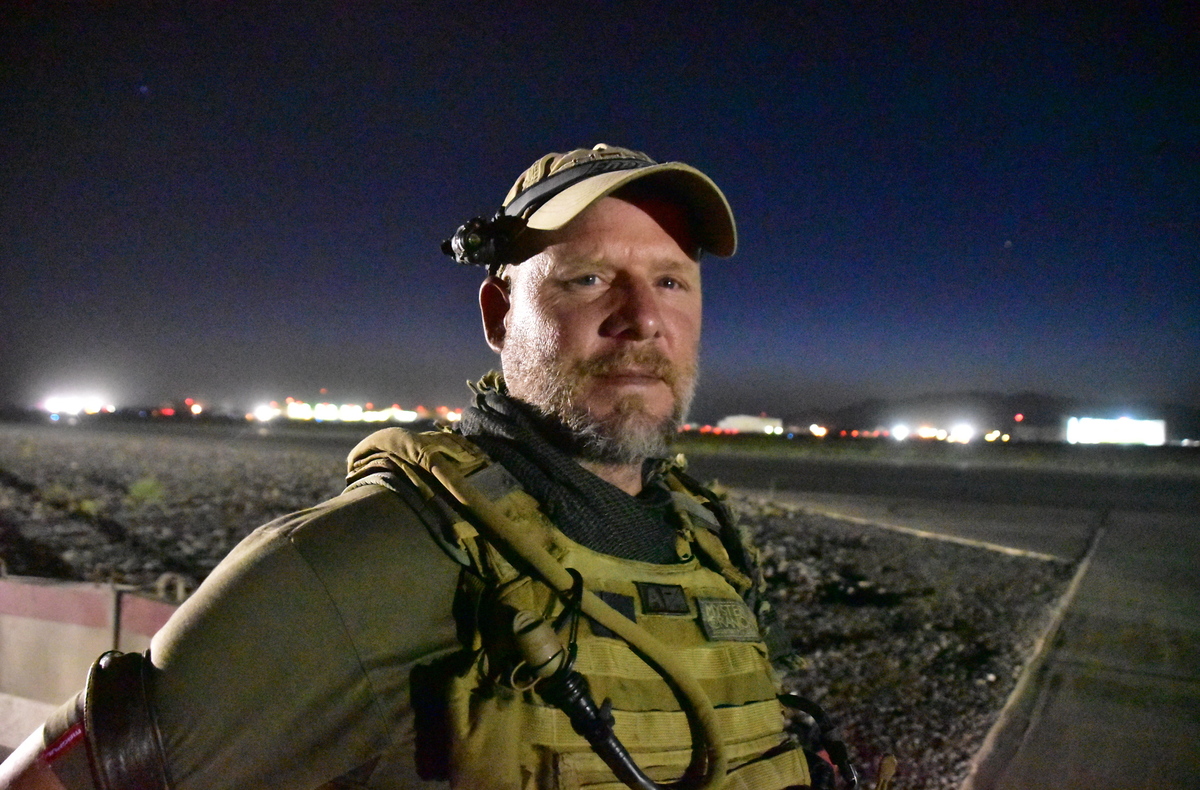 NPR photographer David Gilkey at Kandahar Airfield, Afghanistan, on May 29, 2016. 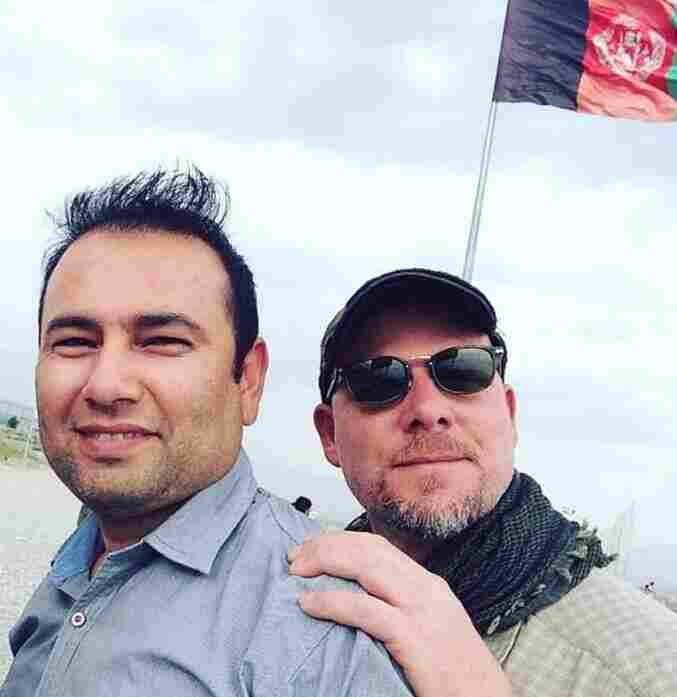 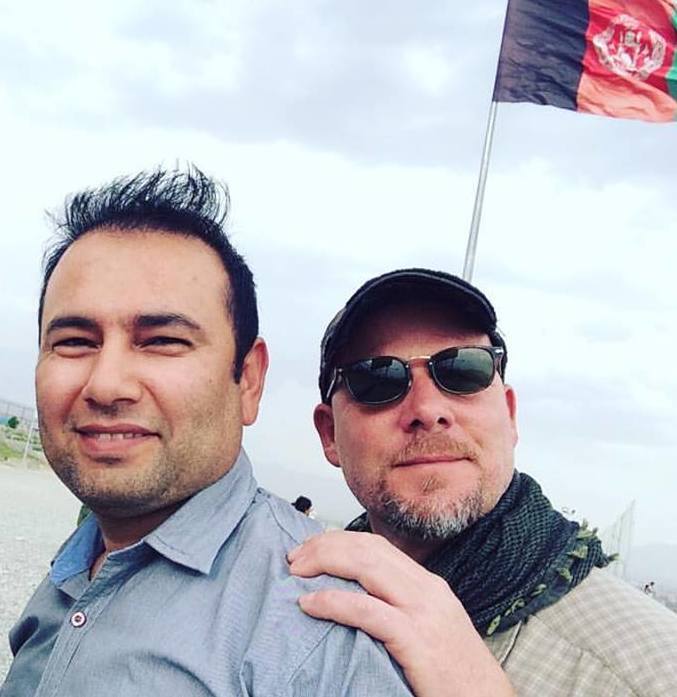 Zabihullah Tamanna (left) and David Gilkey in Afghanistan on June 2.

David Gilkey, an NPR photojournalist who chronicled pain and beauty in war and conflict, was killed in Afghanistan on Sunday along with NPR's Afghan interpreter Zabihullah Tamanna.

David and Zabihullah were on assignment for the network traveling with an Afghan army unit. They were in an armored Humvee driven by a soldier of the Afghan National Army. All three were killed after the Humvee was hit by rocket propelled grenades in an apparent ambush.

NPR Pentagon correspondent Tom Bowman and producer Monika Evstatieva were also in the convoy, traveling in a separate vehicle. They were not injured.

Tom reports that when the journalists' remains arrived by helicopter at Camp Shorab in Helmand Province — where the U.S. Army 10th Mountain Division has a training mission — an honor guard of "dozens and dozens" of U.S. soldiers stood at attention and saluted.

David was 50 and Zabihullah, who for years also worked as a photographer, was 38.

David was considered one of the best photojournalists in the world — honored with a raft of awards including a George Polk Award in 2010, a national News and Documentary Emmy in 2007 and dozens of distinctions from the White House News Photographers Association, including 2011 Still Photographer of the Year.

Zabihullah Tamanna, An Afghan Journalist With A 'Great Eye For A Story'

It is fair to say that David witnessed some of humanity's most challenging moments: He covered wars in Afghanistan and Iraq. He covered the conflict between Israel and Hamas in Gaza. He covered the end of the apartheid regime in South Africa. He covered the devastating earthquake in Haiti, famine in Somalia and most recently the Ebola epidemic in Liberia.

His images were haunting — amid the rubble, he found beauty; amid war, he found humanity.

Back in 2010, after he covered the earthquake in Haiti, he talked about his craft. The camera, he said, made things easier.

"It's not like you put the camera to your face and therefore it makes what you're seeing OK, but certainly you can put yourself in a zone," David said. "It's hard, but you can't get caught up in it and become part of it. You still need to maintain your state of mind that you are helping tell this story."

His craft, he said, was about more than journalism.

"It's not just reporting. It's not just taking pictures," he said. "It's, 'Do those visuals, do the stories, do they change somebody's mind enough to take action?'"

"As a man and as a photojournalist, David brought out the humanity of all those around him," Michael said. "He let us see the world and each other through his eyes." 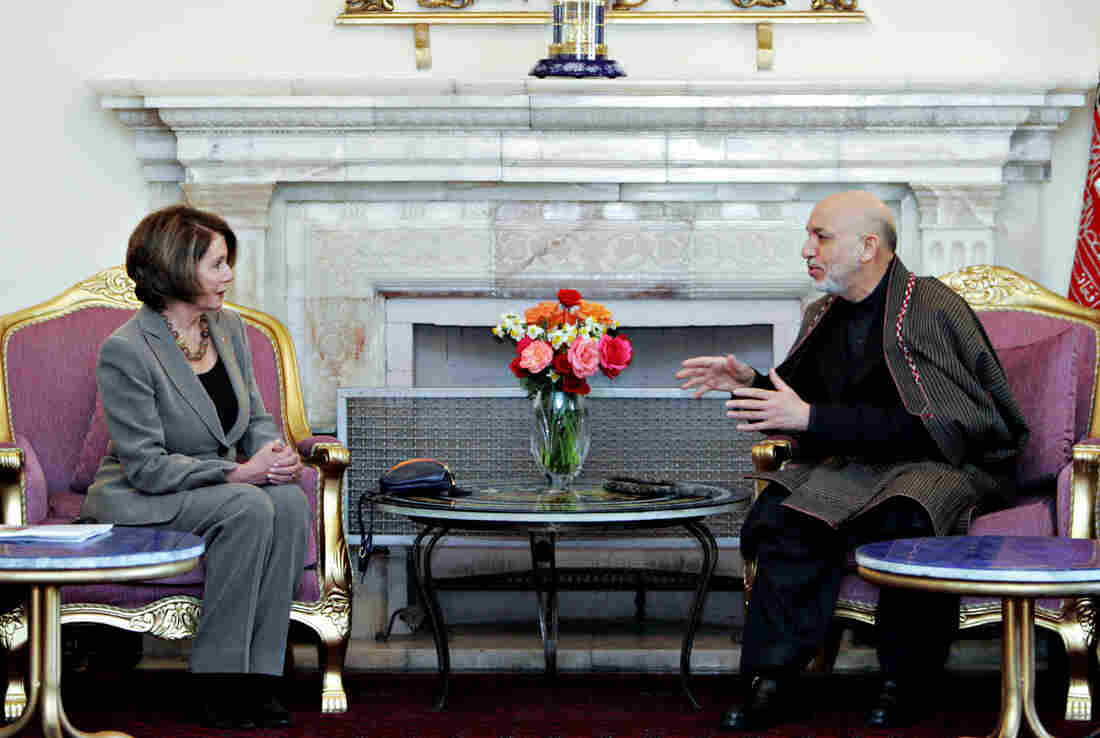 Zabihullah Tamanna was a photographer in Afghanistan for years. Here, one of his images of Afghanistan President Hamid Karzai (right) during a talk with U.S. House Speaker Nancy Pelosi at the Presidential Palace in Kabul on February 21, 2009. Zabi Tamanna/AFP/Getty Images hide caption

Keith Jenkins, the general manager for digital at the National Geographic Society who edited David at NPR, said he and David talked a lot about the dangers of the work David was doing and how much longer he could keep doing it.

"Ultimately, he felt it was really important to tell those stories and to tell them to a society that can very often forget that we have people in harm's way on a daily basis," Keith said.

"It's a very hard thing to put into words, the peace you sort of make with what you're gonna be doing," David said. "I'm not saying you walk into these situations and you're fatalistic about it but you also are preparing and making decisions based on the sort of level of threat that is there."

Zabihullah, who was known as Zabi, worked as a photojournalist for the Chinese news agency Xinhua. More recently, he wrote for Turkey's Anadolu News Agency. Zabihullah kept a tick-tock on the country. He wrote the big news — when a new Afghani president was sworn in — but also covered the daily attacks and drone strikes that killed militants and civilians.

NPR's Philip Reeves recruited Zabihullah to NPR. He called him a "great colleague."

"He was a lovely man, with a great eye for a story and deep wisdom about his country," Philip said. "He clearly loved his family."

I was saddened to learn today of the death of an NPR photographer, ‎David Gilkey, and his colleague Zabihulla Tamanna, who were part of a crew reporting on Afghan forces in the southern part of the country.

This attack is a grim reminder of the danger that continues to face the Afghan people, the dedication of Afghan national defense and security forces to securing their country, and of the courage of intrepid journalists — and their interpreters — who are trying to convey that important story to the rest of the world.

David Gilkey certainly never shied away from conveying those stories, whether there in Afghanistan or Somalia, Haiti, Gaza, Iraq and dozens of other places around the world. He was ‎more than a gifted photographer. He was a gifted story‎teller, who understood the power of imagery to enhancing the power of understanding. He will be sorely missed.

Teresa and I send our t‎houghts and prayers for these courageous individuals to their colleagues, friends and families.