Accessibility links
Stanford Has Most Sexual Violence Cases Under Review, U.S. Agency Says : The Two-Way Just before the Brock Turner case sparked fresh outrage, a federal agency issued its latest list of inquiries into how such cases are handled on U.S. campuses. Stanford tops the list, with five cases. 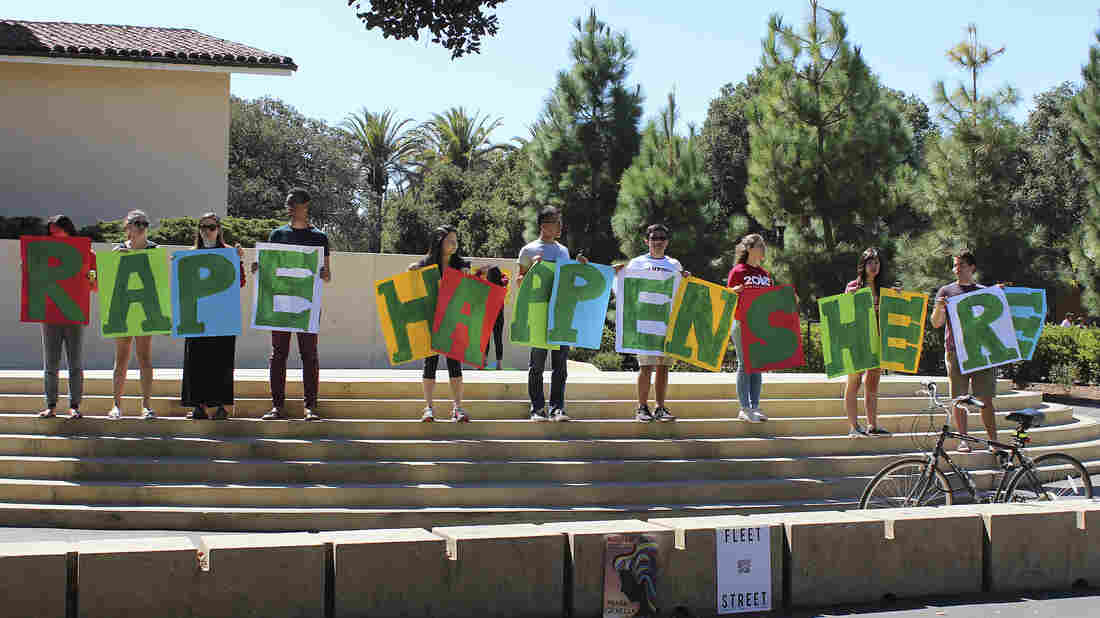 Stanford has found itself in a string of high-profile sexual assault cases. During a demonstration last September, students held a sign about rape at the university's White Plaza during new student orientation. Tessa Ormenyi/AP hide caption 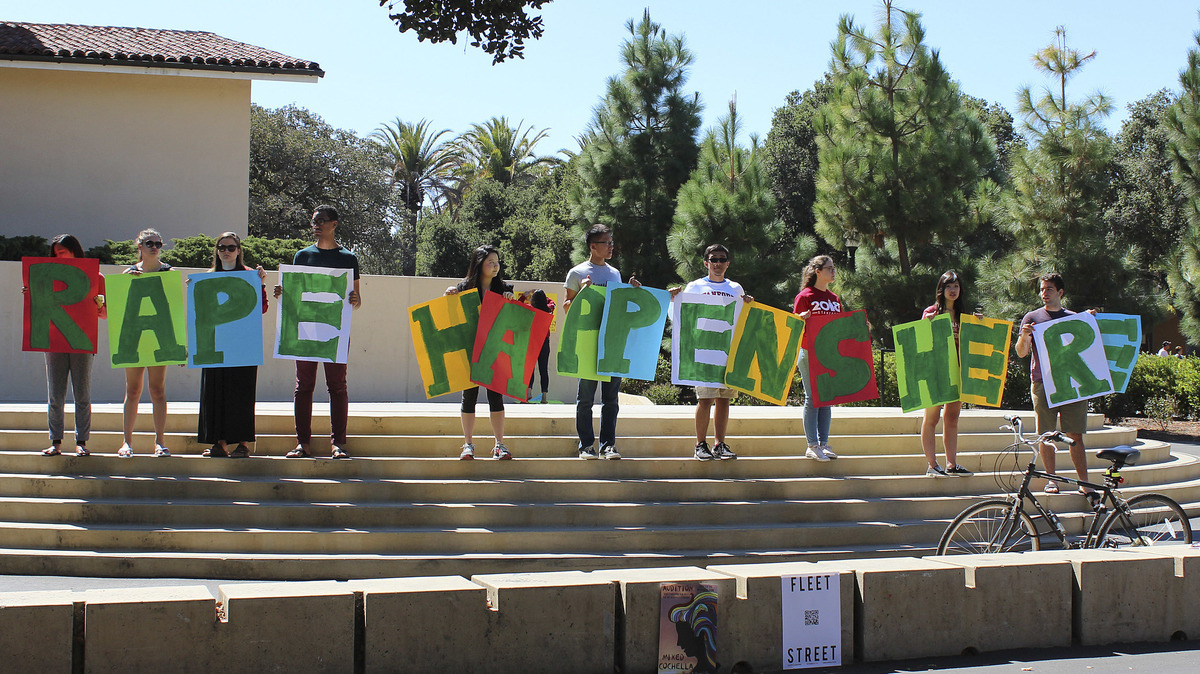 Stanford has found itself in a string of high-profile sexual assault cases. During a demonstration last September, students held a sign about rape at the university's White Plaza during new student orientation.

When the U.S. government released its tally of sexual violence cases on college campuses under review in 2014, Stanford wasn't on the list. But in the new list that's out this month, Stanford has the most cases, with five.

The notorious assault that's been making headlines is not among the cases under federal review.

That crime, committed by former Stanford swimmer Brock Turner, generated outrage when a judge sentenced Turner to six months in the county jail after he was convicted of three felony counts related to his sexual assault of an unconscious woman on campus in January 2015.

Turner's sentence has sparked a renewed debate over the role of race and privilege in sentencing; it has also led some to urge a recall of Superior Court Judge Aaron Persky, whose explanation for the decision to spare Turner from a potential three to 14 years in prison included concern that prison might "have a severe impact on him."

The Turner case was handled by the criminal justice system, not by Stanford. But the number of complaints to the Department of Education's Office of Civil Rights, which enforces the Title IX gender equity law, shows that the prestigious university is facing criticism about how it handles such cases — criticism that has included both a protest and a federal lawsuit.

Here's the list of investigations into incidents at Stanford, from the Office of Civil Rights. We'll note that the dates refer to the timing of an OCR complaint, not to the initial allegations of an attack:

To put the number of cases in context: The federal list includes 243 sexual violence cases at 192 post-secondary institutions, as of June 1. Apart from Stanford, two other schools had four cases: Kansas State University and Saint Mary's College of Maryland. Six other schools had three cases.

When we sought comment from Stanford about how it accounts for the number of open investigations, Lisa Lapin of the university's communications office said the school "is fully cooperating with the OCR investigation, which as at other universities will be comprehensive."

"In one of the matters, both the complaining student and the responding student filed concerns with OCR," she said.

Lapin also described the cases in question, omitting details such as names and places:

Discussing the timing of the cases, Lapin says, "All of these cases precede our existing Title IX procedure, and some took place as long ago as 2011. Some were investigated by the Office for Community Standards as well as the [university's] Title IX office."

As for the Turner case, Stanford noted this week that it had banned him from its campus within weeks of the attack, saying in a statement Tuesday that it had also reached out to the victim to inform her of the steps being taken.

Stanford says it "did everything within its power to assure that justice was served in this case, including an immediate police investigation and referral to the Santa Clara County District Attorney's Office for a successful prosecution."

While much of the current criticism over the Turner case is now being directed at the judge, Stanford has found itself at the center of another high-profile sexual assault case — continuing a string that goes back at least to 2014, when a female student took the rare step of going public to criticize how the school handled her case, as the Palo Alto Weekly reported.

The federal list of open sexual violence investigations, which is compiled by the Department of Education's Office for Civil Rights, debuted in 2014 as part of an effort to improve the way colleges and universities handle reports of sexual violence. In addition to the list, the government offered guidance and other resources at a new website, called Not Alone.

When the government took that step, Stanford was also taking action: When the first OCR list was published, the school was in the process of hiring its first full-time Title IX coordinator, an expert on preventing sexual misconduct.

That coordinator, Catherine Criswell, was a veteran of the federal Office for Civil Rights. She left Stanford just before the start of the most recent school year, to take a more senior position at the University of Virginia.

Since February, Stanford has been handling sexual assault claims under a pilot program that reflects changes that were recommended by a provost task force. We were curious about how the new investigation and resolution process works; here's how Lapin described it:

"Among other things, the process calls for a unified investigation and adjudication system, highly trained hearing panels to decide responsibility and sanction, the ability of parties in a case to receive up to 9 hours of paid legal assistance if they wish, and expulsion as the expected sanction for sexual assault cases as defined by university policy."

Lapin added that because the program is being run as a pilot, it will be monitored and evaluated for possible further changes. For it to become permanent, she said, the process would need the approval of groups representing both the students and faculty of Stanford.