Accessibility links
Massive Structure Found 'Hiding In Plain Sight' At Ancient Site Of Petra : The Two-Way Researchers using satellite images and drones discovered a structure the size of an Olympic-size pool near the center of the ancient city in Jordan. But what exactly it was used for remains a mystery. 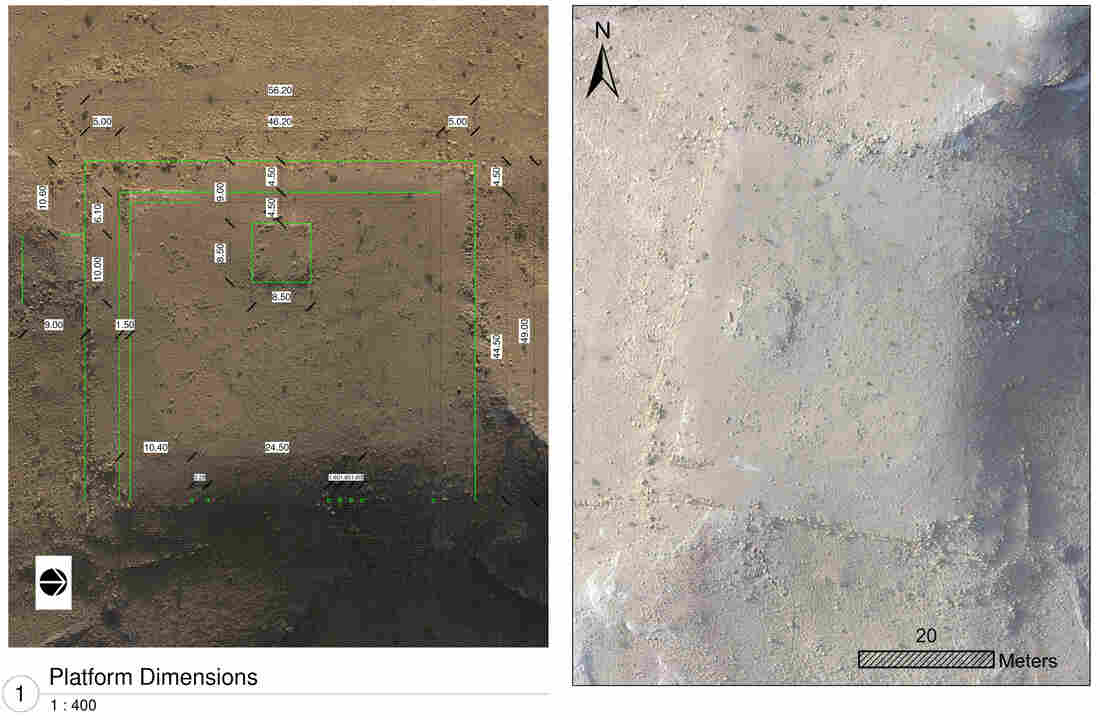 This composite of drone images shows architectural details and measurements (left) and a close-up view of a monumental structure near the center of Petra in Jordan. I. LaBianca/Graphics by J.Blanzy hide caption

Using Google Earth, satellite imagery and drones, researchers have discovered a monumental structure amid the world-famous ruins of Petra, Jordan.

It was apparently "hiding in plain sight" — a structure the size of an Olympic-size pool "just south of the city center, and archaeologists have missed this for 150, 200 years," researcher Sarah Parcak tells The Two-Way. The area sees huge crowds of visitors, with half a million tourists descending on Petra annually.

The massive structure's use remains a mystery, says Parcak of the University of Alabama, Birmingham. "We know it's large, it's significant, it's important. It probably would have had some kind of a public function. ... Could it be used for religious purposes? Was it some sort of public administrative structure? I wish I knew."

Petra, a UNESCO world heritage site, is famed for its breathtaking structures cut directly into rose-colored rock faces. You might also recognize it as the setting of the climactic final scenes of Indiana Jones and the Last Crusade. 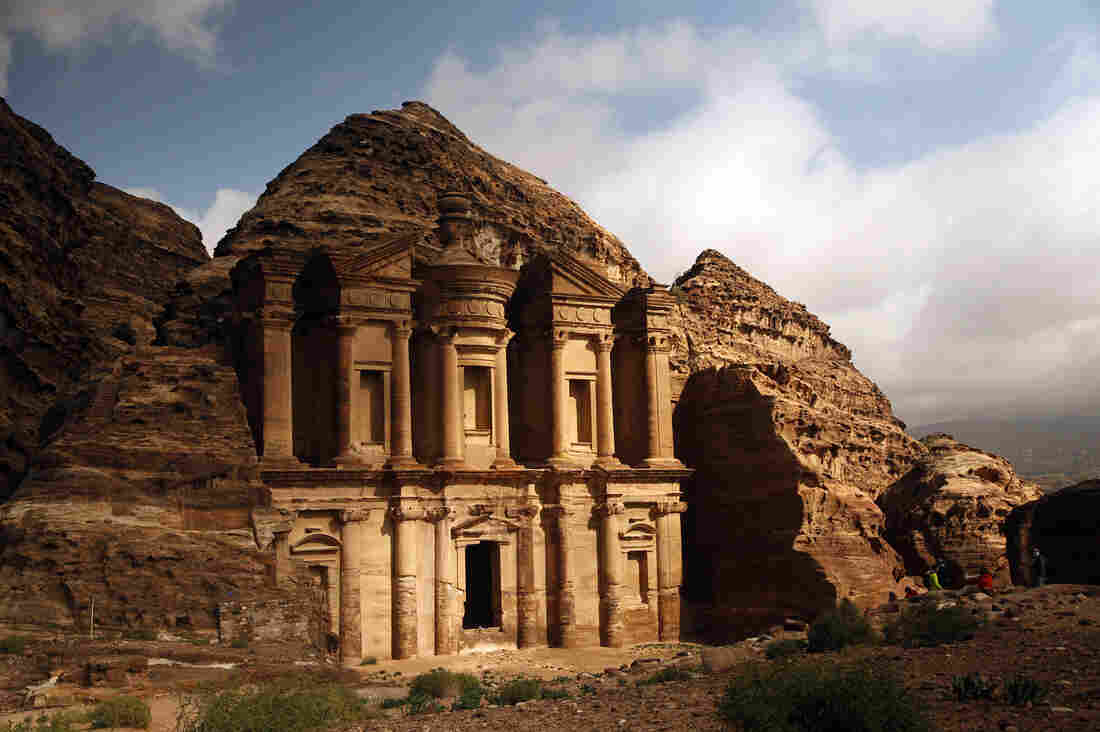 Sun peeks out of rain clouds to light up the famous monastery in Petra, Jordan. Sam McNeil/AP hide caption 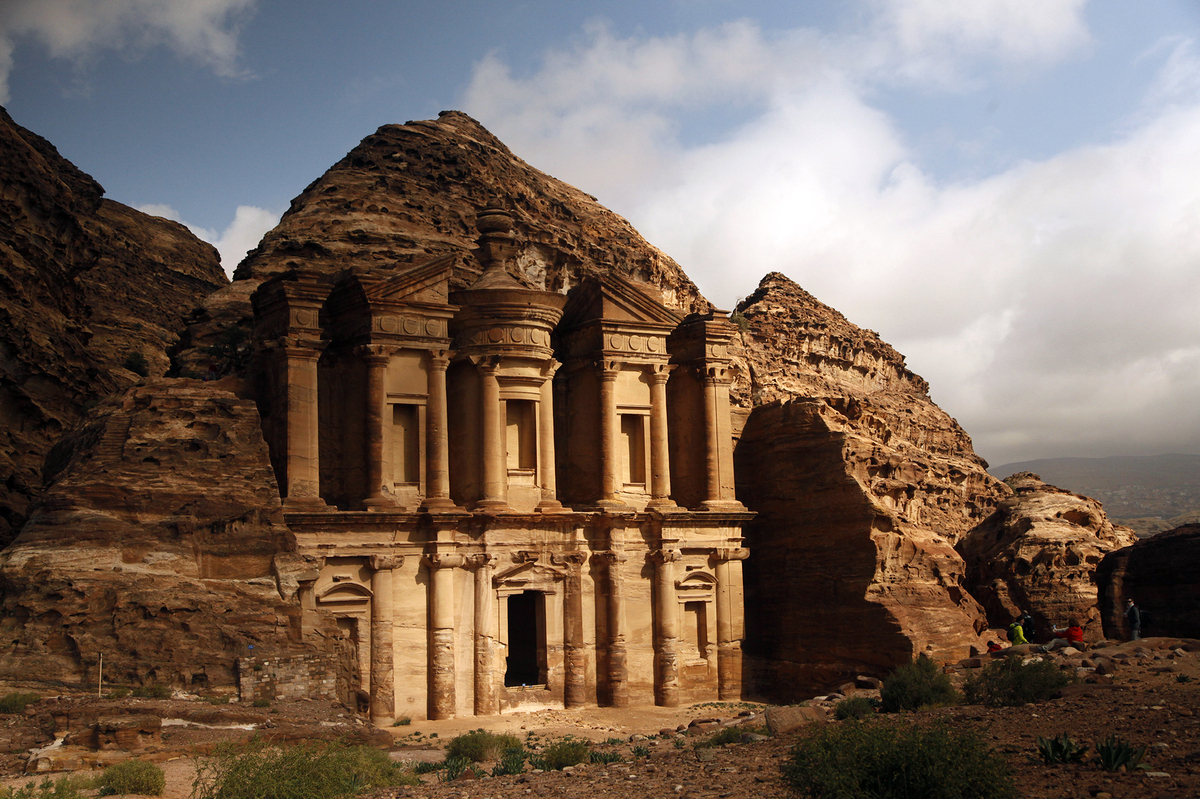 Sun peeks out of rain clouds to light up the famous monastery in Petra, Jordan.

Fittingly, Parcak has been called a "modern-day Indiana Jones." She's a space archaeologist, and as NPR has reported, she "uses satellite imagery to track looted ancient burial sites and find pyramids hidden under Egyptian cities."

Parcak explains the Petra project to The Two-Way:

"When we started this project, the idea was to apply very high-resolution 0.5 meter, which is a foot and a half, satellite imagery to look for potential new features at Petra, just because it had never been done before.

"And we thought that maybe we'd find some small stone structures or roads, but we didn't think at all that we would find anything large, just because Petra is a world heritage site and it's been worked on intensively for nearly 200 years."

How Can Satellite Images Unlock Secrets To Our Hidden Past?

When imagery of the large structure popped up, she "actually dismissed it initially." But it was interesting enough to pass along to her colleague working on the ground in Petra, Christopher Tuttle, who found foundations and column bases at the site.

The structure itself comprises a small platform surrounded by a large rectangular platform. The smaller platform likely had a row of sandstone drum columns, and has a tiny structure on it measuring about 27 square feet — but the structure's condition won't be known until it's excavated.

Parcak says the overall structure has no parallels in Petra: "In terms of the size of the structure, its shape, its orientation, where it's located, there's nothing else like it there."

The researchers think it was built "when Petra was flourishing as the capital city of the Nabataean kingdom, possibly as early as the mid-second century B.C.E.," as they wrote in a newly published paper in the Bulletin of the American Schools of Oriental Research.

As the paper says, the discovery has provoked numerous questions about its functions:

"The amount of effort to construct the site was massive, yet the focal building itself is quite small. The platform is located relatively close to the ancient city center but in a spot where easy access from the city center is not readily apparent."

Some of the mystery might be cleared up during excavation, which Parcak says they are thinking of doing over the next couple of years.