Accessibility links
LGBT Community Mourns Orlando Attack, Boosts Security At Pride Events : The Two-Way A gay club in Orlando was attacked Sunday morning in the deadliest mass shooting in modern U.S. history. The attack comes during Pride month, when LGBT events are planned across the country. 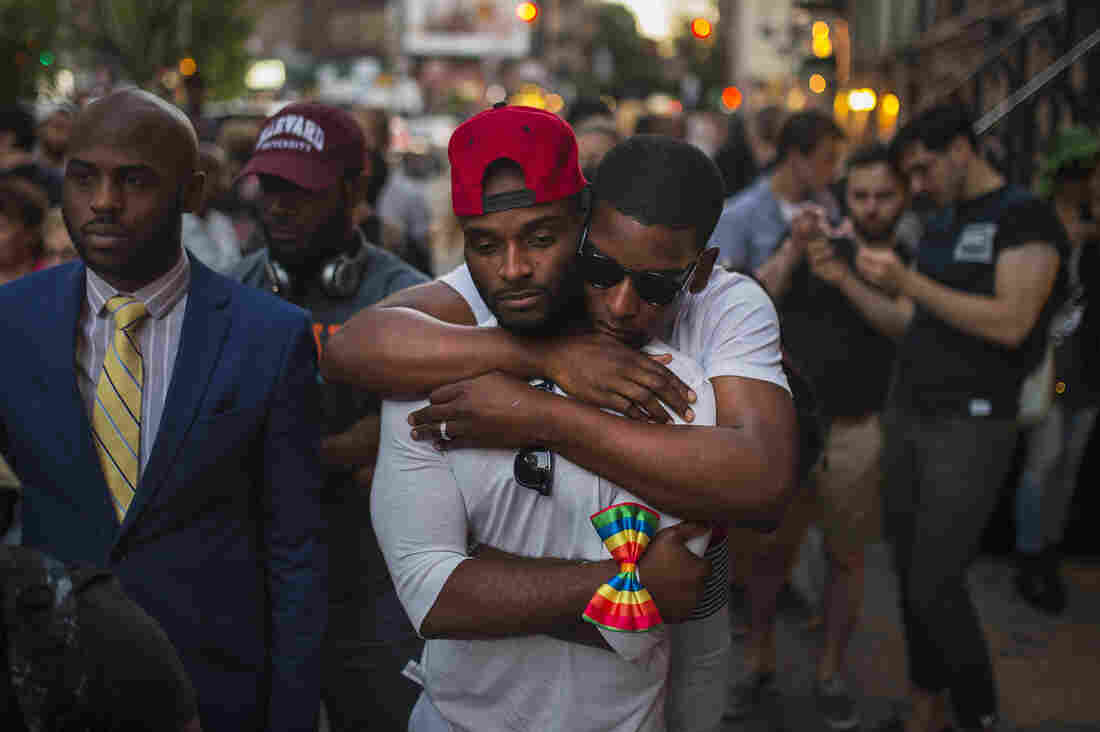 A couple hugs as people gather in front of a makeshift memorial in New York to remember the victims of the mass shooting in Orlando, Fla. on Sunday. Andres Kudacki/AP hide caption 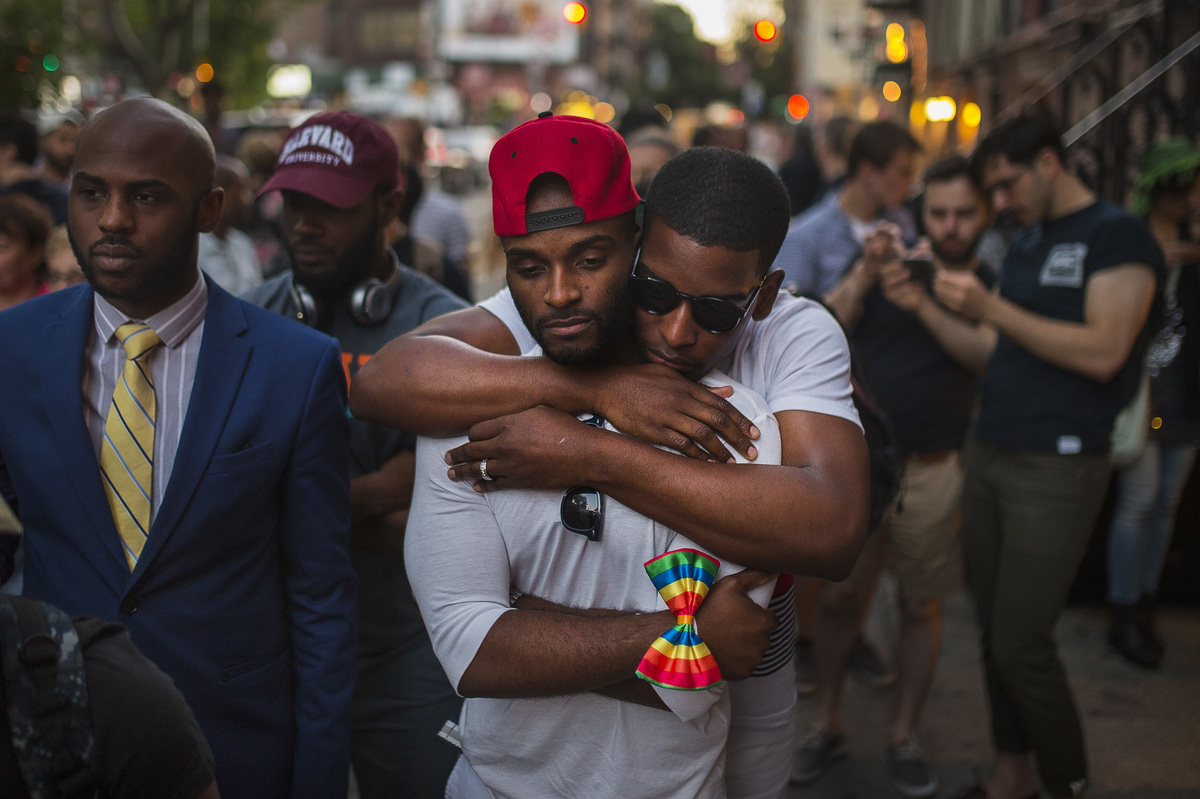 A couple hugs as people gather in front of a makeshift memorial in New York to remember the victims of the mass shooting in Orlando, Fla. on Sunday.

With sorrow, anger and expressions of unity, the LGBT community across the world is mourning Sunday's deadly attack on a gay nightclub in Orlando. Meanwhile, security has been increased at LGBT landmarks and events in cities across America.

The attack — in which a gunman killed 50 people, making it the deadliest mass shooting in recent U.S. history, and injured 53 — struck during Pride Month, which commemorates the Stonewall Riots of 1969 and the gay rights movement more broadly.

While authorities have not confirmed if the nightclub was targeted specifically because it was a gay club, the attack has been keenly felt by the LGBT community.

"We make no assumptions on motive," Equality Florida, an LGBT rights group, said in a statement after the attack. "We will await the details in tears of sadness and anger. We stand in solidarity and keep our thoughts on all whose lives have been lost or altered forever in this tragedy." 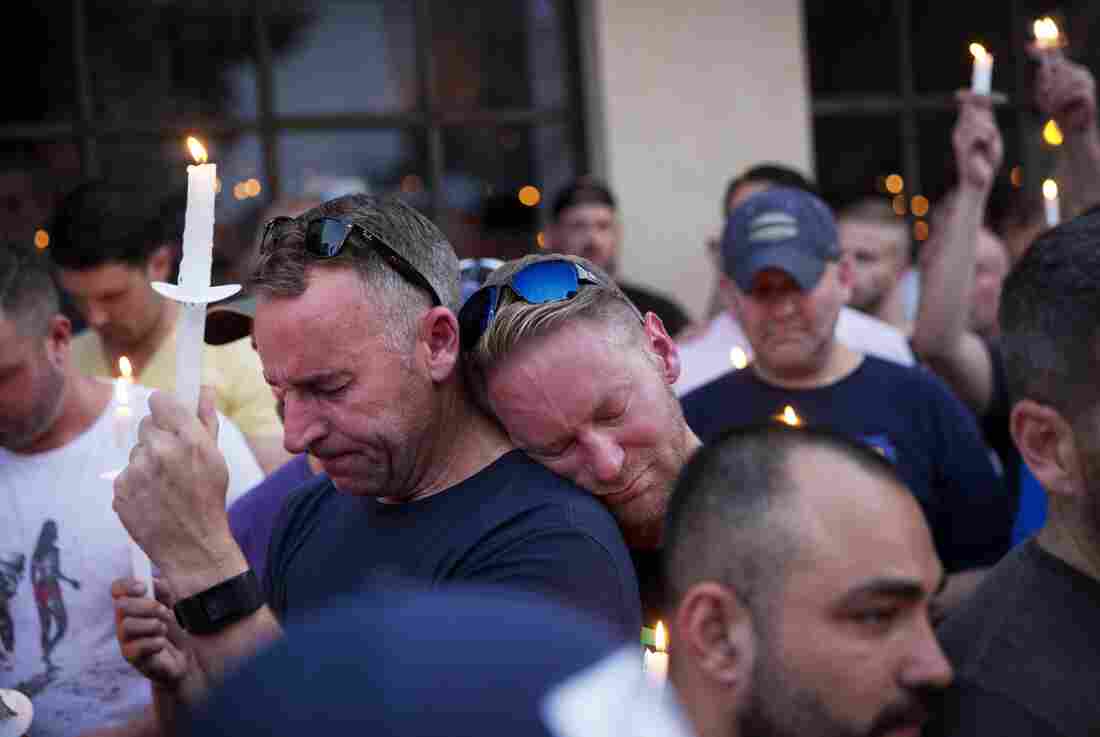 Paul Cox (right) leans on the shoulder of Brian Sullivan, as they observe a moment of silence during a vigil in Atlanta on Sunday. David Goldman/AP hide caption

Also on Sunday, a 20-year-old Indiana man was arrested in California with assault-style rifles and materials that could be used to create an explosive device in his car, police say. He told police officers he was heading to Los Angeles' Pride festival, the LA Times reports.

There is no known connection to the attack in Orlando, the police chief said.

In the wake of the attack and the arrest, police across the country have announced they are increasing security measures at a number of Pride events, as well as at LGBT landmarks like the Stonewall Inn.

And the LGBT community and its allies have marked the attack with mourning and remembrances.

"This is a person who at the beginning of LGBT Pride Month ... took open fire on a gay nightclub at maximum capacity," she said. "In the midst of our grief we are more deeply resolved than ever to uproot homophobia and animosity towards gay and transgender people, wherever it exists."

She said while the shooter's motive may be unknown, "this is our community that was under attack." 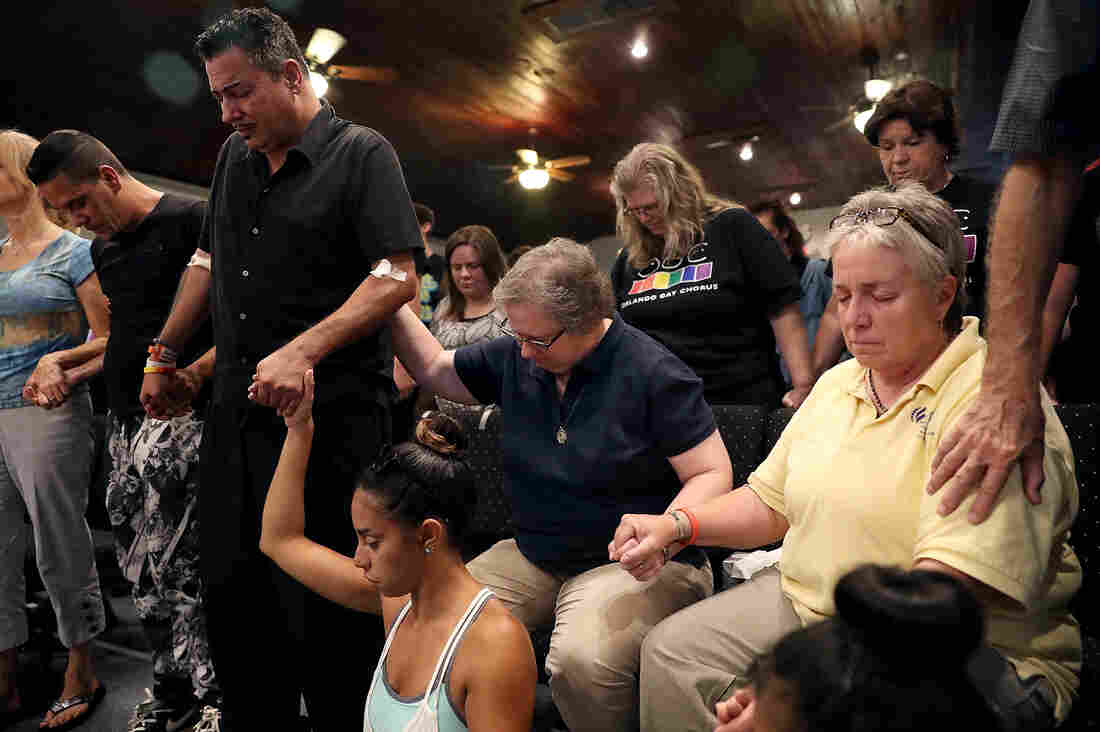 Orlando (who did not want to provide his last name; second from left), who was injured in the mass shooting at the Pulse Nightclub, attends a memorial service at the Joy MCC Church in Orlando, Fla. Joe Raedle/Getty Images hide caption

Flags at government buildings across Florida are being flown at half-staff in honor of the victims.

In Orlando itself, because of a thinly stretched police force, the city has asked its mourning people to refrain from gathering for vigils.

"We understand our community is grieving," the city said in a statement, but vigils "represent a serious strain on our limited resources."

But people gathered together in smaller groups — including a vigil at the Iglesia El Calvario, attended by Gov. Rick Scott, and a gathering at the Ember restaurant and bar. 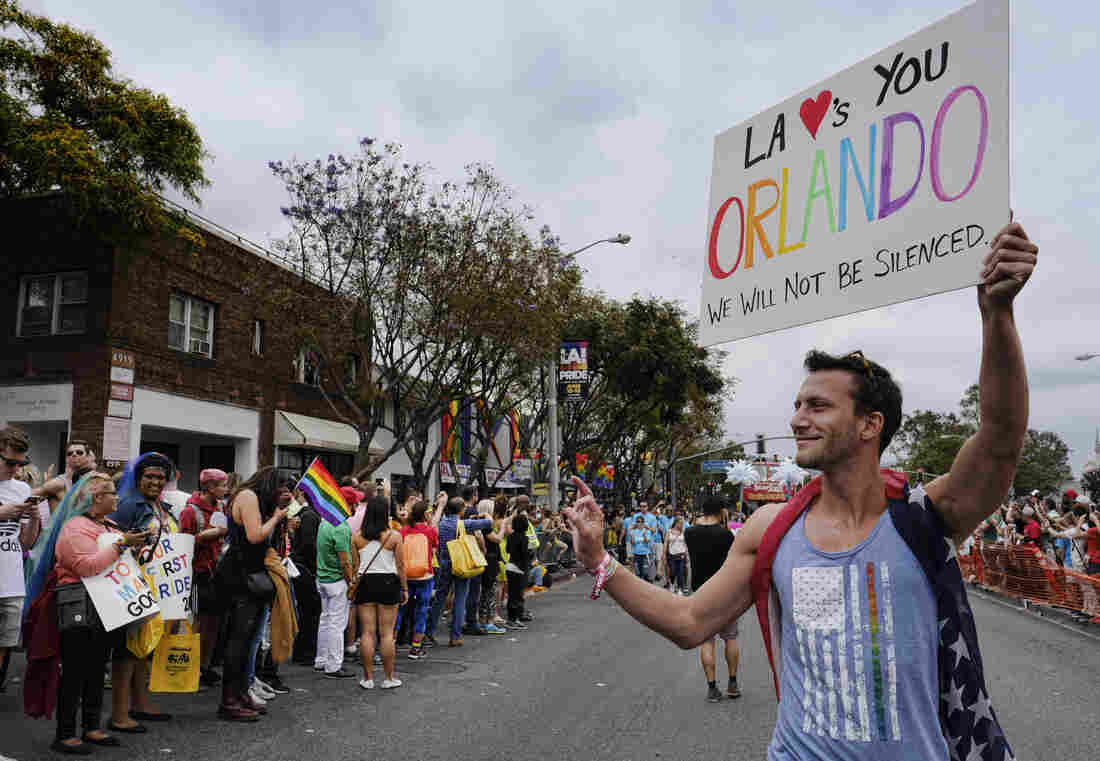 Branden Joyce holds a sign in support of the shooting victims in Orlando during the gay pride parade in West Hollywood, Calif. Richard Vogel/AP hide caption

NPR's Ari Shapiro spoke to Julius Ortiz at Parliament House in Orlando. Ortiz spoke about his experience at Pulse and his friend, victim Luis Omar Ocasio-Capo:

"I was at Pulse. It was actually 1:54...um, he actually texted me. And I was asking him where he was at and he said...he was at the bathroom. However, he was ready to go home. So by 1:56, we had left Pulse. And about ten minutes later, I got a text from my friend basically saying that there was a shooting and he's in the bathroom."

We'll hear more of Ari's reporting on All Things Considered on Monday.

Meanwhile in Los Angeles, where Sunday was the day of the big Pride Parade, attendants were shocked by both the attack in Florida and the arrest in their own backyard. 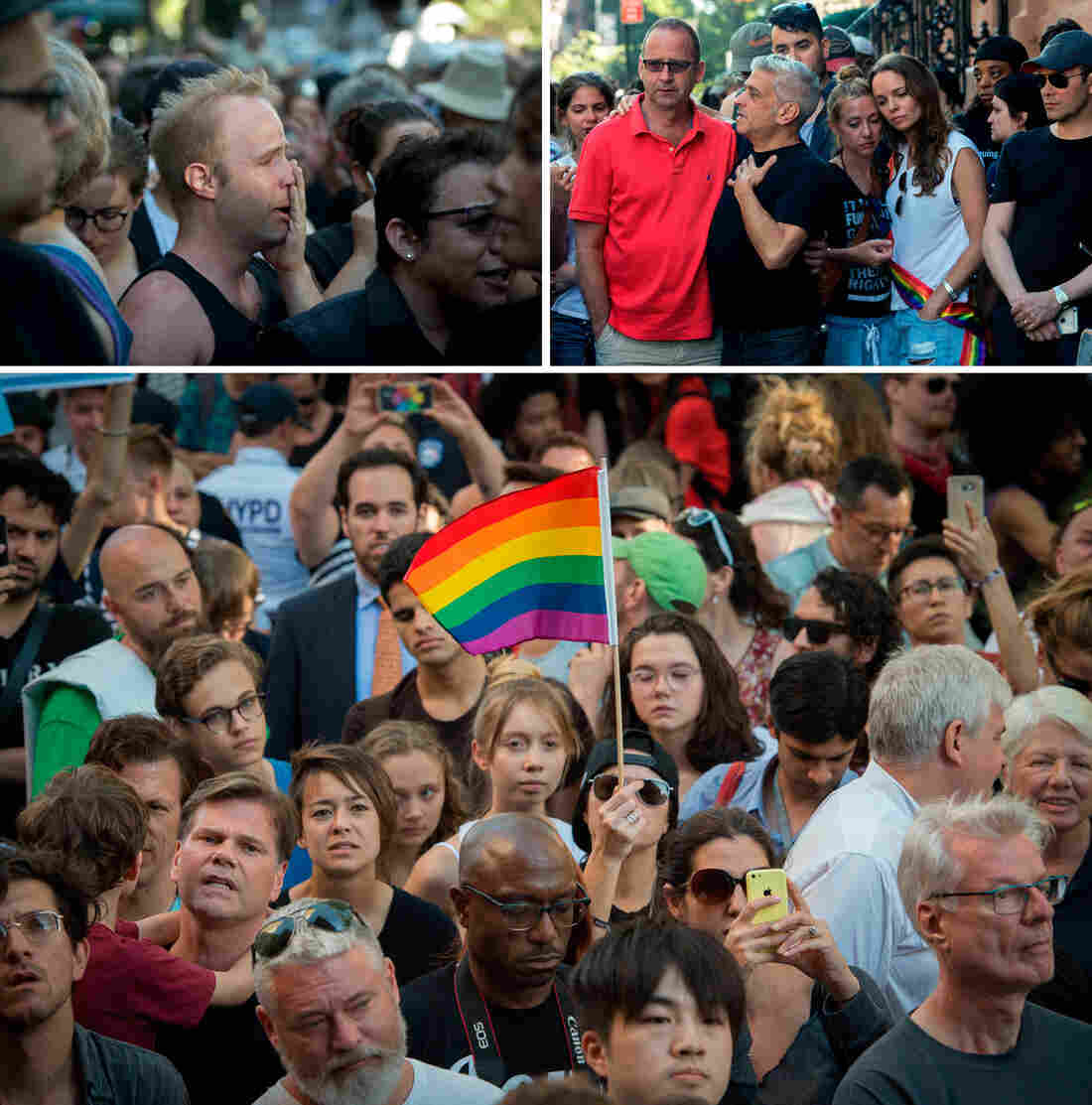 "I feel like it's all the more reason to come out," 18-year-old Nicki Genco-Kamin told the paper. "That's trying to push us back. This is showing we're still here, we're still going to take a stand."

"Your West Coast friends are all with you, Orlando. #ThePrideMustGoOn," LA Pride tweeted.

Thousands of people marched in the parade, "in grief and defiance," the AFP reports. LA Mayor Eric Garcetti marched holding a rainbow flag and a sign saying "We love Orlando," the wire service says.

In New York, a massive vigil formed at the Stonewall Inn, the symbolic birthplace of the gay rights movement.

It was a spontaneous reaction, The Associated Press reports:

"The Manhattan bar became a national symbol of gay rights after a 1969 police raid led to violent street riots.

The vigil at Stonewall Inn: "Together, we will achieve the respect we deserve — love and equality" pic.twitter.com/xkt44NI2od

"Stonewall is 'where we go when things like this happen,' said Andy Humm, host of the 'Gay USA' TV show."

"Gay bars and clubs are supposed to be our safe haven," 48-year-old Milack-Carrasco, joining in at the vigil, told the New York Times. "I've never felt threatened here, but now I'm looking over my shoulder." 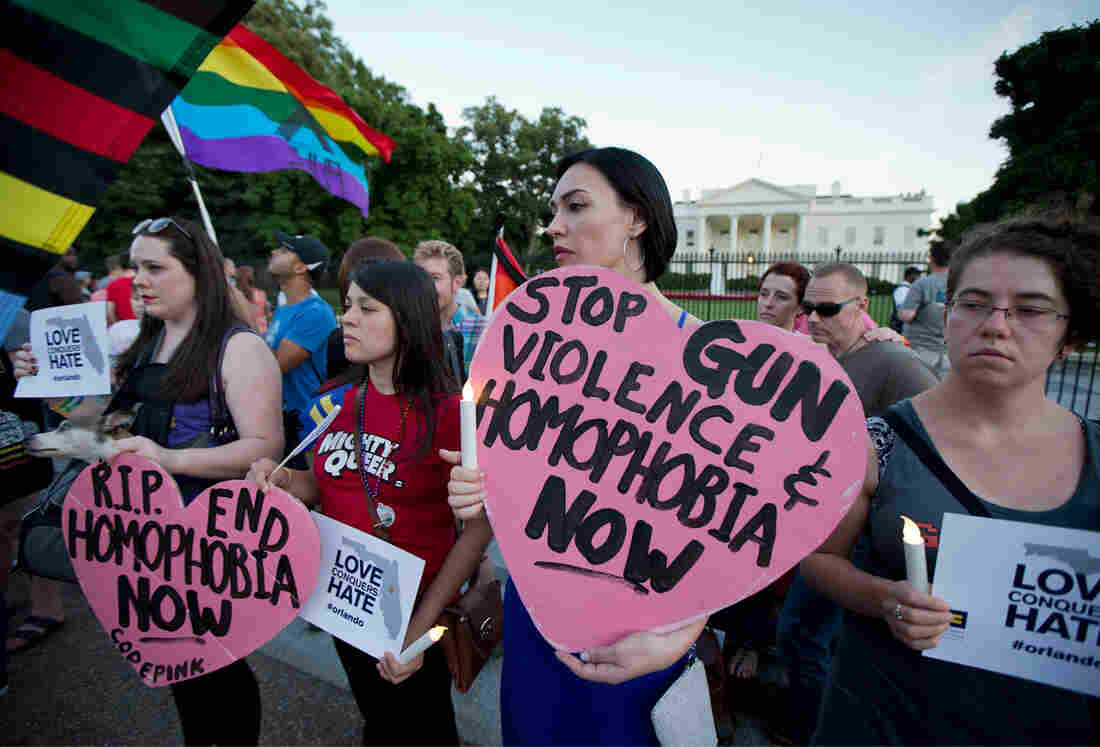 (From left) Rachel Henry, Selene Arciga, Nicolette Gullickson and Joanna Lamstein join others as they gather for a candlelight vigil in front of the White House in Washington on Sunday afternoon. Manuel Balce Ceneta/AP hide caption

Another vigil member, 66-year-old Ron Perry, told the newspaper the Orlando attack "opens up a lot of old wounds. ... It brings back memories of when violence was regular at gay bars."

Counterterrorism police officers stood watch over the vigil. Police had an increased presence at "key LGBT community institutions" across the city, Mayor Bill de Blasio announced. He said there was no credible threat against New York, but that police were on high alert. De Blasio is expected to attend a vigil Monday night at the Stonewall Inn.

In Washington, D.C., Sunday was the last day of a nearly two-week-long series of Pride events.

The festival itself was more somber than planned, the Washington Post reported, with a moment of silence dedicated to the victims. The D.C. Gay Men's Chorus also dedicated a performance to those affected by the attack. 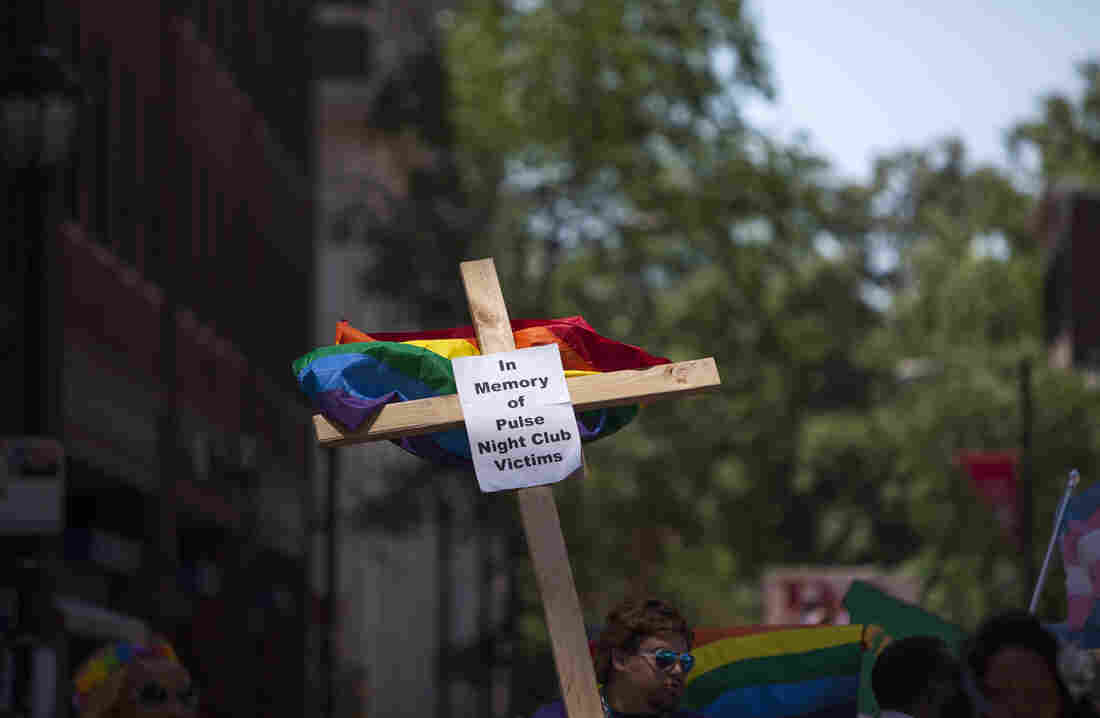 Austin Ellis, a member of Metropolitan Community Church, carries a cross with a sign in memory of the victims of the Pulse nightclub shooting as he marches in the 2016 Gay Pride Parade on Sunday in Philadelphia. Jessica Kourkounis/Getty Images hide caption

Multiple vigils are also planned across the nation's capital, the newspaper reports.

"Pride has always been about celebration," David Mariner, executive director of the DC Center for the LGBT Community, told the Post. "But it's also about community. And I can't imagine a day when our community needs to be together more than this day."

In Milwaukee, which was also hosting a Pride festival this weekend, the festival added metal detectors to admission gates and boosted security, GoPride.com reported. 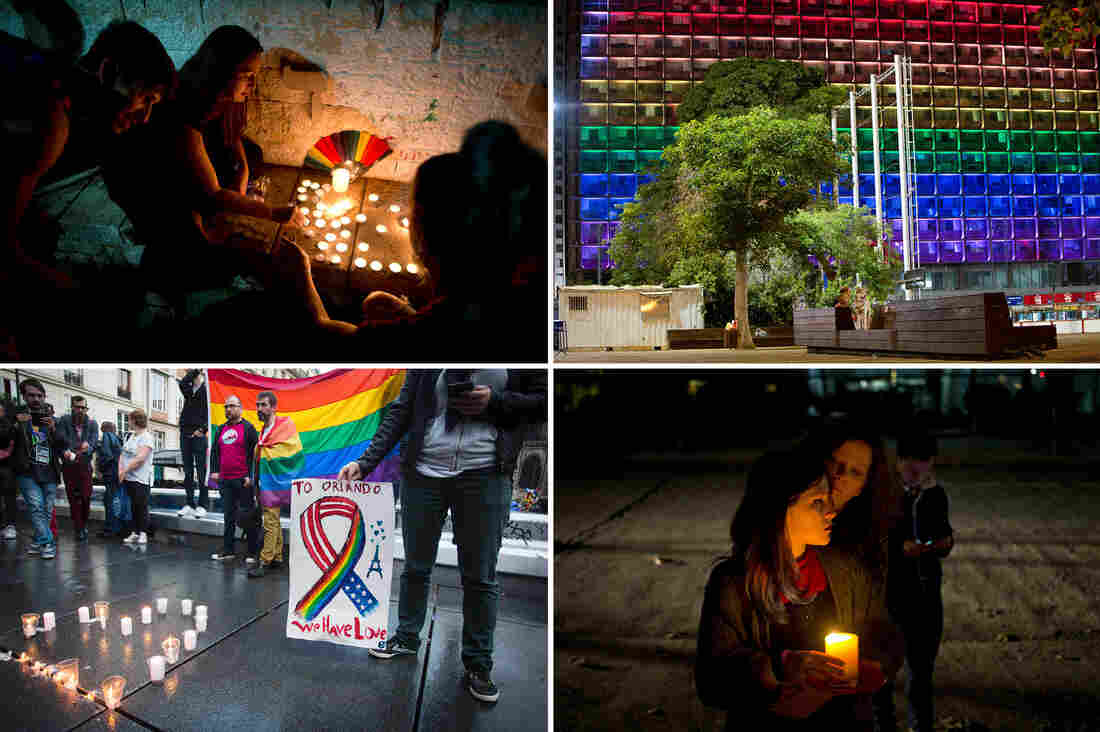 "Today is a day for LGBTQ community solidarity," said Michail Takach, the pride festival's communications director, according to GoPride.co. "While thoughts and prayers are welcome, action is required. Today is a day to come out, to be seen, and to be heard, in honor of those whose day was stolen from them. Today is a day to remember where we started and why we started."

In Philadelphia, the weekend's Pride festival saw security enhanced on the ground and on the water.

Police had a visible presence along the parade route, Philly.com reports, while U.S. Coast Guard vessels monitored the Delaware river behind the Pride Festival grounds.

Security has also been increased at a Pride festival in Detroit, although the city's police chief wouldn't give any details to MLive.

Around the world, cities, institutions and individuals expressed their support for the victims of the worst mass shooting in modern U.S. history.

In Paris, scores of people, some draped in rainbow flags, gathered at Place Igor Stravinsky, the AP reports.

And at the Tony Awards — the annual celebration of Broadway shows — the entire ceremony was dedicated to the victims of the attack.

Lin-Manuel Miranda, who received a Tony for his wildly successful show Hamilton, read a sonnet for the victims. The poem begins in personal territory, before turning to Sunday's "senseless act of tragedy":

My wife's the reason anything gets done
She nudges me towards promise by degrees
She is a perfect symphony of one
Our son is her most beautiful reprise.

We chase the melodies that seem to find us
Until they're finished songs, and start to play
When senseless acts of tragedy remind us
That nothing here is promised, not one day.

This show is proof that history remembers
We live through times when hate and fear seem stronger
We rise and fall, and light from dying embers
Remembrances that hope and love last longer.

Editor's note: We've updated the headline and text to reflect that the Orlando attack represents the deadliest mass shooting in modern U.S. history, rather than in all of U.S. history. You can read more about our thinking here.