Accessibility links
'That Could Have Been Me': A Change Of Plans Spared These Orlando Residents : The Two-Way In the aftermath of the country's deadliest mass shooting, mourning members of the community reflect that they themselves could have been victims.

'That Could Have Been Me': A Change Of Plans Spared These Orlando Residents

'That Could Have Been Me': A Change Of Plans Spared These Orlando Residents 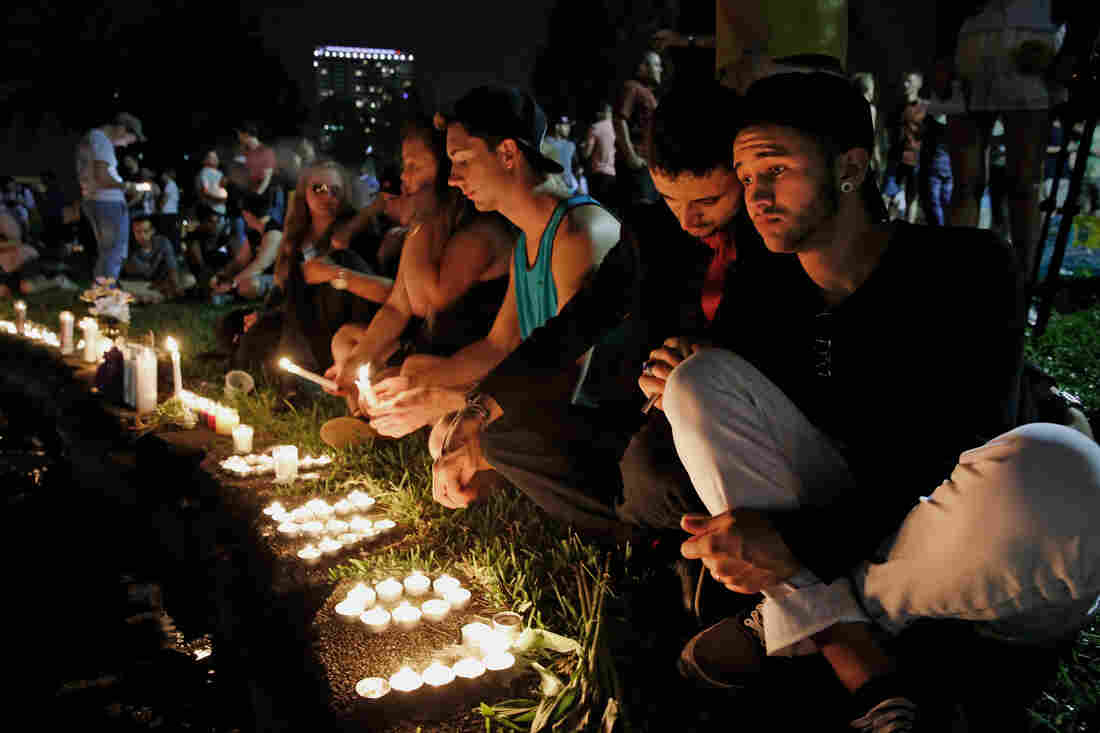 Johnpaul Vazquez (right) and his boyfriend, Yazan Sale, sit by Lake Eola in downtown Orlando, thinking of those killed and injured. "We were supposed to go to the club last night, but I didn't feel right," said Vazquez. Carolyn Cole/LA Times via Getty Images hide caption 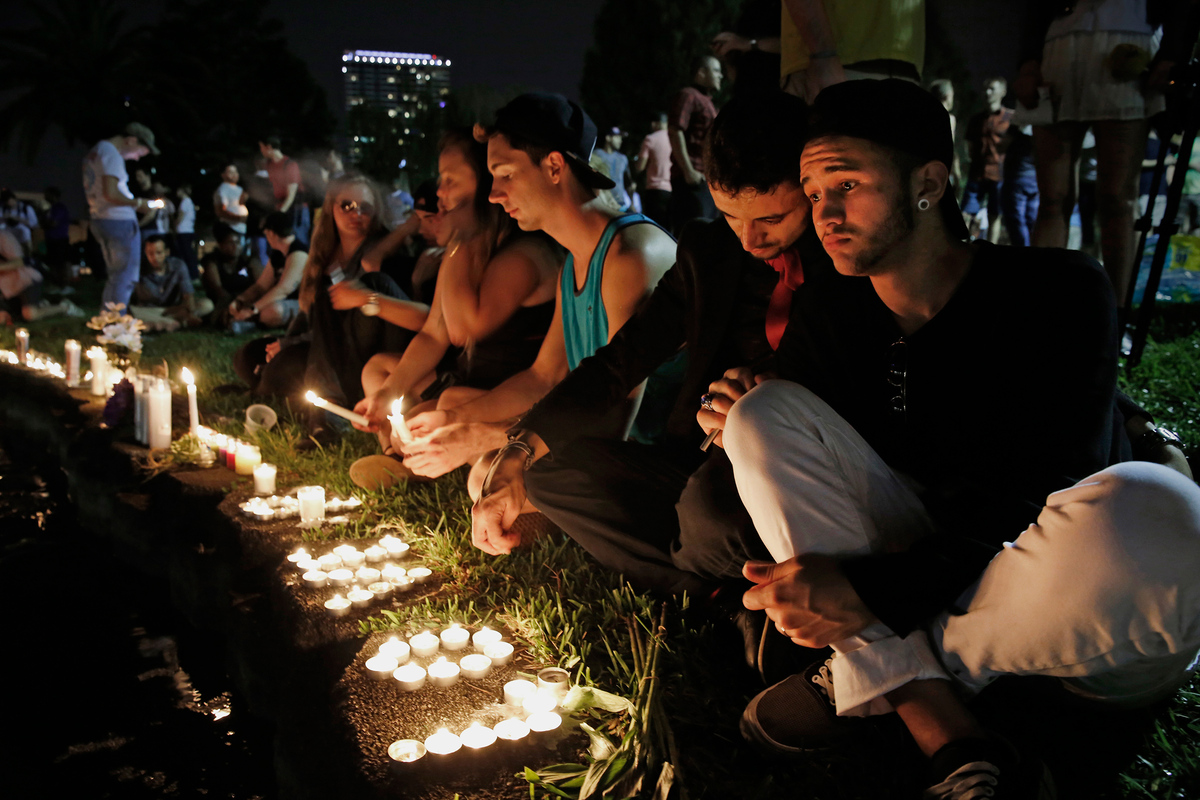 Johnpaul Vazquez (right) and his boyfriend, Yazan Sale, sit by Lake Eola in downtown Orlando, thinking of those killed and injured. "We were supposed to go to the club last night, but I didn't feel right," said Vazquez.

Early Sunday morning, a gunman sprayed bullets across a gay nightclub in Orlando, Fla., killing 49, and the city woke up to the horror of a terrorism-inspired attack on their community. Among the dozens who gathered near Pulse nightclub waiting for word about whether their family members and friends were safe, for some, there was also the sense that they themselves could have just as easily been victims.

"That could have been me," said Robles, 40, who was at Pulse two weeks ago. On Saturday night, she got a call from her friend just before midnight to see if she wanted to meet up at at the club.

But Robles couldn't get a sitter for her daughter on such short notice. "Thank God I didn't go."

Her friend, who went, is safe. But the friend described to Robles the chaos and carnage inside.

"She said it was horrible. She's still nervous, still in shock. She's not talking much," Robles said. "This touches a lot of hearts. Makes us think differently. Do things differently. Just the thought of losing people — it does have a big impact."

Here's What We Know About The Orlando Shooting Victims

Along Orange Avenue in Orlando, a bustling road in an older section of the city, dotted with bars, restaurants, stores and new apartments, Angie Wiechart wanted to place flowers outside the nightclub where, as of Sunday evening, dozens of bodies still remained. But she couldn't.

The crime scene was still active as federal, state and local law enforcement officers continued to piece together what happened inside the club, a longtime staple in the gay community. Nearby neighborhoods, businesses and streets also remained shut down as of late Sunday night.

Many Orlando residents described Pulse as a place where everyone felt welcome. Patrons say it was unusual to see even a fistfight break out.

Nicole Doucette told NPR's Morning Edition that she and her friends were planning to go to Pulse that night — but decided against it last minute.

"I didn't really know what to think when I woke up. I was just devastated. The one place that people come together to feel like they're accepted and not discriminated against is the one place where so many people lost their lives," Doucette said.

"Nobody is different in there," said Lesley Rossner, 42, who is straight. "We are having fun, and we are all friends." 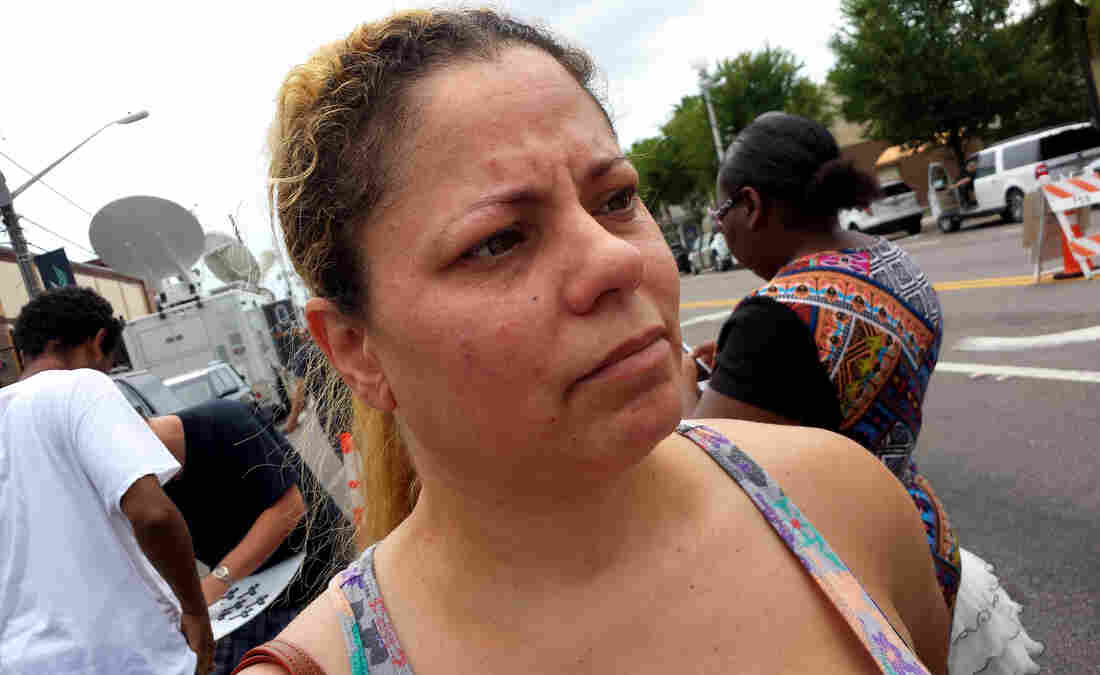 Lesley Rossner, 42, of Orlando waits Sunday to find out the names of the victims killed overnight at the Pulse nightclub in Orlando, Fla. Eileen Holliday for NPR hide caption

And many, like Wiechart, said the Pulse shootings reminded her of the Sept. 11, 2001, attacks.

"It makes you realize you are not really in a safe place," said Wiechart, 41. "Brings life into reality. Brings terrorism close to home and reality. "

After hearing the news about the massacre at the club she visited regularly, college student Diana Nunez immediately jumped in her car and drove for two hours from Gainesville.

When she got there, she broke down in tears and hugged her friend, Caleb Collins. He was supposed to be at Pulse that night but got called into work instead.

"I feel very lucky but just more concerned about the families of the people killed," Collins, 24, said.

As part of the healing, he said, the nation needs to be more accepting of the LGBT community. "I didn't choose to be this way," said Collins, who is gay.

Nunez and Collins both have friends who remain missing, and they're still waiting to hear word. On Monday, officials said they had identified 48 of the 49 victims. "We have to try to stay positive," said Nunez.

Eileen Holliday is a freelance writer based in Orlando: @EileenHolliday