Accessibility links
Shooting In Orlando: Type Of Rifle Used Is Popular With Hobbyists, Easy To Use : The Two-Way The Sig Sauer MCX is similar in appearance and lethality to an AR-15, the gun used in Newtown and Aurora.

The Orlando Killer's Weapon Of Choice Was 'The Ultimate Hunting Rifle'

The Orlando Killer's Weapon Of Choice Was 'The Ultimate Hunting Rifle' 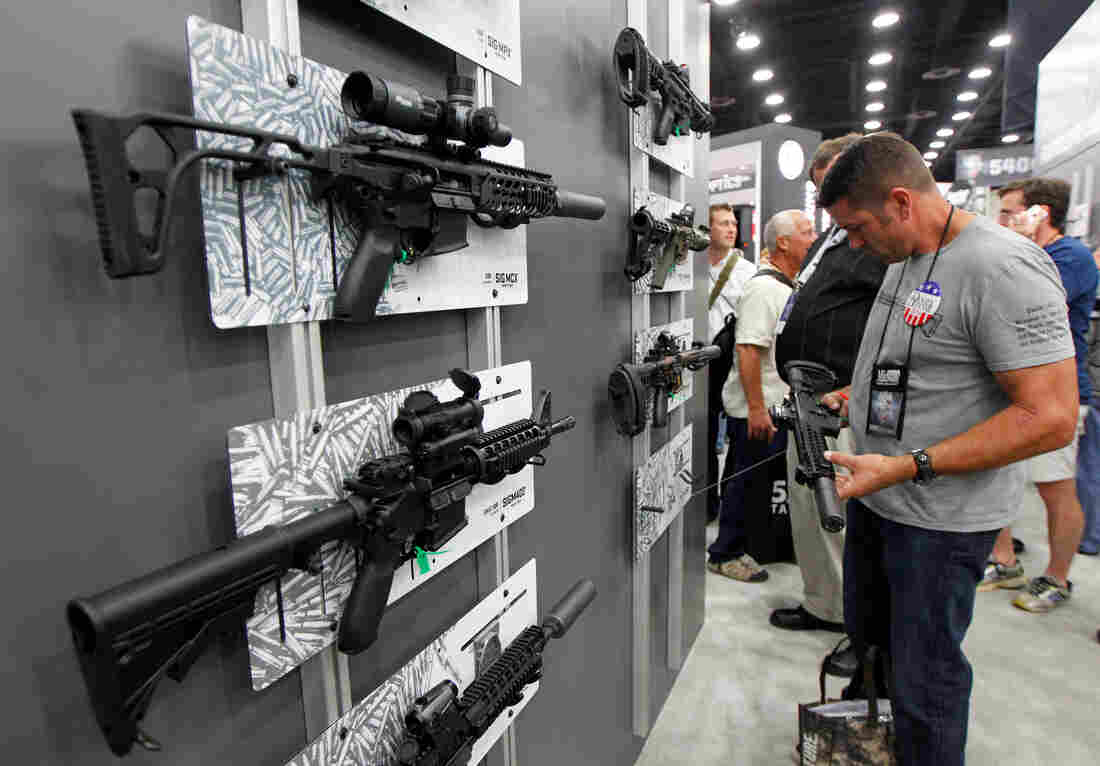 A Sig Sauer MCX rifle can be seen on display at the top left of this photo as NRA gun enthusiasts view the Sig Sauer display at the National Rifle Association's annual meetings & exhibits show in Louisville, Ky., in May. John Sommers II/Reuters hide caption 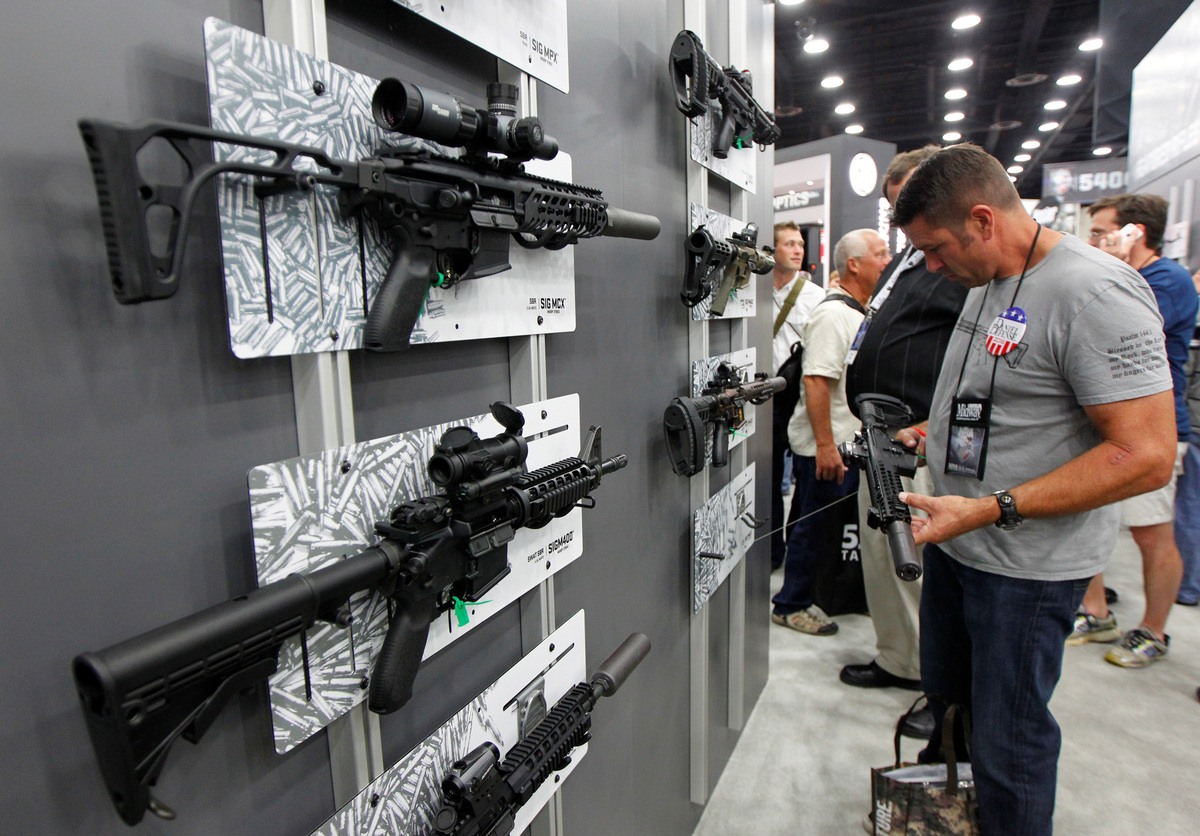 A Sig Sauer MCX rifle can be seen on display at the top left of this photo as NRA gun enthusiasts view the Sig Sauer display at the National Rifle Association's annual meetings & exhibits show in Louisville, Ky., in May.

Editor's note, June 16: An earlier version of this story said Omar Mateen carried an AR-15, based on comments from Orlando Police Chief John Mina, who said Sunday that the gun was an "AR-15-assault-type rifle." Law enforcement officials subsequently told NPR that the gun was a Sig Sauer MCX, a rifle similar to an AR-15 but also different in fundamental ways. This story reflects the change.

The MCX is described by its manufacturer as "the ultimate modern hunting rifle" that is "engineered from the ground up to be short, light and silenced."

It is similar in appearance and lethality to the AR-15, the name given to a very popular family of rifles made and sold by nearly two dozen companies. Law enforcement sources call the MCX an "AR-15 equivalent made by a different manufacturer."

AR-15's were used in some of the most infamous mass murders in recent history, including the 2012 shootings of 20 children and six adults at an elementary school in Newtown, Conn.

They were also used in the killings that same year at a movie theater in Aurora, Colo., and last year's ISIS-inspired shootings at a government office building in San Bernardino, Calif.

The AR-15 is popular with gun owners, in part because it's lightweight and easy to handle. Its long barrel generally makes it shoot more accurately, especially at great distances, and it tends to come with a high-capacity magazine. 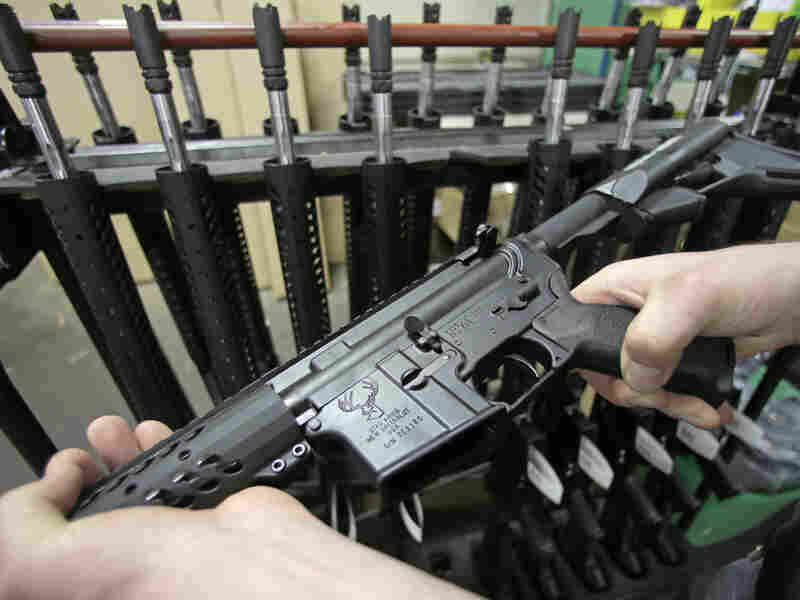 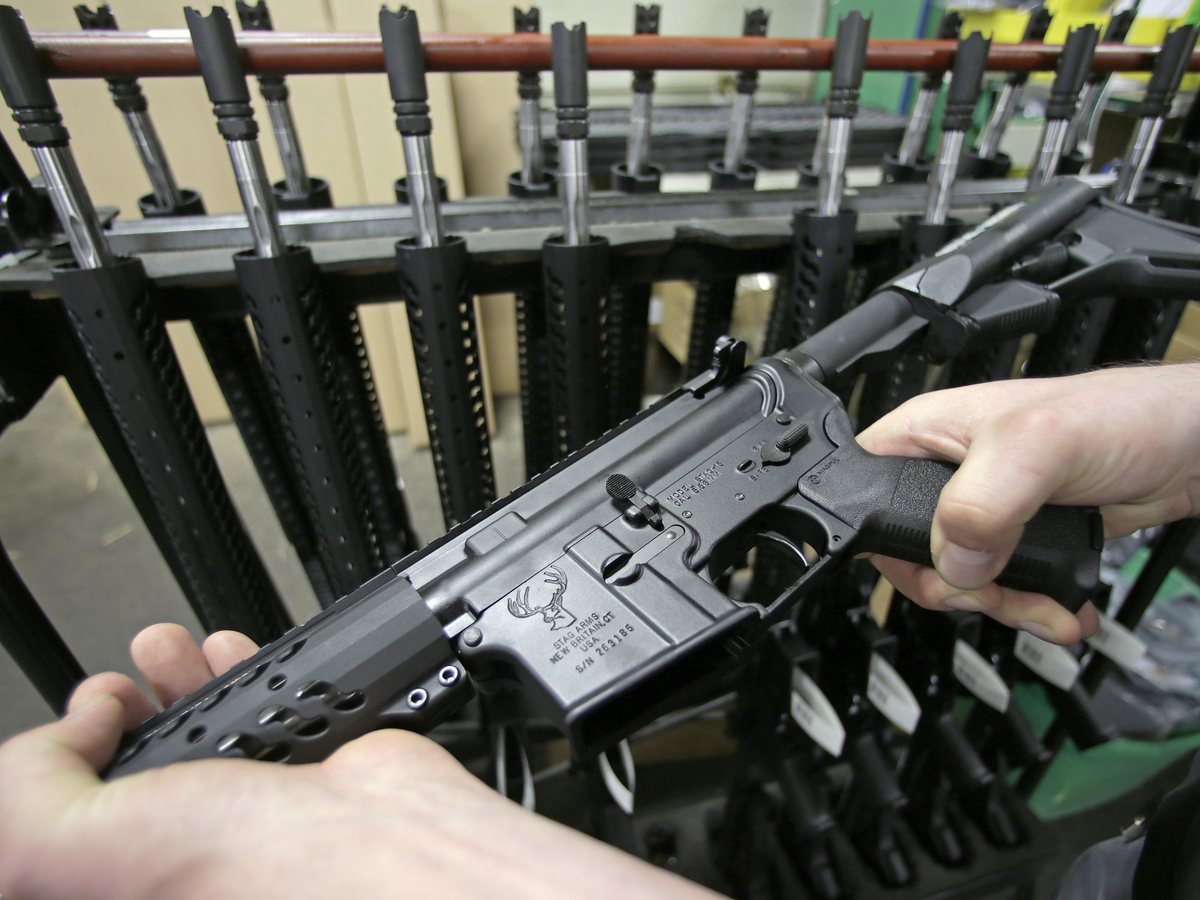 The Sig Sauer MCX shares some characteristics with the AR-15, shown here, but gun experts say it also has fundamental differences."

"They've really caught on, just because of their military styling and because of their ease of use and customization. They're very highly customizable. You can put on your own component parts to it, take things out and easily put new things in. So some people have likened it to the iPhone of guns," says Adam Winkler, professor of constitutional law at UCLA and the author of Gunfight: The Battle over the Right to Bear Arms in America, in an interview with NPR.

Despite its similarities, the MCX is also fundamentally different from an AR-15.

Its internal operating system — its method of propelling bullets from its chamber and cycling to the next round — works differently, and several gun experts contacted by NPR say they do not consider it to be part of the large family of AR-15 rifles.

"With an innovative short-stroke gas piston operating system, users can change barrels, calibers, stocks and handguards in the field," according to a company brochure.

Weapons such as these — often referred to as assault-type rifles — were prohibited by Congress in 1994, but the ban expired a decade later, and since then their popularity has only grown, says Winkler.

Mateen bought the MCX legally, according to the Bureau of Alcohol, Tobacco, Firearms and Explosives. He also carried a 9 mm pistol.

"He is not a prohibited person, so he can legally walk into a gun dealership and acquire and purchase firearms. He did so. And he did so within the last week or so," ATF Assistant Special Agent in Charge Trevor Velinor said Sunday.