Accessibility links
Orlando Gunman Had Been Taken Off Watch List, FBI Director James Comey Says : The Two-Way The man whose attack on a nightclub resulted in the deaths of 49 victims bought his guns legally, James Comey says. The shooter, he adds, also had three different contacts with a 911 dispatch service. 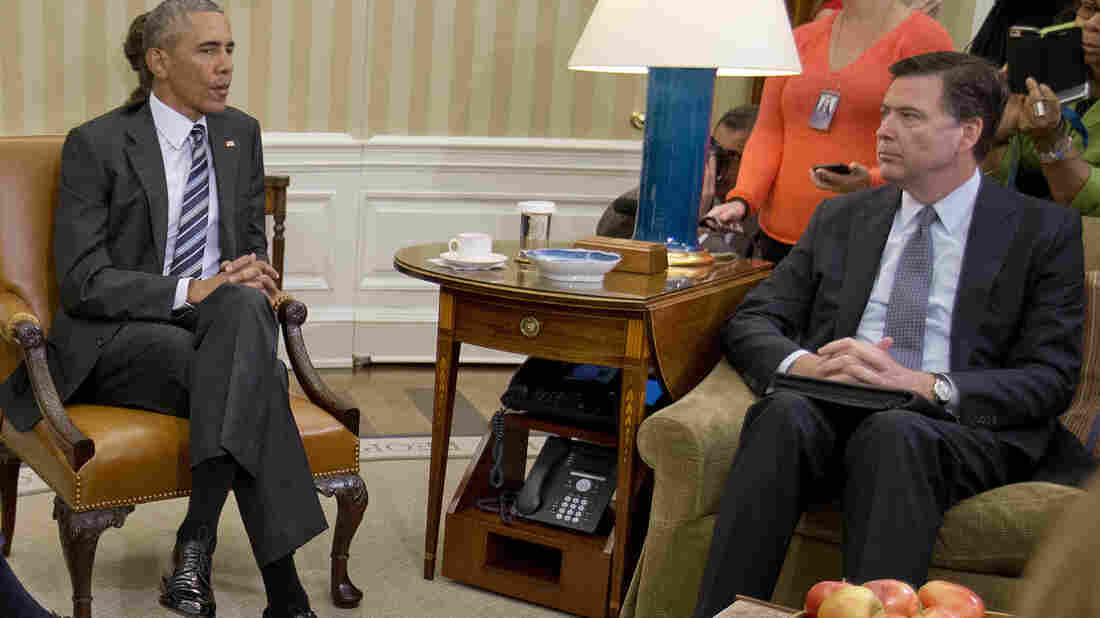 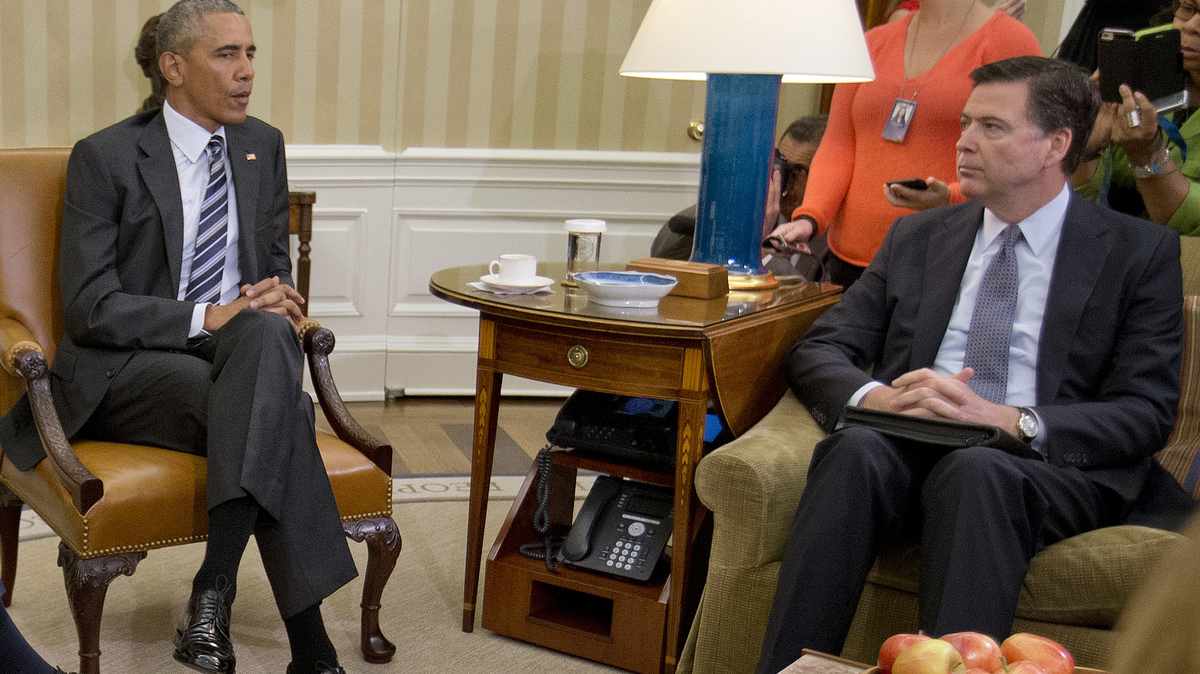 FBI Director James Comey (right) delivered an update on the Orlando Fla., shootings shortly after briefing President Obama on the investigation into the killing of 49 people.

Citing "strong indications of radicalization by this killer" in Sunday's mass shooting at the Pulse Orlando nightclub in Orlando, Fla., FBI Director James Comey said there are conflicting signs about the gunman's motivations — and no sign that he was acting under orders.

Carrie added, "The FBI gets notification when people on the watch list try to buy weapons."

In a midday briefing Monday, Comey also detailed the two times the FBI looked at Mateen, whom authorities have identified as the gunman.

Investigators said Mateen legally bought the two weapons he used in the nightclub attack — an AR-15-style rifle and a handgun — in the past week. Orlando police said a third weapon was found in Mateen's vehicle.

"We are going through the killer's life, especially his electronics," Comey said at the briefing. The goal, he said, is to determine whether anyone was either directing or aiding Mateen — and so far, Comey said, investigators haven't seen anything to suggest the gunman is part of a larger plan or group.

The FBI director also filled in more details about the events in the early hours of Sunday. The first shots were reported around 2 a.m. ET; Comey said that beginning around 2:30 a.m., the gunman made or received three calls with the local 911 service. In one, the gunman called and hung up. In the second, he called and spoke only briefly to the operator. But in the third, in which the operator called the gunman back, Mateen apparently spoke more fully.

That call, Comey said, introduced conflicting information to the investigation, as Mateen claimed to be pledged to ISIS. But he also said he was inspired by the bombers who attacked the Boston Marathon (and who did not affiliate themselves with ISIS), as well as a Florida man who carried out a suicide bombing for the al-Nusra Front in Syria, a rebel group that has frequently clashed with ISIS.

In addition to radical motivations, Comey said the FBI is considering whether the gunman was acting out against gays in particular because of his own anti-gay sentiments. The Pulse nightclub has been a key part of the local LGBT community, as The Two-Way has reported.

Comey also ran through Mateen's previous contacts with the FBI, which had twice turned its attention to the man now believed to have killed 49 people.

The first was in May 2013, Comey said, when Mateen, who was then working as a contract security guard at a courthouse, claimed to have ties to both al-Qaida and Hezbollah. That sparked a nearly yearlong investigation in which agents introduced confidential sources to Mateen, followed him and sought anything that could tie him to more substantial threats.

During the FBI's 10-month inquiry, agents spoke to Mateen twice; Comey said that in the end, Mateen explained his earlier statements by saying he had been angry over what he called teasing and discrimination from his coworkers.

In July 2014, agents again looked at Mateen as they investigated anyone with ties to suicide bomber Moner Mohammad Abu-salha — particularly because both of them had attended the same mosque in Florida. The two knew each other casually, Comey said.

Comey added that "no ties of consequence" were found between the two men — and that agents were further reassured when a person said that while they had once been concerned that Mateen might become radicalized, those concerns dissipated after Mateen got married, had a child and found steady work.

As for the question of whether FBI agents should have done anything differently, Comey said, "So far, the honest answer is, I don't think so."

He then urged the public to not be fearful, but to be vigilant about possible security concerns and report them to the authorities.

"In every single one of our cases, as we look back, somebody always sees something that they should have told us, and they didn't," Comey said.