Accessibility links
Reports: Gunman Had Visited Nightclub Before, Used Gay Dating Apps : The Two-Way Multiple people have told the media they recognized Omar Mateen, who killed 49 people at the gay club Pulse in Orlando on Sunday morning, from previous nights at the club or from gay dating apps. 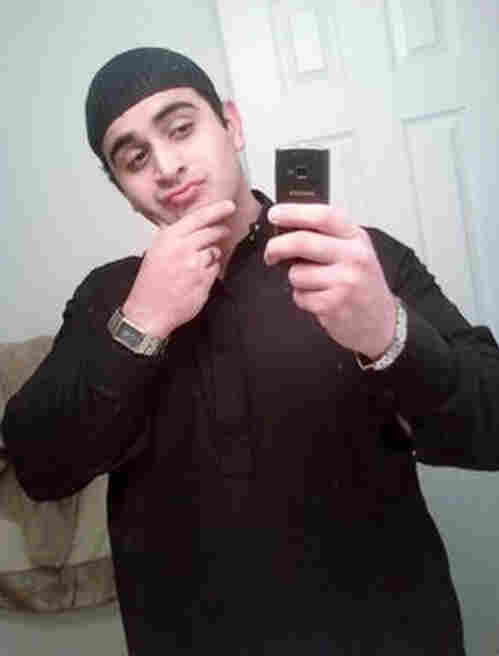 Omar Mateen, who authorities say killed 49 people at the gay nightclub Pulse in Orlando, Fla., was reportedly no stranger to the club.

Multiple media outlets are reporting that some Pulse regulars recognized Mateen, saying that he had spent time at the nightclub before the shooting early Sunday. Witnesses have said the same to authorities, NPR's Dina Temple-Raston reports, citing U.S. officials with knowledge of the investigation.

Meanwhile, at least two men have told the media they interacted with Mateen on gay dating apps. Investigators have not commented on the claims.

The reports are a reminder of how little is known about Mateen's background and motivations.

The Orlando Sentinel writes that "at least four regular customers" at Pulse said they had seen Mateen before.

Ty Smith told the paper that Mateen would sometimes "get so drunk he was loud and belligerent." Smith and his husband, Chris Callen, also spoke to The Canadian Post and said they had seen Mateen at Pulse multiple times. They noted that straight people patronized the club as well as gay people, and wouldn't speculate on Mateen's sexuality.

'He Lived In His Truth': Remembering Those Murdered In Orlando

Type Of Rifle Used In Orlando Is Popular With Hobbyists, Easy To Use

"He couldn't drink when he was at home — around his wife, or family. His father was really strict," Smith said.

"He's been going to this bar for at least three years," Callen said.

Smith and Callen decided to keep their distance from Mateen after they saw him pull a knife at Pulse and threaten another patron, they told the Canadian news agency.

Another Pulse regular, Kevin West, told the Los Angeles Times he hadn't seen Mateen at the club until shortly before the shooting. But he recognized him — from Jack'd, a gay dating and chat app.

"As soon as West saw photos of Mateen released after the shooting, he said, he drove to his local police station, where officers summoned FBI officials, who showed him a photo of Mateen on a computer screen.

" 'I said, "That's him," ' West said, and turned over his phone and Jack'd log-in information to the FBI, which still had the phone late Monday, he said."

"I recognized him off Grindr," Cedeno told MSNBC.

Investigators are currently looking into the reports of Mateen's prior visits to Pulse and use of gay dating apps, which have not been officially confirmed.

In general, NPR's Jeff Brady notes, Mateen's motivations remain murky. "Maybe he was someone who was in the closet, maybe he had other motivations," Jeff said Tuesday morning. "We just don't know."

"It's not clear whether he was making these connections — if he in fact did so — in order to case the place for a possible attack or for some other motive," NPR's Carrie Johnson said.

Carrie notes that investigators are also trying to sort through Mateen's claim of allegiance to the Islamic State, and possible expressions of support for other terrorist groups.

"Investigators and the FBI director right now say this guy seems to be very confused, with strange affiliations that are inconsistent with different terrorist groups, and there may be a psychological health issue going on here as well," Carrie says.