Accessibility links
Judge In Stanford Sexual Assault Trial Removed From New Case : The Two-Way The district attorney says he's not confident that Judge Aaron Persky can be fair in the unrelated case. Critics want to recall the judge who sentenced Brock Turner to six months for sexual assault. 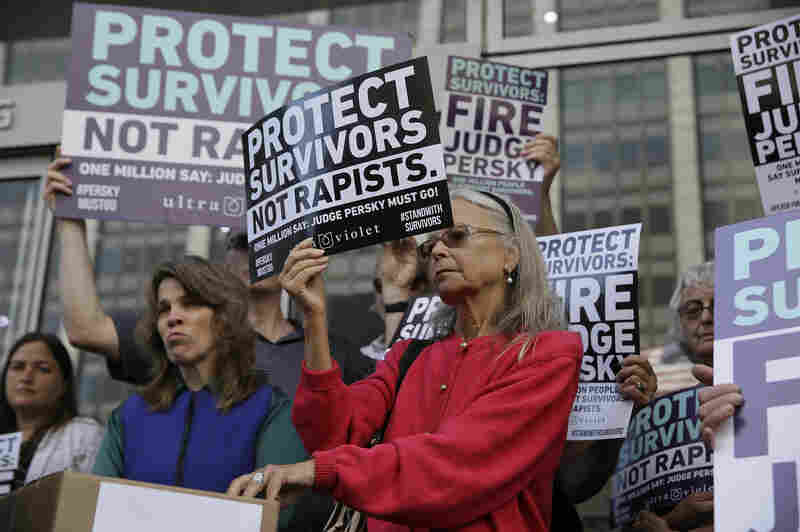 Activists from UltraViolet, a national women's advocacy organization, hold a rally Friday in San Francisco before delivering more than 1 million signatures to the California Commission on Judicial Performance calling for the removal of Judge Aaron Persky from the bench. Eric Risberg/AP hide caption

The California judge who issued what critics called a lenient sentence to a former Stanford University swimmer convicted of sexual assault has been removed from hearing an unrelated sexual assault case.

Santa Clara District Attorney Jeff Rosen filed a peremptory challenge Tuesday against Superior Court Judge Aaron Persky preventing him from deciding whether a former Kaiser Permanente surgical nurse should be tried for the alleged sexual assault of a sedated patient.

Rosen removed Persky a day after the judge abruptly dismissed charges against a San Jose woman in an unrelated misdemeanor theft trial. Apparently for Rosen, Judge Persky's decision in that case was the last straw.

"We are disappointed and puzzled at Judge Persky's unusual decision to unilaterally dismiss a case before the jury could deliberate," Rosen said in a prepared statement. "After this and the recent turn of events, we lack confidence that Judge Persky can fairly participate in this upcoming hearing in which a male nurse sexually assaulted an anesthetized female patient."

Persky is the subject of a recall campaign following his sentencing of former Stanford swimmer Brock Turner earlier this month to six months in jail for sexually assaulting an unconscious woman behind a dumpster outside a frat party. Persky imposed the sentence despite prosecutors' recommendation of a six-year prison term and it sparked widespread outrage by critics who said Persky, a Stanford alum, gave Turner a slap on the wrist. Turner is expected to serve only three months and must register as a sex offender.

The sentence was so unpopular that at least 10 prospective jurors in yet another unrelated case last week asked Persky to release them from jury duty because they said they could not serve under him.

In his statement, District Attorney Rosen said his decision to remove Persky was "a rare and carefully considered step for our office" and he left open the possibility that he would seek to disqualify the judge in future cases.

"In the future, we will evaluate each case on its own merits," Rosen said, "and decide if we should use our legal right to ask for another judge in order to protect public safety and pursue justice."

Stanford law professor Michele Dauber, who spearheaded the recall campaign, said in an email: "This is a further sign that there are serious concerns about Judge Persky's ability to fairly preside over sexual assault cases. This is simply additional evidence that we need to bring this issue to the voters of Santa Clara county so that they can weigh in on whether he is the best candidate to serve in that judicial seat."

Persky could not be reached for comment on Tuesday evening.