Accessibility links
PHOTOS: Thousands Protest Against U.S. Military Presence In Okinawa, Japan : The Two-Way Tens of thousands of people demonstrated against the heavy U.S. military presence on the island of Okinawa, Japan, after an American allegedly raped and killed a local woman. 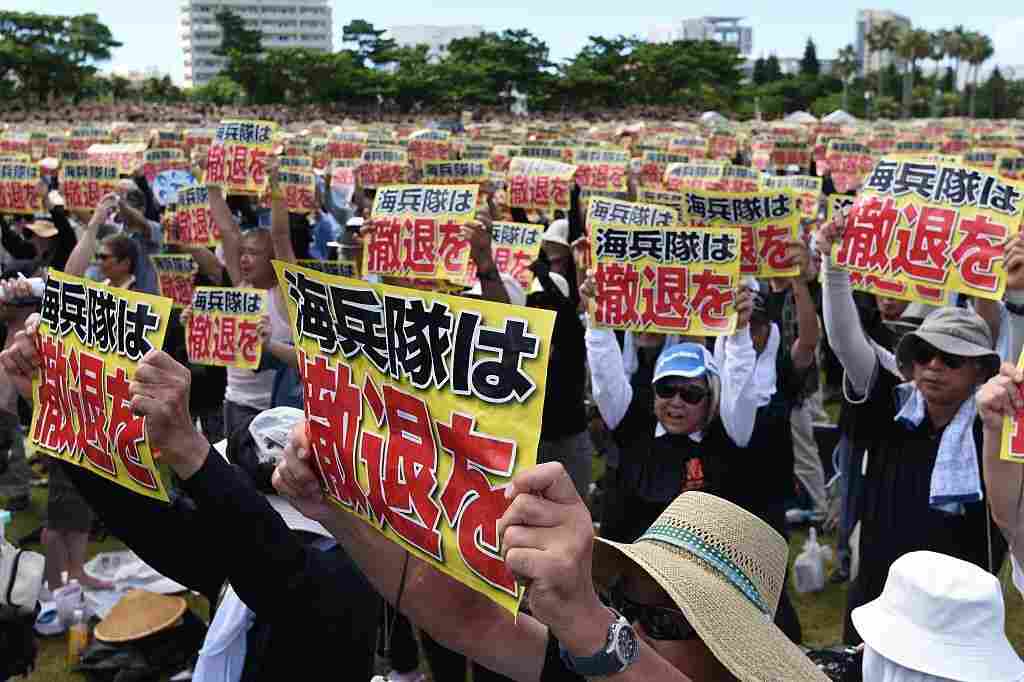 Demonstrators hold placards that read "Withdraw Marine Corps" during a rally against the US military presence in Naha, Okinawa prefecture on Sunday, following the alleged rape and murder of a local woman by a former U.S. marine employed on the U.S. military base. Toru Yamanaka /AFP/Getty Images hide caption 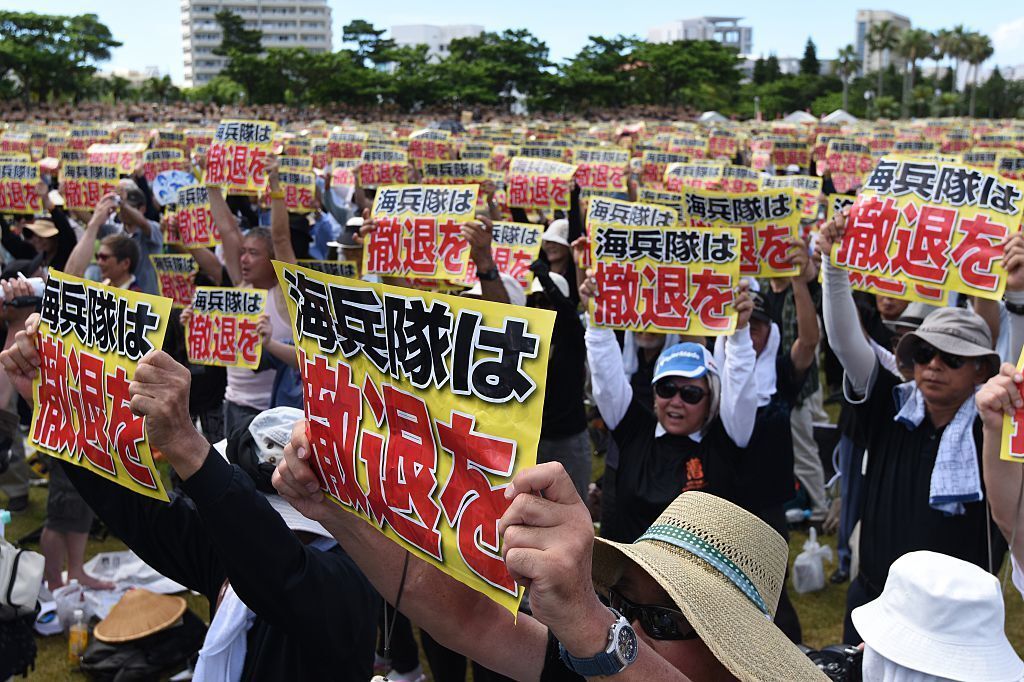 Demonstrators hold placards that read "Withdraw Marine Corps" during a rally against the US military presence in Naha, Okinawa prefecture on Sunday, following the alleged rape and murder of a local woman by a former U.S. marine employed on the U.S. military base.

Tens of thousands of people are demonstrating against the heavy U.S. military presence on the island of Okinawa, Japan.

It's "one of the biggest demonstrations in two decades" against the U.S. military bases on the island, Reuters reports, and comes after an American allegedly raped and killed a local woman named Rina Shimabukuro.

The crowds of demonstrators weathered sweltering heat, brandishing signs with slogans like "Marines, Withdraw" and "Our anger has reached the limit."

"I'm filled with sadness and I really don't want any more victims," protester Chihiro Uchimura, 71, told The Japan Times. "As long as there are U.S. military bases, this kind of incident will continue to happen."

Some 26,000 U.S. troops are stationed on Okinawa, the BBC reported, and there have long been tensions with the local community.

As NPR's Elise Hu explained, the case at the center of today's protest "involves a former U.S. Marine who worked on an Okinawa military base. Investigators say the 32-year-old man strangled his victim before stuffing her body in a suitcase."

When President Obama met with Japanese Prime Minister Shinzo Abe during his visit to the country last month, Abe told reporters that he "firmly lodged a protest" with Obama. The two leaders spent the entire time talking about Shimabukuro's killing, Abe said. 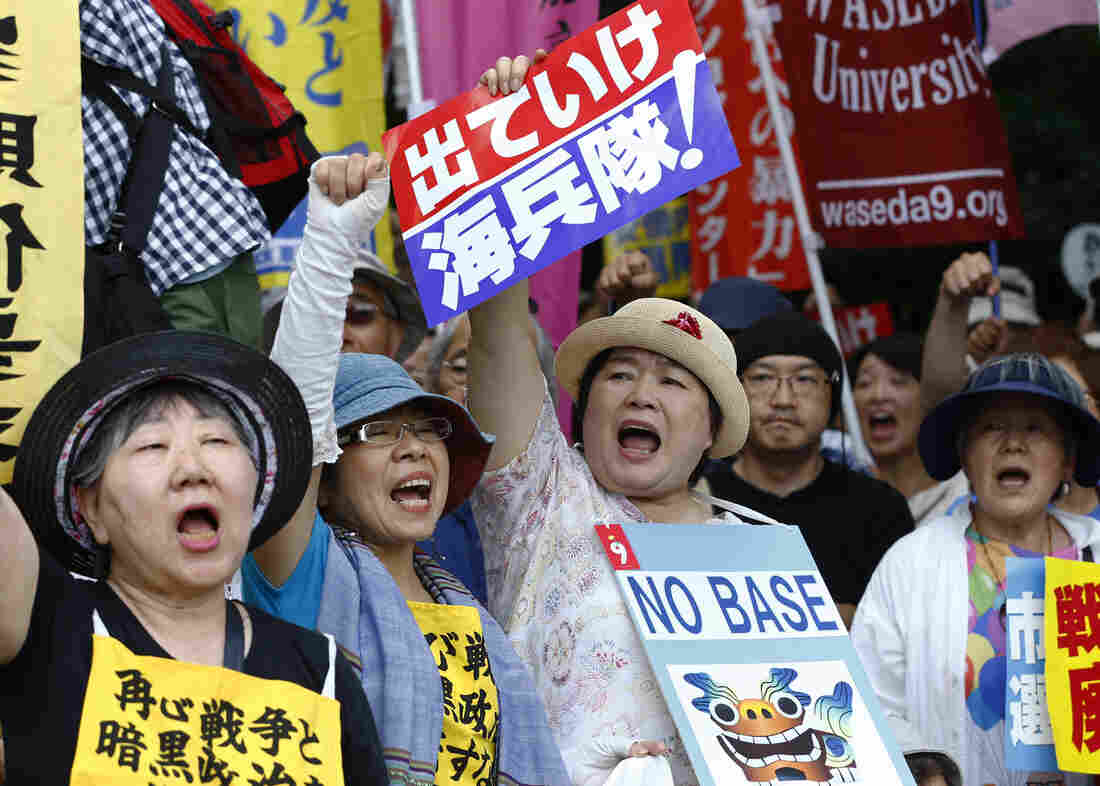 This isn't the first incident of its kind. "It really started back in 1995, when there was a gang rape of a 12-year-old schoolgirl," Jeff Kingston, head of the Asian Studies department at Tokyo's Temple University, told Elise. "And that ignited massive demonstrations all over Okinawa. Since then, there have been a number of other similar type of crimes." He added:

"Okinawans have had enough. They're fed up and they want Tokyo and Washington to do more to protect the local people against the over-presence of American military in what's often called a 'Cold War island.' " 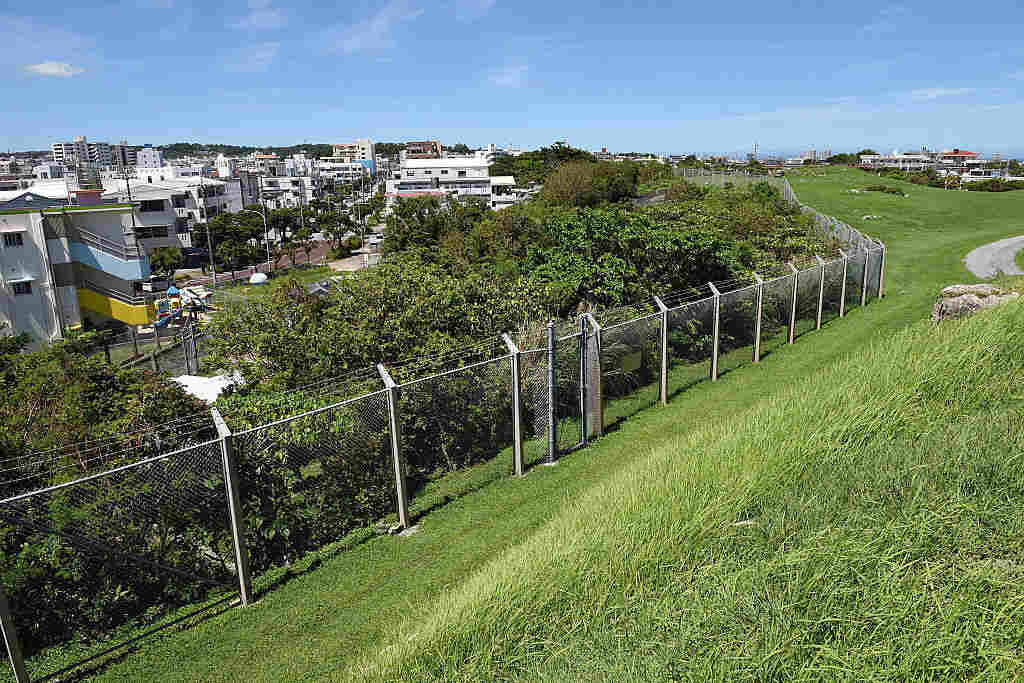 Beyond the barbed-wire fence at Marine Corps Air Station Futenma, Okinawans live in the dense building construction of Ginowan, where the city has grown around the military installation. McClatchy DC/TNS via Getty Images hide caption

Marine Corps Air Station Futenma is located in a crowded residential area. After the 1995 gang rape, the U.S. and Japan reached an agreement to close it, as The Associated Press reported. However, "that plan has been put on hold because residents near the proposed relocation site oppose the move, worrying about noise, pollution and crime," the wire service said. 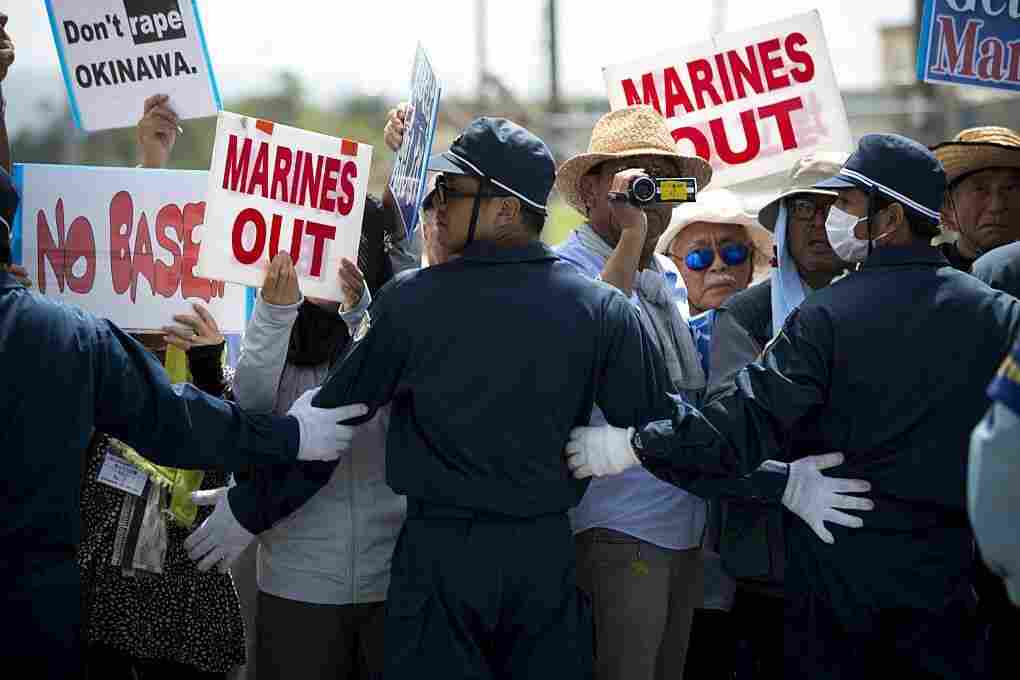 Okinawa Governor Takeshi Onaga wants to see that base relocated off the island, which has a land mass less than 1 percent of Japan's. As Elise reported, it is home to 70 percent of all U.S. bases in the country – a fact that some Okinawans argue is an oversized burden for the small island.

The military has tried to tackle the issue over the years by imposing "a number of measures, such as curfews, sensitivity training and limits to off-base drinking that have significantly reduced the rate of crime," as the Stars and Stripes reported last month.

However, the paper reported that the military "may be facing a no-win situation." It added: "For many Okinawans, every crime is an affront that symbolizes resentment over the disproportionately large U.S. military presence on Okinawa and the prefecture's complicated relationship with the rest of the country."

First Lt. George McArthur, a Marine Corps spokesman on Okinawa, told Stripes that "it is important to note that the overwhelming majority of American servicemembers, dependents and civilian employees are law abiding, honorable and respectful."

As Elise reported, military personnel stationed on Okinawa can deploy anywhere in the Pacific in under six hours. "This is very, very stable, peaceful region," Col. Peter Lee, the U.S. commander, told Elise. "And our 70 years of presence here has undergirded that."