Accessibility links
Partial Transcripts Of Orlando Gunman's 911 Calls Show Vows And Threats : The Two-Way Toward the end of the standoff, survivors of the attack told police "the shooter said he was going to put four vests with bombs on victims within 15 minutes," the FBI says. 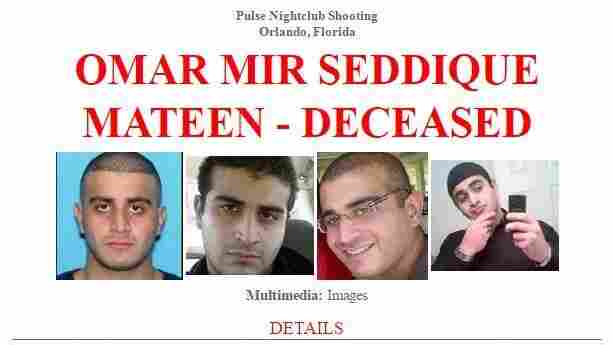 Federal investigators are still filling in details about Omar Mateen; the FBI released partial transcripts of the gunman's calls with police during the June 12 shooting at the Pulse nightclub. FBI hide caption 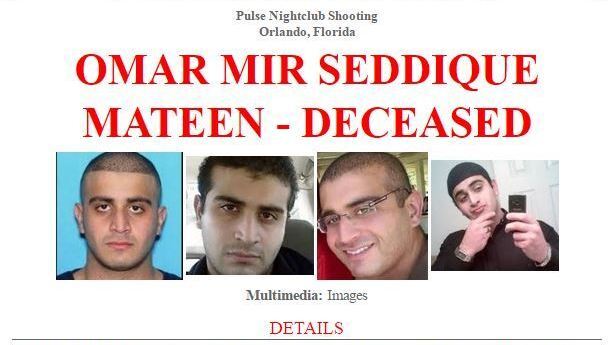 Federal investigators are still filling in details about Omar Mateen; the FBI released partial transcripts of the gunman's calls with police during the June 12 shooting at the Pulse nightclub.

During his three-hour attack on an Orlando nightclub, gunman Omar Mateen spoke to police negotiators for nearly 30 minutes, according to partial transcripts that the FBI released Monday. But his victims — people trapped in the club — were also on their phones, detailing the situation for police.

Toward the end of the standoff, survivors of the attack also told police "the shooter said he was going to put four vests with bombs on victims within 15 minutes," the FBI says.

The agency says that while it won't release audio or transcripts of communications from victims inside the club, "significant information obtained from those victims allowed [Orlando Police] to gain knowledge of the situation inside Pulse."

After the FBI initially released redacted versions of the phone transcript, the agency and the Justice Department has now "re-issued the complete transcript" — one that includes references to ISIS and its leader.

You can read our separate post about that development; here's the government's explanation for the change:

"Unfortunately, the unreleased portions of the transcript that named the terrorist organizations and leaders have caused an unnecessary distraction from the hard work that the FBI and our law enforcement partners have been doing to investigate this heinous crime."

In releasing the partial transcripts, U.S. Attorney Lee Bentley said that the materials should be viewed as an aid to understanding the situation that police confronted, saying "lives were saved because of their heroic work."

Bentley and other local and federal officials spoke at a news conference Monday morning, providing more details and an expanded timeline of the June 12 attack.

As we've previously reported, Mateen threatened to use explosives, including a car bomb and a suicide vest. Investigators say they didn't find those items in or outside the club. In the calls, Mateen also identified himself as"an Islamic soldier" who pledged allegiance to a terrorist group, FBI Assistant Special Agent in Charge Ron Hopper said Monday.

Throughout the calls, Hopper says, Mateen spoke in a "chilling, calm and deliberate manner."

During a three-hour span between the time Mateen opened fire on unarmed civilians and when he was killed, "there was no gunfire," Orlando Police Chief John Mina told reporters at Monday's news conference. He added, "our officers were intermittently in and out of that club, saving people, rescuing people from inside the club."

A key name is missing from the official text, that of ISIS, the terrorist group to which Mateen reportedly pledged allegiance in the call. The term was redacted, in a move Attorney General Loretta Lynch discussed Sunday. Because of the unique circumstances surrounding the transcripts, we'll acknowledge:

"NPR and nearly 40 other news organizations last week asked the city of Orlando to release tapes of the 911 calls, dispatch calls, scanner recordings and other records related to the shooting. Those organizations have yet to respond to the decision to release edited transcripts."

Law enforcement officials say the FBI is almost finished with its investigation of the crime scene, and that it will return the area to the surrounding community early this week. They also restated a previous finding: that there was no evidence that Mateen was acting under the direction of a foreign terrorist group.

The partial transcripts were released along with an updated timeline of that night --- all of it, the FBI says, based on radio communications within the Orlando Police Department. The agency also notes that the times mentioned are approximate.

2:08 a.m.: Officers from various law enforcement agencies made entrance to Pulse and engaged the shooter.

2:35 a.m.: Shooter contacted a 911 operator from inside Pulse. The call lasted approximately 50 seconds, the details of which are set out below:

OD: Emergency 911, this is being recorded.

OM: In the name of God the Merciful, the beneficial [in Arabic]
OD: What?

OM: Praise be to God, and prayers as well as peace be upon the prophet of God [in Arabic]. I let you know, I'm in Orlando and I did the shootings.

OM: I pledge allegiance to [omitted] may God protect him [in Arabic], on behalf of [omitted].

OD: Alright, where are you at?

"In these calls, the shooter, who identified himself as an Islamic soldier, told the crisis negotiator that he was the person who pledged his allegiance to [omitted], and told the negotiator to tell America to stop bombing Syria and Iraq and that is why he was 'out here right now.' When the crisis negotiator asked the shooter what he had done, the shooter stated, 'No, you already know what I did.' The shooter continued, stating, 'There is some vehicle outside that has some bombs, just to let you know. You people are gonna get it, and I'm gonna ignite it if they try to do anything stupid." Later in the call with the crisis negotiator, the shooter stated that he had a vest, and further described it as the kind they "used in France." The shooter later stated, 'In the next few days, you're going to see more of this type of action going on.' The shooter hung up and multiple attempts to get in touch with him were unsuccessful.

"4:21 a.m.: OPD pulled an air conditioning unit out of a Pulse dressing room window for victims to evacuate.

(While the FBI will not be releasing transcripts of OPD communication with victims, significant information obtained from those victims allowed OPD to gain knowledge of the situation inside Pulse.)

4:29 a.m.: As victims were being rescued, they told OPD the shooter said he was going to put four vests with bombs on victims within 15 minutes.

(An immediate search of the shooter's vehicle on scene and inside Pulse ultimately revealed no vest or improvised explosive device.)