Accessibility links
Marines Confirm Decades-Old Case Of Mistaken Identity In Iwo Jima Photo : The Two-Way The iconic photograph, taken during one of the bloodiest battles of World War II, depicts Pvt. 1st Class Harold Schultz among others — not Navy Corpsman John Bradley, as was originally thought. 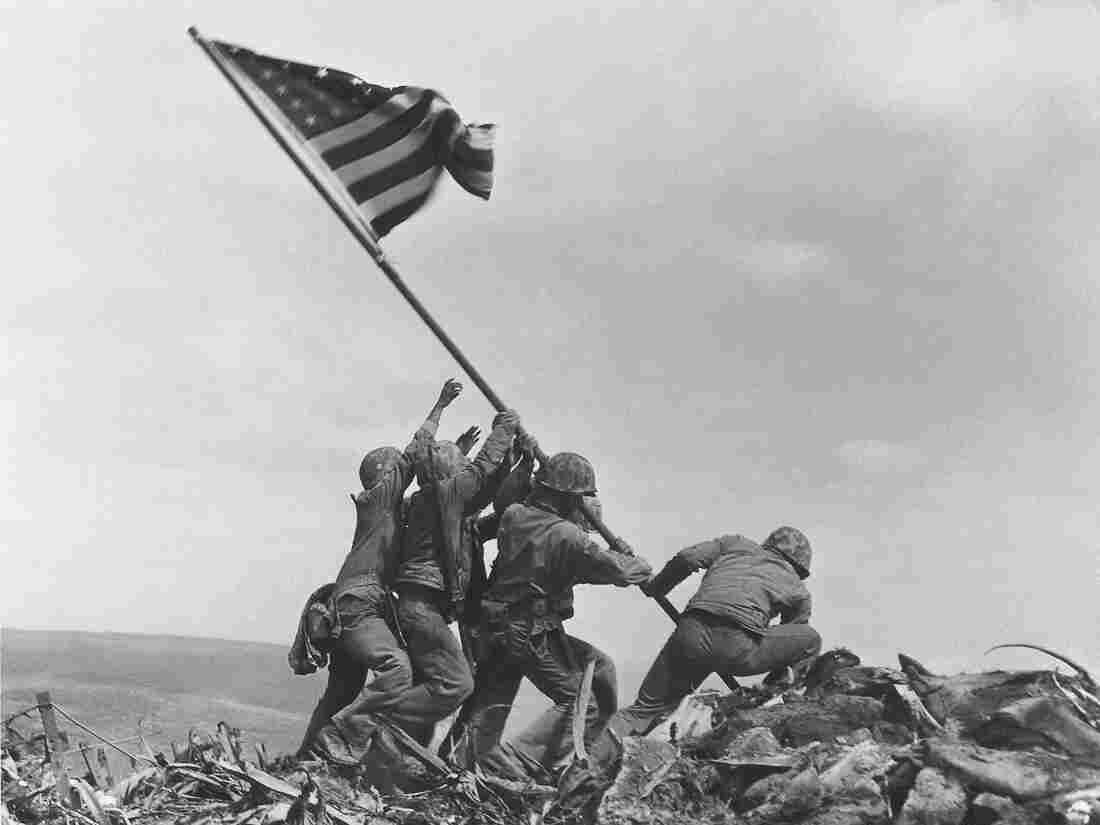 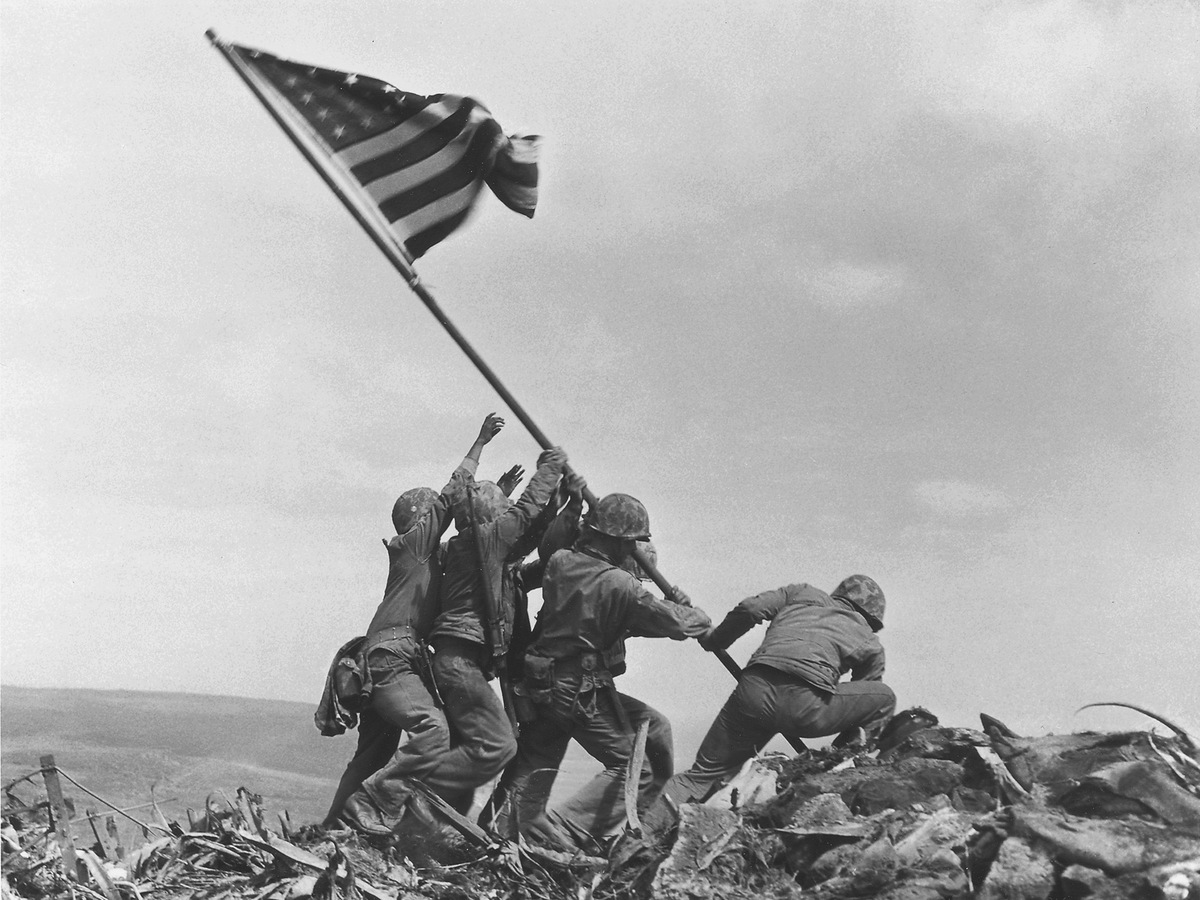 Marines of the 28th Regiment, 5th Division raise the U.S. flag atop Mount Suribachi on Iwo Jima on Feb. 23, 1945. After more than seven decades, Navy Corpsman John Bradley's name will be replaced in captions with the name of Pvt. 1st Class Harold Schultz.

The photograph has been ingrained in American culture since almost the moment it was taken — a steadfast presence in high school textbooks and an enduring symbol of U.S. perseverance. But it appears we've been wrong about Joe Rosenthal's Pulitzer Prize-winning image of the flag-raising on Iwo Jima, Japan, at least in one very important respect.

One of those six men has been misidentified for decades.

"The U.S. Marine Corps has concluded that a previously unknown Marine is in the iconic flag raising image taken atop Mt. Suribachi during the battle of Iwo Jima in 1945," the Corps acknowledged in a statement Thursday.

It is not Navy Corpsman John Bradley in the photograph, as originally thought; rather, it was Pvt. 1st Class Harold Schultz, according to the Marines. The Corps says its history will be updated to reflect the new name but didn't provide further details. 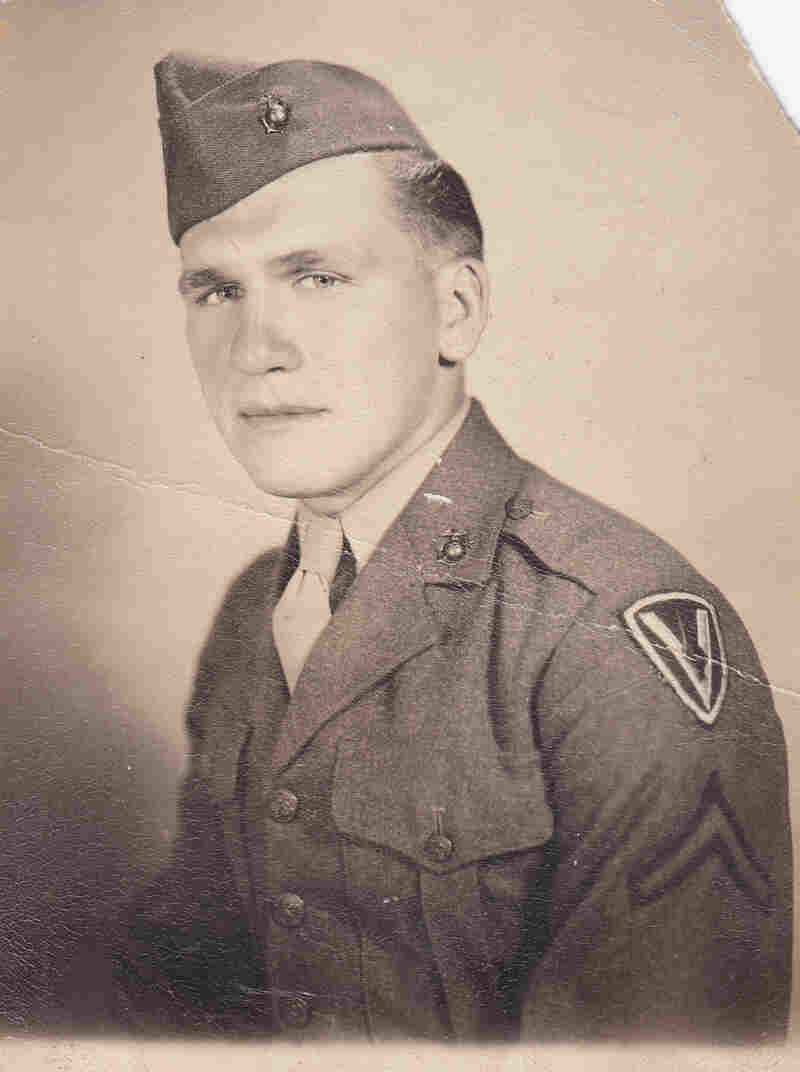 The photograph — which was taken on the morning of Feb. 23, 1945, and later inspired a federal monument — depicts a triumphant moment in an otherwise desperately bloody battle. An American patrol had wound its way up the peak of the small Pacific island, capping its trek by raising the U.S. flag — and then raising the flag again, after having taken down the first to replace it with a bigger one. It was this second flag-raising that Rosenthal captured on film.

And this, the Marine Corps believes, is at the heart of the confusion. In its statement, the Corps hypothesized that Bradley was involved in the first raising just "hours before the famous photo was taken," and for that reason never appeared in the photo.

As The Two-Way reported earlier, the Corps' internal inquiry follows a claim made by two amateur history buffs, Stephen Foley and Eric Krelle, who raised questions about the image. Independently, the Smithsonian Channel, which is producing a documentary about the photo, pursued its own line of research on the photo around the same time.

The documentary's production team eventually offered the fruits of its investigations to the Marine Corps, when it opened its own review in late April. The New York Times sums up the case laid before the Corps by the production team:

So, that helps explain why it was not Bradley, but if not him, who was this mystery figure?

That answer, according to The Washington Post, came to light when looking at the way Schultz carried his rifle. As the paper explains, other photos from the day show Schultz "holding his rifle with a sling that had been jury-rigged after one of the sling's mounts likely failed earlier in the battle" — a sling that helps explain why the rifle was sagging so low on his back in Rosenthal's photo.

That said, this does not diminish the role of the late Bradley, whose son James went on to write Flags of Our Fathers about the flag-raising. Rather, this swap is about details — important for those history books, but unlikely to change the photo's underlying message — according to Marine Corps Commandant Gen. Robert Neller.

"Although the Rosenthal image is iconic and significant, to Marines it's not about the individuals and never has been," Neller says. "Simply stated, our fighting spirit is captured in that frame, and it remains a symbol of the tremendous accomplishments of our Corps — what they did together and what they represent remains most important. That doesn't change."

And that message seems to have been one the late Schultz himself bore seriously. He never publicly spoke about his place in the photograph, and even when the topic arose once in family conversation, he was quick to dismiss it, The Times reports.

"My mom was distracted and not listening and Harold said, 'I was one of the flag raisers,' " his stepdaughter, Dezreen MacDowell, said in a telephone interview on Wednesday. "I said, 'My gosh, Harold, you're a hero.' He said, 'No, I was a Marine.' "

The Smithsonian Channel plans to broadcast its full findings in The Unknown Flag Raiser of Iwo Jima, set to air July 3.