Accessibility links
Shock, Rage And Gallows Humor: A Brexit Backlash On Social Media : The Two-Way Young voters had overwhelmingly voted to remain in the European Union. Now there's a flood of anger from those who accuse older generations of choosing a future they don't want. 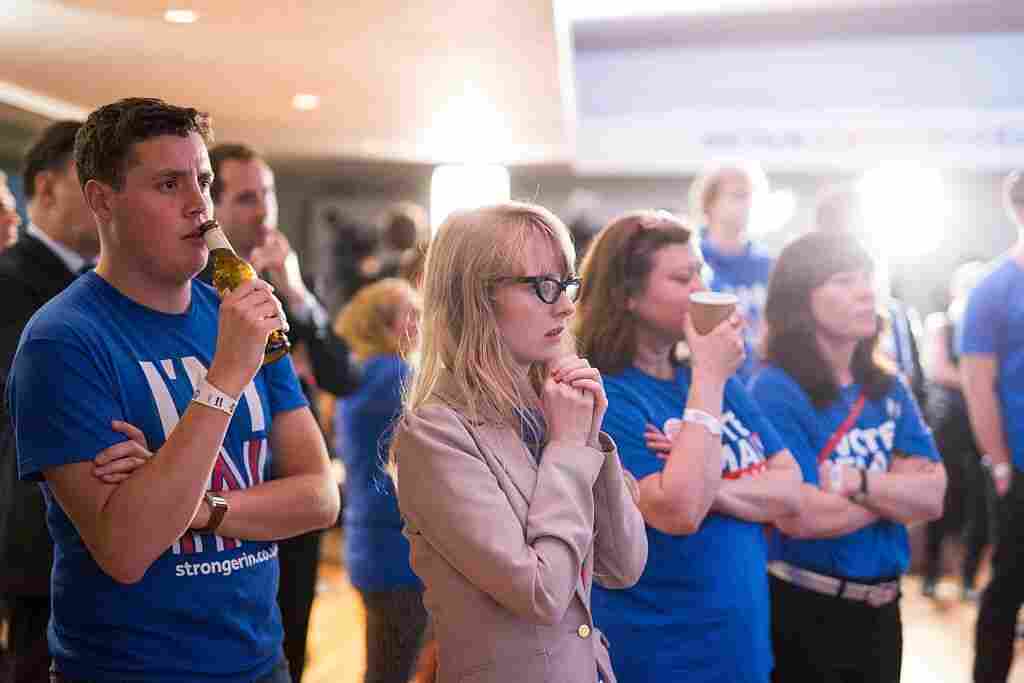 Supporters of the 'Stronger In' Campaign watch the results of the EU referendum being announced at a results party at the Royal Festival Hall in London on Friday. AFP/AFP/Getty Images hide caption 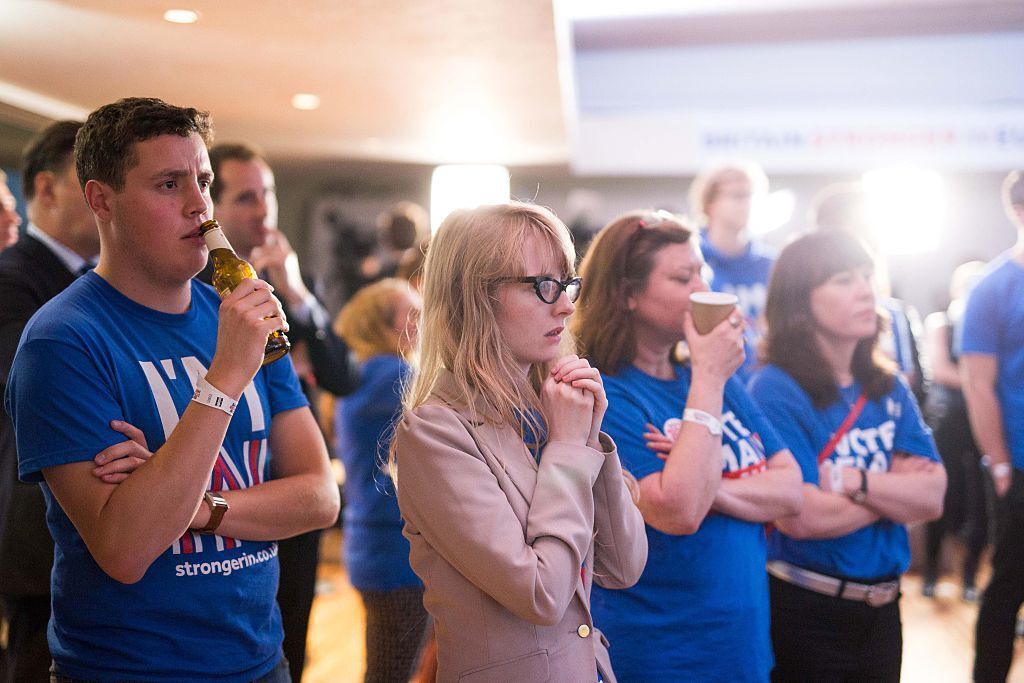 Supporters of the 'Stronger In' Campaign watch the results of the EU referendum being announced at a results party at the Royal Festival Hall in London on Friday.

Social media is flooded with expressions of shock and rage as the country begins to digest what the monumental decision will mean for its economy and its future.

From my 12,000-sample referendum day poll - how Britain voted: pic.twitter.com/IiDGCtB5Wi

It's that divide that has provoked this backlash from young people, who accuse older generations of choosing a future that they don't want. "Freedom of movement was taken away by our parents, uncles and grandparents in a parting blow to a generation that was already drowning in the debts of our predecessors," reads a comment on a Financial Times article that has been shared tens of thousands of times.

As the commenter writes, "The younger generation has lost the right to live and work in 27 other countries. We will never know the full extent of the lost opportunities, friendships, marriages and experience we will be denied."

This comment from a reader of the FT puts it better than I ever could. pic.twitter.com/fXupQYi24O

The hashtag #WhatHaveWeDone, which is trending in the U.K., provides a stark snapshot of the rage, disgust and sadness many young Brits feel about the result. Here's a selection of tweets:

Can hear a baby screaming blue murder next door. Can only imagine he has woken up to hear the news about his future. #WhatHaveWeDone #EUref

Turns out that pensioners hate "immigrants" more than they love their grandchildren. #WhatHaveWeDone #NotMyVote

I felt a star drop this morning. If I had my way, it would still be shining bright on the #EU flag. #WhatHaveWeDone pic.twitter.com/fwaHj6jpdk

We have opted for unemployment, no trade, low wages and a recession - but don't worry because we are 'free' #WhatHaveWeDone

Feeling sorry for college staff dealing with 16-17s who had no vote & feel they have been sold out by the older generation. #WhatHaveWeDone

Of course, a sizable number of young people supported the move and are celebrating:

What a day to be British 🙌🏻 #VoteLeave

The referendum result has also provoked some excellent gallows humor, poking fun at British food and at the immediate economic implications of leaving the EU.

Nipped to the shop for some breakfast. And so it begins. #EUrefResults pic.twitter.com/lLcdxCHj7p

Gorgeous view out across the Irish Sea from Dublin this morning. pic.twitter.com/lRpZ3IkR3F

In light of Brexit...the new £20 note has just been revealed. pic.twitter.com/74HuDnzPqj

How do I tell them?? #Brexit pic.twitter.com/6Y7hRIKINi

It's also prompted the classic "moving to Canada" reaction, with some social media users posting that they are researching other places to live. According to Google Trends, they have plenty of company.

+100% spike in UK searches for "getting an Irish passport" after #Brexit votehttps://t.co/qyssi0v91x pic.twitter.com/aUdHplLMaS

In a Guardian opinion piece, writer Rhiannon Lucy Cosslett argues that young people are right to be angry, especially the "16-year-olds who were denied the right to participate in this referendum." Here's more from Cosslett:

"...[I]f you are young and you are experiencing feelings of fury and heartbreak about the result, you are justified in doing so. The political is personal; the way that the future weeks, months and years play out will have powerful, definable consequences on the way you live. This is one of those momentous turning points in our personal timelines; if you're pissed off, you are right to be."

You can find our coverage of the vote result here.