Accessibility links
Pope Francis Urges World To Never Forget Armenian Genocide : The Two-Way His characterization of the slaughter of 1.5 million Armenians is likely to cause tensions with Turkey. He was not expected to use the term but then ad-libbed it into his prepared remarks. 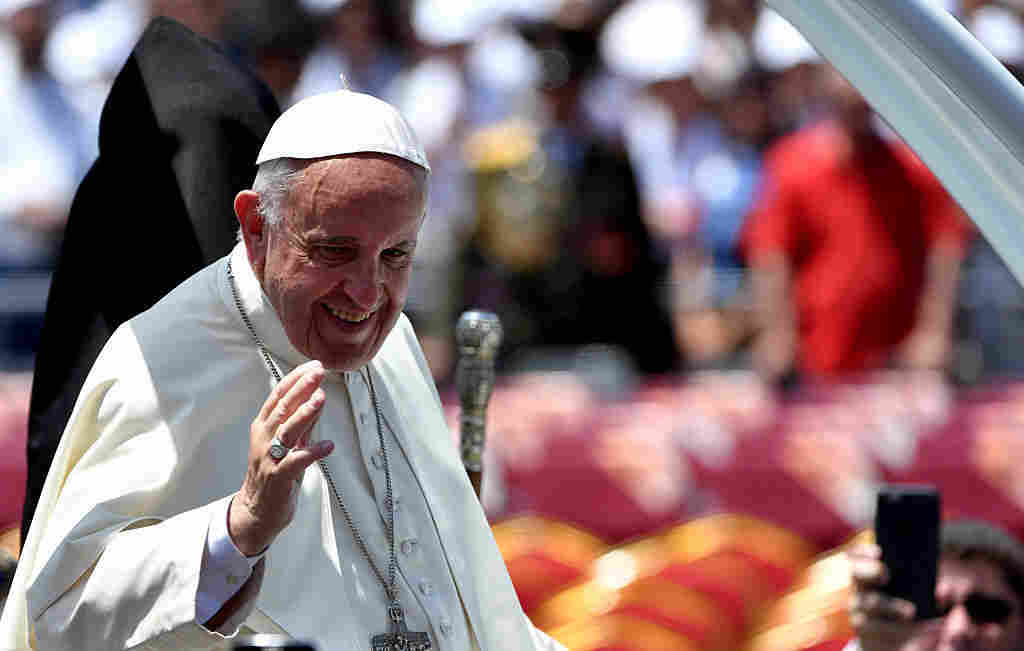 Pope Francis waves to the crowd from the popemobile after an open-air mass in Armenia's second-largest city of Gyumri on Saturday. Tiziana Fabi /AFP/Getty Images hide caption 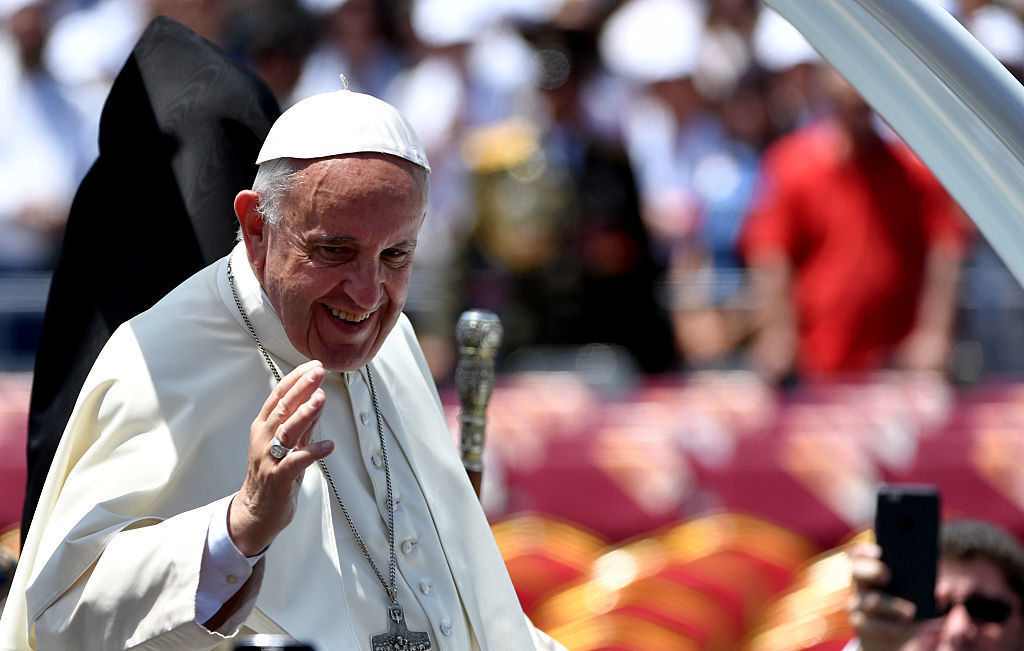 Pope Francis waves to the crowd from the popemobile after an open-air mass in Armenia's second-largest city of Gyumri on Saturday.

In a visit to Armenia, Pope Francis has urged the world to never forget the Ottoman-era slaughter of some 1.5 million Armenians which he termed a genocide – a characterization likely to cause tensions with Turkey.

The Pope called it "genocide" publicly for the first time last year – which sparked a furious reaction from Turkey. As Weekend Edition Saturday reported, Turkey's president Recep Tayyip Erdogan told him not to do it again and recalled its ambassador from the Vatican for 10 months.

NPR's Sylvia Poggioli, reporting from Armenia, explained that the Pope ad-libbed the politically-charged term into prepared remarks at the presidential palace Friday evening:

"At a Vatican briefing, the spokesman – Father Federico Lombardi – used the Armenian term ... which means 'the great evil.' And he bristled when asked why he didn't say genocide. So when the prepared text of the pope's speech last night used only the Armenian term, most of us thought that was a possible diplomatic overture towards Turkey.

"But in his actual delivery, the pope added the word genocide. He said: That genocide, made possible by the twisted racial, ideological, or religious aims that darken the minds of the tormentors, even to the point of planning the annihilation of entire peoples."

The pope's comments drew a standing ovation from Armenia's president, she added. Francis has long been a vocal supporter of the Armenian cause, which dates back to his close relationship with the Armenian diaspora community in his native Argentina, as Sylvia has reported.

Lombardi said the Vatican "wasn't aiming to renew conflict with Turkey by repeating the term, stressing that the pope has always called for reconciliation," according to The Associated Press.

Turkey did not immediately respond to the characterization. Even though "historians widely agree that 1.5 million Armenians were killed," Sylvia explained, the country "vehemently rejects the accusation of genocide, claiming the number of dead was smaller and that they were victims of civil strife." 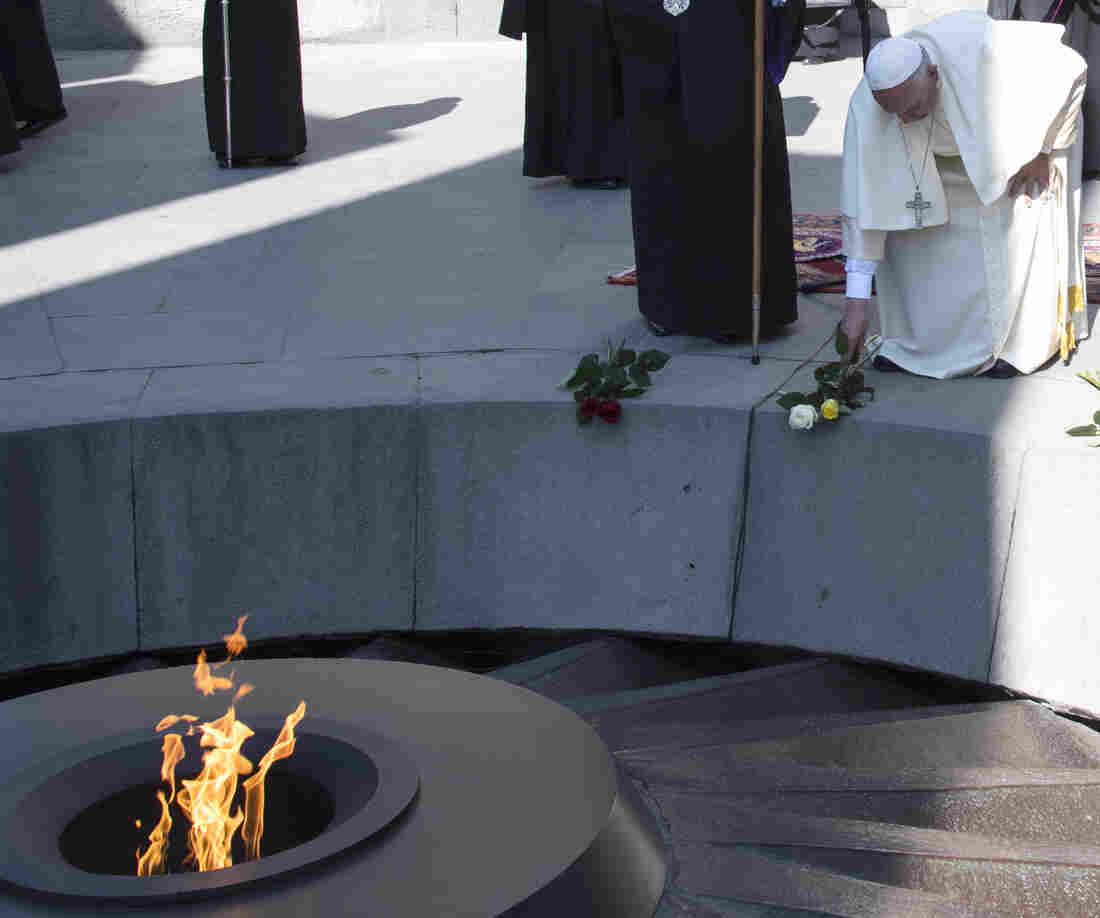 On Saturday, Francis visited the Armenian genocide memorial in Yerevan. Sylvia said Francis prayed and then wrote this in the memorial guest book:

"Here I pray with pain in my heart, so that never again will there be tragedies like this. ...May God protect the memory of the Armenian people. Memory should never be watered down or forgotten. Memory is the source of peace and the future."

Armenians, who are primarily Orthodox with a Catholic minority, responded positively to the pope's visit. They seemed "genuinely honored to welcome the pope," as the AP reported.

"We have the memory of the genocide in our genes," 45-year-old Alexander Rubenyan told the wire service. "It used to be a gene of sadness, but with every visit of people like the pope the Armenian gene is becoming more alive and full of optimism."