Accessibility links
An Avian Mystery: Rare Parrot Spotted In Wild For First Time In 15 Years : The Two-Way A solitary Spix's Macaw was spotted and caught on video flying over Bahia, Brazil. The origins of the bird are unknown, but conservators say its appearance represents "a new hope" for the area.

An Avian Mystery: Rare Parrot Spotted In Wild For First Time In 15 Years

An Avian Mystery: Rare Parrot Spotted In Wild For First Time In 15 Years 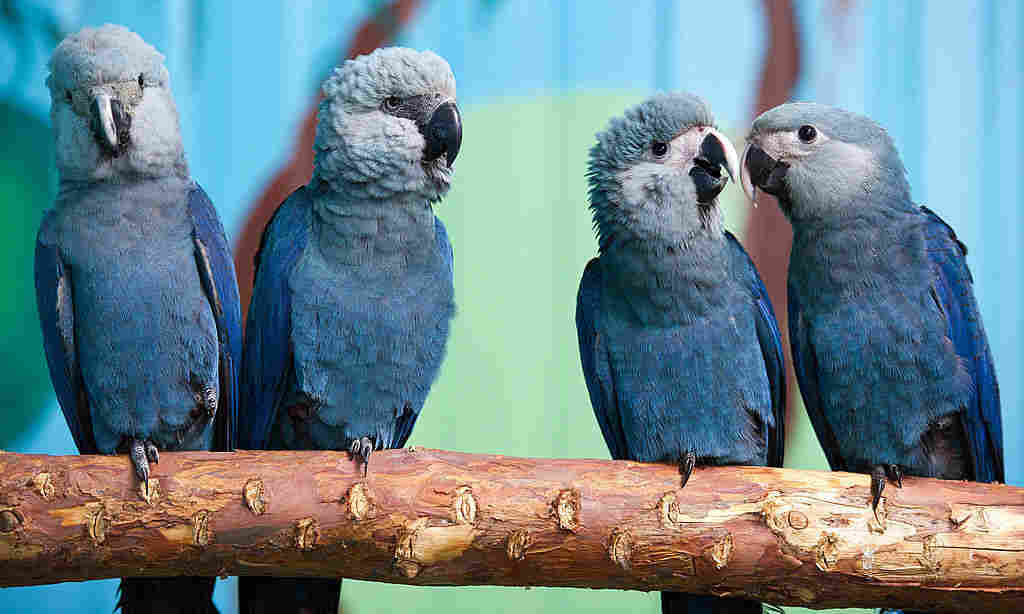 Spix's macaws (L-R) Felicitas, Frieda, Paula and Paul sit on a branch in their aviary in Germany. The species has not been seen in the wild for 15 years until the recent sighting in Brazil. DPA/AFP/Getty Images hide caption 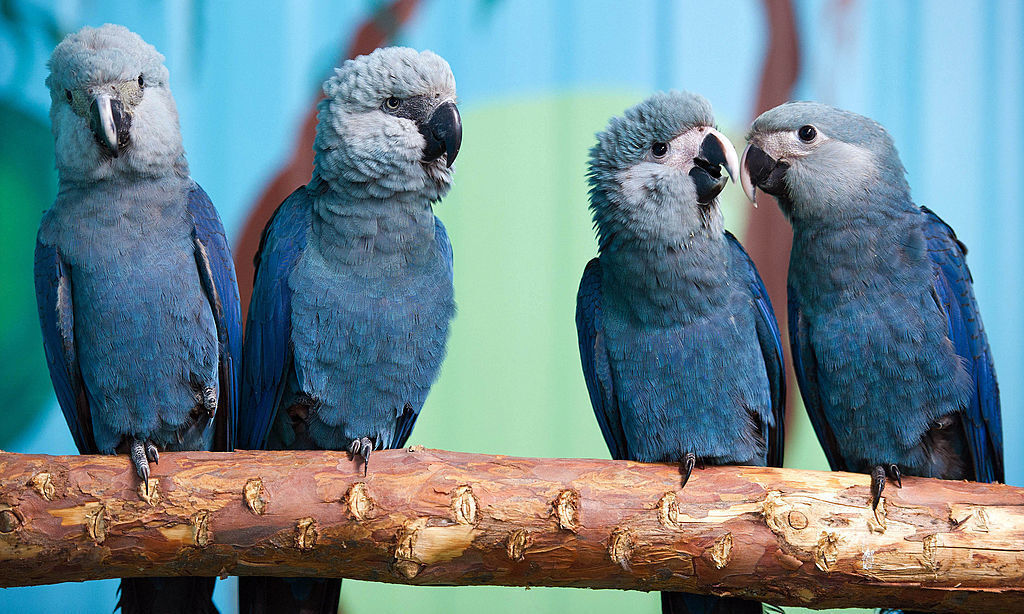 Spix's macaws (L-R) Felicitas, Frieda, Paula and Paul sit on a branch in their aviary in Germany. The species has not been seen in the wild for 15 years until the recent sighting in Brazil.

For the last 15 years, Spix's Macaw has been presumed extinct in the wild. That's until one of the blue-feathered parrots was spotted and caught on video flying near the town of Curaca, Brazil.

Conservators say the appearance of the mysterious rare bird represents "a new hope" for the area.

The bird was first spotted by a local farmer named Nauto Sergio Oliveira, a government conservation institute said in a statement. Oliviera told his neighbors, and the next day his wife Lourdes Oliveira and daughter Damilys trekked out at dawn in search for the bird.

The rare parrot appeared in a nearby riparian forest and Damilys managed to catch it on video:

The footage isn't high quality, but the bird's appearance and sound are enough to convince ICMBio, the government environmental agency charged with biodiversity conservation, and BirdLife International, an international conservation group responsible for with assessing the status of the bird.

"It's clear, it's a Spix's Macaw," Pedro Develey, CEO of the conservation group SAVE Brasil, tells The Two-Way. He immediately traveled to interview local residents who had seen the animal.

The bird's existence presents a mystery, he says – "Is it a wild bird, or a captive bird that was released or escaped?" He adds that it was probably a captive bird because conservators have had extensive presence in the area where they would have likely seen it previously.

The blue-feathered bird might look familiar — Spix's Macaws were the subject of the 2011 animated film Rio.

A Spix's Macaw was last seen in the wild in 2000, Develey explains, raising questions about whether this could be a sighting of that long-lost animal. "We don't know – and that makes it even more interesting."

A network of local people are searching for the bird, and an official expedition supported by the government is also going to be looking for it.

Spix's Macaw had been a source of pride to residents of the Curaca region, Develey explains. Here's more:

Now, the appearance of this bird represents "a new hope for everyone," he says. "The community is euphoric about it."

Spix's Macaw became critically endangered due to loss of habitat and large-scale trapping for the live bird trade, BirdLife explains. There are currently about 130 of these birds in captivity. Since 2000, the focus has been to breed Spix's Macaws in captivity with the hope of releasing some into the wild in the future.

This mysterious bird could help with that effort. "The real value of this bird is that it's in the wild," Develey explains. "What we need now is a wild bird... to start to understand what to do when we release the new birds. Now we have a model to understand the bird's behavior."