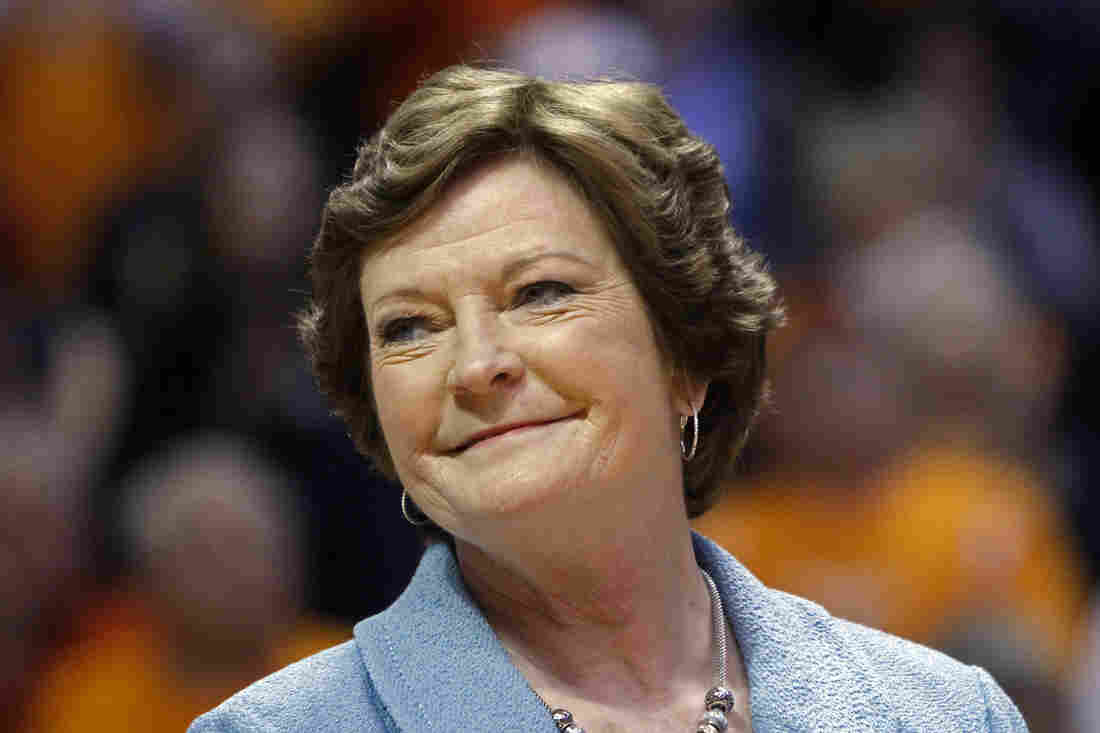 Former Tennessee women's basketball coach Pat Summitt smiles as a banner is raised in her honor before the team's game against Notre Dame in Knoxville in January 2013. Wade Payne/AP hide caption 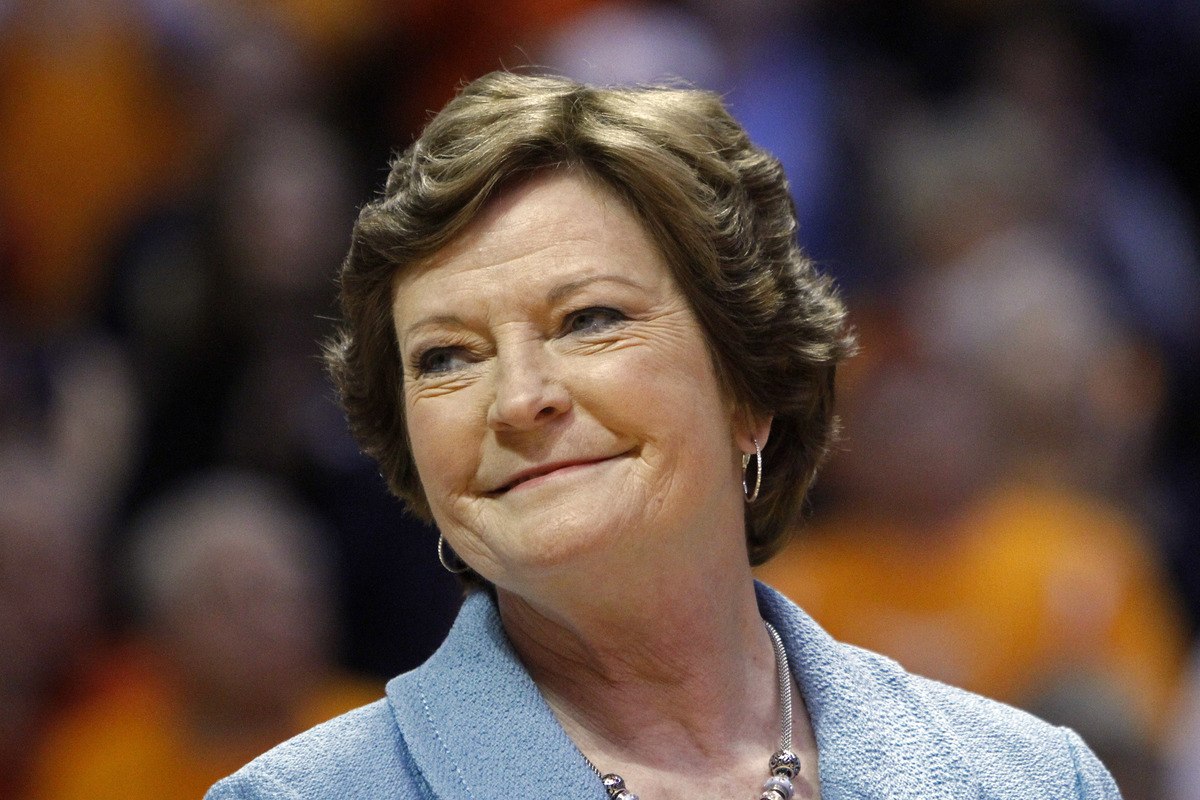 Former Tennessee women's basketball coach Pat Summitt smiles as a banner is raised in her honor before the team's game against Notre Dame in Knoxville in January 2013.

Former University of Tennessee college basketball coach Pat Summitt has died, according to a statement from the Pat Summitt Foundation. She was 64.

Summitt died peacefully, surrounded by loved ones at a senior living facility in Knoxville, Tenn., her son, Tyler Summitt, said.

"She was more than a coach to so many — she was a hero and a mentor," her son said.

Summitt, who coached the Lady Volunteers for 38 years, won 1,098 games and is the leader in all-time wins by a Division I college basketball coach — men's or women's. She led the school to eight national championships, and is a member of the Basketball Hall of Fame. 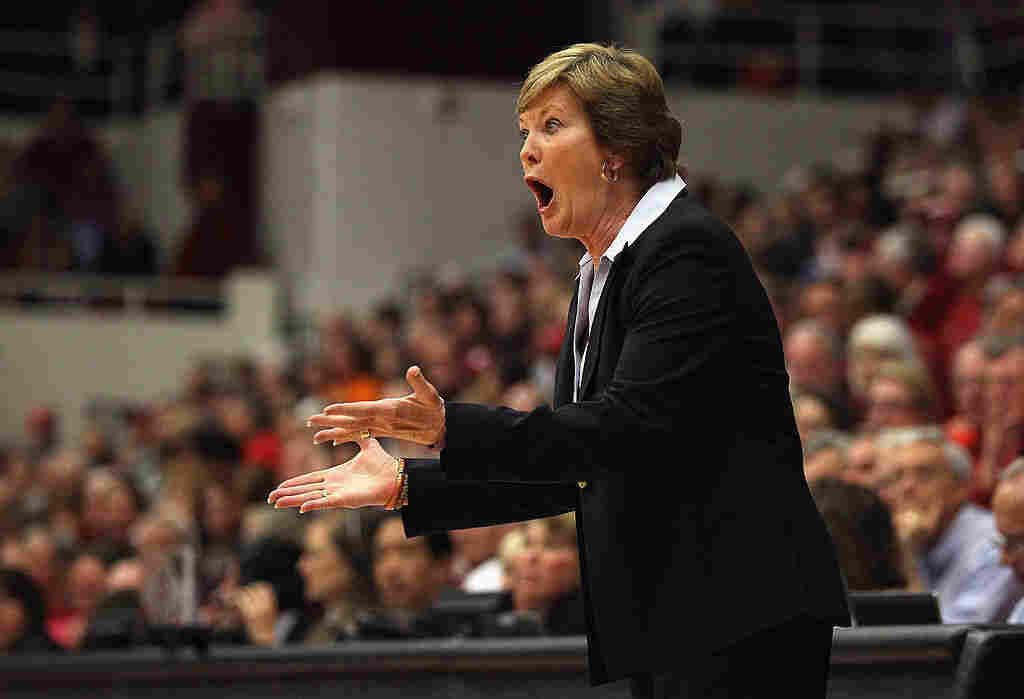 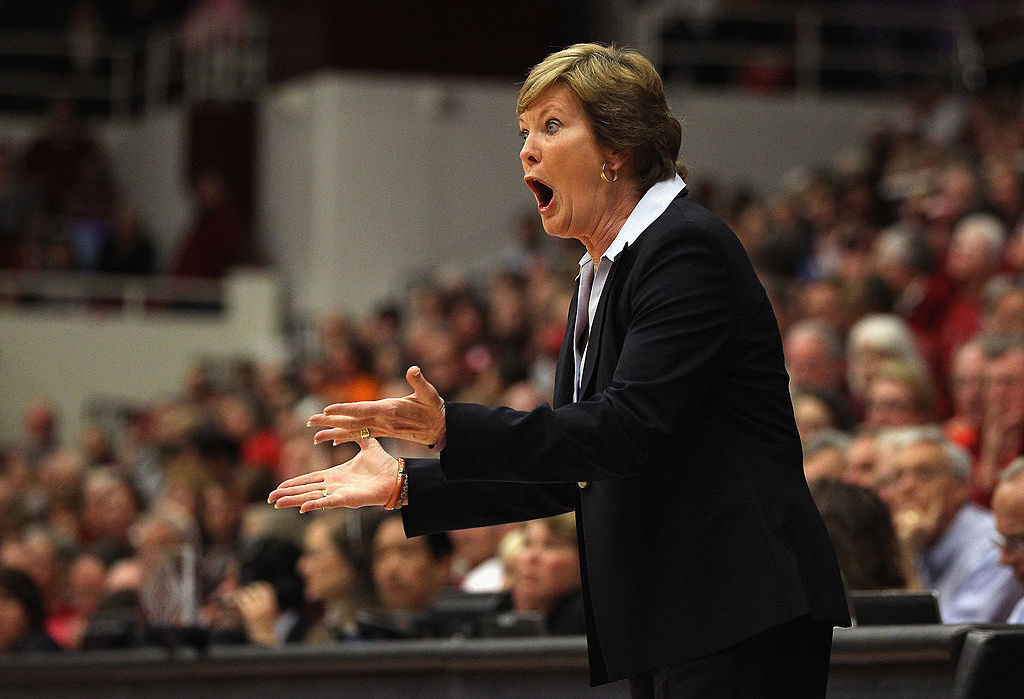 Tennessee Lady Volunteers head coach Pat Summitt argues with the referee during their game against the Stanford Cardinal on Dec. 20, 2011, at Maples Pavilion in Palo Alto, Calif.

She was diagnosed with early onset dementia in 2011 at the age of 59. Summit decided to retire in 2012, taking the role of "head coach emeritus." As she said at the time:

"If anyone asks, you can find me observing practice or in my office. Coaching is the great passion of my life, and the job to me has always been an opportunity to work with our student-athletes and help them discover what they want. I will continue to make them my passion. I love our players and my fellow coaches, and that's not going to change." 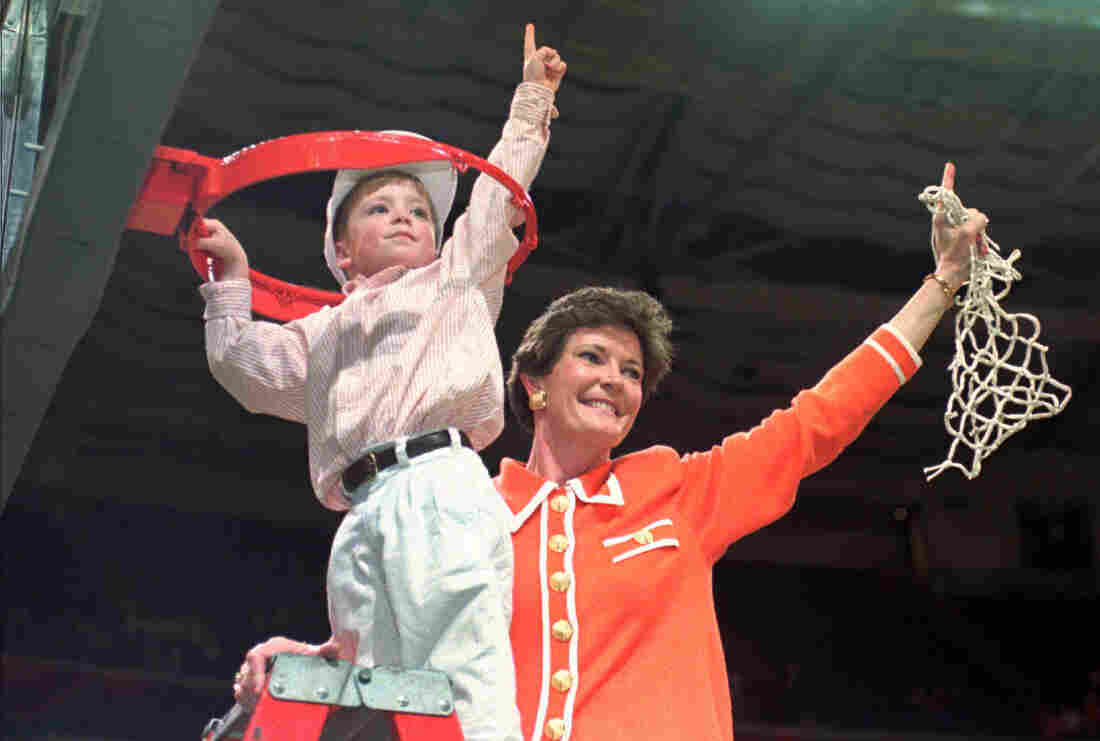 Summitt became the head coach of the Lady Vols in 1974 at the age of 22, and represented the United States as a player in the 1976 Olympics, the first that recognized women's basketball. Summitt was head coach of the U.S. Women's National Team when it won Olympic gold in 1984.

Patricia Sue Head was born on June 14, 1952, in Clarksville, Tenn. The fourth of five children, she grew up and worked on her family's farm throughout the day. In 2009, she told NPR's Michel Martin about how her father's no-nonsense attitude molded her, and eventually led to her style of coaching, including her self-described intensity and an icy-cold stare that could freeze a player in her tracks.

"I guess I got that from my father," she said. "He — my late father was — he was a man that was very focused and driven. And I grew up on a dairy farm. So, you know, cows never — they don't take a day off on the dairy farm. So we milked at 5 a.m. and 5 p.m., and he just really — he demanded a lot from the five children, but in a good way. I don't think I would have this work ethic or this drive, or probably the stare. But with that, I think that just represents my focus and my intensity."

During Summitt's first season as head coach, the Lady Vols finished with a winning record, all while she continued her master's degree studies.

Summitt, well-known both for her love of basketball and her love of Tennessee, displayed that tenacity in a story billed by some as legendary. In 1990, Summitt was on a recruiting trip to Pennsylvania when her water broke. She completed the recruiting visit, then flew home to Knoxville, Tenn., asking the pilots not to stop so that her son, Ross (known to many by Tyler), would be born in the Volunteer State.

At the beginning of her coaching career, Summitt's teams had no money for uniforms, little attention from fans, and no dressing room to call their own. In a 2009 interview with Time, Summitt said her teams didn't give that much thought.

"I had to drive the van when I first started coaching. One time, for a road game, we actually slept in the other team's gym the night before. We had mats, we had our little sleeping bags. When I was a player at the University of Tennessee-Martin, we played at Tennessee Tech for three straight games, and we didn't wash our uniforms. We only had one set. We played because we loved the game. We didn't think anything about it."

Summitt's success with the Lady Vols helped bring women's basketball to the masses. Her success, along with other programs, led to more women's college basketball games being broadcast on national television, and the game's growing popularity no doubt helped to create the Women's National Basketball Association. 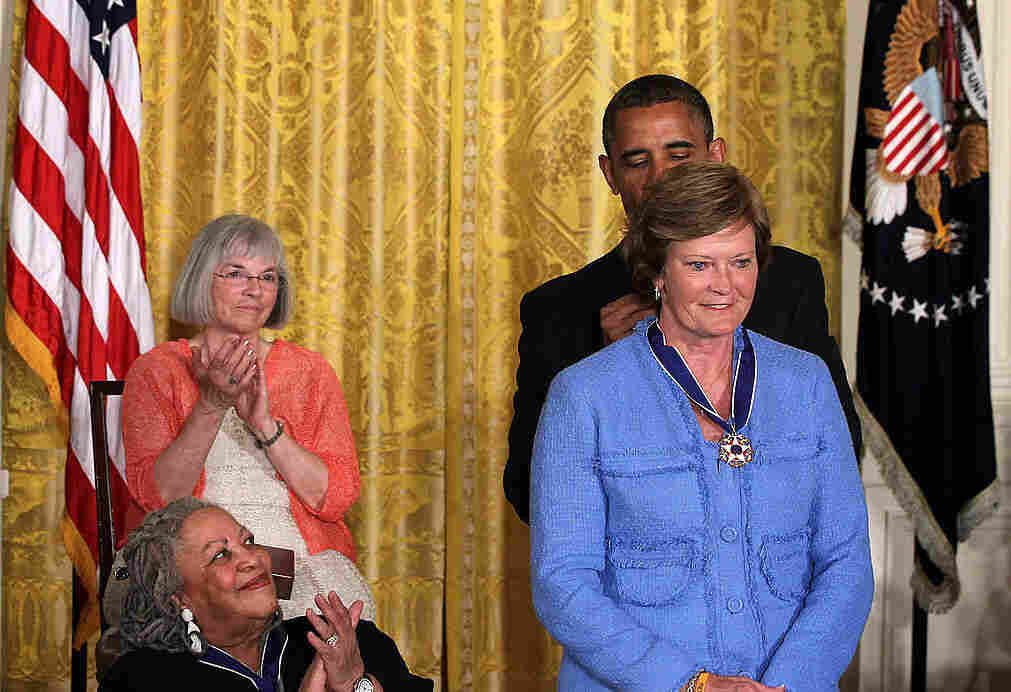 President Obama presents Pat Summitt with the Presidential Medal of Freedom in May 2012 during an event in the East Room of the White House in Washington, D.C. Alex Wong/Getty Images hide caption 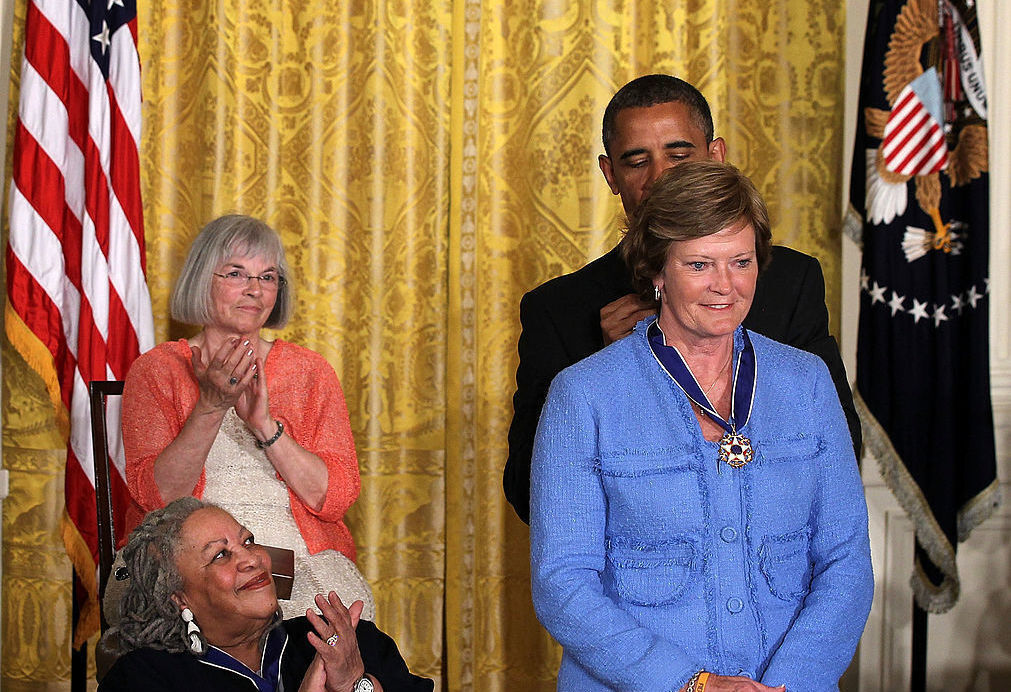 President Obama presents Pat Summitt with the Presidential Medal of Freedom in May 2012 during an event in the East Room of the White House in Washington, D.C.

Despite her courtside intensity, Summitt could be known to have fun. Following a game in 2007 in which Tennessee's then-men's basketball coach, Bruce Pearl, donned Tennessee Orange body paint and cheered on the Lady Vols, Summitt returned the favor by showing up to a men's basketball game dressed as a cheerleader and leading the fans in a rendition of "Rocky Top," the school's unofficial fight song.

In 2013, Summitt spoke with NPR's Linda Wertheimer about the introduction of Title IX as part of the Equal Opportunity in Education Act, which expanded college sports programs for women.

"It just opened the doors for a lot of players that wanted to play basketball," Summitt said. "We didn't have to go play with the guys. We just did what we wanted to do. ... I thought it was important. That was the best time of my life as far as coaching."

Summitt's interview in 2013 was, in part, to talk about her memoir, Sum It Up. At the time, Summitt was two years into her diagnosis of early onset Alzheimer's-type dementia.

Summitt's last season as head coach, after her diagnosis, finished much as many seasons before had: with the Lady Vols deep into the NCAA tournament and conference tournament champions. Following her resignation, she was named women's basketball head coach emeritus of the University of Tennessee.

Summitt continued to focus the attention on her players, deflecting away from herself, much as she did throughout her career. She told The Washington Post shortly after her resignation:

"The thing is: I have to keep living and doing what I want to do, and those players mean the world to me. With us having five seniors leaving, I feel obligated in a positive way to be there for the team."