Accessibility links
Researchers Uncover Long-Lost Tunnel Used By Jews To Escape Extermination Pits : The Two-Way They have provided physical evidence to a famous story of heroism during the Holocaust — known before only through the testimony of the 11 Jews who escaped a Lithuanian massacre site. 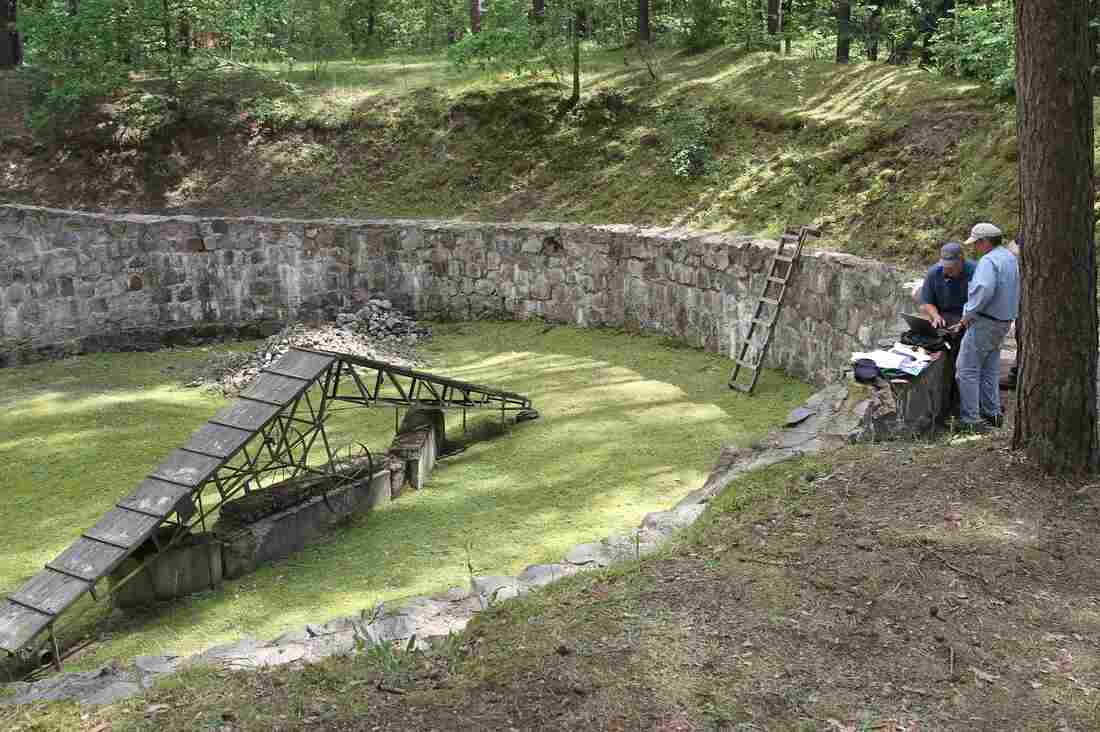 This is where the Burning Brigade was housed. The apparatus in the middle is not the original, but ones like it were used as ramps so that the bodies could be stacked high and set alight. All the pits at Ponar were originally dug by the Russians to store fuel. Ezra Wolfinger for Nova hide caption 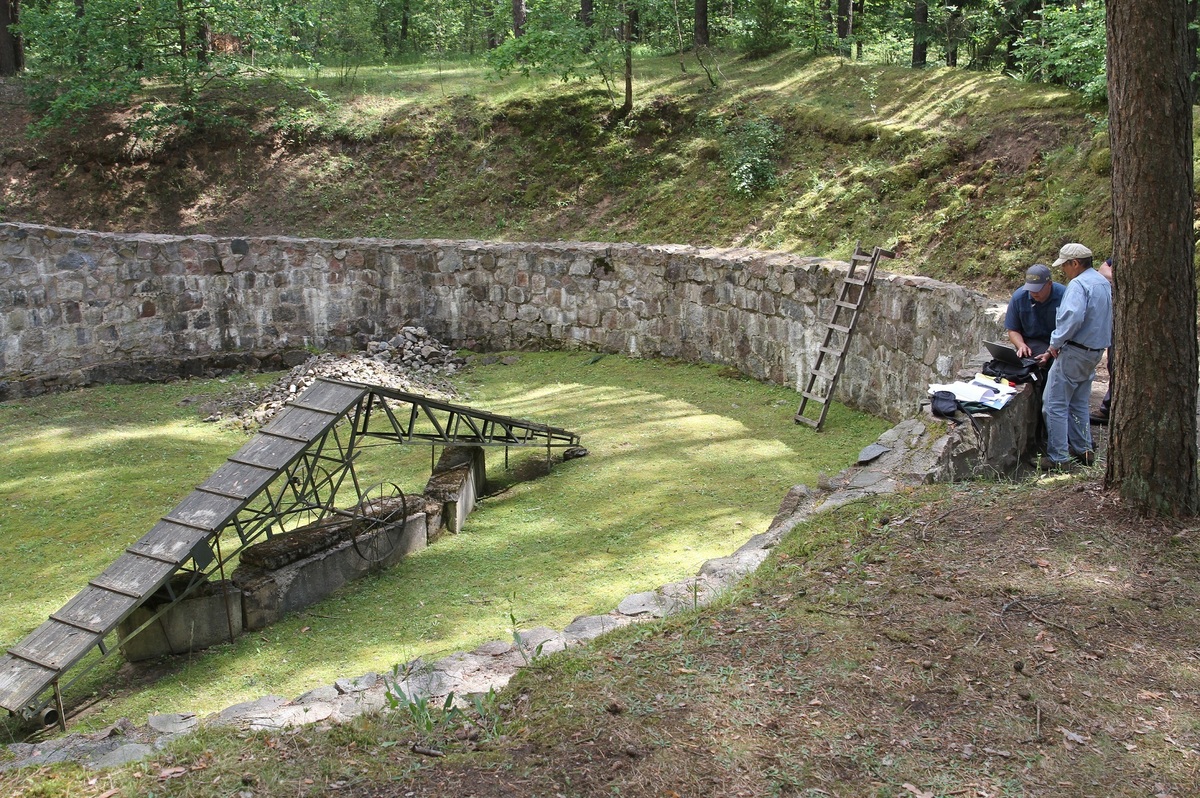 This is where the Burning Brigade was housed. The apparatus in the middle is not the original, but ones like it were used as ramps so that the bodies could be stacked high and set alight. All the pits at Ponar were originally dug by the Russians to store fuel.

By doing so, they have provided physical evidence of a well-known tale of heroism during the Holocaust — known before only through the testimony of 11 Jews who escaped.

For the past 72 years, teams have been searching for the tunnel at the Ponar massacre site, located in a forest about 6 miles from Vilnius.

"They've used every single normal form of exploration but the use of this noninvasive technology allowed us to go into burial pits — the areas are filled with graves — and not desecrate the gravesites," Richard Freund, a University of Hartford professor of Jewish history and a leader of the expedition team, tells The Two-Way.

"This is one of the great stories of courage during the Holocaust that would not ever have been able to have been tracked but for the use of this geoscience," he adds. 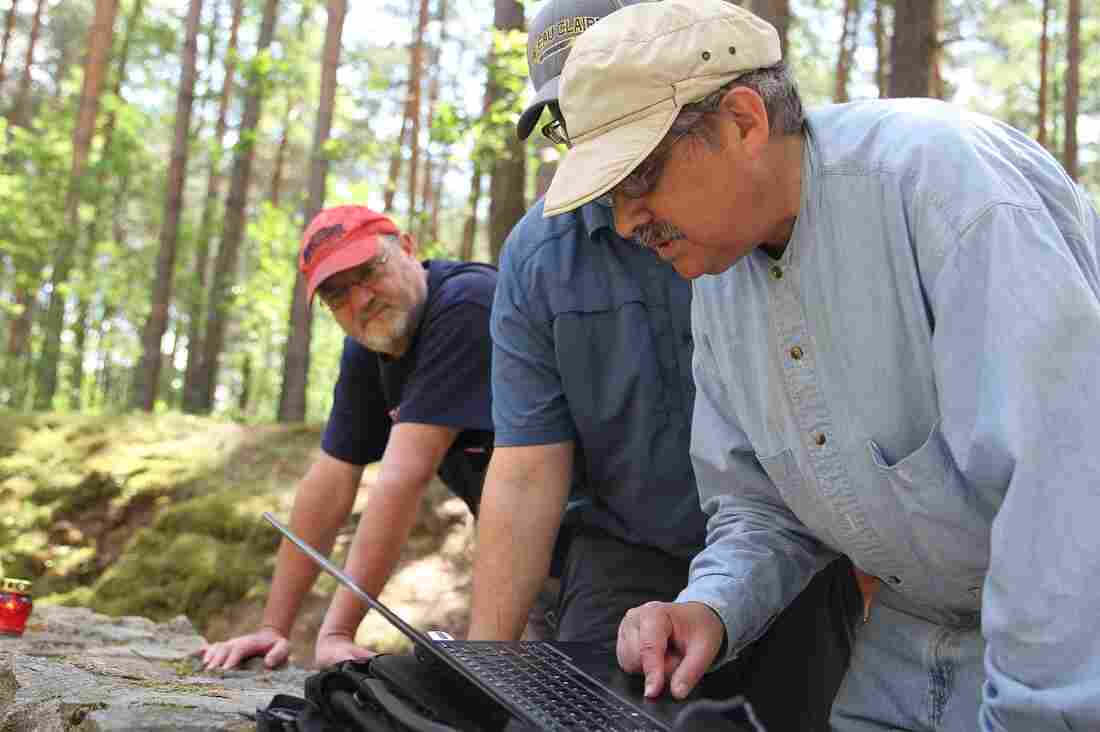 Richard Freund, University of Hartford (front); Harry Jol, University of Wisconsin, Eau Claire (middle); and Philip Reeder, Duquesne University (back), discuss where the next round of work will be conducted. Ezra Wolfinger for Nova hide caption

The extermination pits at the site hold the "remains of 100,000 people who were executed there by the Nazis, including 70,000 Jews shot and buried there from July 1941 through July 1944," as the PBS series Nova reports in a statement.

The group of 80 prisoners who attempted to escape through the tunnel was known as the Burning Brigade. Freund explains, "They were from the local area and brought there for the most gruesome task of the entire Holocaust: These people were brought there, 80 Jews, to burn all the bodies that were there." Russian troops were nearing the area in April 1944, he adds, and this was an attempt to destroy the evidence of Nazi crimes.

Freund says the Burning Brigade knew "in their heart of hearts that they were going to be the last victims — unless they got out."

A civil engineer in the group came up with the daring plan to dig a tunnel out of their barracks, which was in a pit. "For 76 days, they used spoons, they used their hands, and they burned [bodies] all day and dug all night," Freund says.

And on the last night of Passover, on one of the darkest nights of the month, they made their move. Only 11 made it out of the tunnel and through the forest to safety. They testified a year later at a crimes commission in the Soviet Union. "These people's testimonies really are a document that now, with the physical evidence, is like solving a cold case after 72 years," Freund adds. 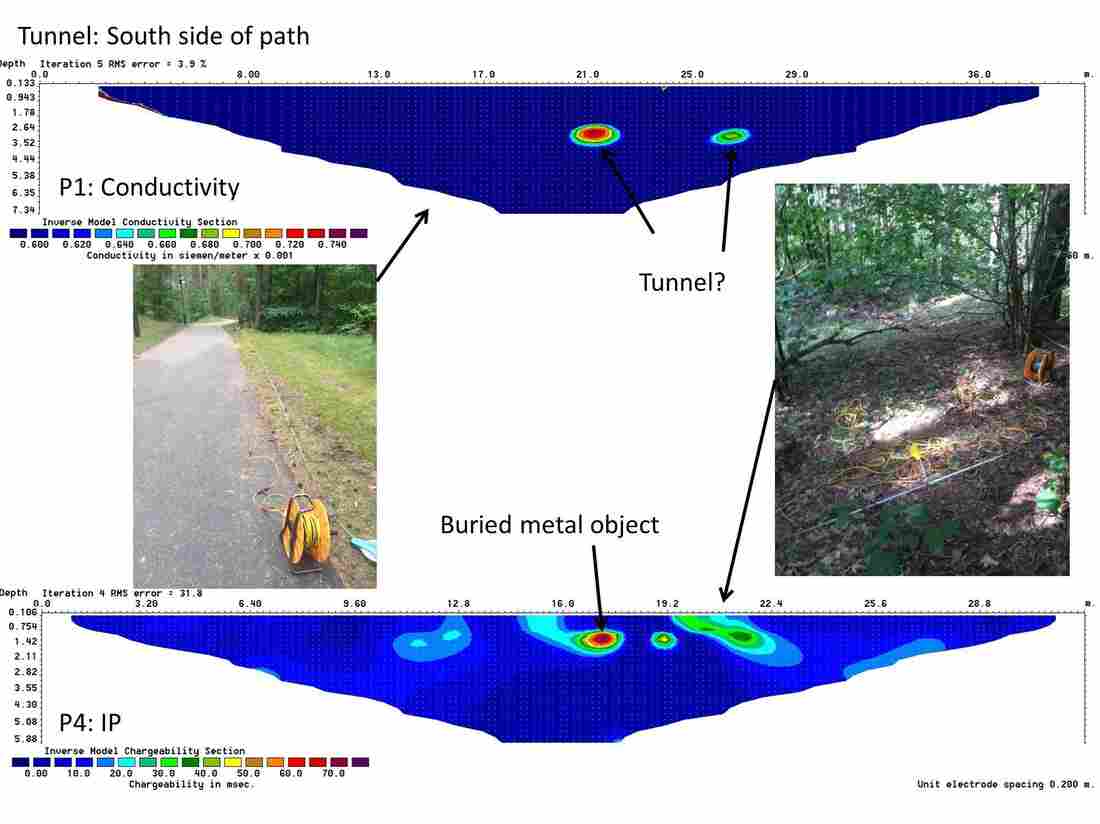 The researchers used electrical resistivity tomography, which is also used in oil and gas exploration, Freund says. He describes the moment that they found the tunnel:

"It's great working with geophysicists, because the geophysicists are very dispassionate usually. They're sitting in the field, and these guys are generally looking for gas and oil. ... They ran this section over where we suspected the tunnel might be, and they [reviewed] the results [the computer had analyzed]. And it's there. On June 8, we're looking at the first image of this tunnel that had been missing since the people left on April 15, 1944. And I think that everybody got a big chill."

The tunnel, which has collapsed, was about 100 feet long and measured 27 inches by 25 inches. As Freund puts it, that's "just about the size for an emaciated human being to slide through."

In 1979, two Ponar survivors, Motke Zaidel and Itzak Dugin, described the painstaking, dangerous work that culminated in their miraculous escape in an interview for the film Shoah. Zaidel describes the moment he finished digging the last few inches of the tunnel:

"I started to work and I still hadn't quite finished when there were already twenty people in the tunnel and I felt that I really could no longer, I didn't have any more air to breathe. I had a bar of iron in my hand and I tried, I attempted to make holes in the surface of the soil and suddenly I made a hole, two holes, and finally I had air. It was then that we cut the electricity, there was electricity inside the tunnel, and when we took off ... when we removed the chains and I opened the hole, I widened it and I had open air. When I stuck my head out, I already saw the sky, the stars, but I also saw a group of German soldiers who looked precisely in the direction of our tunnel."

The Germans started firing at the Jews. Other escapees were killed by mines. You can read the full transcript of the interview here.

None of the survivors who escaped from Ponar are still alive, Freund says. He adds that it's techniques like the ones used to find the tunnel that will most likely dominate future research on the Holocaust, after the last survivors have died.

"Science is the new frontier for studying the Holocaust," he says. "In 20 years we won't have survivors to ask, but we'll have another generation of people doing serious research on the Holocaust."

Nova was part of the excavation and will release a full-length documentary on the findings next year.