Accessibility links
Alvin Toffler, 'Future Shock' Author, Dies at 87 : The Two-Way Toffler's warnings about 'information overload' and the accelerating pace of change in modern society made his seminal 1970 book a best-seller in the U.S. and around the world. 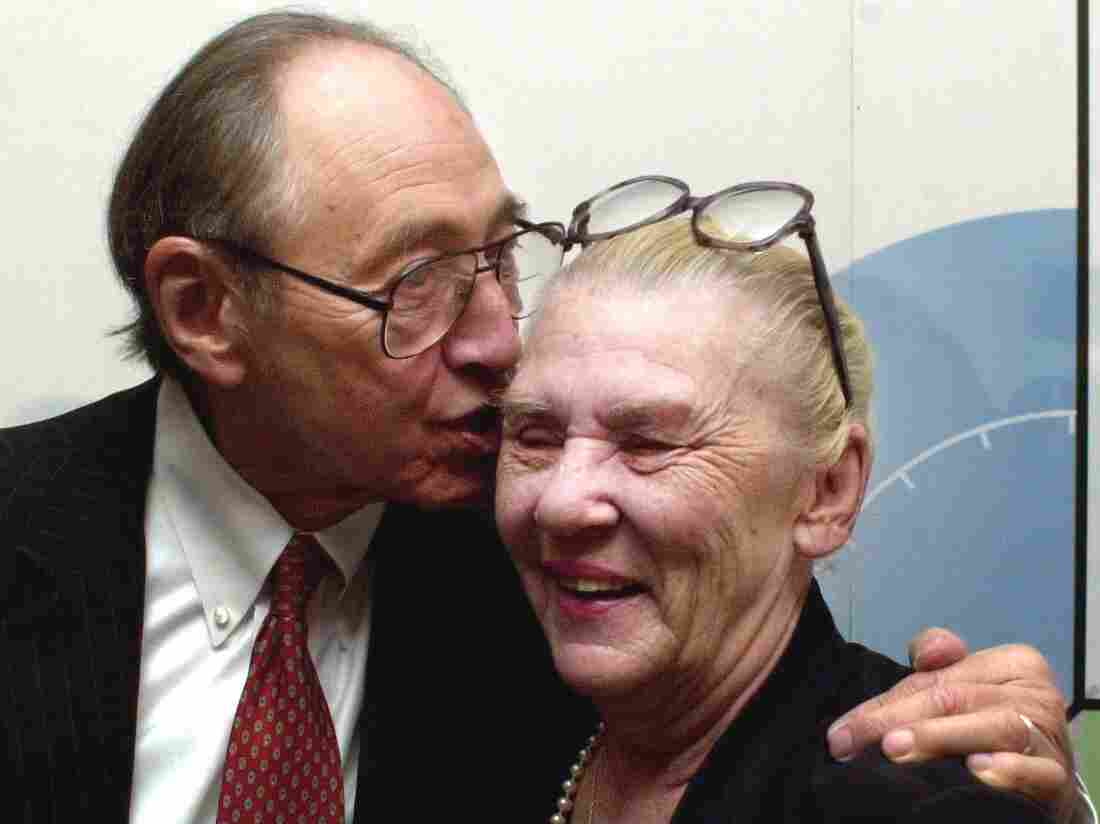 Futurist and writer Alvin Toffler is seen with his wife and longtime writing and research partner, Heidi Toffler, in 2002. AP hide caption 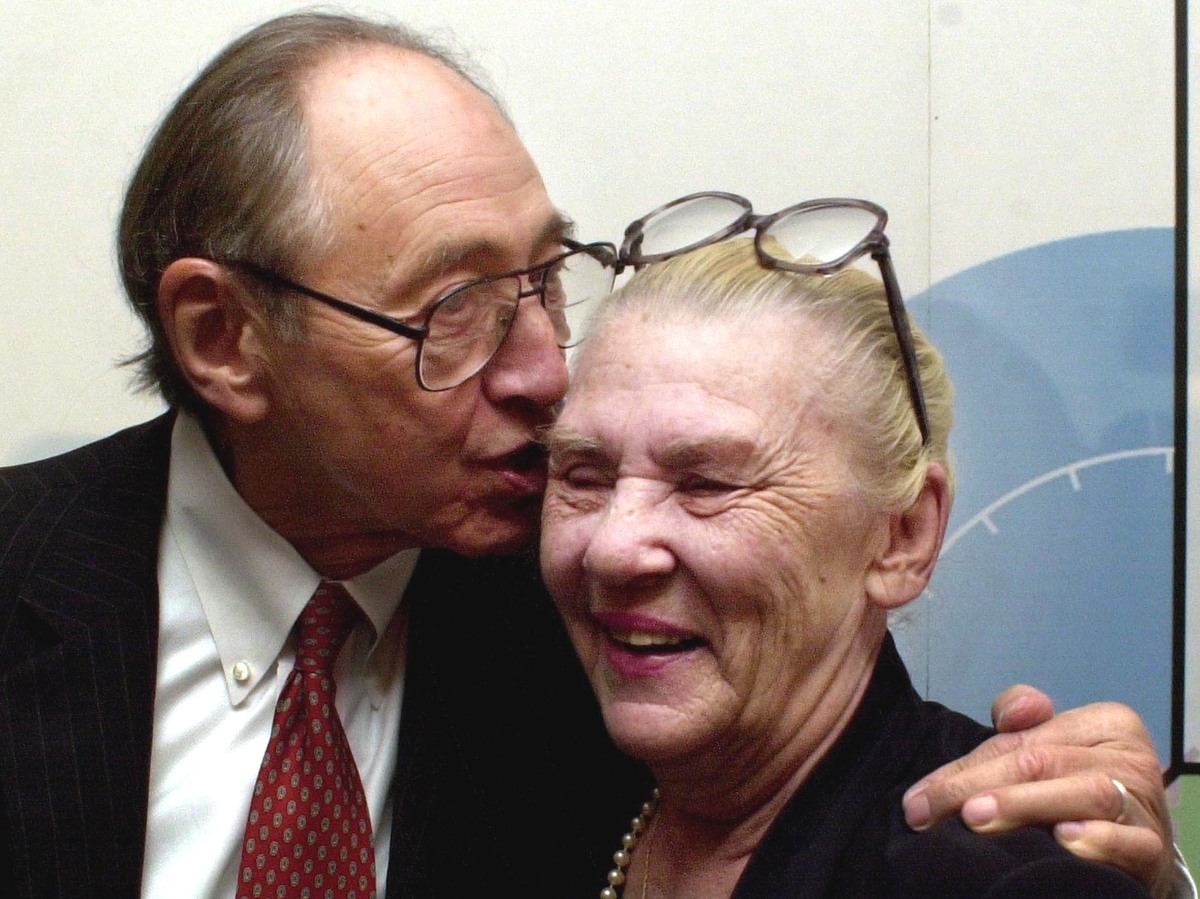 Futurist and writer Alvin Toffler is seen with his wife and longtime writing and research partner, Heidi Toffler, in 2002.

Alvin Toffler, the author whose celebrated 1970 book Future Shock examined the danger and promise of the accelerating pace of change in society, died in his sleep Monday in Los Angeles. He was 87. 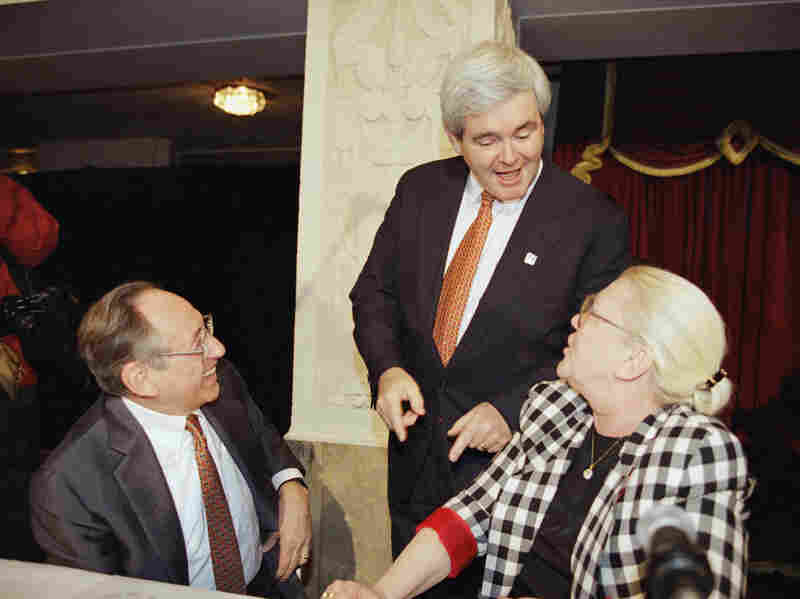 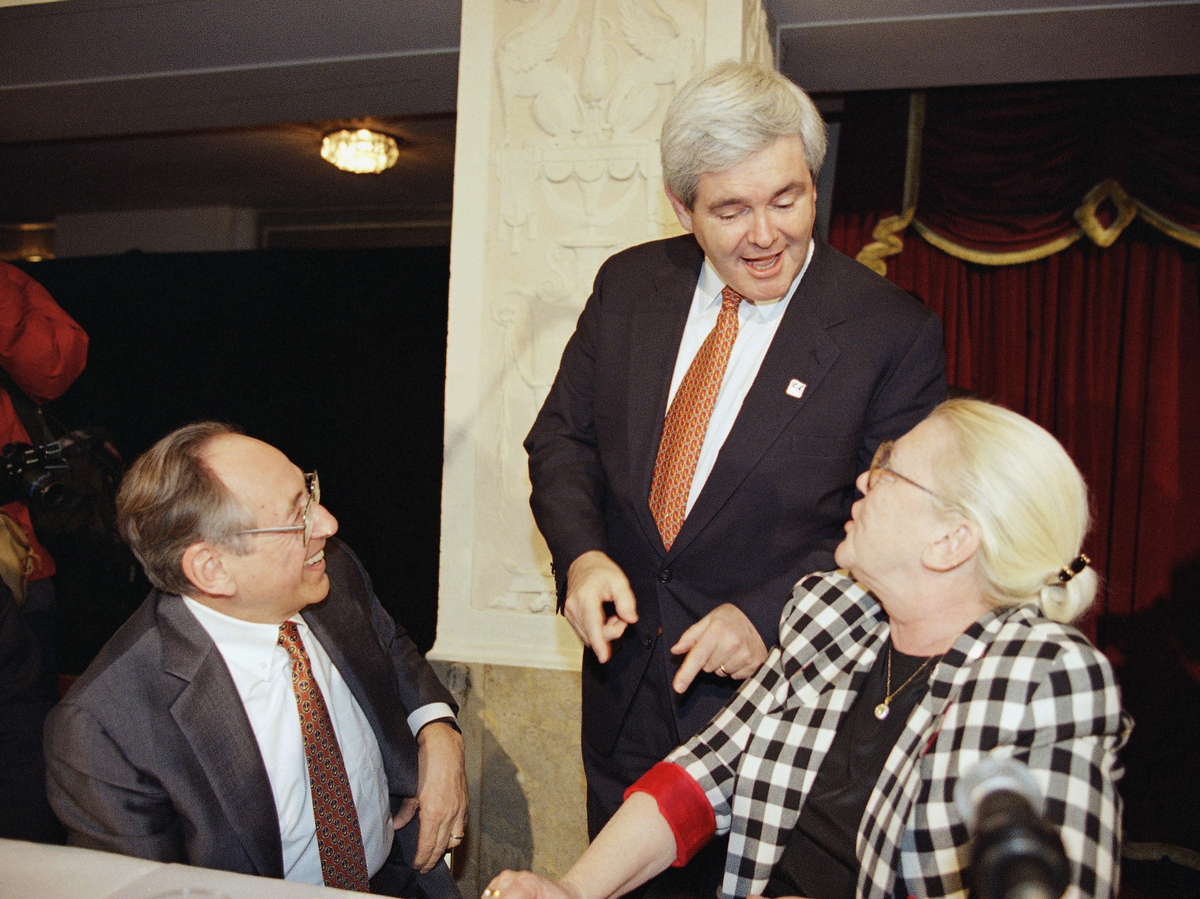 House Speaker Newt Gingrich talks with the Tofflers in 1994 in Washington, D.C.

At the core of Toffler's vision was that society wasn't just changing, but changing faster than it ever had before. He popularized the notion of "information overload" and wondered whether human beings could psychologically handle being bombarded by so much information and by change itself.

Toffler warned that people might be "doomed to a massive adaptational breakdown." While that might sound bleak, the tone of Toffler's books was more of a curious intellectual musing about what might happen, than a doomsday forecaster of inevitable emotional cataclysm. Here's how the introduction to Future Shock begins:

"This is a book about what happens to people when they are overwhelmed by change. It is about the ways in which we adapt — or fail to adapt — to the future. Much has been written about the future. Yet, for the most part, books about the world to come sound a harsh metallic note. These pages, by contrast, concern themselves with the 'soft' or human side of tomorrow. Moreover, they concern themselves with the steps by which we are likely to reach tomorrow. They deal with common, everyday matters — the products we buy and discard, the places we leave behind, the corporations we inhabit, the people who pass at an ever faster clip through our lives. The future of friendship and family life is probed. Strange new subcultures and life styles are investigated, along with an array of other subjects from politics and playgrounds to skydiving and sex.

"What joins all these — in the book as in life — is the roaring current of change, a current so powerful today that it overturns institutions, shifts our values and shrivels our roots. Change is the process by which the future invades our lives, and it is important to look at it closely, not merely from the grand perspectives of history, but also from the vantage point of the living, breathing individuals who experience it."

The book was the first in a trilogy that included the best-sellers The Third Wave and Powershift. Over his lifetime, Toffler's books not only sold millions of copies, they also influenced political leaders across China and Asia, Russia, and here in the U.S. Prominent entrepreneurs, technologists, and top executives sought Toffler's counsel as well. Ted Turner credits Toffler's works with inspiring him to start CNN in 1980, according to the Toffler Associates website.

Toffler began his career in journalism working in the manufacturing trade press. He went on to work for Fortune magazine and later wrote some highly regarded freelance magazine articles. As The New York Times notes: "His 1964 Playboy interview with the Russian novelist Vladimir Nabokov was considered one of the magazine's best."

While Toffler wrote that Future Shock was concerned more with the human condition than with the specifics of technological advancement, he still made some striking predictions about both. The Times puts it this way:

"His predictions about the consequences to culture, the family, government and the economy were remarkably accurate. He foresaw the development of cloning, the popularity and influence of personal computers and the invention of the internet, cable television and telecommuting."

At the same time, envisioning the future is a tricky business and not everything Toffler imagined has come to pass. This wasn't a surprise to him or to his wife and editor, Heidi Toffler. In a 2010 interview, she told NPR's Martin Kaste, "Anybody that tells you they know what's going to happen, don't believe a word they say!"

Toffler wrote in Future Shock that he wasn't making predictions, but more "first approximations of the new realities."

And while some people in modern society these days undoubtedly feel overwhelmed by information overload, others have adapted. As Kaste reported at the time:

"The accelerating change doesn't seem to be driving people crazy, as was predicted by Future Shock. Alvin Toffler says it may be that younger generations have simply become more adapted to change, that it is their culture.

"Academic futurist Stuart Candy says the Tofflers were wrong to predict widespread 'future shock,' as a form of societal illness or breakdown. Candy, who has a Ph.D in the field of "futures studies," and who bought his first copy of Future Shock at a yard sale when he was 15, says the book did make an important contribution.

" 'What Future Shock got right was that it made a compelling argument for taking the acceleration of change seriously,' Candy says. And he says the value of the book was to teach people that the best defense against the future is to think about it, to imagine different scenarios, and try to avoid being taken by surprise."

Toffler was born in New York in 1928 and grew up in Brooklyn. His parents were polish immigrants. From an early age he wanted to write poetry and fiction. He graduated from with a degree in English from New York University, where he met his future wife and writing partner, Adelaide Elizabeth Farrell (who went by the nickname Heidi.) But Toffler's desire for real-world experience led him to take a job in manufacturing. The Times writes:

"Like the writers he most admired, Mr. Toffler wanted experiences to report on. 'Steinbeck went to pick grapes,' he said. 'Jack London sailed ships.'

"The couple decided to move to Cleveland, then at the very center of industrial America. They were married there on April 29, 1950, by a justice of the peace whom Mr. Toffler described as a 'roaring drunk.' They lived on the city's west side and took production jobs in separate factories.

"Mr. Toffler learned to weld and repair machinery and came to understand in the most personal way the toll that physical labor can have on industrial workers. He broke a vertebra when a steel beam he was helping to unload twisted unexpectedly and fell on him."

Toffler is survived by his wife and by a sister, Caroline Sitter.