Accessibility links
Nonstop Flight: How The Frigatebird Can Soar For Weeks Without Stopping : The Two-Way Scientists have been attaching transmitters on the huge seagoing birds and are astonished by their ability to stay aloft. 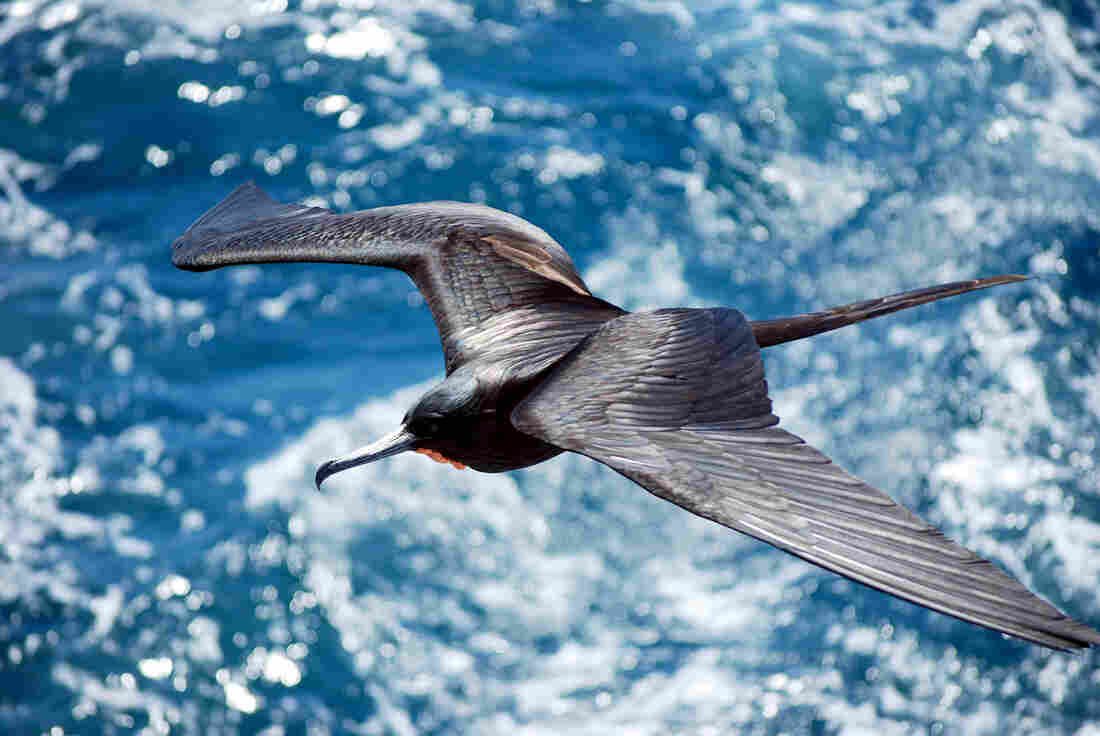 Frigatebirds have to find ways to stay aloft because they can't land on the water. This bird was flying between the Galapagos islands of Santiago and Bartolome. Harvey Barrison/Flickr hide caption 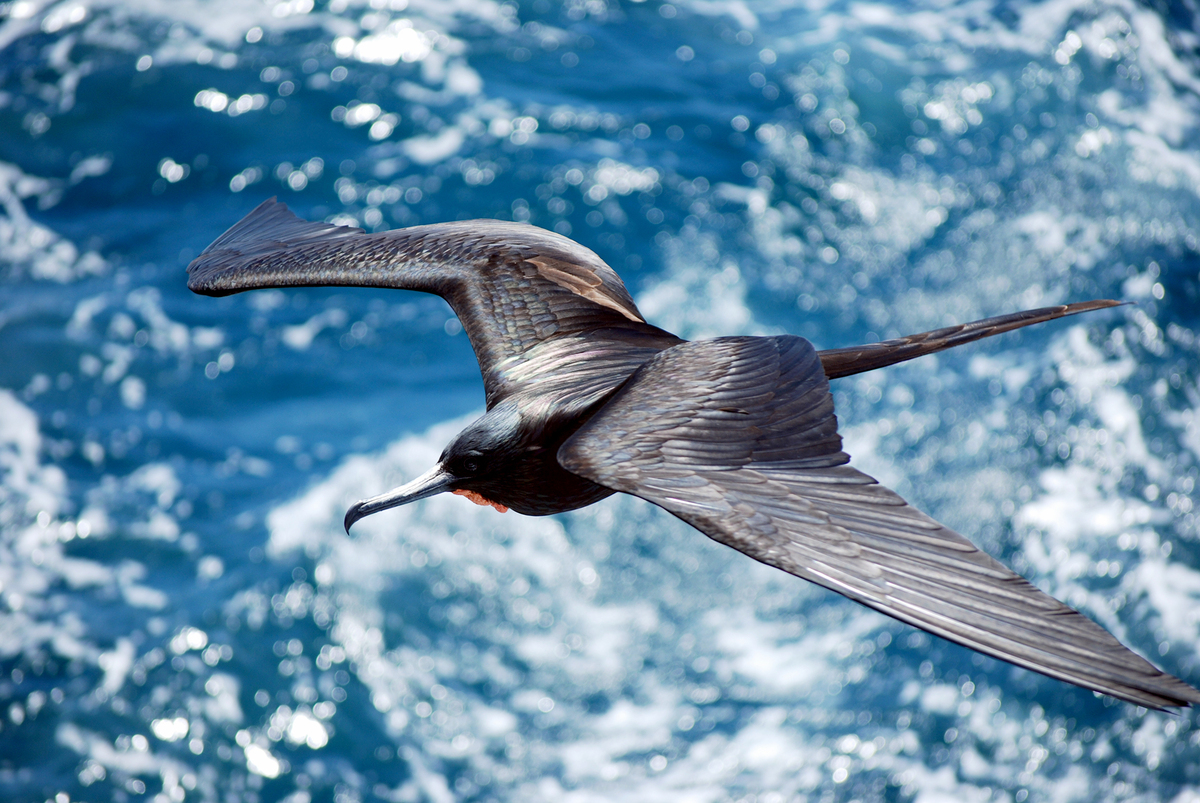 Frigatebirds have to find ways to stay aloft because they can't land on the water. This bird was flying between the Galapagos islands of Santiago and Bartolome.

Frigatebirds, seagoing fliers with a 6-foot wingspan, can stay aloft for weeks at a time, a new study has found. The results paint an astonishing picture of the bird's life, much of which is spent soaring inside the clouds.

Frigatebirds are unique among aquatic birds. Their feathers are not waterproof, so they can't rest on the waves. Males sport a vivid red pouch along their throats that they inflate when trying to attract females. They're known for stealing food from other seabirds.

Since the frigatebird spends most of its life at sea, its habits outside of when it breeds on land aren't well-known — until researchers started tracking them around the Indian Ocean. What the researchers discovered is that the birds' flying ability almost defies belief.

Ornithologist Henri Weimerskirch put satellite tags on a couple of dozen frigatebirds, as well as instruments that measured body functions such as heart rate. When the data started to come in, he could hardly believe how high the birds flew.

"First, we found, 'Whoa, 1,500 meters. Wow. Excellent, fantastique,' " says Weimerskirch, who is with the National Center for Scientific Research in Paris. "And after 2,000, after 3,000, after 4,000 meters — OK, at this altitude they are in freezing conditions, especially surprising for a tropical bird."

Four thousand meters is more than 12,000 feet, or as high as parts of the Rocky Mountains. "There is no other bird flying so high relative to the sea surface," he says. 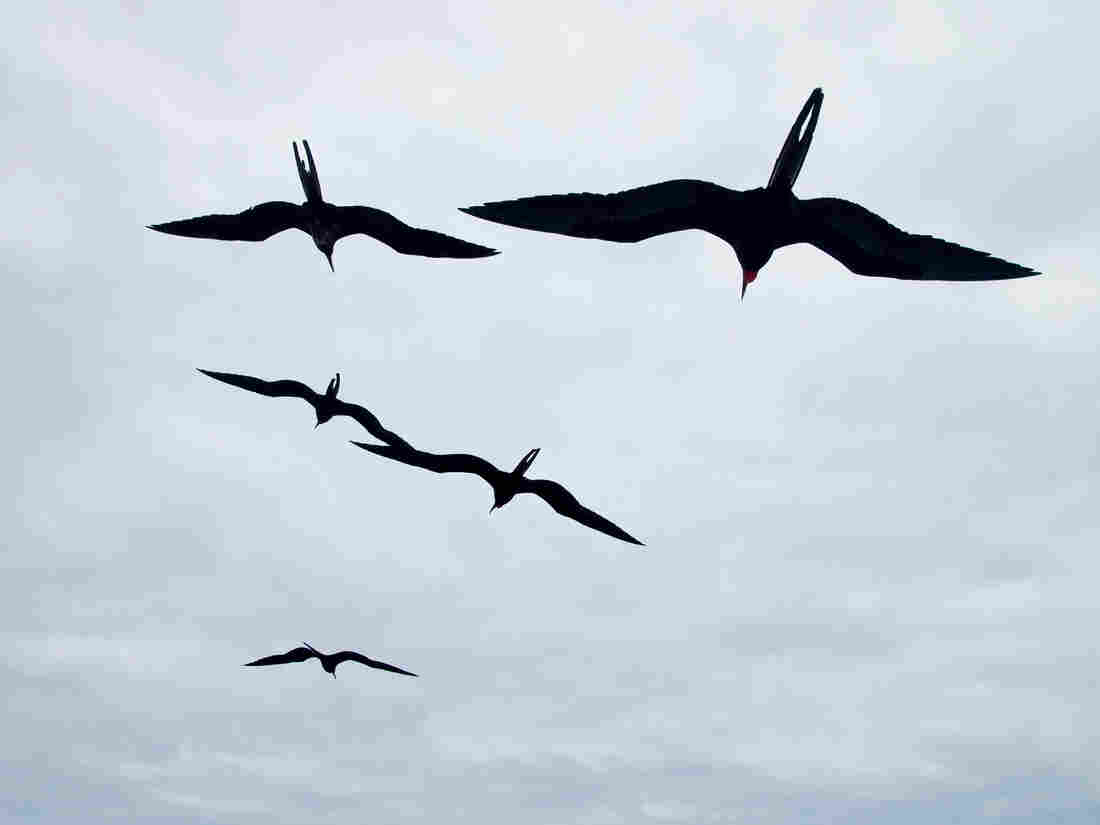 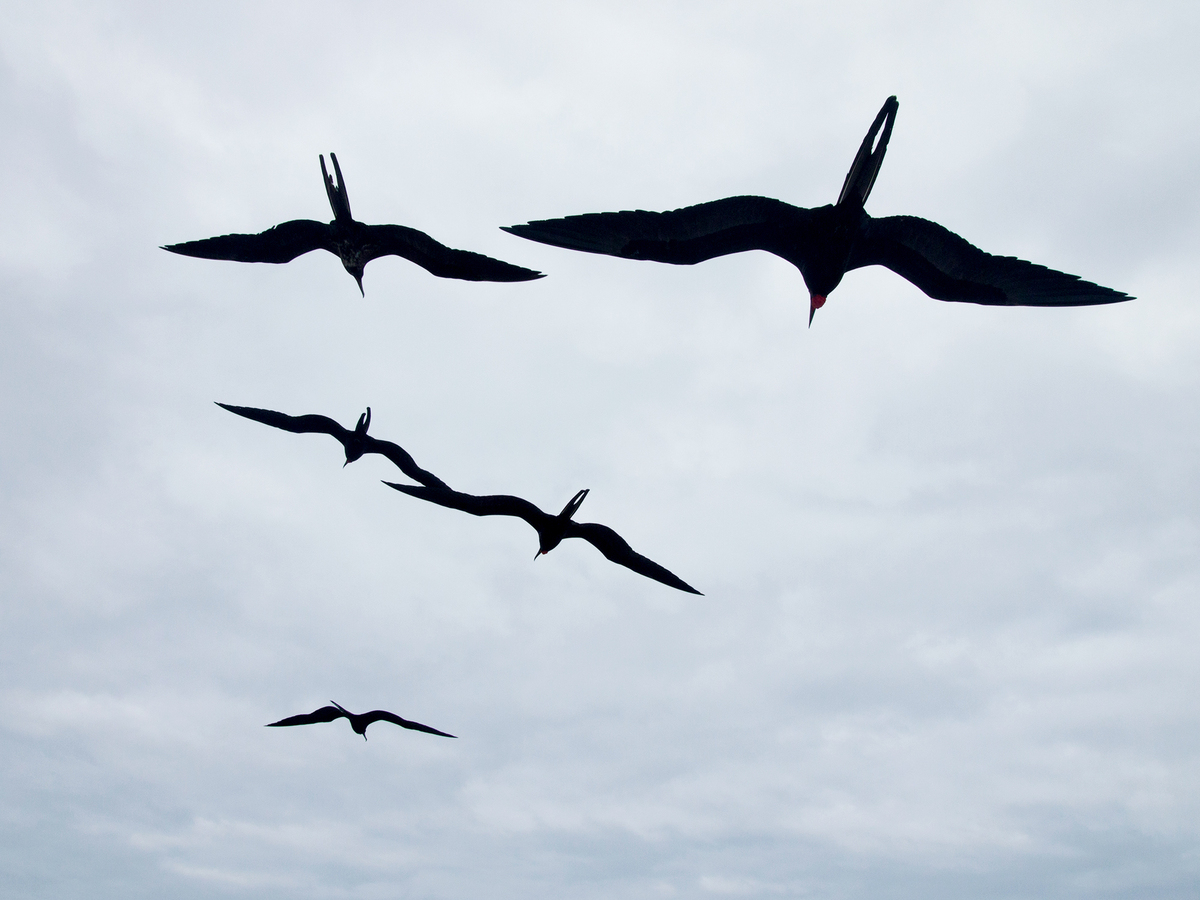 One of the frigatebirds that researchers tagged soared 40 miles over the Indian Ocean without a wing-flap. These birds were photographed in the Galapagos.

Weimerskirch says that kind of flying should take a huge amount of energy. But the instruments monitoring the birds' heartbeats showed that the birds weren't even working up a sweat. (They wouldn't, actually, since birds don't sweat, but their heart rate wasn't going up.)

How did they do it? By flying into a cloud.

"It's the only bird that is known to intentionally enter into a cloud," Weimerskirch says. And not just any cloud — a fluffy, white cumulus cloud. Over the ocean, these clouds tend to form in places where warm air rises from the sea surface. The birds hitch a ride on the updraft, all the way up to the top of the cloud.

Frigatebirds have to find ways to stay aloft because they can't land on the water. Since their feathers aren't waterproof, the birds would drown in short order. They feed by harassing other birds in flight until they regurgitate whatever fish they've eaten and the frigatebird takes it. Or they fly over a fish-feeding frenzy on the ocean surface and scoop up small fish that leap out of the water to escape larger fish.

In one case, for two months — continuously aloft.

"Absolutely incredible," says Curtis Deutsch, an oceanographer at the University of Washington. "They're doing it right through these cumulus clouds. You know, if you've ever been on an airplane, flying through turbulence, you know it can be a little bit nerve-wracking."

One of the tagged birds soared 40 miles without a wing-flap. Several covered more than 300 miles a day on average, and flew continuously for weeks. They are blessed with an unusual body. No bird has a higher ratio of wing surface area compared with body weight — something called "wing loading."

Writing in the journal Science, the researchers discovered that frigatebirds have also capitalized on a lucky coincidence. Winds that form these updrafts in the atmosphere also disrupt waves at the sea surface.

"We found that there's a remarkably good correspondence between those two things," Deutsch says. And when the regularity of waves is disrupted, deeper water rises to the surface, carrying with it things such as phytoplankton that attract small fish. The small fish attract bigger fish, which creates the feeding frenzy that frigatebirds need to dine.

So it seems the life of a frigatebird is simply hopping off at the bottom of this atmospheric roller coaster, eating and getting back on again to search for the next meal.