Accessibility links
Mississippi Law Protecting Religious Objections To Gay Marriage Is Blocked By Judge : The Two-Way Late Thursday night, shortly before the controversial law was set to take effect, a federal judge ruled it unconstitutional. He called it an "attempt to put LGBT citizens back in their place." 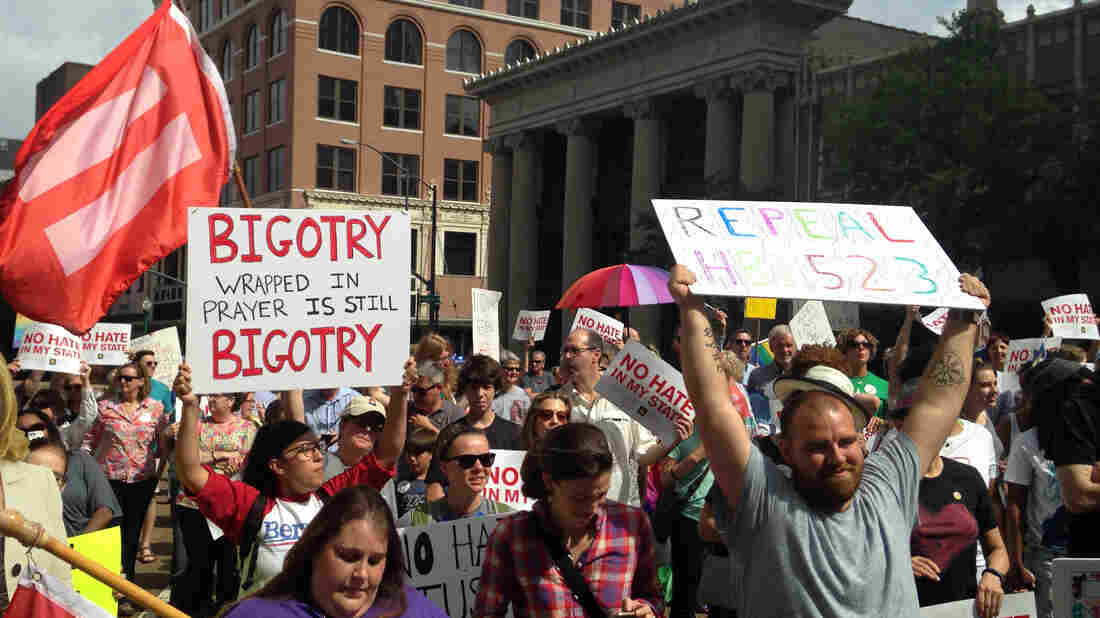 Protesters march on May 1, seeking repeal of a Mississippi law allowing religious groups and some private businesses to deny services to same-sex couples, transgender people and others. A federal judge ruled the law unconstitutional late Thursday. Jeff Amy/AP hide caption 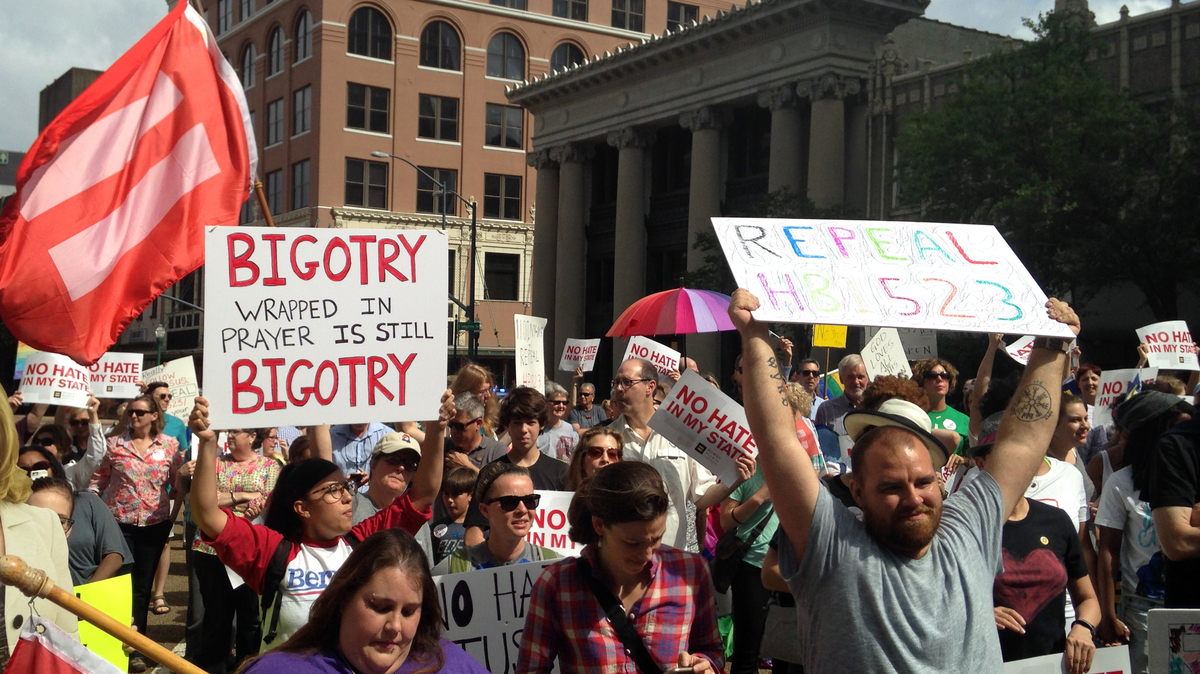 Protesters march on May 1, seeking repeal of a Mississippi law allowing religious groups and some private businesses to deny services to same-sex couples, transgender people and others. A federal judge ruled the law unconstitutional late Thursday.

Almost at the last minute, a federal judge has declared a controversial Mississippi law unconstitutional.

The law, HB 1523, would have protected religious objections to gay marriage, extramarital sex and transgender identities. The judge says it favors some religious beliefs over others and would codify unequal treatment of LGBT people.

The state's governor has said he looks forward to an appeal, but Mississippi's attorney general has expressed hesitation over appealing the case.

As the Two-Way has previously reported, the "Protecting Freedom of Conscience from Government Discrimination Act" was described by its proponents as a religious freedom bill. But it didn't protect all religious beliefs. Here's Section 2 of the bill:

"The sincerely held religious beliefs or moral convictions protected by this act are the belief or conviction that:

"(a) Marriage is or should be recognized as the union of one man and one woman;

"(b) Sexual relations are properly reserved to such a marriage; and

"(c) Male (man) or female (woman) refer to an individual's immutable biological sex as objectively determined by anatomy and genetics at time of birth."

Under the law, Mississippi residents who used one of those moral convictions to justify behavior — including individuals declining to offer business or medical services; religious organizations firing or disciplining employees; and state employees refusing to license marriages — could not be punished by the state.(Many of these forms of discrimination against gay and trans people are currently legal in Mississippi, and in many other states. For instance, business owners in Mississippi can already refuse to bake a cake for a gay couple without breaking the law.)

U.S. District Judge Carlton Reeves ruled on Monday on one portion of the law, and declared that state employees could not deny marriage licenses based on religious objections.

On Thursday night, Reeves went further and ruled on the law as a whole. He said that instead of protecting religious freedom, it violated the First Amendment by essentially endorsing specific religious beliefs over others. Some of the plaintiffs in the case were religious leaders from denominations that do not object to gay marriage.

He also said the law was poised to cause irreparable harm to LGBT residents of Mississippi.

It is difficult to see the compelling government interest in favoring three enumerated religious beliefs over others.

"There are almost endless explanations for how HB 1523 condones discrimination against the LGBT community, but in its simplest terms it denies LGBT citizens equal protection under the law," Reeves wrote.

He also noted that many of the protections offered by the law — the reasons proponents saw it as necessary — were already provided by the First Amendment and Mississippi's own Religious Freedom Restoration Act.

Supporters of the bill had previously said they hoped for an appeals court decision should Reeves rule against them, Mississippi Today reports:

" 'The bill, all it was ever intended to do is protect the religious liberties of everyone in the state,' said State Senator Jenifer Branning (R-Leake), who sponsored the bill, when asked on Tuesday what would happen if it is overturned. 'So I think that's what it does. I'm confident it will be appealed to the [Fifth Circuit]. So we'll see what happens there.' "

On Friday, Gov. Phil Bryant said in a statement that he "look[s] forward to an aggressive appeal."

All it was ever intended to do is protect the religious liberties of everyone in the state ...

State Attorney General Jim Hood, who was named in the lawsuit and tasked with defending the law, spoke to NPR's Morning Edition before the judge's decision was announced. He said that from his perspective, the law "doesn't accomplish anything," because it doesn't grant anyone rights they didn't already have. He also criticized the litigation costs it presents — but said he's doing his job.

"When a law is passed for political reasons, there are impacts of it. My job is to separate my mind from my emotion and make my decisions whether I defend it or not, and I do my duty," he said.

In a statement on Friday, after Bryant announced he was anticipating an appeal, Hood expressed hesitation about an appeal.

"The fact is that the churchgoing public was duped into believing that HB 1523 protected religious freedoms," he said. He said, for instance, that some leaders suggested that without the law, pastors would be forced to marry gay couples, something no court has ever supported.

I will have to think long and hard about spending taxpayer money to appeal the case ...

"I hate to see politicians continue to prey on people who pray, go to church, follow the law and help their fellow man," Hood wrote. "In consideration of the individual rights of all our citizens, the state's current budget crisis and the cost of appeal, I will have to think long and hard about spending taxpayer money to appeal the case against me."

Susan Hrostowski, one of the plaintiffs in the case, also spoke to Morning Edition after the decision was announced.

"I'm an Episcopal priest, and I'm kind of crazy about the gospel, and I'm crazy about Jesus. And his message was that we should love one another, so I found this bill to be offensive from that perspective," she said. "But then also, as a lesbian — I've been with my wife for 27 years now, and we have a son. And so for both of those reasons, I just fought to make sure that people like me weren't mistreated in the state of Mississippi."

She said she was elated with the decision, and remembered back to a moment during the hearing when the case of Obergefell v. Hodges — the Supreme Court case that legalized gay marriage in all 50 states — came up:

"The judge was asking the state, what were the nonreligious reasons for this bill? And they said, 'Well, Obergefell tipped the tables of justice away from people who are against gay marriage.'

"And Judge Reeves said, 'Well, isn't that like saying Brown v. Board of Education tipped the tables away from segregationists?'

"You know, when you have an oppressed population and they make some gains, that doesn't mean the oppressor has the right to retaliate. ...

"Everyone has the right to their own religious beliefs. But not to the point that practicing those would impinge on my beliefs, and on my freedoms."

You can hear Hrostowski's interview with David Greene, as well as a previous conversation with Mississippi Attorney General Jim Hood, here: