Accessibility links
Bangladesh In Mourning After Gunmen Kill 20 Hostages In A Cafe : The Two-Way The victims include at least nine Italian and seven Japanese nationals. Now, Bangladeshis fear this attack, which happened in the posh neighborhood of Gulshan, is "just a sign of things to come." 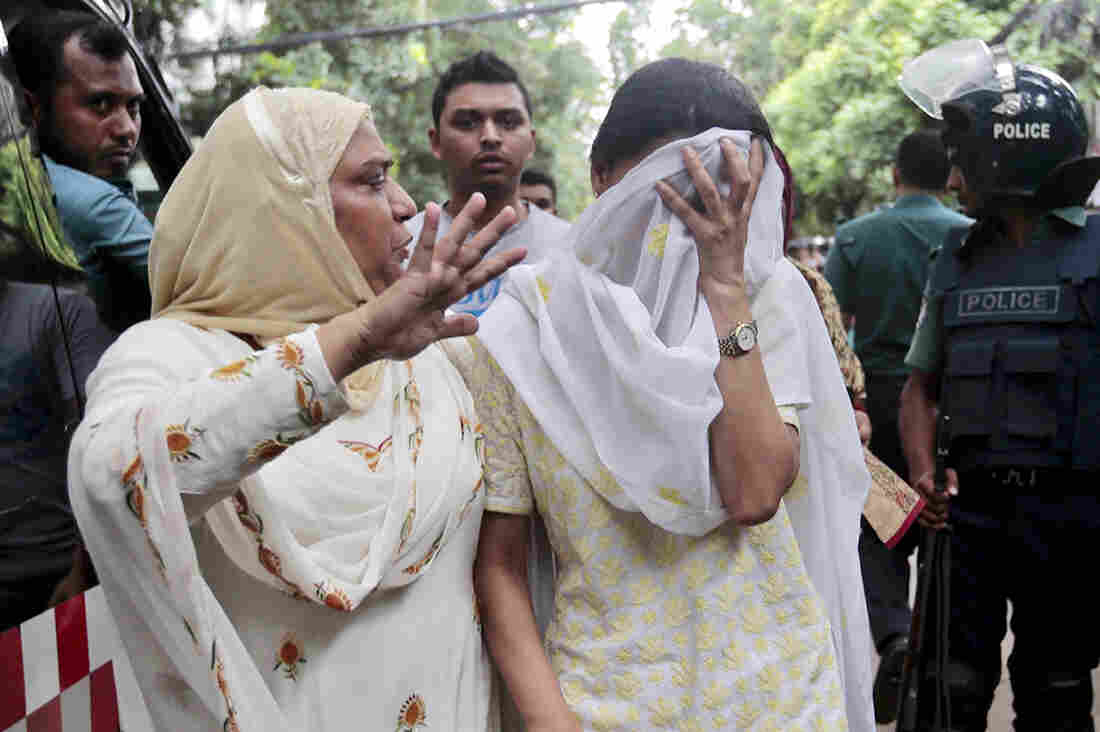 A relative tries to console Semin Rahman (covering face), whose son is missing after militants took hostages in a restaurant popular with foreigners in Dhaka, Bangladesh. AP hide caption 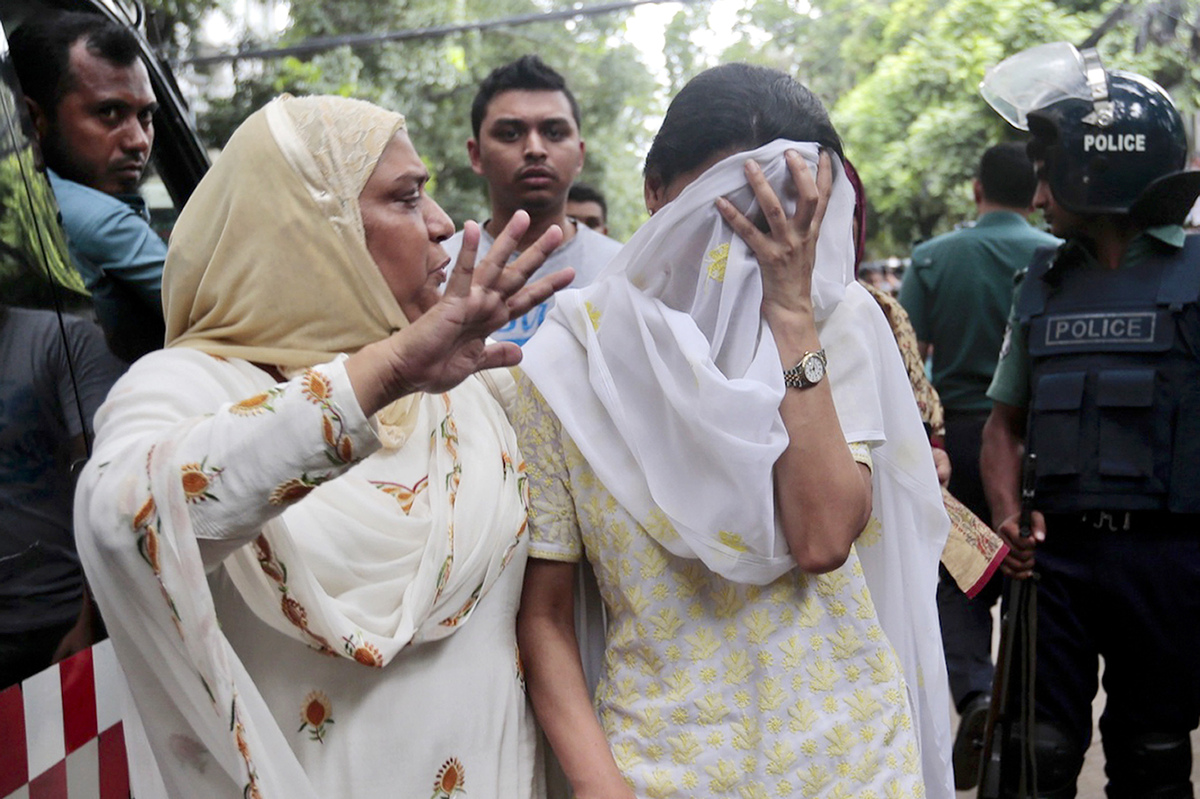 A relative tries to console Semin Rahman (covering face), whose son is missing after militants took hostages in a restaurant popular with foreigners in Dhaka, Bangladesh.

Bangladeshi forces raided an upscale cafe early Saturday in the capital, Dhaka, ending an hours-long standoff with a group of gunmen.

The Bangladeshi military said 20 civilians were killed, along with two police officers and six attackers. Police arrested one of the militants at the scene.

The gunmen stormed into the Holey Artisan Bakery café late Friday and took a group hostage, including foreigners. The posh neighborhood called Gulshan is home to many foreign embassies.

Bangladesh's prime minister Sheikh Hasina has announced two days of national mourning, as the BBC reported. In a televised address, she vowed to eradicate terrorism. As we reported, she also said security forces rescued 13 of the hostages from the cafe.

Now, the atmosphere in the neighborhood is eerie and frightening, as Syed Zain al-Mahmood of the Wall Street Journal told Weekend Edition Saturday. He described the scene:

"When we've been close to the scene, we've seen streets completely empty, stores shuttered, people have closed their windows, drawn their curtains. No one out and about. A very, very heavy police presence with armored carriers. And of course, the sound of sustained gunfire."

Bangladesh has seen a recent string of attacks on secular writers and religious minorities. Those previous attacks targeted individuals. Mahmood said Friday's attack "was something that's new to Bangladesh – an armed group storming a very popular café and taking hostages." 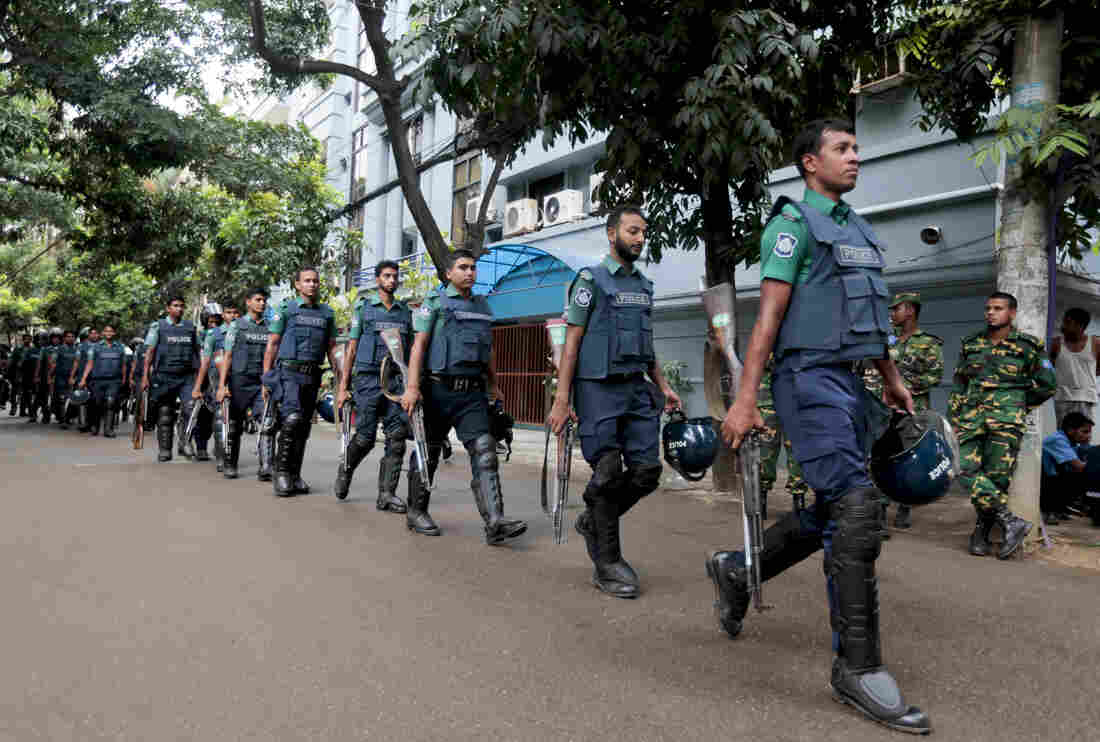 Bangladeshi policemen patrol the area around the site of the attack in Dhaka, Bangladesh, on Saturday. A.M. Ahad/AP hide caption

Italian Foreign Minister Paolo Gentiloni said nine Italians have been "confirmed dead" from the attack, Italian news agency ANSA reported. "We have identified nine (Italians) killed, there is another person who is missing and could be hiding himself or could be among wounded people ... we are looking for him," Gentiloni told reporters, according to Reuters.

Chief Cabinet Secretary Yoshihide Suga said seven Japanese nationals were killed in the attack, according to the country's public broadcaster NHK. Japan's Prime Minister Shinzo Abe had earlier described the group as "people who have devoted themselves to Bangladesh's development." Abe added that another Japanese man was "wounded, but rescued."

At least three students attending U.S. universities are among the victims. Emory University said in a statement that undergraduate student Abinta Kabir and business school student Faraaz Hossain were killed during the attack. The statement said Kabir was from Miami and Faraaz was from Dhaka, without specifying either of their nationalities. "The Emory community mourns this tragic and senseless loss of two members of our university family," it added.

Our thoughts and prayers go out on behalf of Faraaz and Abinta, their friends and family for strength and peace at this unspeakably sad time

Indian Minister of External Affairs Sushma Swaraj said 19-year-old Indian national Tarishi Jain was killed in the attack. She added that Jain studied at the American International School in Dhaka and was currently a student at U.C. Berkeley.

A statement from Berkeley said Jain "was working on e-commerce growth at Eastern Bank Limited in Dhaka through an internship with UC Berkeley's Subir and Malini Chowdhury Center for Bangladesh Studies." Sanchita Saxena, executive director of Berkeley's Institute for South Asia Studies, called Jain "a smart and ambitious young woman with a big heart."

The Islamic State militant group claimed responsibility for the attack in a statement through its Aamaq news agency, though U.S. officials have not been able to independently verify that claim. There are multiple armed groups operating in Bangladesh.

And as Mahmood reported, "The Bangladeshi government line out of Dhaka has very much been that Islamic State and al-Qaida don't have a presence in Bangladesh, and that [recent attacks are] domestic political opposition making mischief."

He added that Friday's dramatic attack are stoking concerns that "this is just a sign of things to come." Here's more:

"The security analysts who have been following these terror attacks, and journalists like myself, have been fearing this for a while, because these groups have gotten more and more sophisticated. And yesterday's attack shows that they have the training and the weapons to carry out attacks of this style in an area which is heavily guarded. There are police checkpoints on all sides, but these militants were able to get in with weapons and carry out this attack in a brazen manner."

As CNN reported, the Bangladeshi government is trying to crack down on militant activity after the recent string of attacks. Last month, authorities launched raids and arrested thousands of people, including "145 suspected Islamist militants."