Accessibility links
FBI Recommends No Charges For Hillary Clinton In Email Server Case : The Two-Way FBI Director James Comey said the agency did not find clear evidence that Clinton intended to violate the law, but that she and her staff were "extremely careless" in handling sensitive information. 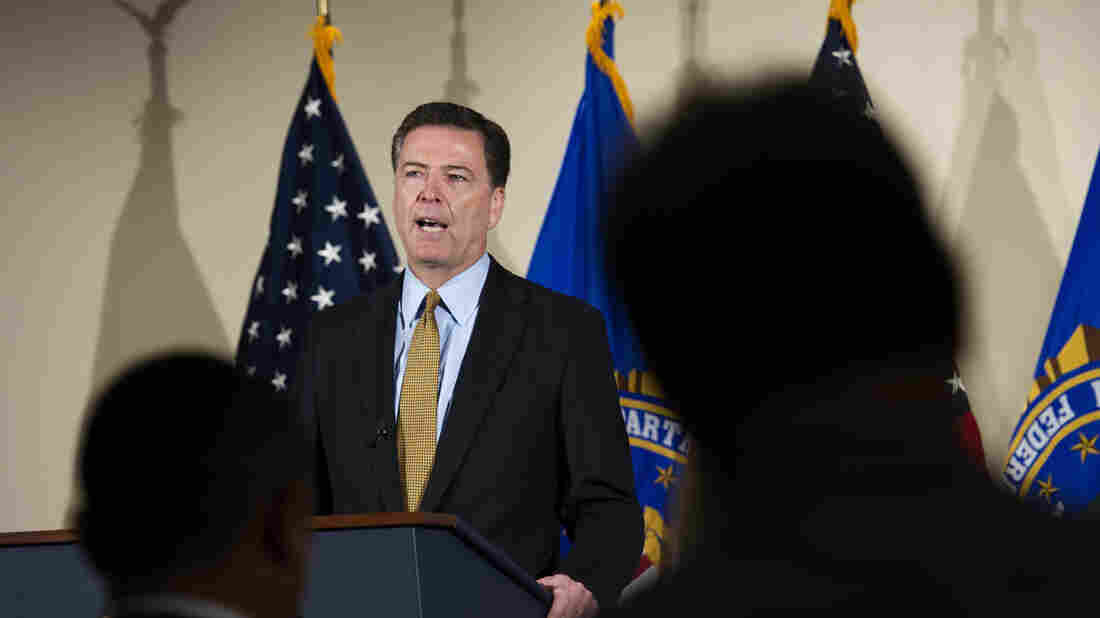 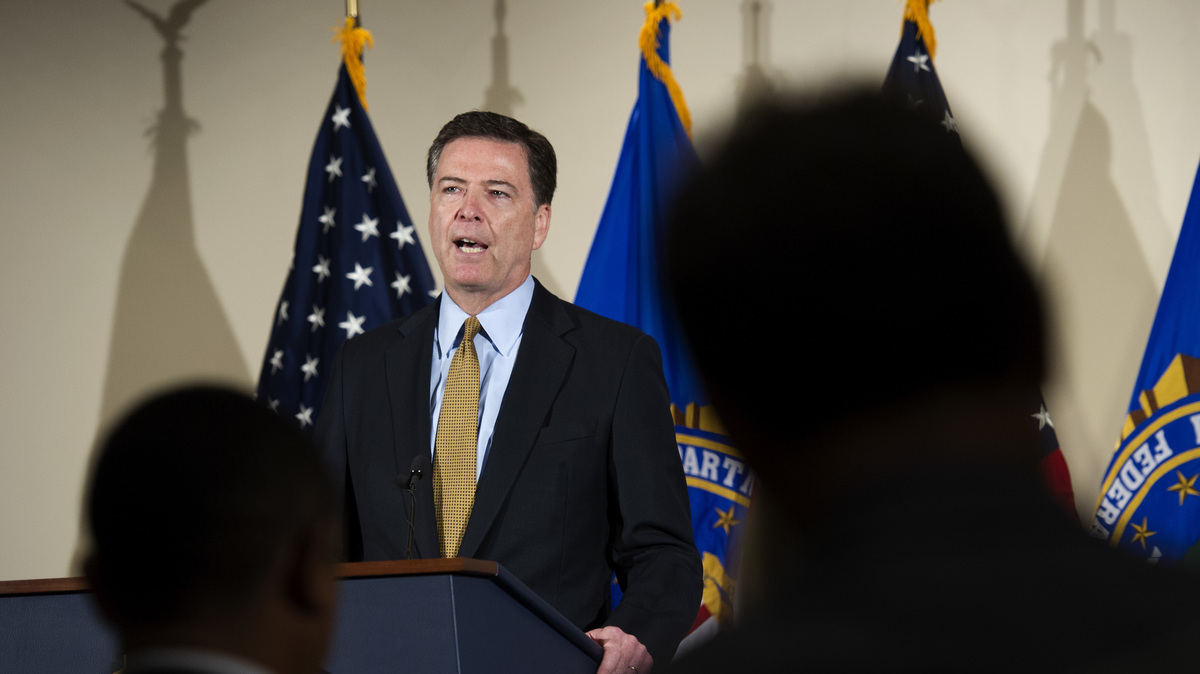 Hillary Clinton and her staff were "extremely careless" in handling classified data over a private email server while she was secretary of state, FBI Director James Comey said Tuesday — but the FBI is recommending that no charges be brought against her.

Comey said his agency found more than a hundred emails that contained information that was classified at the time they were sent and received — emails that should not have been on "any kind of unclassified system," Comey said.

He also said the FBI considered it possible that Clinton's email domain had been hacked by a "hostile actor."

But Comey said their evidence points to carelessness instead of intentional violations — and given that, they do not suggest criminal charges.

Clinton's use of a personal email account and private server to conduct official business has already been criticized by the State Department's independent watchdog group as a violation of department policy.

Clinton has said that she never used her personal email to send information that was marked classified at the time, although some of her emails had been retroactively classified.

Comey says that's not true. Of 30,000 emails Clinton turned over to the State Department in 2014, FBI investigators found 110 emails containing information that was classified at the time the email was sent. Eight of those were top secret, the highest level of classification.

A small number of those emails were explicitly marked as classified, Comey said.

None of that classified content should ever have been sent on any kind of unclassified system, Comey said. He further pointed out that Clinton's personal email setup involved no full-time security staff — like she would have benefited from if she had been on a government system, or even just on Google's Gmail service.

Another 2,000 emails have been retroactively classified since they were sent, Comey said.

And by poring over email fragments on servers and accessing the email archives of government employees, investigators also found several thousand work-related emails that were not included in the 30,000 emails Clinton released to the State Department in 2014. Three of those newly discovered emails contained classified information.

But, Comey said, the FBI did not find any indication that those emails had been intentionally concealed from investigators.

"Our assessment is that, like many email users, Secretary Clinton periodically deleted emails or emails were purged from the system when devices were changed," Comey said. "Because she was not using a government account — or even a commercial account like Gmail — there was no archiving at all of her emails, so it is not surprising that we discovered emails that were not on Secretary Clinton's system in 2014, when she produced the 30,000 e-mails to the State Department."

Comey also said that, while the FBI found no direct evidence that Clinton's email was hacked by a foreign party, "it is possible that hostile actors gained access to Secretary Clinton's personal email account."

Cyberattacks on Clinton's email would be so sophisticated that investigators wouldn't be likely to see traces of them, Comey said. And since Clinton frequently used her private email while traveling "in the territory of sophisticated adversaries," as Comey put it, the FBI views it as possible that her account was compromised.

Investigators did find evidence that "hostile actors gained access to the private commercial email accounts of people with whom Secretary Clinton was in regular contact from her personal account," he said.

Comey had harsh words for the carelessness on display by Clinton, her staff and the State Department in general.

But, he said, "although there is evidence of potential violations of the statutes regarding the handling of classified information, our judgment is that no reasonable prosecutor would bring such a case."

In "similar circumstances," someone might face security or administrative sanctions, he said, but not criminal charges.

As a result, the FBI is recommending to Justice Department prosecutors that no charges be brought against Clinton.

In a statement, Hillary Clinton's campaign spokesman Brian Fallon said her team is "pleased that the career officials handling this case have determined that no further action by the Department is appropriate."

"As the Secretary has long said, it was a mistake to use her personal email and she would not do it again," Fallon said. "We are glad that this matter is now resolved."

"Declining to prosecute Secretary Clinton for recklessly mishandling and transmitting national security information will set a terrible precedent," Ryan said in a statement.

This outcome is not unusual, as NPR's Carrie Johnson has reported: Top officials rarely face criminal prosecution for violating laws on classified information.

But Tuesday's press conference was out of the ordinary in another way.

FBI recommendations to prosecutors aren't usually released to the public, as Comey said, but this case has been subject to an extraordinary level of scrutiny.

The FBI announcement — which, Comey said, had not been coordinated with or preapproved by the Justice Department — comes less than a week after a controversial unscheduled meeting between U.S. Attorney General Loretta Lynch and former President Bill Clinton. Lynch said the meeting was innocuous, and didn't include any conversations about the investigation into Hillary Clinton.

But after bipartisan furor over the encounter, Lynch announced she would be accepting the recommendations of career prosecutors and the FBI in the case.