Accessibility links
Video Of Alton Sterling's Fatal Shooting By Baton Rouge Police Sparks Protests, FBI Inquiry : The Two-Way In the video, Alton Sterling is on the ground when one of the officers kneeling over him yells "He's got a gun!" Then at least one officer draws a weapon from his holster. The FBI is investigating. 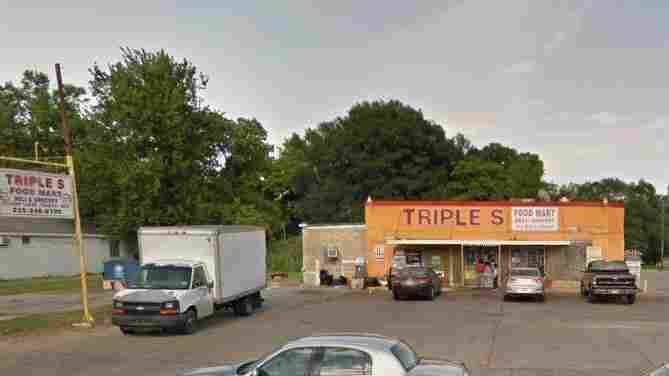 The Triple S convenience store was the scene of a shooting shortly after midnight Tuesday — and the site of protests later that day, after video of a police-involved shooting circulated. Google Maps/Screenshot by NPR hide caption 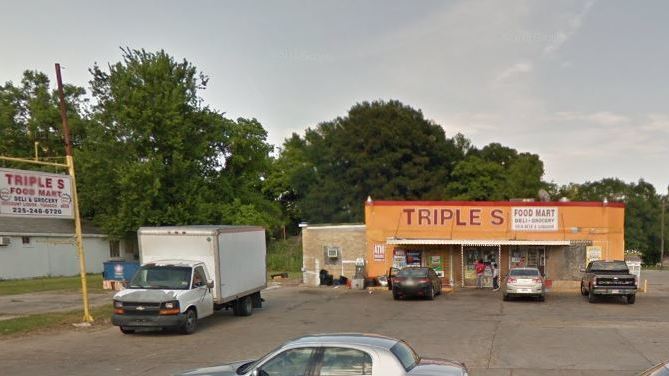 The Triple S convenience store was the scene of a shooting shortly after midnight Tuesday — and the site of protests later that day, after video of a police-involved shooting circulated.

The Justice Department is investigating the killing of Alton Sterling, a 37-year-old black man who was shot to death early Tuesday after police were called to a convenience store in Baton Rouge, La. Witnesses captured the encounter on a cellphone video that shows two officers had Sterling on the ground at the time of the shooting.

The FBI is opening a civil rights investigation into Sterling's death, NPR's Carrie Johnson reports, citing a statement from the Justice Department that says it is seeking a "fair, thorough and impartial investigation."

Baton Rouge Police Chief Carl Dabadie said Wednesday that the two officers involved in the shooting are on administrative leave, and that after conducting initial investigations, his department has turned the entire case over to U.S. attorneys and the FBI. The local district attorney said his office was not investigating the shooting either, leaving that to the Justice Department.

NPR's Martin Kaste reports that while criminal investigations are being conducted at the federal level, the local police department is still required by law to perform an internal administrative investigation into whether the officers should be disciplined or fired.

The two officers were identified as Blane Salamoni, a four-year veteran of the force, and Howie Lake II, a three-year veteran.

In the 48-second video that was filmed from a nearby car, the officers are kneeling over Sterling, who is lying on the ground, when one is heard yelling, "He's got a gun! Gun!" At least one officer then draws a weapon from his holster and aims it at Sterling. Seconds later, shots are heard.

After that video emerged Tuesday, it helped propel protests that involved dozens of people — many of them blocking the street where the shooting occurred.

The shooting took place at the Triple S Food Mart on Baton Rouge's North Foster Drive around 12:35 a.m. Tuesday. That's when uniformed officers responded to a disturbance call that Baton Rouge police say came from someone who said "a black male who was selling music [CDs] and wearing a red shirt threatened him with a gun."

The department says that after its officers made contact with Sterling in the convenience store's parking lot, "an altercation between Sterling and the officers ensued. Sterling was shot during the altercation and died at the scene."

We'll include the video here with this warning: The video shows an intense scene that ends with gunfire. You can also see it online.

The Daily Beast has published what it identifies as a second video of the shooting, recorded from a different angle and closer proximity. Warning: the video is more graphic than the one above.

From the original video and witness accounts, it seems that the officers initially used a Taser on Sterling. The owner and manager of the Triple S store is Abdullah Muflahi. He tells local newspaper The Advocate that the officers retrieved a gun from Sterling's pocket — but, Muflahi says, he didn't see the man's hands go near his pockets during the struggle.

Muflahi, who tells The Advocate that Sterling had been selling CDs outside his store for several years, said the man was shot several times.

"Sterling appeared to die quickly, Muflahi said. Just after the killing, the officer who fired the bullets cursed, and both officers seemed like they were 'freaking out,' Muflahi said.

"The store owner said he heard one of the officers say, 'Just leave him.' "

Several public figures have issued statements about the incident — including U.S. Rep. Cedric Richmond, D-La., who said the video "was deeply troubling and has understandably evoked strong emotion and anger in our community."

Some Key Facts We've Learned About Police Shootings Over The Past Year April 13, 2015

"There are a number of unanswered questions surrounding Mr. Sterling's death," Richmond said, "including questions about the initial calls for police presence, the level of force used by officers, the verbal and physical altercation, and the response of the officers after he was shot."

At a press conference, Baton Rouge District Attorney Hillar Moore said his office is not conducting its own investigation into the shooting.

"Their request to me is that I stand down and let them do their investigation whether it's a civil rights violation or potential ... criminal penalty, and I'm going to abide by that request," he said.

As The Associated Press notes, there's a high bar for federal charges in cases like this:

"Similar investigations, which often take many months, were opened following the deaths of Michael Brown in Ferguson, Missouri, and Eric Garner in New York.

"Federal investigators must meet a high legal burden to bring a civil rights prosecution, establishing that an officer knowingly used unreasonable force under the circumstances and did not simply make a mistake or use poor judgment. Many federal probes conclude without criminal charges."

At the same press conference, Louisiana Gov. John Bel Edwards called the video "disturbing" but urged for calm in the community — as did a local religious leader, the police chief, the district attorney and the mayor.

"We are an inclusive community," Mayor Kip Holden said. "We have a wound right now, but we'll be healing, and making this city and parish whole again."

The president of the Baton Rouge chapter of the NAACP, Mike McClanahan, is calling for the officers to be arrested on capital murder charges, adding later that there's a need "to root out the 1 percent of bad police officers."

Edmond Jordan, an attorney representing Sterling's family — including Quinyetta McMillon, who has a 15-year-old son, Cameron, with Alton Sterling — began his remarks today by thanking God for Apple, Google and Microsoft, a reference to the technology that helped bring details of Sterling's shooting to light.

Jordan then started his remarks with a pointed criticism of the police.

"One of the first things the Baton Rouge Police Department did," Jordan said, was "to go and confiscate the video system from Triple S Food Mart."

Citing a statement from the store's owner, Jordan said that Abdullah Muflahi was ordered to sit in his car outside the store while police took the equipment, and that he was not presented with a search warrant.

"He's confident that his video ... shows the entire incident," Jordan said, before urging local authorities to hand the case over to the Louisiana State Police.

Describing Alton Sterling, McMillon said he "is not what the mass media is making him out to be." She said Sterling had been trying to earn a living — and that the officers had taken away a father whose children relied on him.

As McMillon mentioned the killing's effect on her oldest son, Cameron Sterling broke into tears and wailed in grief before being comforted and led away.

She said Sterling was "held unjustly and killed without regard for the lives" of his children.