Accessibility links
Minnesota Police Shoot Philando Castile During Traffic Stop; Aftermath Is Live-Streamed On Facebook : The Two-Way The killing of Philando Castile, 32, in suburban St. Paul, Minn., is the second police shooting of an African-American man to gain national attention this week. 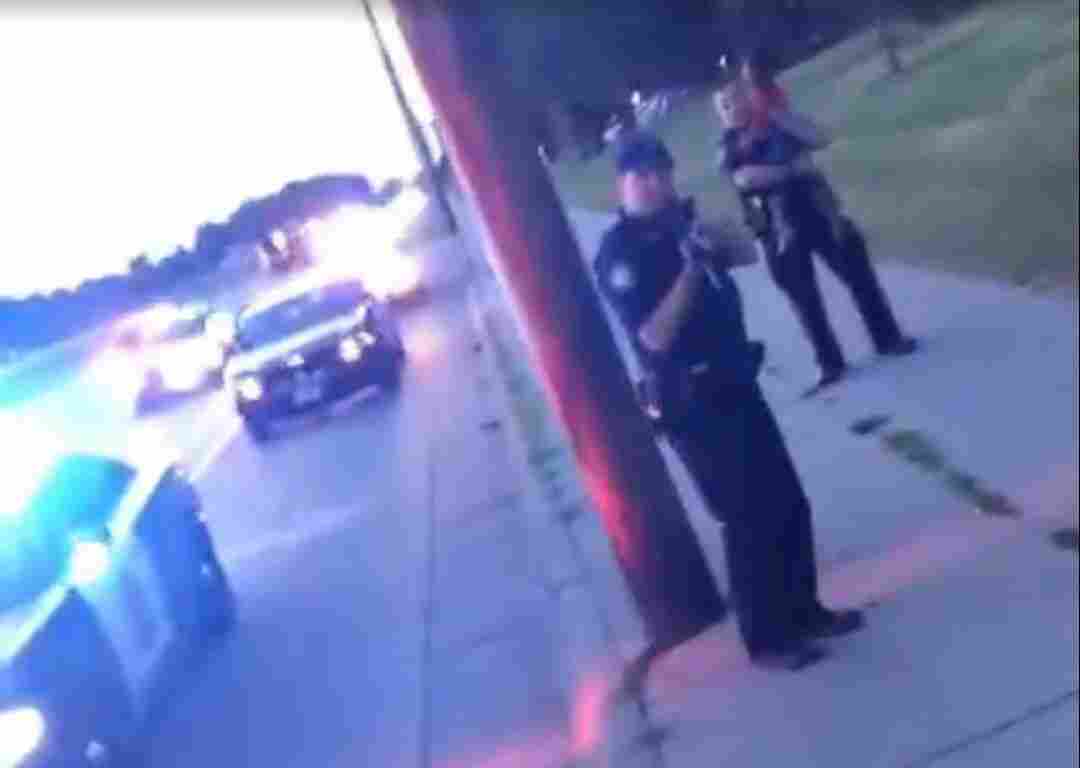 A screenshot from the live video feed that was posted by a woman whose boyfriend was shot and killed in Falcon Heights, Minn., on Wednesday. Diamond Reynolds via Facebook/Screenshot by NPR hide caption 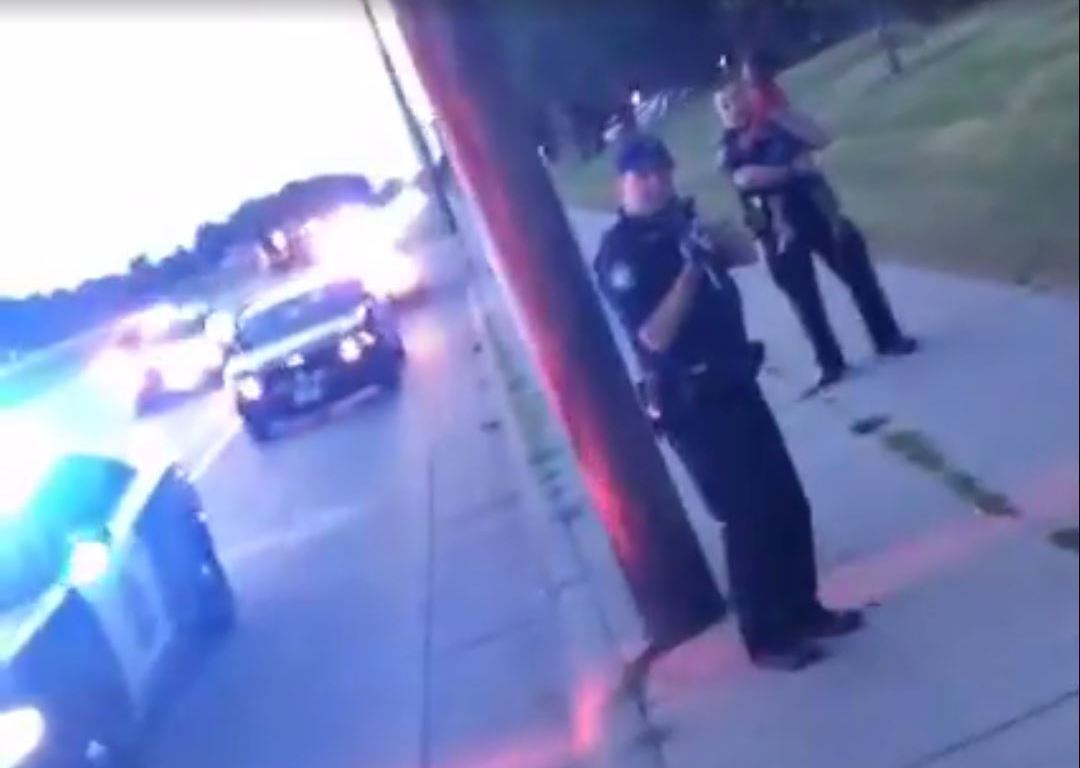 A screenshot from the live video feed that was posted by a woman whose boyfriend was shot and killed in Falcon Heights, Minn., on Wednesday.

Diamond Reynolds via Facebook/Screenshot by NPR

Philando Castile, 32, was shot Wednesday night by a police officer in suburban St. Paul, Minn., in the second fatal encounter between police and an African-American man to gain national attention this week.

Castile's girlfriend, Diamond Reynolds, began streaming video live on Facebook immediately after the officer fired. In the stream she said Castile was stopped for a broken taillight, had notified the officer that he was licensed to carry a handgun and was reaching for his wallet at the officer's request when he was shot.

The graphic video, which shows Castile suffering from a wound to his chest area, his shirt bloodied as he slumps in the car, has sparked outrage and protests in Falcon Heights, Minn., not far from where Castile worked as a cafeteria supervisor at the J.J. Hill Montessori Magnet School in the St. Paul Public School District. The school district said Thursday that its staff is grieving his "tragic death." President Obama, without commenting on the particulars of the case, said that such incidents are "symptomatic of a broader set of racial disparities that exist in our criminal justice system."

Minnesota's Bureau of Criminal Apprehension is investigating, and Gov. Mark Dayton has asked the U.S. Justice Department to examine the case.

Would this have happened if those passengers, the driver and the passengers, were white? I don't think it would have.

Late on Thursday, the BCA released the names of the two officers involved in the traffic stop, Minnesota Public Radio reported. Both officer Jeronimo Yanez, who reportedly shot Castile, and officer Joseph Kauser had been with the St. Anthony Police Department for four years and have been placed on administrative leave.

Today, Castile's mother, Valerie, said that while her son tried to live by the law, "he was killed by the law." His death has been ruled a homicide, the BCA reported.

At a press conference Thursday, Dayton called the shooting "totally unacceptable." He said he found both the shooting and the aftermath "absolutely appalling at all levels," noting in particular that no first aid was provided to Castile, while other police officers did attend to the officer who fired the shots. Dayton also criticized the "stark treatment" of Reynolds by police.

"Justice will be served," Dayton said. "Justice must be served."

At the conference, a reporter asked whether the presence of online video shaped Dayton's reaction to the shooting — noting that he had been much less outspoken about the police shooting of Jamar Clark last year. Dayton didn't answer directly, but frequently referenced the video as he denounced Castile's shooting.

Immediately after Castile was shot, his girlfriend — who uses the name Lavish Reynolds online — began streaming video to Facebook from the car in which she had been riding with Castile and her 4-year-old daughter.

We'll embed the video here, with the warning that it contains images and language that viewers might find disturbing. You can also see it on Facebook. (The video was briefly removed from the site owing to what the tech giant called a "technical glitch," TechCrunch reports, but has been reinstated.)

Speaking Thursday, Reynolds said she recorded the video because she wanted the world to see the truth and was afraid police would misrepresent the situation.

"I did it so that the world knows that these police are not here to protect and serve us," she said. "They are here to assassinate us. They are here to kill us because we are black."

"Stay with me," Reynolds says at the start of the video, as her boyfriend clutches his side.

"We got pulled over for a busted taillight in the back," Reynolds says, beginning to tell her story in a video that lasts for nearly 10 minutes. "The police just ... he's covered."

"They killed my boyfriend," she says as Castile sits in the car, occasionally crying out. "He's licensed to carry. He was trying to get out his ID and his wallet out his pocket. And he let the officer know that he was — he had a firearm, and he was reaching for his wallet. And the officer just shot him in his arm."

Reynolds is then interrupted by the shouts of a police officer who tells her to keep her hands where he can see them. As he speaks, he's pointing the gun inside the car.

"I told him not to reach for it!" the officer yells, as he seems to take deep breaths. "I told him to get his hands up."

"You told him to get his ID, sir — his driver's license," a remarkably composed Reynolds answers.

The officer then tells her to keep her hands where he can see them.

Minnesota Public Radio has this profile of victim Philando Castile:

More than a minute into the video, other police officers order Reynolds out of the car. She complies — asking about her daughter as she does so (the video shows that the girl is being held in the arms of an officer).

A police officer then orders Reynolds to get on her knees, where we hear the sound of handcuffs being placed on her. Her phone is tossed onto the ground, but continues to record. The recording then captures the sound of an officer — seemingly the one who shot Castile — periodically yelling an obscenity.

Reynolds' phone is then returned to her as she sits in the back seat of the police car with her daughter. Toward the end of the video, Reynolds becomes more emotional, screaming, "I can't believe they did this."

As Reynolds cries, her daughter tells her, "It's OK, Mommy. It's OK, I'm right here with you."

Pastor Danny Givens, who says he was "like a relative" to Castile, spoke to NPR's Ari Shapiro on Thursday about his friend.

"There were so many amazing qualities and facets about this young man that it's hard to believe this happened," Givens said. "I mean, he was just the kind of man — he had eyes that just spoke life to you. You know, when he saw you, he saw you. And you felt seen by him."

Minnesota Public Radio has more details on the traffic stop and subsequent protests:

"The traffic stop came at about 9 p.m. in the area of Larpenteur Avenue and Fry Street in Falcon Heights, near the Minnesota State Fair grounds.

"As news of the shooting spread, some 200 protesters gathered at one point near the site while authorities pursued the investigation, searching for evidence in and around the car."

By 2 a.m., MPR reports, police had removed the car from the scene. 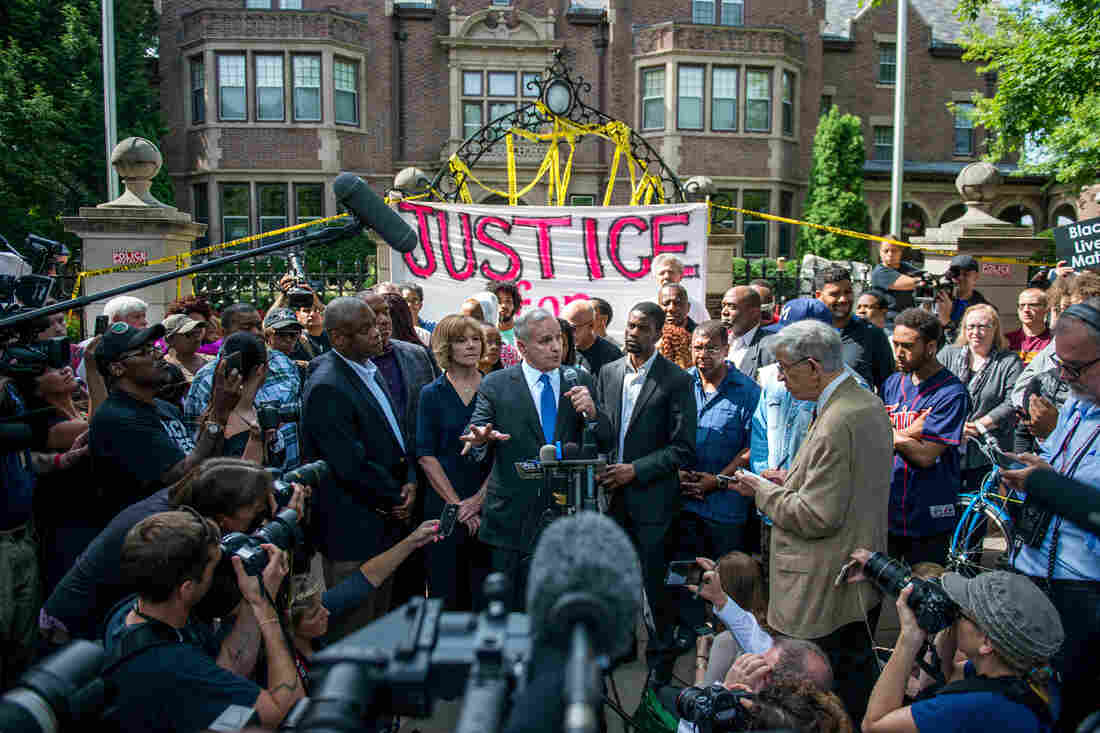 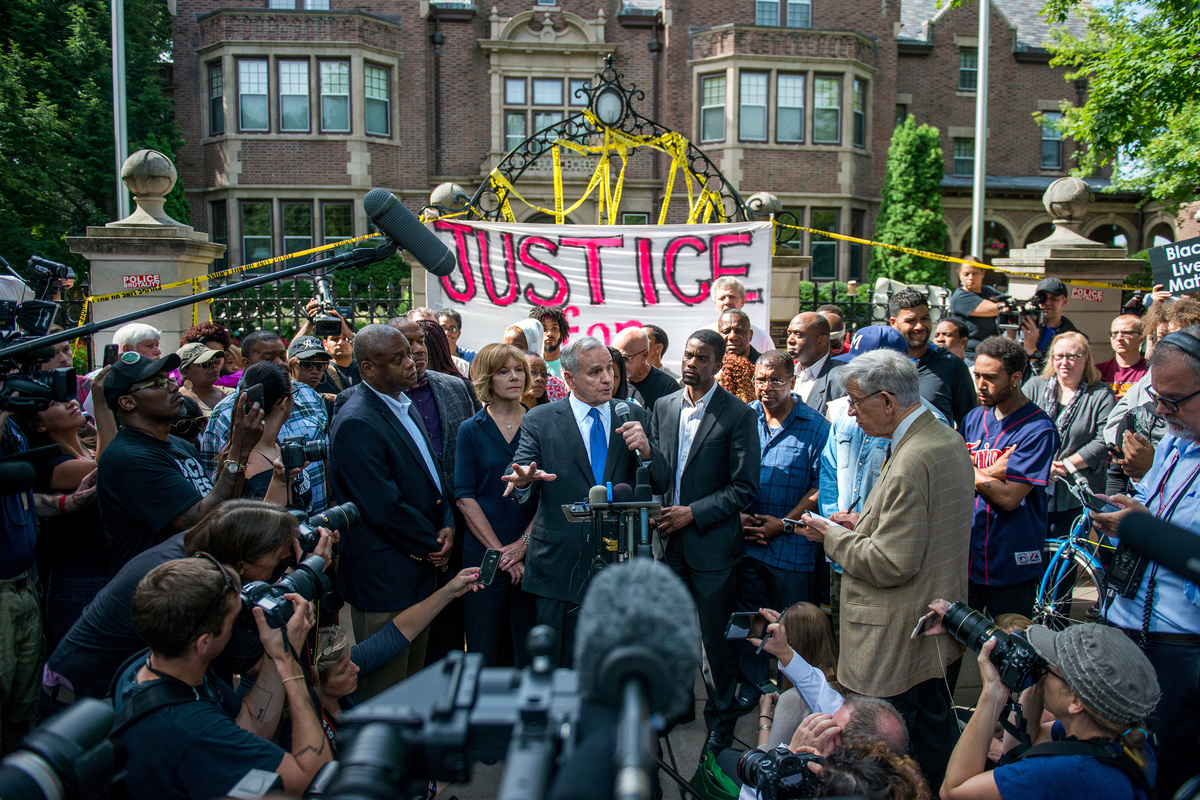 Police issued a brief statement last night, with St. Anthony Sgt. Jon Mangseth, who's the interim chief, saying Reynolds and her daughter were not injured, and that they had been "transported to another police department agency."

He added, "There is no other threat to the public at this time."

Mangseth provided few details about the stop, other than to say that the primary officer who pulled the car over and a backup officer were both from St. Anthony.

He added that Minnesota's BCA — the Bureau of Criminal Apprehension — had been called in to investigate "so we can learn what happened."

Mangseth also said, "It's not something that occurs in this area often."

The fatal police encounter in Minnesota also comes close on the heels of a police shooting in Baton Rouge, La., earlier this week. In that incident, bystanders recorded video as Alton Sterling, 37, was pinned to the ground by two officers before being shot to death.