Accessibility links
Dallas Shooting Victims: Their Names And Stories : The Two-Way Twelve law enforcement officers were shot in downtown Dallas on Thursday; five were killed. Here are the names of those whose lives were lost — and their stories. 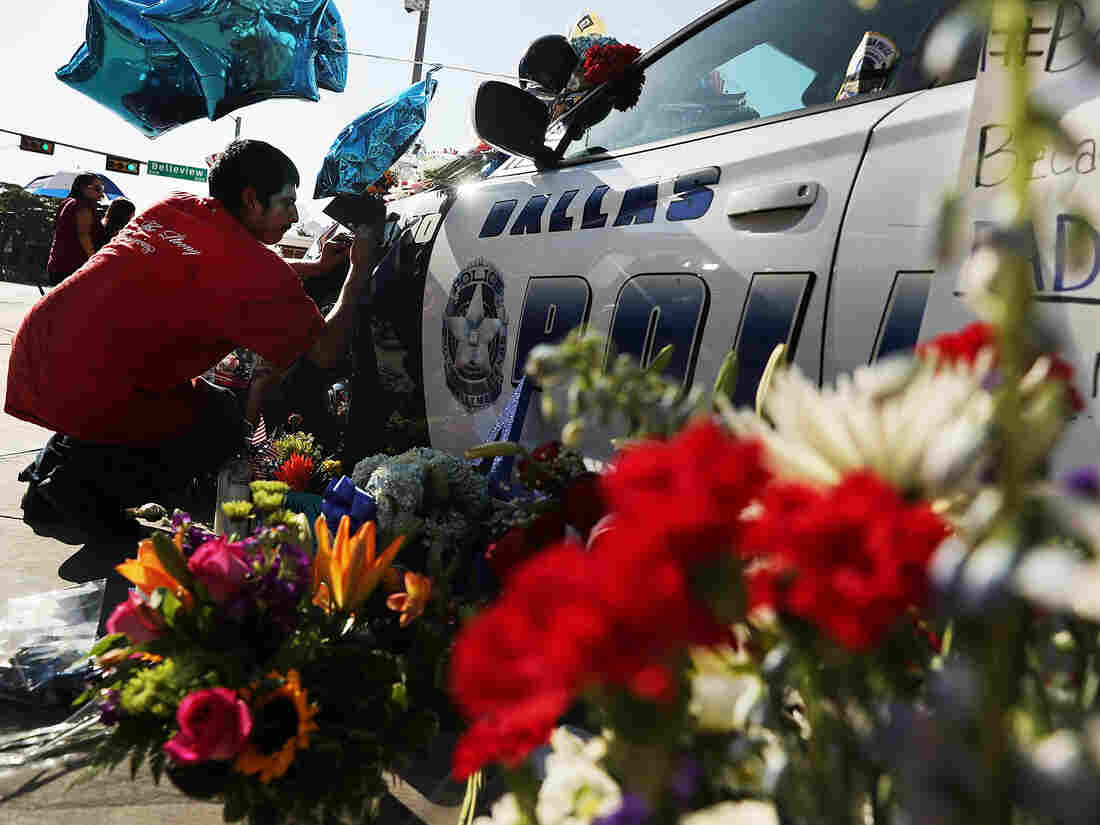 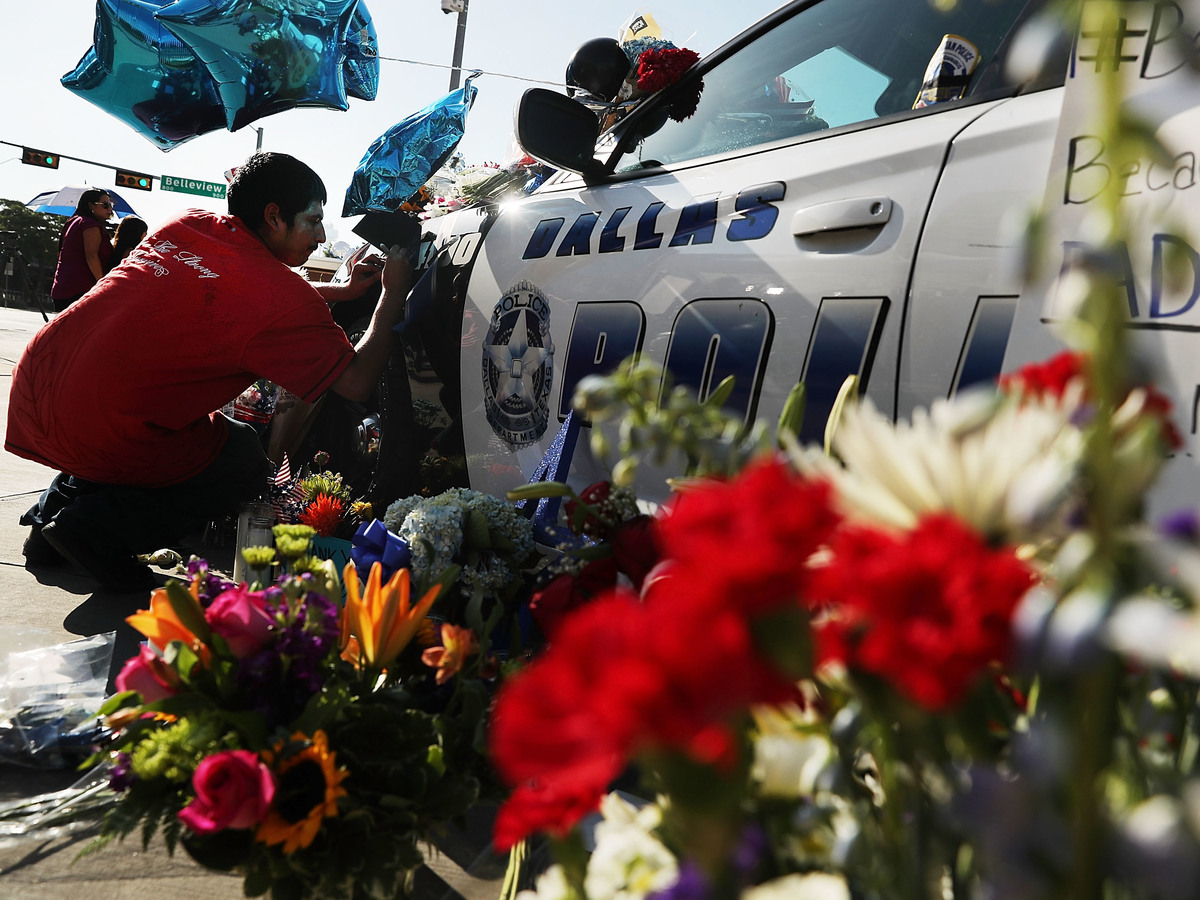 People write condolence notes to the fallen police officers at a growing memorial in front of the Dallas Police Headquarters, following the killing of five police officers.

All five of those killed Thursday night at the Dallas protest were law enforcement officers — four of whom served with the Dallas Police Department, and a fifth who worked for Dallas Area Rapid Transit, or DART. That DART officer has been identified by the department as Brent Thompson.

"Dallas officers are hurting," Dallas Police Chief David Brown said on Friday morning. "We are heartbroken. There are no words to describe the atrocity that occurred to our city. All I know is that this must stop, this divisiveness between our police and our citizens."

Here are the names of those who lost their lives in the Dallas shooting — and their stories. 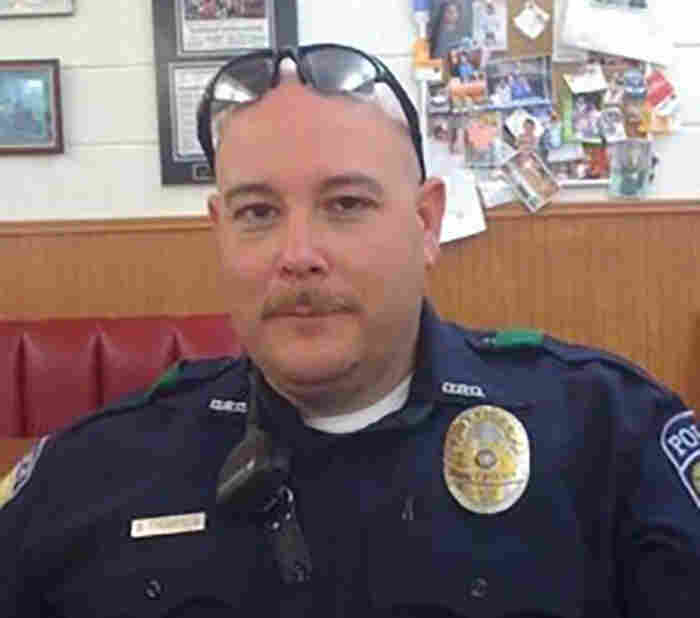 Brent Thompson, of Dallas Area Rapid Transit, was one of five police officers killed in a shooting in Dallas. LinkedIn/Handout via Reuters hide caption 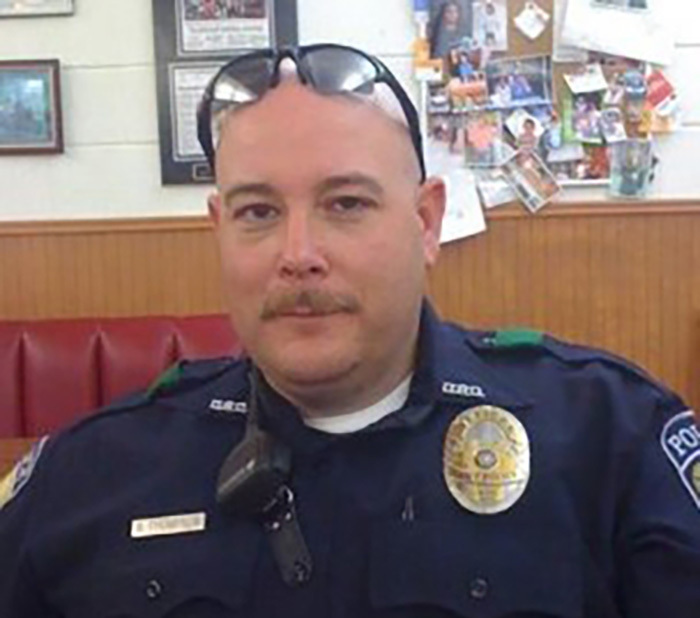 Brent Thompson, of Dallas Area Rapid Transit, was one of five police officers killed in a shooting in Dallas.

"Officer Thompson is the first officer killed in the line of duty since DART formed a police department in 1989," the agency writes in a statement. "He joined the DART Police Department in 2009."

Prior to his service with the agency, Thompson had worked with DynCorp International, supporting the operations of American police officers who were training Iraqi law enforcement in southern Iraq, according to Thompson's LinkedIn profile.

"He was in great spirits from his recent marriage," Spiller said.

"He was a dedicated officer," Thomas said, "dedicated to the safety of Americans, all over the world certainly." 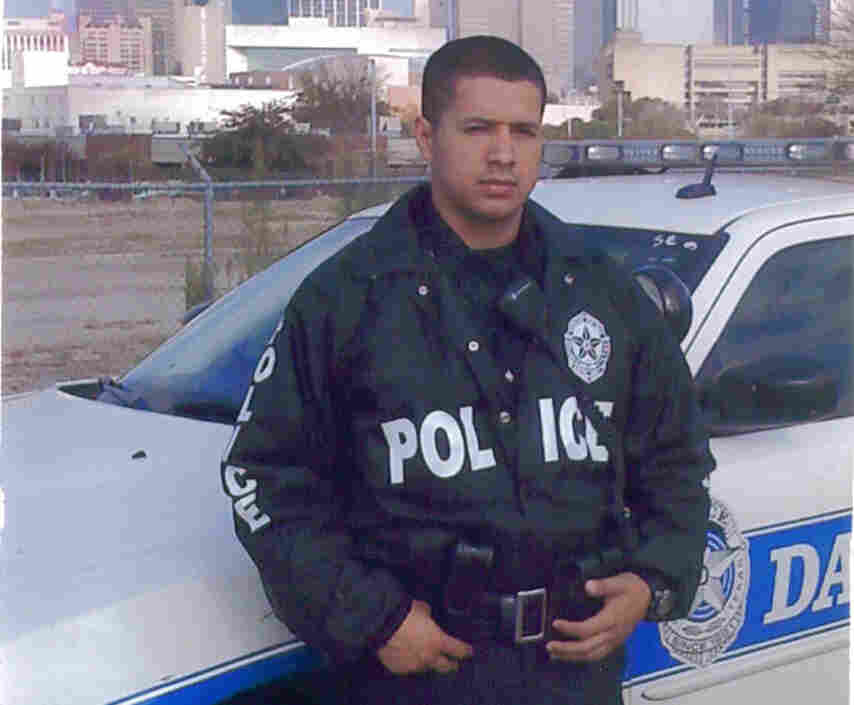 Patrick Zamarripa, of the Dallas Police Department, was one of the five officers killed in a shooting in Dallas. Hector Zamarripa/Handout via Reuters hide caption 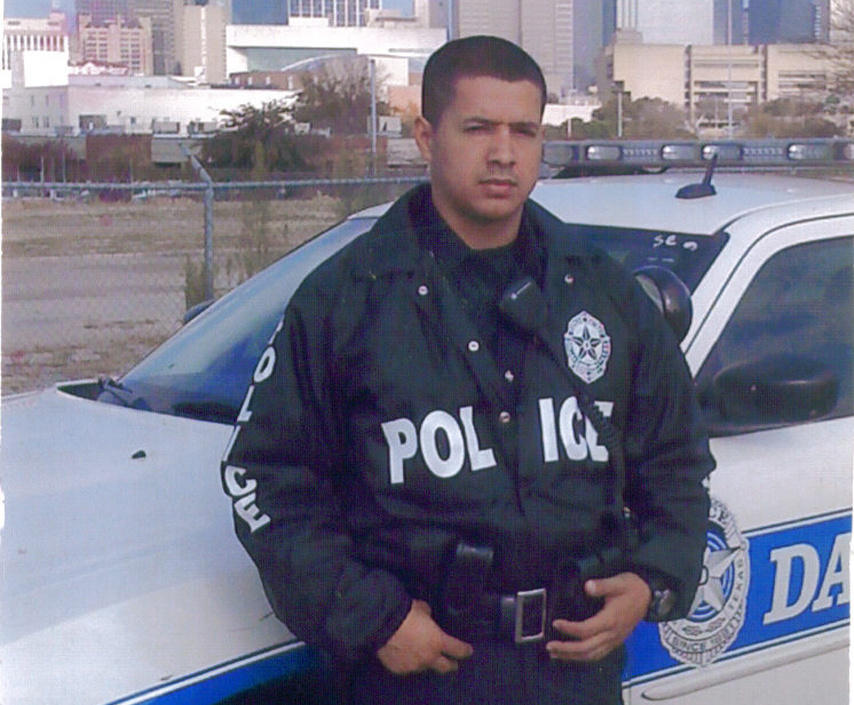 Patrick Zamarripa, of the Dallas Police Department, was one of the five officers killed in a shooting in Dallas.

Most of you already know this by now today in Dallas , my son is a police officer in Dallas he was working there the rally in downtown where my son was shot and killed by a sniper along with four other police officers maybe more at this moment I'm still at the hospital here in Parkland Hospital to see him be moved to the medical examiner's office."

Rick Zamarripa added: "need prayers to get through this."

In an interview with The Washington Post, the elder Zamarripa elaborated. When news of violence in downtown Dallas broke Thursday night, he told the paper, he sent a text to his son asking whether everything was OK. Rick Zamarripa told the Post it was unusual to be met with silence on the other end.

It wasn't until he arrived at the hospital later that night that Rick Zamarripa's fears were confirmed.

The officer he met at the hospital "wouldn't tell me," Rick told the Post. "He had that look on his face. I knew."

Zamarripa served in the U.S. Navy in both Iraq and Bahrain. The Post also reports that Zamarripa had a young daughter.

In an Instagram post shared on Friday, Texas Rangers prospect Joey Gallo shared a photo he'd taken with Zamarripa and teammate Nomar Mazara earlier this year. In the post, Gallo said the officer, who was an avid fan of the Rangers, talked sports with the pair for a bit and asked for a photo.

A couple months ago @nomazara26 and I were walking down the street in downtown Dallas. When an officer stopped us, Mazara and I immediately became nervous, "I know who you guys are" he said. "Joey Gallo and Nomar Mazara, can I get a picture with you guys please?" It was definitely a first for me and Nomar to have an officer, a true hero, want to meet us. His name is Patrick Zamarripa, one of the officers killed in last nights shootings in Dallas. I'll never forget how kind and down to Earth he was. We ended up having a 15 minute conversation about sports with him. He was an avid Rangers fan. But more importantly a great person, and family man. Please keep Patrick, and all the officers affected and their families in our prayers today. #prayfordallas

"He wanted to do more, that's kind of how he was. He wanted to make everything better," Krol's uncle Jim Ehlke told WDIV Detroit. "It was probably the most frustrating thing for him — he couldn't solve it all."

NPR confirmed Krol's death with his sister, Aime, who described him as "a gentle giant who loved his job."

She says their family is "devastated" and "in shock."

Michael Krol served with the jail system in Wayne County, Mich., before heading to Dallas to pursue a career as a police officer there, according to Detroit local media.

"We are saddened by the loss of the dedicated officers in Dallas — one of whom was a former member of this agency — and also the wounding of the other officers," Wayne County Sheriff Benny Napoleon said in a statement Friday morning. "Those officers made the ultimate sacrifice and died honoring their oaths to protect and serve. Our thoughts and prayers go out to their families and also the Dallas Police Department."

"He got into law enforcement and worked really hard to be a police officer," Ehlke told Click On Detroit. "He spent some time at the correctional facility. It wasn't quite what he was looking for, so he worked pretty hard to find a job and got one in Dallas."

It was a gamble for Krol, The Washington Post reports. His brother-in-law Brian Schoenbaechler told the paper he left his family and familiar surroundings for Dallas for a very simple reason: "He said, 'This is something that I wanted to do.'"

Senior Cpl. Lorne Ahrens served with the Dallas Police Department for 14 years — and he did so often with a grin, his fellow officer Steve Stribley told The Dallas Morning News. 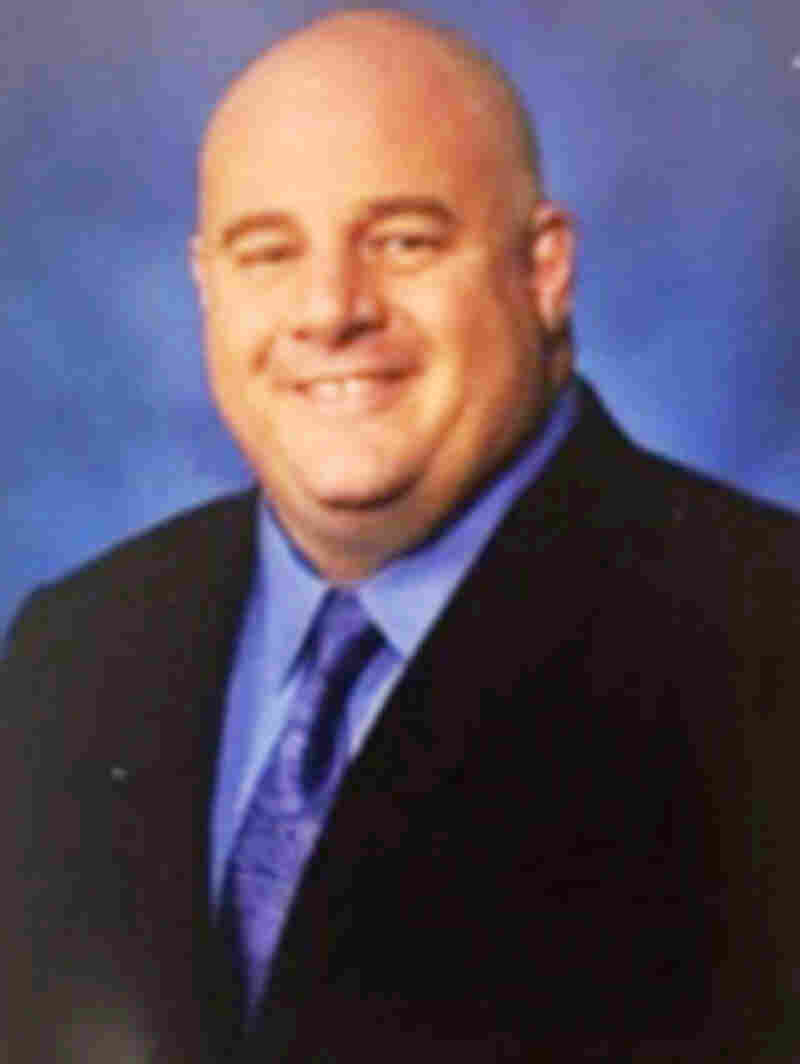 This undated photo provided by the Los Angeles County Sheriff's Department shows former Deputy Lorne Ahrens, who served the county from 1991 to 2002. At the time of his death, Ahrens was a senior corporal on the Dallas police force. AP hide caption

"He was always one of the happy ones, with a smile on his face," Stribley told the paper. He said Ahrens was "an incredibly loving and devoted husband and father. Greatly respected veteran of the department."

To his younger brothers, he was also a father figure with a strong sense of responsibility that, his half-brother Jeffrey Sonner told NPR, carried over into his policing work.

"He should be remembered doing his duty, and he was out there just protecting the citizens," Sonner said.

The married father of two — a "big ol' boy," his father-in-law told The Washington Post — wasn't afraid of getting physical on the playing field. The paper reports he played a few years of semiprofessional football in California, where he had grown up outside Los Angeles.

He moved to Texas shortly after his wedding, according to The Post.

Smith, an Army veteran, had been on the Dallas Police force for more than 25 years, KFDM reports.

The Dallas Police Association, when it recognized him with a "Cops' Cop" award in 2009, noted his can-do attitude and willingness to pay out of pocket for advanced training. It praised a racquetball program for local kids he founded at the YMCA, and wrote that he once took a blow to the head to protect his partner.

He had been married for nearly two decades, with two teenage children, the Dallas Morning News reports.