Accessibility links
More Than 200 People Arrested At #BlackLivesMatter Protests In Louisiana, Minnesota : The Two-Way Protesters gathered around the country Saturday. And while the demonstrations were largely peaceful, tensions erupted in Minnesota and Louisiana.

More Than 200 People Arrested At Protests In Louisiana And Minnesota

More Than 200 People Arrested At Protests In Louisiana And Minnesota 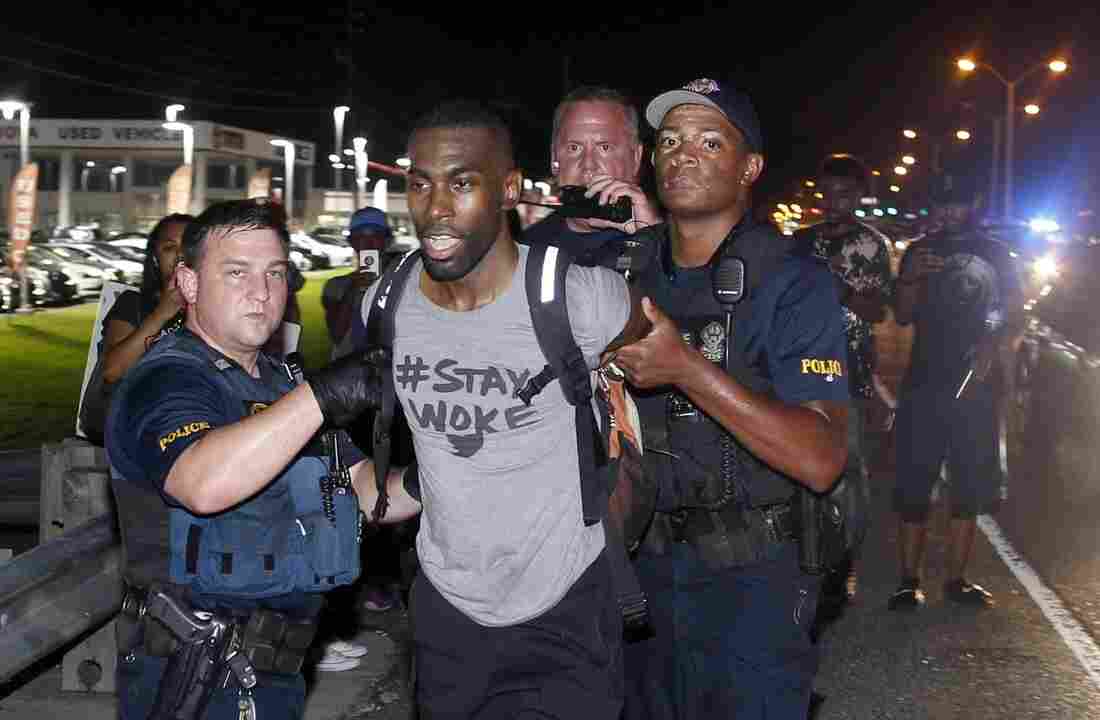 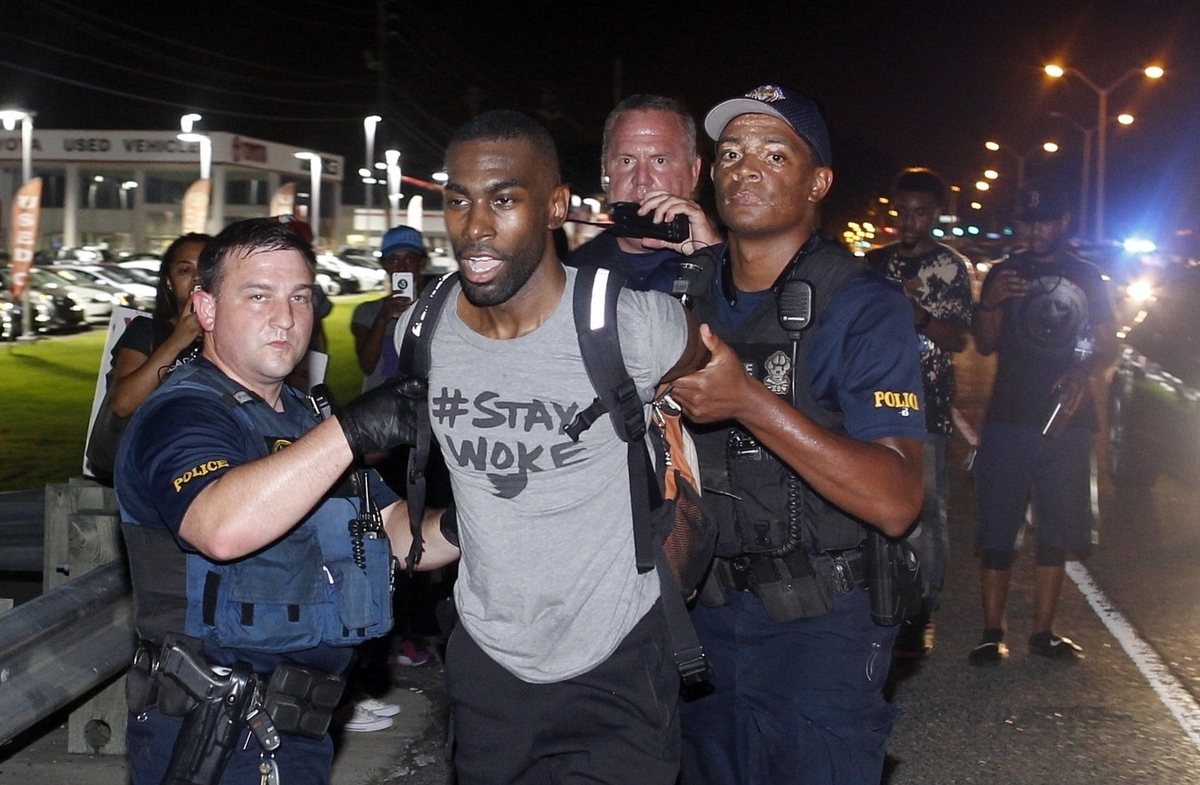 Police arrest activist DeRay McKesson during a protest along Airline Highway, a major road that passes in front of the Baton Rouge Police Department headquarters on Saturday in Baton Rouge, La.

Protesters gathered around the country Saturday. And while the demonstrations were largely peaceful, tensions erupted in Minnesota and Louisiana, where police arrested more than 200 people.

As we reported, the protesters marched from the governor's mansion in St. Paul to Interstate 94, and police fired tear gas at demonstrators after they blocked the roadway. "21 officers from multiple agencies were injured on I-94 and other areas of the city," the St. Paul Police department said on Twitter, adding that protestors were setting off fireworks and throwing bricks. As Minnesota Public Radio reported, "none suffered serious injuries."

Of the 102 people arrested, the police said 52 were arrested for "public nuisance and unlawful assembly" and 50 for "3rd degree riot." 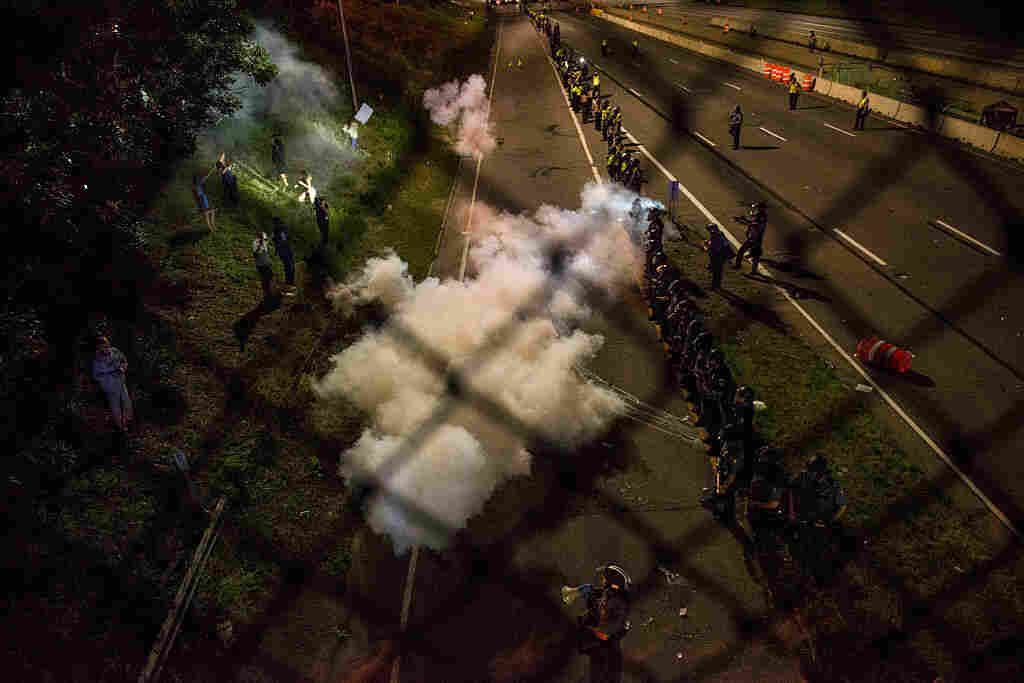 Demonstrators have gathered at the governor's mansion since Wednesday night's fatal police shooting of Philando Castile, as The Associated Press reported.

In Baton Rouge, hundreds gathered at an intersection next to Baton Rouge police headquarters to call for justice in the shooting death of Alton Sterling, as reporter Jesse Hardman told our Newscast unit.

Among those arrested is DeRay McKesson, one of the best-known activists from the Black Lives Matter movement. He was live-streaming the protest over Periscope at the time. As he and other protesters walk alongside Airline Highway, a policeman can be heard warning McKesson, "if you get any closer [to the road] you're going to jail," as we reported.

Mckesson appears to heed the officer's warning, but moments later a policeman suddenly comes up behind him and tells him he is under arrest. The camera shakes and Mckesson can be heard saying, "I'm under arrest, y'all." According to police records obtained by The Advocate, Mckesson was charged with "simple obstruction of a highway of commerce."

According to The Washington Post, Mckesson was released from custody on Sunday afternoon.

WWNO reporter Ryan Kailath was also taken into police custody, the New Orleans-based member station tells NPR. The station said he was booked on one count of obstruction of the highway.

As Hardman reports, "A spokesman for the state police said officers were only targeting protesters who were obstructing the road."

In San Francisco, protesters rallied for hours on Saturday and "at different times closed three ramps leading to and from the Bay Bridge," as SFGate reported. Demonstrations were also reported in many other cities, including New York, Philadelphia, Denver and San Antonio.

You can find our full coverage of the demonstrations around the country over the past few days here.