Accessibility links
Larry The Cat Stays Put Amid Upheaval Of British Politics : The Two-Way David Cameron is moving out of 10 Downing St. But as the prime minister changes, the prime mouser is holding firm. Meet Larry, the U.K.'s fearless, allegedly feckless feline in chief.

Larry The Cat Stays Put Amid Upheaval Of British Politics

Larry The Cat Stays Put Amid Upheaval Of British Politics 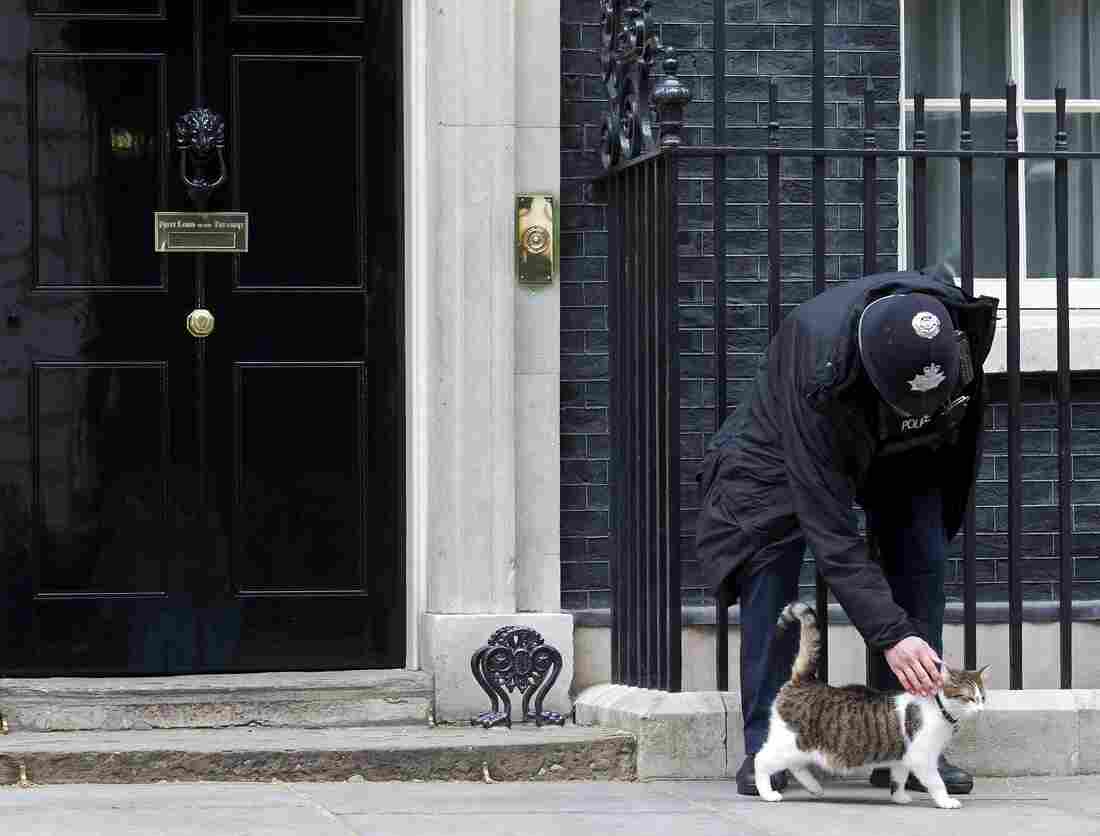 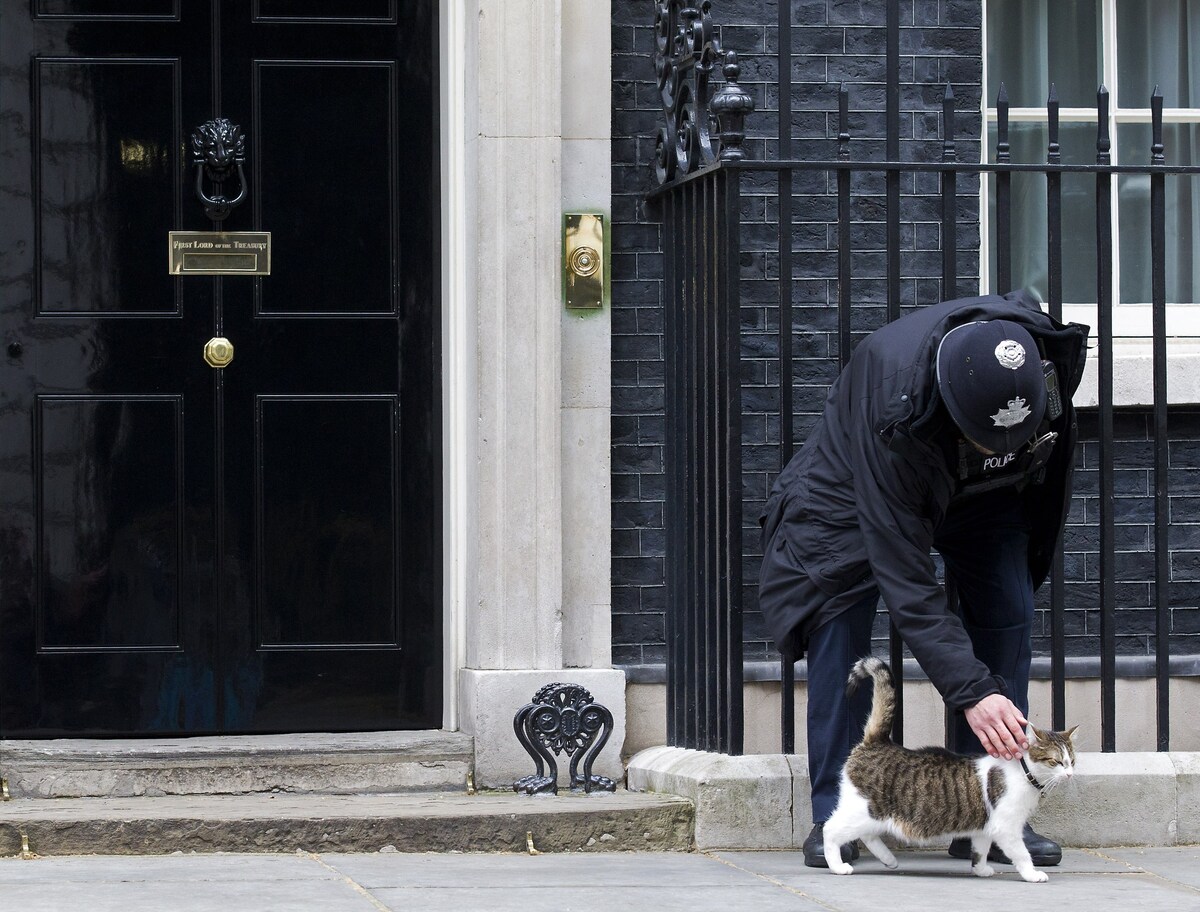 A police officer strokes Larry, the cat who patrols 10 Downing St. in London. Although David Cameron has resigned as prime minister, Larry will retain his position as prime mouser.

The United Kingdom got a new prime minister Wednesday, as David Cameron resigned and Theresa May stepped in.

But the nation's prime mouser remains the same: Larry the cat, beloved by the British for his charm ... and sloth.

In early 2011, the prime minister's residence had a mouse problem. Larry was at an animal rescue center that enthusiastically endorsed his mousing skills. It seemed like a match made in heaven.

There's a long tradition of official cats in the British government — the U.K.'s National Archives has a thoroughly delightful exploration of some of the most notable.

The former stray arrived at Downing Street on Feb. 15, 2011 — and promptly scratched a TV reporter and got busted trying to photobomb Kevin Spacey. But hey, he wasn't there for the convenience of the press. He was there to catch rodents!

The only problem: He wasn't good at killing mice. At all.

Less than two weeks after the start of his tenure, his name was being trashed in the British press. Here's The Daily Telegraph, from Feb 28, 2011:

"One source told a Sunday newspaper that Larry had done little but sleep since his arrival from Battersea Cats and Dogs home 10 days ago, stirring occasionally to scratch passing officials. Larry had even left hair on the Prime Minister's suits, the anonymous briefer complained.

" 'He has shown no interest in the many mice in Downing Street,' a source told the Independent on Sunday. 'There is a distinct lack of killer instinct.'

"A senior Downing Street spokesman leapt to defend the cat from the anonymous slurs, pointing out that it was far too soon to expect the rat catcher in chief to have fulfilled his brief."

In June, Cameron insisted Larry was doing his job and had finally made some kills.

But the media were skeptical, and slurs on Larry's efficacy continued to dog him. That September, an anonymous photographer told the Daily Mail he or she had personally witnessed Larry failing to catch a mouse. 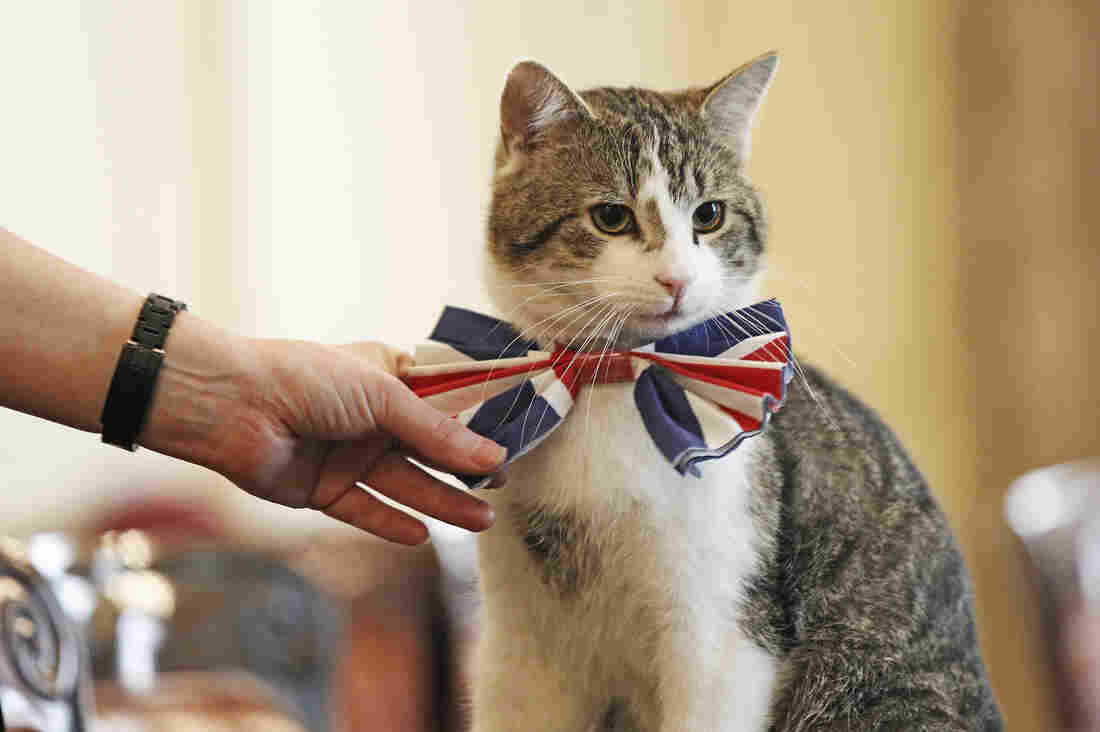 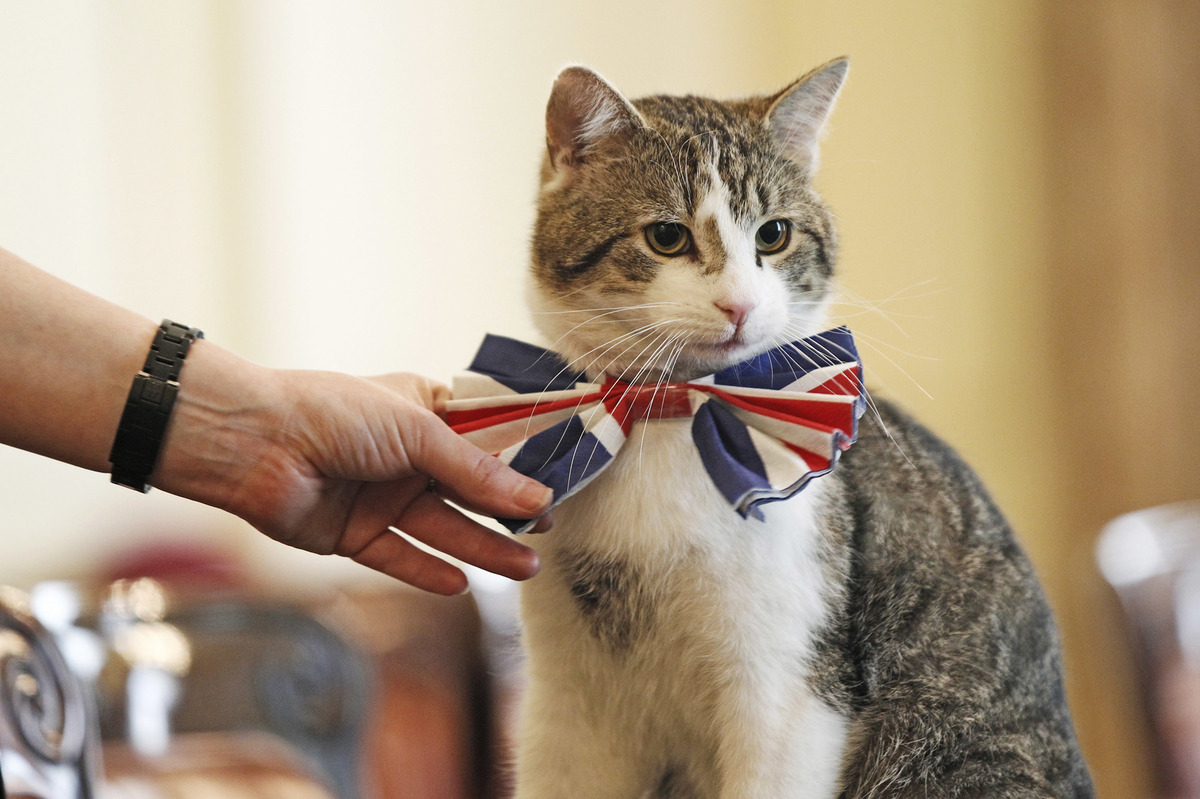 Larry gets into the royal wedding spirit with a Union flag bow tie, April 28, 2011.

It wasn't until more than a year later, in August 2012, that the British press accepted that Larry had scored some hunting success.

A witness spotted Larry "sitting proudly outside No 10 ... with a dead mouse," and a Downing Street spokeswoman said, "I can confirm that the cat did kill a mouse this morning."

But it didn't change his reputation as a bit of a feckless feline. Rumors soon swirled that Larry was getting sacked. Here's the Sunday People from the fall of 2012, on "Lazy Larry" and his flaws:

"The final straw came on Thursday when Mr Cameron caught Larry cat-napping on his chair in his No.10 study as another mouse scurried across the room.

"When he tried to wake Larry to do his duty one eye opened but the moggy wouldn't budge. That's when the fur really started to fly. ...

"A No.10 insider said: 'Larry has actually caught mice but he likes to spend a lot of time relaxing.' "

Chancellor George Osborne's cat, Freya, was suggested as Larry's possible replacement. She was fierce — she had lived on the street for several years, after running away from Osborne's family. And she was moving in right next door, at No. 11.

To add insult to injury, Freya and Larry got in a fight in October, and Freya won. The Guardian reports: "Freya, famed for her feral nature, lashed out at Larry, and a lone photographer caught the gruesome moment when the prime minister's feline representative was sent packing by the chancellor's cat."

But Freya didn't take Larry's spot after all. He stayed at the prime minister's residence, having various cat adventures. 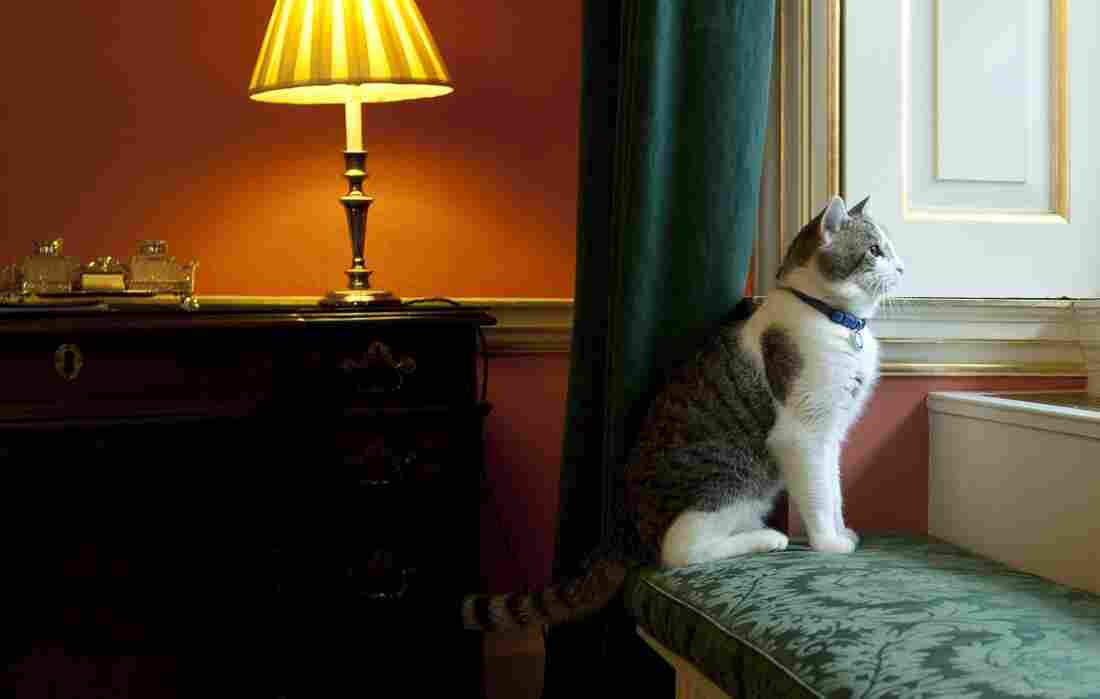 Larry gazes through a window of 10 Downing St. in London. It was hoped that the prime minister's cat would solve the rodent problem that plagued the Cameron administration. Mark Large/WPA Pool/Getty Images hide caption 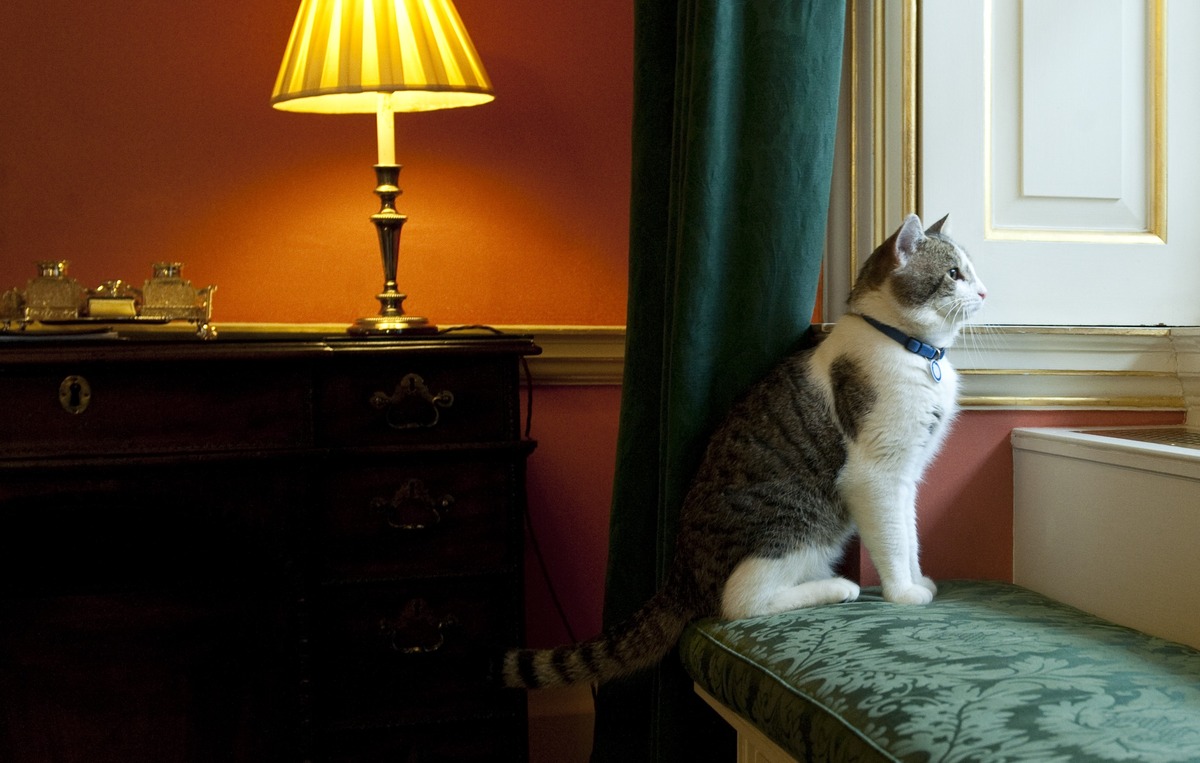 Larry gazes through a window of 10 Downing St. in London. It was hoped that the prime minister's cat would solve the rodent problem that plagued the Cameron administration.

He fearlessly faced down a police dog (who, admittedly, wasn't very intimidating). He thrilled a retired knitter by sitting on a blanket she made for him.

He got boosted security after a high-profile pet-poisoning scandal. (Although Cameron didn't help Larry's reputation for laziness when he said, to assure the public Larry wouldn't be poisoned, "he doesn't get up and get out much so I think he's probably pretty safe sitting on the chair in the hallway watching the world go by.")

Larry survived rumors that the Camerons didn't actually like him and he was just a PR prop. (Actual BBC headline: "Larry the Downing Street cat not unloved, says No 10." Actual Twitter campaign: #SaveLarry)

He greeted countless visitors to the prime minister's residence. (He's rumored to get along great with Obama). He stuck around when Freya was sent away. He welcomed a new fellow feline to Downing Street — Palmerston, the official mouser of the Foreign Office.

"Larry" has also written a book and launched a Twitter feed. (Neither appears to be in any way authorized by the humans at 10 Downing St.)

But mostly, what Larry does is be adored by the public, and bemusedly observed by the British press.

"The nation sends him gifts and treats daily," reports his official biography on uk.gov. It goes on to make it clear that Larry never improved as a mouser:

"Larry spends his days greeting guests to the house, inspecting security defences and testing antique furniture for napping quality. His day-to-day responsibilities also include contemplating a solution to the mouse occupancy of the house. Larry says this is still 'in tactical planning stage'."

News that Larry would be remaining at the prime minister's residence when Cameron moved out was widely reported — and, from some quarters, criticized as evidence of callousness on Cameron's part. The now-former prime minister had to, once again, rebut claims that he and the cat didn't really get along.

He tweeted a photo of them together, with just a single word: "Proof."

For his entire career, Larry has been frequently documented by the journalists camped out at Downing Street. But he does seem to have become a particular object of obsession over the past few weeks.

Partly it's just that he's a cat, and this is the Internet. But — at the risk of playing armchair psychologist — those of us here at the Two-Way think there's something a little more going on.

Why Is Britain Getting A Prime Minister Who Would Like To Stay In The EU?

It's been absolute political turmoil in the U.K. over the past few weeks, with the nation deciding to leave the EU, the prime minister stepping down, the replacement being selected months earlier than planned, the lead architects of the Brexit turning down the possibility of prominent posts — and then, in the case of Boris Johnson, being appointed foreign secretary anyway — and the opposition Labour party engaged in open revolt against its leader.

Larry — the indolent, the unmovable, the irrepressibly charming — just might be the most dependable political figure in the U.K. today.

"British politics has not been this chaotic in decades," says NPR's Frank Langfitt, our London correspondent. "And so Larry is a symbol of stability: a cat that is not leaving 10 Downing St."

Oh god. It's happened. The cats have taken over while we were all too busy to notice. pic.twitter.com/x9sbLHhFnY