Accessibility links
Nice, France, Bastille Day Attack: Truck Drives Through Crowd, Killing Scores Of People : The Two-Way More than 200 people were injured on Thursday when a truck drove for more than a mile through a crowd of seaside celebrators in Nice, France. The attacker was shot and killed by police.

At a beachside restaurant in Nice, France, Eric Drattell and his wife were relaxing after a fireworks show when a white truck began speeding down the seaside promenade, mowing people down.

"You go from having an absolutely marvelous time to sheer terror in a blink of an eye, literally," he says. "It was a spectacular fireworks show. And then all of a sudden this happens and people are screaming."

Some people jumped off the promenade, falling several yards to the beach below in search of safety, he says. "My wife's comment to me later ... she said it was like a zombie attack. People were literally diving for their lives," Drattell says. "There were bodies and blood everywhere."

At least 84 people are dead, including two Americans and 10 children, after the Bastille Day attack, which didn't end until the driver was shot and killed by police. At least 200 more victims are hurt, dozens of them with life-threatening injuries, authorities say.

French President Francois Hollande said Thursday night that it "can't be denied" the attack was an act of terrorism.

"We are dealing with a struggle which will take a long time, because we have an enemy who is going to continue to strike all the peoples, all the countries, who have freedom as a fundamental value," he said Friday, in a CNN translation.

French anti-terrorism prosecutor Francois Molins said Friday that the investigation has been handed over to the judicial police security services.

Molins said Friday that the attack was perpetrated by Mohamed Lahouaiej Bouhlel, based on fingerprints and identifying papers. He was a Tunisia-born father of three who worked as a delivery driver. He had a criminal record in France, including a suspended six-month sentence for assault, but no record with the intelligence services; he had never shown any indication of radicalization, Molins says.

The prosecutor says Bouhlel, 31, rented the truck on Thursday, arriving at it on a bicycle (a bike was found in the back of the truck). He made his way to the Promenade des Anglais, where thousands of people were gathered and streets were blocked off for pedestrians only.

There were no heavy or concrete barriers barring access to the road, NPR's Dina Temple-Raston reports.

The truck accelerated as it approached the people gathered on the seaside walkway, then drove straight into the crowd.

The driver continued forward for 2 kilometers — more than a mile — striking scores of people with his 19-ton truck, Molins says.

The BBC, citing eyewitnesses, reports that the driver "swerved and zigzagged" as he went, apparently to increase the number of casualties.

A government official initially said that police found guns and explosives in the back of the truck. Molins said Friday that the attacker was armed with a single handgun, but the truck also contained a grenade and two replica assault rifles, in the styles of a Kalashnikov and an M16.

Molins says police have detained Bouhlel's ex-wife, and searches have been carried out at two locations, where documents and IT equipment have been seized.

NPR's Eleanor Beardsley, reporting from Nice, says the city has been stunned by the attack.

"Nice is a small, calm, lovely little city," she says. "People saw [terrorist attacks] in Paris twice, but they never thought it would happen here."

She describes a jarring scene in Nice on Friday morning — a clear sunny day, with palm trees and the blue Mediterranean Sea visible behind investigators in hazmat suits picking through debris, including baby carriages.

More than 10 children were among the dead, The Associated Press reports, citing the regional president in Nice. The children's hospital in Nice says it has treated dozens of children and teenagers injured in the attack, the AP adds.

Speaking in Nice on Friday, President Hollande said that approximately 50 of the injured are "between life and death."

Australian journalist David Coady, in Nice on vacation, witnessed the attack. The first thing he saw was a large white truck on the Promenade des Anglais.

"I remember thinking, 'That's really odd,' because this is an area that's been closed off to road traffic, just pedestrians were using it," Coady tells NPR. "But in that moment as I was considering it, that's when the panic really took hold."

"People were falling over," he says. "They were getting more panicked every time we heard a bang, and we didn't know what it was at the time, but we know now it was gunshots." 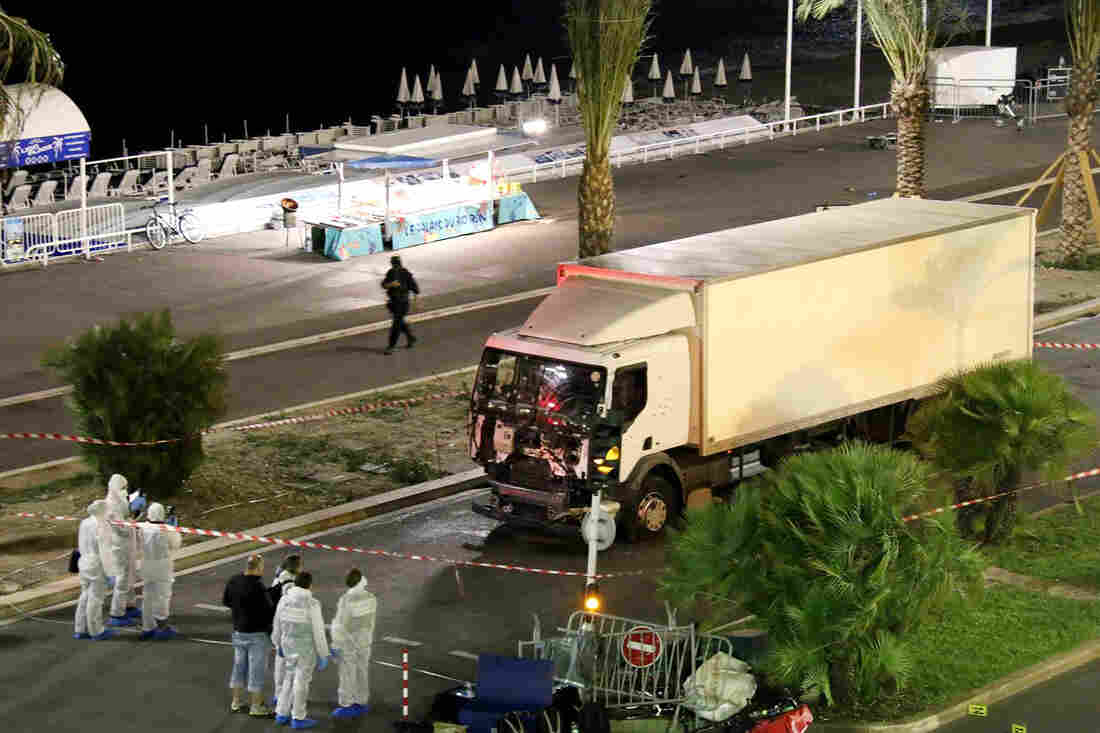 Authorities investigate a truck after it plowed through Bastille Day revelers in the French resort city of Nice on Thursday evening. Sasha Goldsmith/AP hide caption 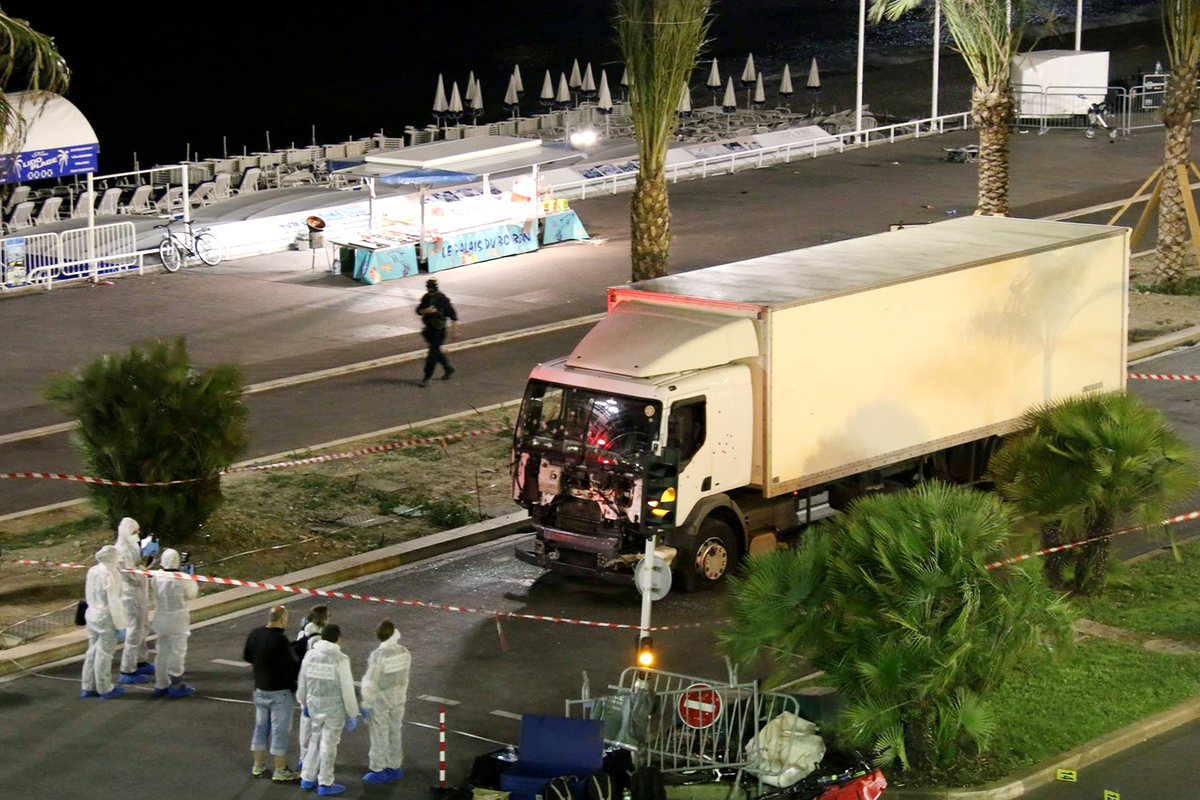 Authorities investigate a truck after it plowed through Bastille Day revelers in the French resort city of Nice on Thursday evening.

In the aftermath of the attack, Hollande announced he will extend France's state of emergency — declared after last November's attack in Paris and due to expire before the end of the month — for three more months. The French anti-terrorism prosecutor has opened a terrorism investigation.

Hollande also said he would activate those who had once served in the military and the gendarmerie to help relieve police and active-duty soldiers.

France will begin a three-day period of mourning on Saturday.

How Did France Become A Leading Target For Extremists?

President Obama has called Hollande, and has ordered flags at the White house and federal buildings be lowered to half-staff in honor of the victims.

Some details of the attack are still unclear, including the motivation of the driver.

Police are also still investigating whether the driver had any accomplices in the attack, or if he acted alone.

No group has yet claimed responsibility for the attack.