Accessibility links
LISTEN: Eyewitness Accounts Of Bastille Day Attack In Nice, France : The Two-Way David Coady was confused, at first, to see the truck in the closed-off street. Then: "People were literally diving for their lives," Eric Drattell says. "There were bodies and blood everywhere." 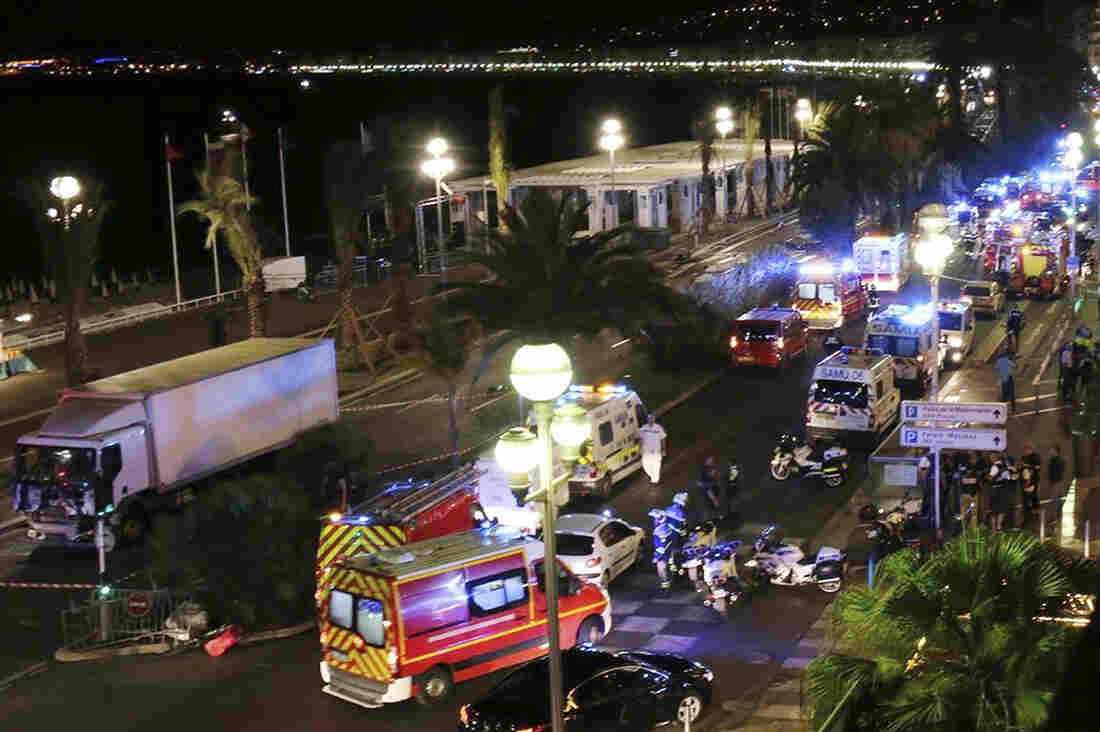 Emergency vehicles arrive after a truck plowed through Bastille Day revelers in the French resort city of Nice on Thursday. Sasha Goldsmith via AP hide caption 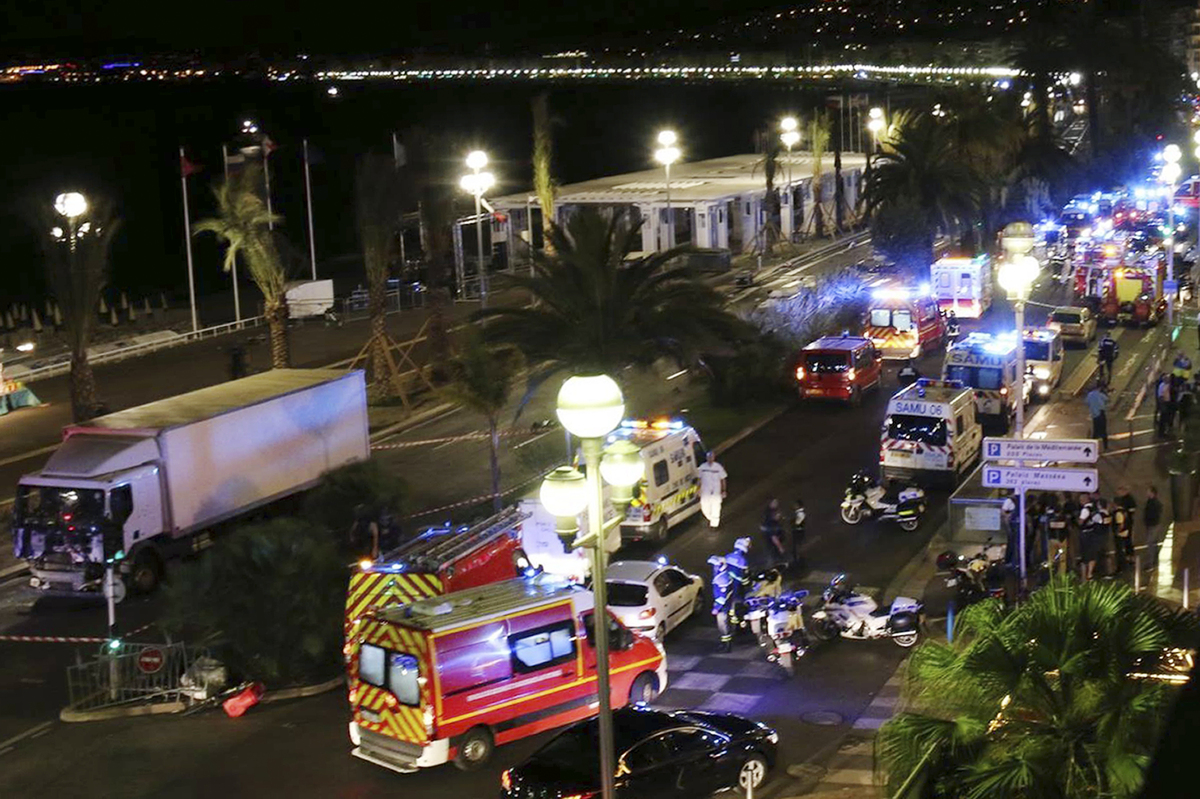 Emergency vehicles arrive after a truck plowed through Bastille Day revelers in the French resort city of Nice on Thursday.

On Thursday night, in Nice, France, thousands of people were gathered on a seaside promenade to watch the Bastille Day fireworks.

'Diving For Their Lives': Terror Along French Riviera Kills At Least 84

Then a man in a truck accelerated into the crowd, and kept going. His attack killed more than 80 people, and didn't end until police shot him dead.

Imad Dafaaoui, a Moroccan university student, was horrifyingly close to the truck. He told Morning Edition he saw a crowd of people running toward him, with a white truck behind them, and he too turned to flee.

But he made a nearly fatal error: He ran in the wrong direction.

"The mistake I did is that I ran towards the beach," he said. "I had to run back, in the wrong direction."

"I kept running until there was a bench blocking my way. The truck was too close so I realized I had to jump ... after I jumped over the bench I found out that the truck completely smashed the bench next to me."

He ran down side streets to a friend's house, then finally found the friend he had become separated from in the chaos. They walked back to try to help some victims, and saw a horrifying scene — a street filled with bodies, "so [much] gore," he said.

"It makes me think that I'm not safe anywhere," Dafaaoui said.

Imad Dafaaoui: 'I realized I had to run'

David Coady saw the attack from farther away. He's an Australian journalist who lives in London and was on vacation in Nice. He told Morning Edition that when the attack began, he was confused at first.

"I remember seeing this large white truck ... and I remember thinking, 'That's really odd,' because this is an area that's been closed off to road traffic, just pedestrians were using it," he said.

At that moment, the crowd erupted into chaos.

To escape, some of the fleeing crowd leaped down from the promenade to the beach several yards below.

That's where Eric Drattell and his wife were sitting at a beachside restaurant. The couple, Americans who live in London, were also vacationing in Nice, enjoying a nice night of fireworks and a meal.

"You go from having an absolutely marvelous time to sheer terror in a blink of an eye, literally," he told All Things Considered.

Drattell's wife was injured by someone diving off the promenade. The couple took cover in a restroom. When they left, hours later, they saw a stroller that had been crushed, and dead bodies lying in the street.

"It was unbelievable carnage," he said.

Darryl Curtis, a recent high school graduate from Baltimore, was traveling with a cousin working on Rihanna's concert tour. He, too, was by the beach in Nice when the attack occurred. The night of the attack, still shaken up and dazed, he described what he witnessed to NPR's All Things Considered.

"I heard gunshots, and people were just falling, and then people were just running away," he said. "Chaos was just happening. ... I was thinking, 'I can't lose my life in a different country.' I wasn't here in Europe to die."