Accessibility links
Turkey Says More Than 6,000 People Have Been Detained After Failed Coup : The Two-Way Turkey's justice minister also called on the United States to stop protecting a cleric living in Pennsylvania who has been accused by the Turkish government of orchestrating the coup.

Turkey Says More Than 6,000 People Have Been Detained After Failed Coup

Turkey Says More Than 6,000 People Have Been Detained After Failed Coup 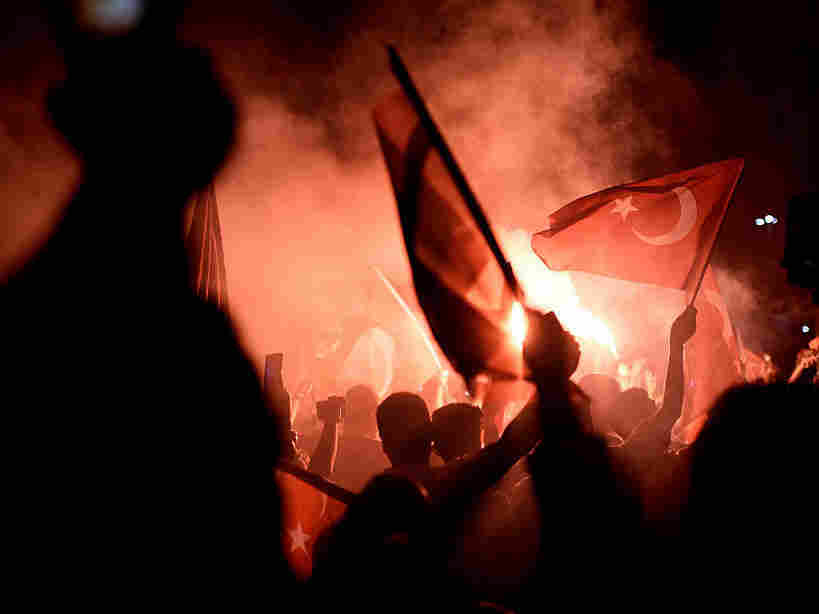 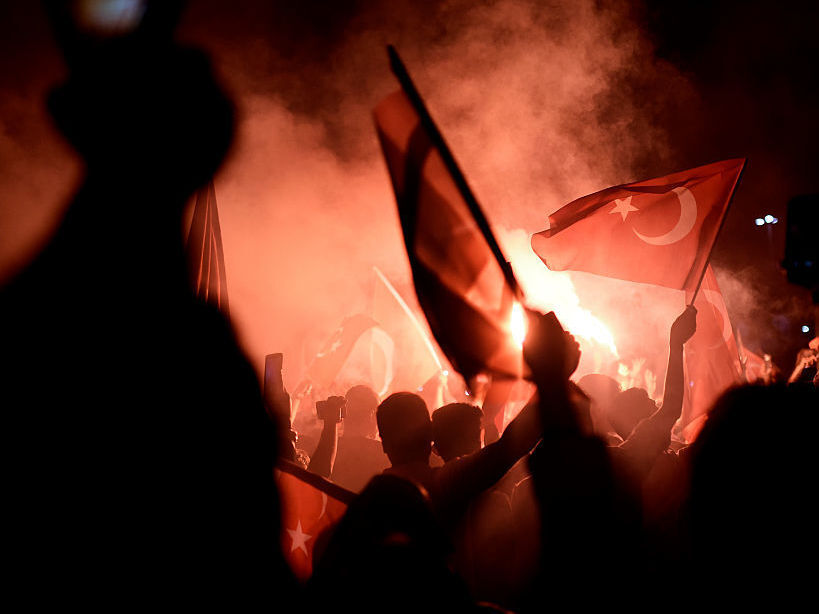 Pro-Erdogan supporters gather at Taksim square in Istanbul to support the government on July 16 following a failed coup attempt.

Turkey's justice minister says that some 6,000 people have been detained following a failed coup attempt.

That includes some 3,000 military personnel detained in bases around the country, as NPR's Leila Fadel tells Weekend Edition Sunday.

There have been varying official counts of the number of deaths. Turkey's foreign ministry stated over the weekend that the incident killed at least 290 people — more than 100 people involved in the attempted coup and 190 other citizens — and wounded at least 1,400 people. But on Monday, Turkish Prime Minister Binali Yildirim put the death toll at about 230 people.

The crackdown comes after Friday's failed coup, and Turkey's president, Recep Tayyip Erdogan, spoke about a purge while addressing a crowd in Istanbul. "He's saying that this attempt actually was a gift from God, because it gives him an opportunity to clean out the armed forces," Leila reports.

But his critics fear that the failed coup will simply provide a pretext for a crackdown on his opponents, as Leila reports.

Justice Minister Bekir Bozdag says the "cleansing" will continue, and that he expects more people to be detained, Leila adds.

Bozdag also called on the United States to stop protecting Turkish cleric Fethullah Gulen, who lives in Pennslyvania and has been accused by Turkey's government of orchestrating the attempted coup.

"The United States will not protect a person who attempted such an event against Turkey," he said.

Gulen has denied any involvement in the coup and criticized military intervention. He was previously an ally of Erdogan before their relationship soured.

In a profile of Gulen, NPR's Greg Myre wrote: 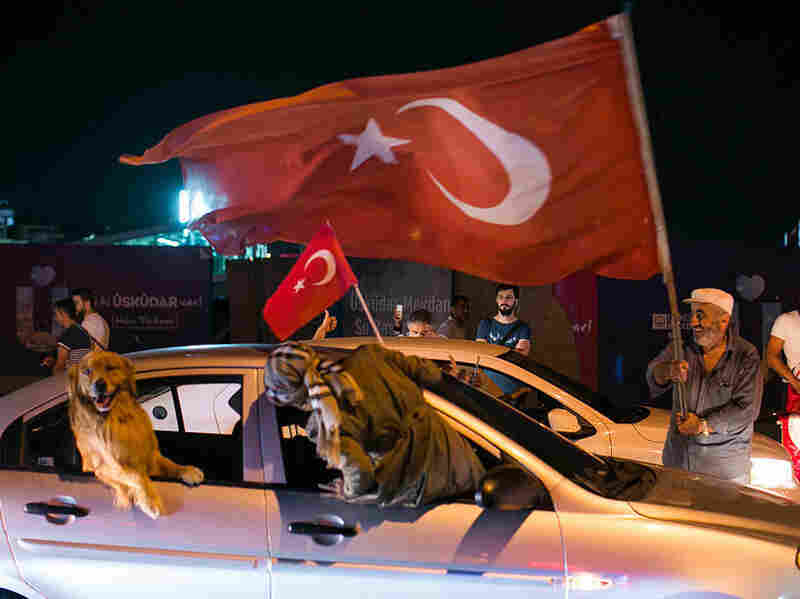 People drive next to a Turkish man waving a flag in Uskudar district in Istanbul on July 16 during a demonstration in support of Turkey's president. Gurcan Ozturk/AFP/Getty Images hide caption 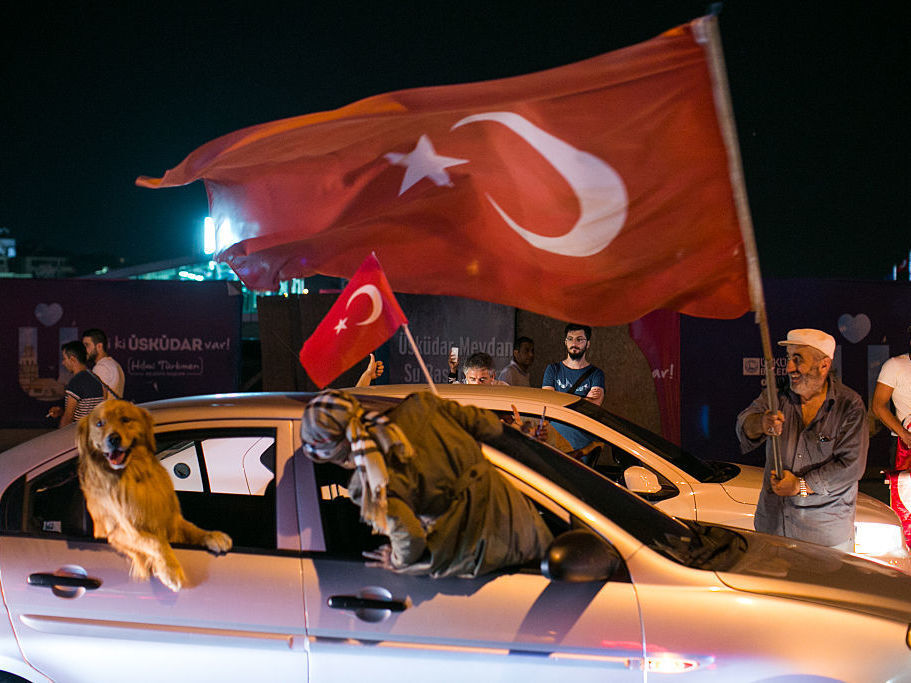 People drive next to a Turkish man waving a flag in Uskudar district in Istanbul on July 16 during a demonstration in support of Turkey's president.

Erdogan and Gulen used to be buddies. Both were considered moderate Islamists. Gulen encouraged his many followers to support Erdogan, who in turn helped raise the profile of Gulen, who runs a vast network of Islamic schools worldwide, including more than 100 charter schools in the United States.

Both men benefited from the relationship. But they had a falling out in 2013 over a corruption investigation that targeted Erdogan and some of his closest allies. Erdogan apparently believed Gulen's allies in the judiciary were responsible for the inquiry, and responded by dismissing many in the judicial system considered close to Gulen, a powerful political force in his own right.

In a statement by the U.S. State Department on Saturday, Sec. John Kerry urged the Turkish government to abide by due process and its international obligations as it investigates the attempted coup. He also warned against claiming the United States played any role in the events, and that continued claims were false and would be "harmful to our bilateral relations."

Meanwhile, Turkish citizens took to the streets Saturday evening in support of Erodgan's government. Erdogan encouraged them to continue demonstrating in favor of the government, saying that now is not the time to relax their grip, as Leila reports.

Leila says that while residents were festive and happy that their democracy was safeguarded, there is also a sense of dread and fear over what comes next:

"It's a far cry from the low-flying jets, the explosions, the shootouts on Friday. It's really calm right now. People are out in cafes. There's no gunfire, no sonic booms, but there's also a somberness, a sadness, prayers for the people who died on Friday after the festivities last night, the celebrations of safeguarding democracy.

"So there were a chorus of prayers in the mosques for the dead, and there's also a sense of fear and dread, especially among those who don't support Erdogan. Concern about what comes next after all that happened on Friday."