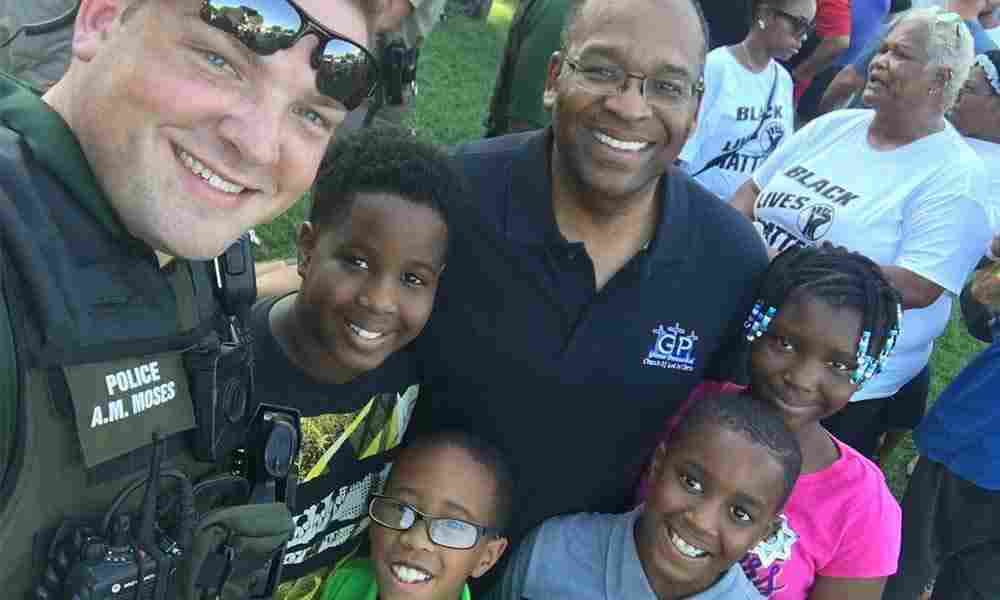 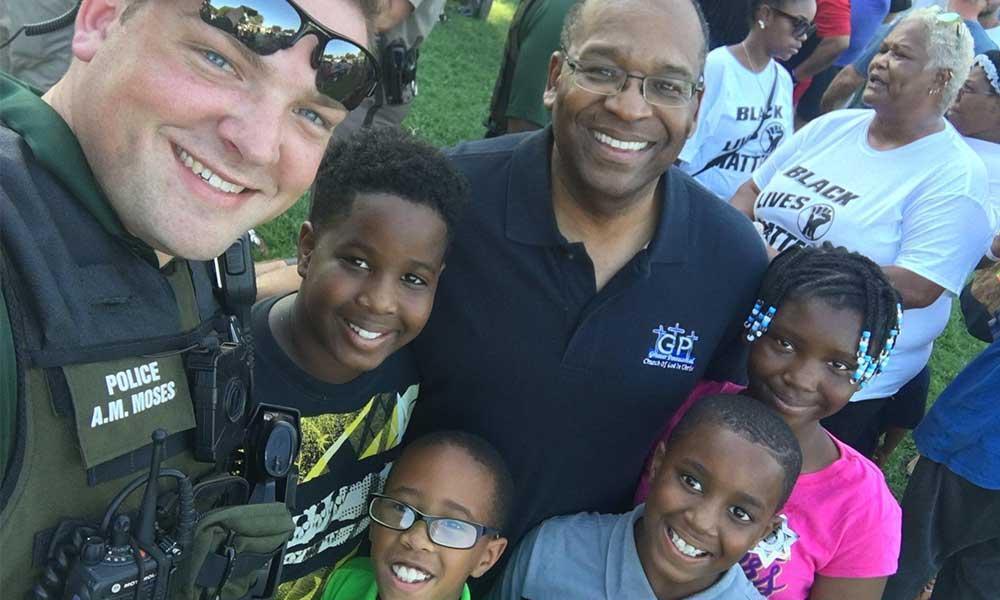 A Wichita police officer poses with residents at the First Steps Community Cookout on Sunday.

Members of the Wichita, Kan., police department spent Sunday afternoon eating and talking with people from the community, at a cookout that was planned with the local Black Lives Matter group.

The event was called the First Steps Community Cookout — a reference to its goal of bridging the gap between police and the community they serve. Taking place instead of a protest that had been planned for Sunday, the cookout came about after Wichita Police Chief Gordon Ramsay had a lengthy meeting with activist A.J. Bohannon and other members of the local Black Lives Matter movement.

Bohannon told member station KMUW that the cookout gained even more importance after news emerged of a gunman's deadly attack on police officers in Baton Rouge on Sunday morning.

"We can get on the same page and say those things that are in Baton Rouge don't trickle over into Wichita, Kan.," Bohannan told KMUW. "My heart goes out to the families, those officers in Baton Rouge, but I think the fact that that did happen makes this event more meaningful. I definitely think this is a start for this community, and I definitely want to keep it going."

Photos from the scene show uniformed police officers — many of them wearing radios and other gear they use on patrol — talking with smiling residents, dancing and playing basketball at McAdams Park.

The cookout was a hit on social media, with Wichita Mayor Jeff Longwell noting that on his Facebook feed, news about police hanging out and dancing with would-be protesters had risen above the feud between Taylor Swift and Kim Kardashian to top the list of trending topics. 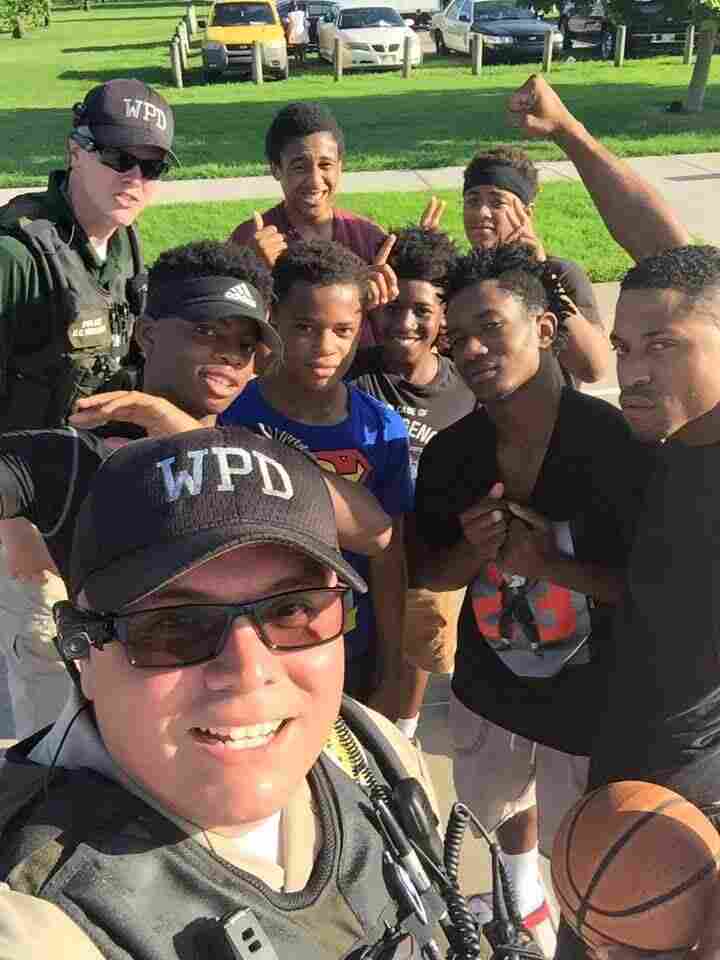 Officers pose with young men on a basketball court during a community cookout in Wichita, Kan. Wichita Police hide caption 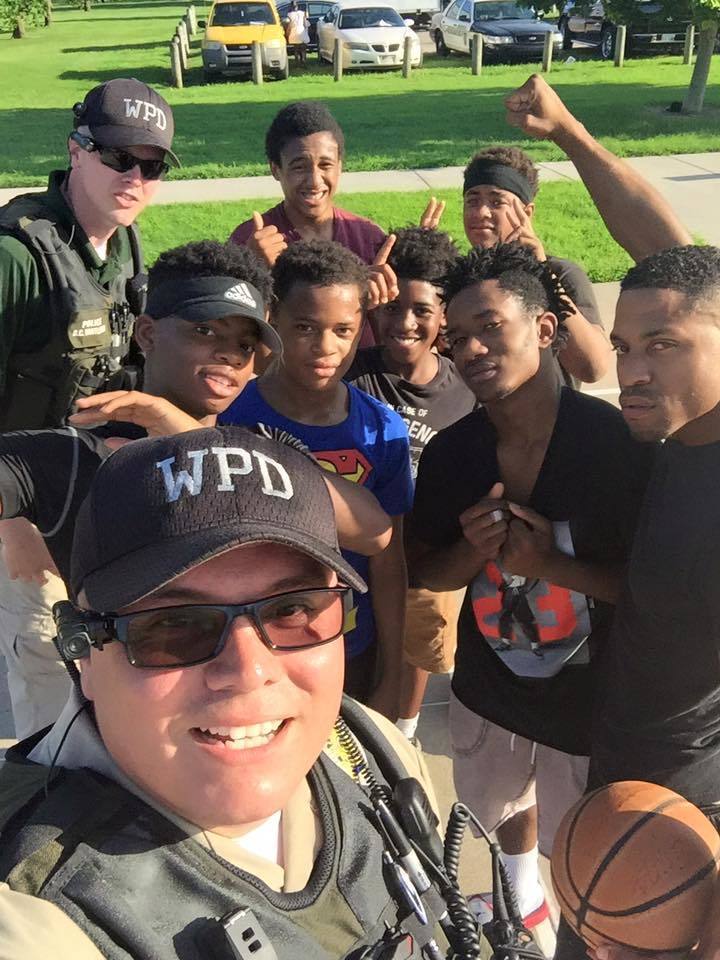 Officers pose with young men on a basketball court during a community cookout in Wichita, Kan.

One photo in particular drew some notice because of a young man's unsmiling pose alongside several officers — but that young man, MarQuell Woods, later posted an update on his Facebook page, declaring that he was "playing ball with students from West High School. I should have smiled I guess but we had fun."

A woman who says her kids are in the photo echoed that idea, calling the event historic and saying, "It was a bonding moment where the police saw them as children and my [sons] got to see them as people! It was a great first step Chief Gordon Ramsey and Wichita PD!"

The Wichita Eagle reports on another scene from the cookout:

"At one table, three men — a black man, a Hispanic man and a white man — sat down with burgers next to police Lt. Travis Rakestraw to share their ideas.

"It was the first time since 1992 that Jarvis Scott, the black man, said he'd sat down with a police officer, and the other two said it was their first time ever sitting down with an officer."

After the event, Ramsay thanked those who came — and issued a challenge to other police departments to hold similar barbecues.

"It takes two parties to make a healthy relationship," the police chief said.

In response to one of the department's many tweets about the barbecue, one Twitter user wrote, "This makes me happy! First time in a while that anything in the news made me smile. There is hope."

The cookout also echoes a theme that we here at NPR have been covering lately: noncomplementary behavior, the act of departing from an established script when that script is likely to lead to conflict. In this case, both sides departed from what could have been a now-familiar story of clashes between protesters and police.

Our friends at the Invisibilia podcast explored other examples of noncomplementary behavior in their most recent episode.