Accessibility links
Crane Collapses On Tappan Zee Bridge In New York, Injuring 5 : The Two-Way No cars were hit when the crane crashed from the new, under-construction Tappan Zee Bridge onto the existing bridge. Two employees and three motorists were injured. 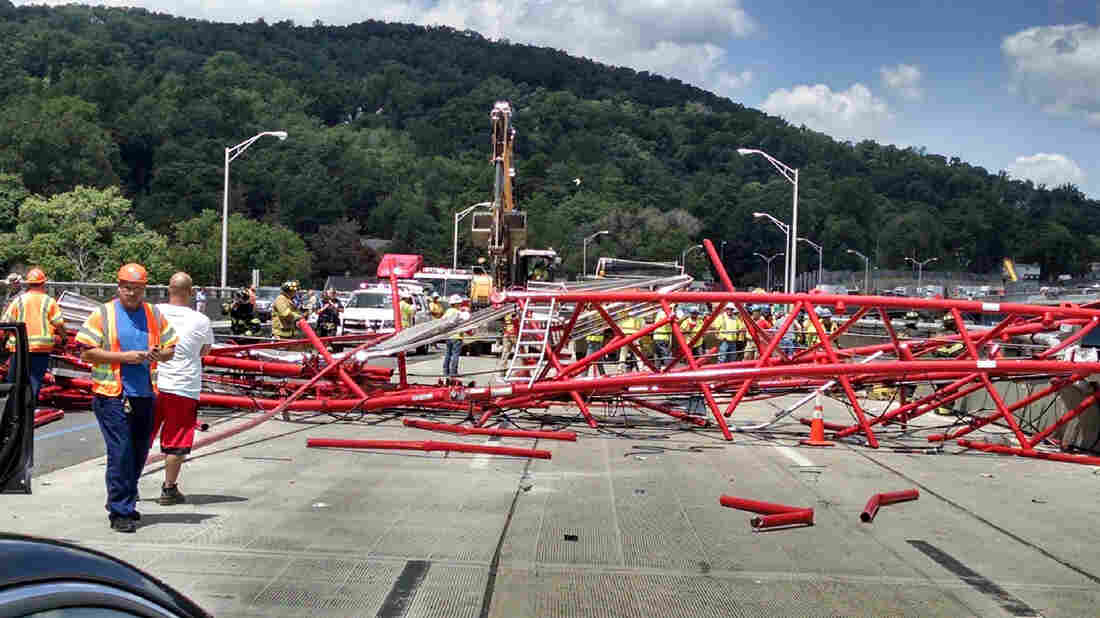 A giant crane sits on the roadbed of the Tappan Zee Bridge north of New York City after toppling around noon on Tuesday, during construction of a new bridge. David Leibstein/AP hide caption 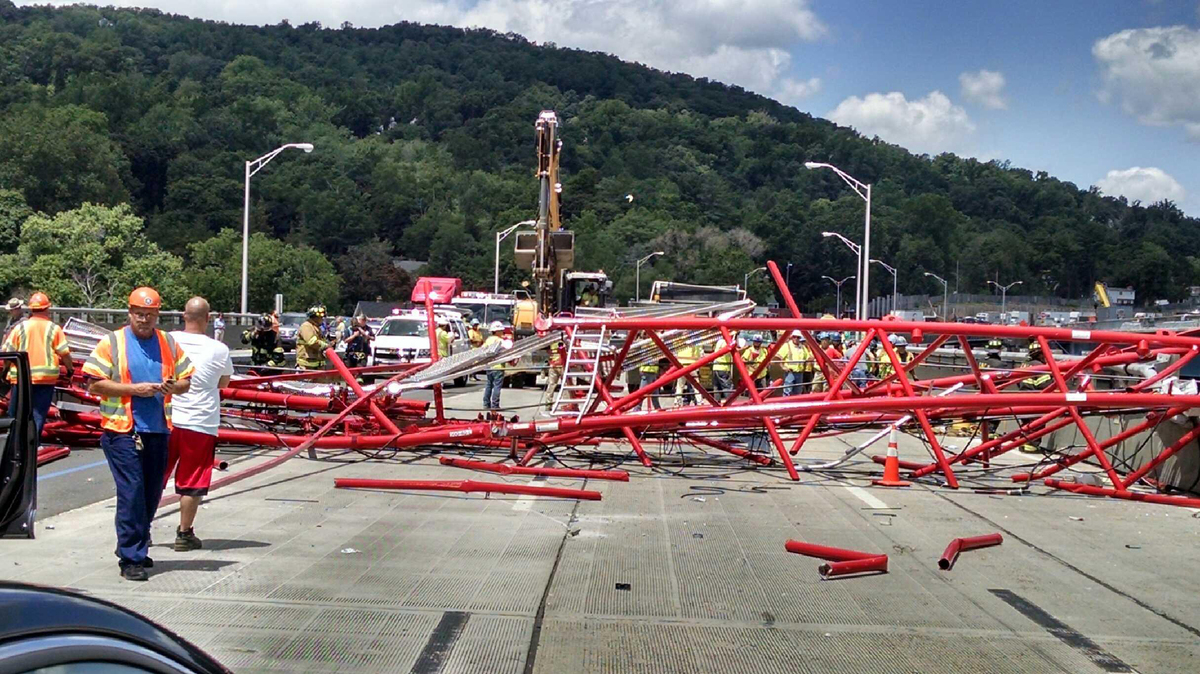 A giant crane sits on the roadbed of the Tappan Zee Bridge north of New York City after toppling around noon on Tuesday, during construction of a new bridge.

A crane collapsed on the Tappan Zee Bridge in New York on Tuesday, injuring two workers and three motorists — but not hitting any cars.

The crane was working on the new, replacement bridge, which is under construction, when the arm of the crane came crashing down on the old, currently used bridge.

The injured motorists were hurt as vehicles swerved and quickly braked to avoid the crane and debris, The Associated Press reports.

The cause of the crane failure is currently under investigation, New York Gov. Andrew Cuomo said at a news conference Tuesday afternoon.

The bridge, which crosses the Hudson River, is an important crossing point and carries more than 130,000 vehicles a day, according to the New York State Thruway Authority. The existing bridge is more than a half-century old.

Cuomo said the bridge would be closed until investigators can verify that it did not suffer any structural damage in the accident.

"Until that structural inspection is done, we are not comfortable — I am not comfortable — reopening the bridge," he said. "It's a very old bridge that has been pieced together for a very long time. It should have been replaced decades ago."

[Update at 5:45 p.m: Northbound lanes on the bridge have been reopened for traffic, but the southbound lanes remain closed.]

The crane that collapsed was a new crane, working on a routine task, Cuomo said.

Terry Towle, the president of Tappan Zee Constructors, said they will be looking into whether the collapse was due to the crane, the vibratory hammer it was holding up or operating error.

The AP has more on the crash:

"The base and treads of the large, movable crane sat on the unfinished new bridge, which crosses the river between Westchester and Rockland counties. Officials didn't immediately give the length of the collapsed crane, but part of the broken arm lay across the entire 90-foot, seven-lane width of the old bridge, which runs parallel to the new one. Another section lay across a construction platform in the water between the two spans.

"After the crash, several boats carrying emergency workers maneuvered in the river around the collapsed crane arm, while other workers appeared to be scanning the water around the wreck."

The wire service notes that people who were unharmed by the crash were left stranded on the bridge, trapped by the resulting traffic snarl.