Accessibility links
European Leaders Urge NATO Solidarity; Trump Sets Conditions, Should He Be Elected : The Two-Way The NATO secretary-general and others maintain alliance members should always defend one another. Trump says U.S. participation depends on members paying their share of the cost. 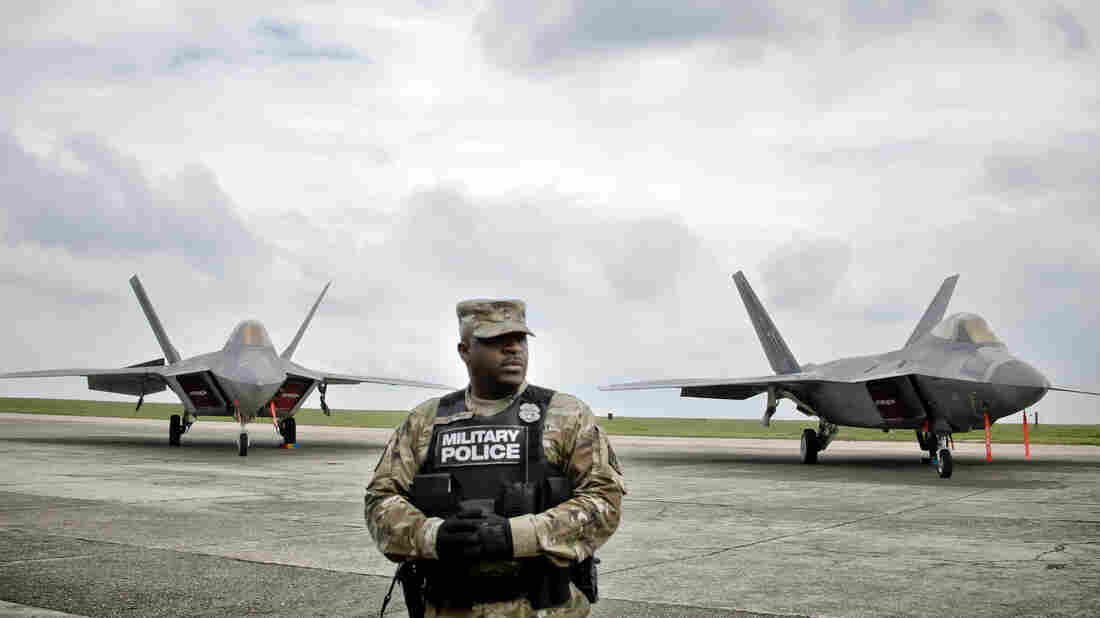 A U.S. military policeman stands in front of Air Force fighter jets that were part of a NATO show of strength in Romania in April intended to deter Russian intervention in Ukraine. Andreea Alexandru/AP hide caption 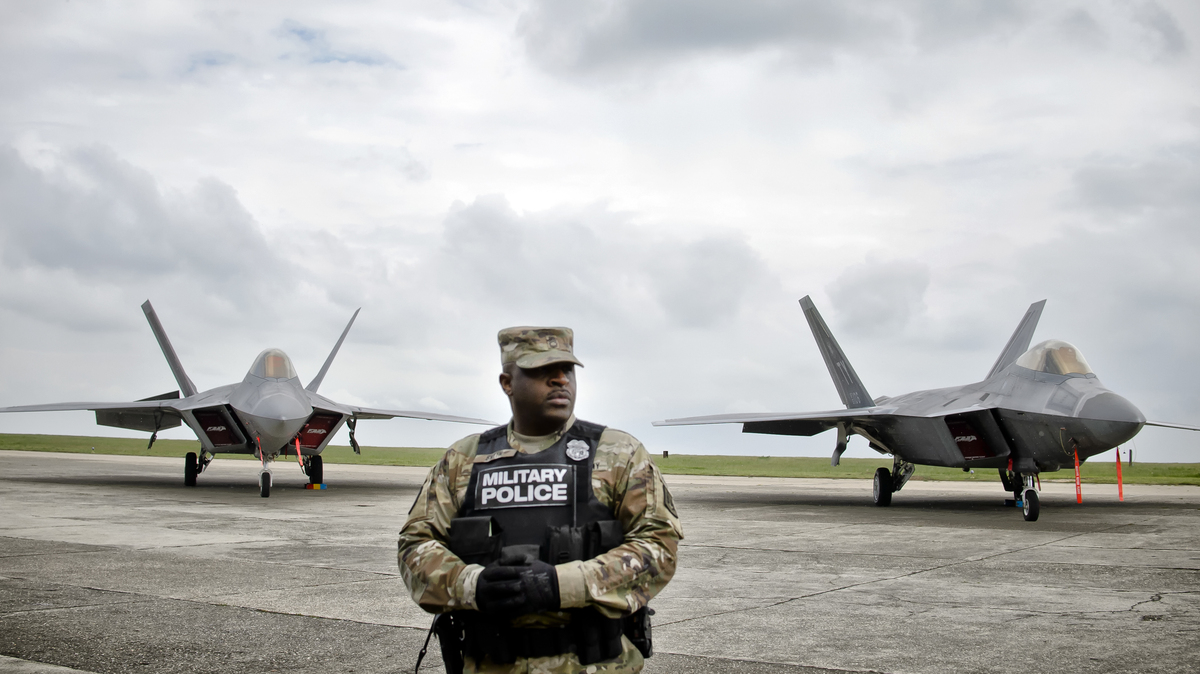 A U.S. military policeman stands in front of Air Force fighter jets that were part of a NATO show of strength in Romania in April intended to deter Russian intervention in Ukraine.

European leaders hailed what they called the wisdom of mutual defense on Thursday after Donald Trump raised doubts about his commitment to America's NATO obligations if he's elected president.

The Republican nominee told the New York Times that before he'd intervene to help Baltic members of the North Atlantic Treaty Organization in a potential crisis with Russia, he'd review whether those nations "have fulfilled their obligations to us ... If they fulfill their obligations to us, the answer is yes."

Mutual defense is the bedrock principle of the 28-member Atlantic alliance, created to enable European militaries to fight together during the Cold War in case of an attack by the Soviet Union. NATO's Article V dictates that an attack on one member is considered an attack on them all.

Trump, however, has faulted many NATO members as what he calls freeloaders, falling short of their obligations to contribute at least 2 percent of their gross domestic product in defense spending. His criticism on that issue is a familiar note of complaint for American secretaries of defense, but his declaration that he'd have to review "obligations" before aiding a NATO member appeared to be a new position.

According to a transcript released by the newspaper, Times Washington correspondent David Sanger asked Trump about the danger Russia poses to the Baltic States following its military seizure of parts of Ukraine. As president, would he come to their aid?

"TRUMP: I don't want to tell you what I'd do because I don't want Putin to know what I'd do. I have a serious chance of becoming president and I'm not like Obama, that every time they send some troops into Iraq or anyplace else, he has a news conference to announce it.

"SANGER: They are NATO members, and we are treaty-obligated ——

"TRUMP: We have many NATO members that aren't paying their bills.

"SANGER: That's true, but we are treaty-obligated under NATO, forget the bills part.

"TRUMP: You can't forget the bills. They have an obligation to make payments. Many NATO nations are not making payments, are not making what they're supposed to make. That's a big thing. You can't say forget that.

"SANGER: My point here is, Can the members of NATO, including the new members in the Baltics, count on the United States to come to their military aid if they were attacked by Russia? And count on us fulfilling our obligations ——

NATO Secretary-General Jens Stoltenberg responded carefully on Thursday, not faulting Trump, telling BuzzFeed News that NATO was as good for the U.S. as it is for Europe.

"Solidarity among allies is a key value for NATO," Stoltenberg said. "This is good for European security and good for US security. We defend one another."

Estonian President Toomas Hendrik Ilves also didn't allude to Trump by name, but declared on Twitter that his nation met his defense spending obligations and supports all member nations.

"We are equally committed to all our NATO allies, regardless of who they may be," he wrote. "That's what makes them allies."

Ilves pointed out that Estonia responded to the Sept. 11 attacks on the U.S. — the only time NATO's Article V has ever been invoked — by joining the international deployments of troops to Afghanistan.

International commentators are sounding alarm bells about what they call Trump's concessions to Russia and its president, Vladimir Putin. The two men have praised each other generally in public comments, but Jeffrey Goldberg of the Atlantic contends there's much more going on in the positions Trump and the GOP are taking.

Russian chess master Garry Kasparov, an outspoken critic of Putin and Trump, observed that Trump and allies inside the Republican Party changed language in the platform ahead of this week's convention in Cleveland that weakened the official support for arming Ukraine: "The Trump staff got the language changed to 'appropriate assistance,' a meaningfully meaningless phrase that no doubt pleased Putin very much."

Before his comments on Thursday about NATO's Article V, however, Trump's criticism of NATO was a mainstream position within national security circles in Washington. Pentagon officials have griped for years that only a handful of the 28 members in the alliance meet their spending commitments and that Europe's wealthiest powers, including France and Germany, do not.

Secretaries of Defense Robert Gates and Leon Panetta also complained about NATO's bureaucracy and what they call its inability to put its theoretical strength into practical deployments on the battlefield.

In the 2011 Libya intervention, for example, the European air forces found they didn't have enough bombs.

"The mightiest military alliance in history is only 11 weeks into an operation against a poorly armed regime in a sparsely populated country — yet many allies are beginning to run short of munitions, requiring the U.S., once more, to make up the difference," Gates charged then in Brussels.

Unless NATO could prove itself, Gates warned, a new generation of Americans and political leaders who grew up after its Cold War heyday would begin to seriously question whether the U.S. should preserve its commitment to the alliance.

"The blunt reality is that there will be dwindling appetite and patience in the U.S. Congress — and in the American body politic writ large — to expend increasingly precious funds on behalf of nations that are apparently unwilling to devote the necessary resources or make the necessary changes to be serious and capable partners in their own defense," he said.