Accessibility links
Munich Shooting Kills 10, Injures 27 : The Two-Way At least 27 people were injured in the shooting. Police now believe there was only one shooter, an 18-year-old German-Iranian man, born and raised in Munich. 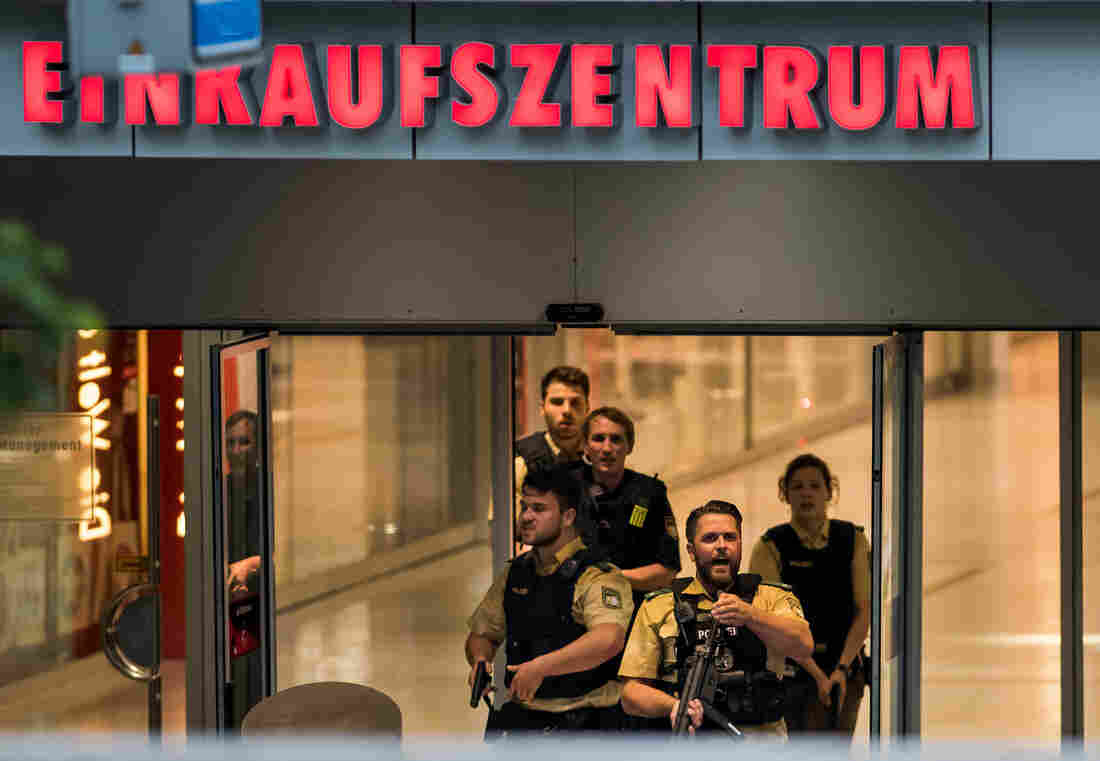 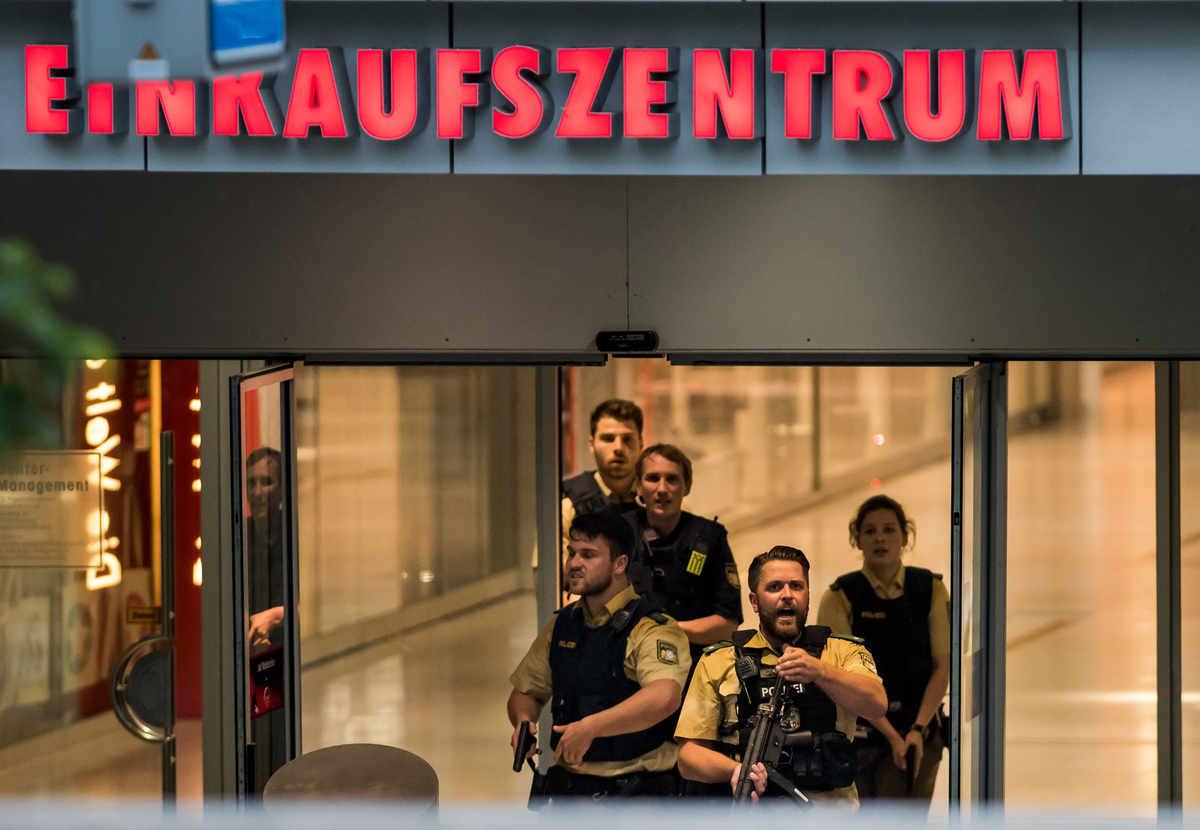 Police officers respond to a shooting at the Olympia Einkaufszentrum shopping center on Friday in Munich.

A shooting at a shopping mall in Munich has left at least 10 people dead, including the alleged attacker, and at least 27 people injured, the Munich police say.

Munich police chief Hubertus Andrae said at a press conference Saturday that the suspect was an 18-year-old German-Iranian man born and raised in Munich, armed with a handgun.

A search of the suspect's home turned up "no evidence" of links to the Islamic State group.

Investigators say they're looking into the suspect's mental state.

The suspect had no criminal record and his motive is unknown, Andrae said in an earlier press conference.

Police initially were acting on the assumption that there were at least three attackers, based on witness accounts. Andrae said Saturday that several people rapidly left the site of the scene, but police now believe they were not involved in the attack.

He said there is no reason to believe the shooter had any accomplices.

Adolescents were among the dead, and children among the wounded, Andrae said. 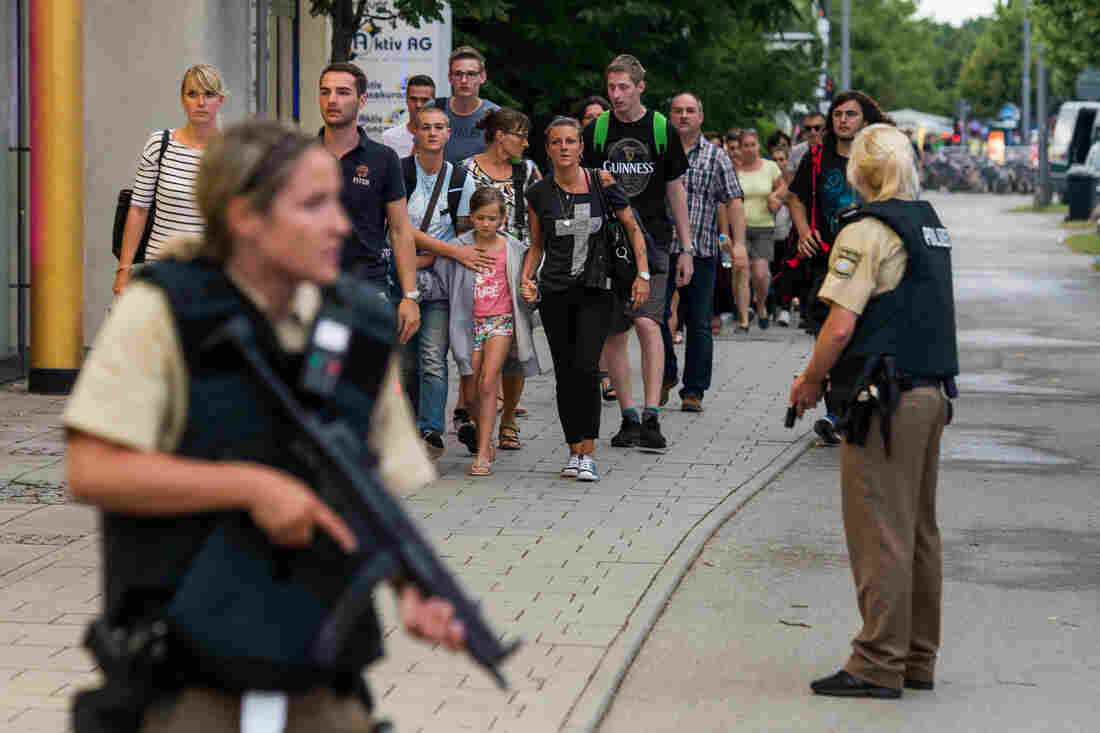 Police officers escort people from inside the shopping center as they respond to a shooting in Munich. Police believed shooters were still at large and urged residents to stay indoors. Joerg Koch/Getty Images hide caption 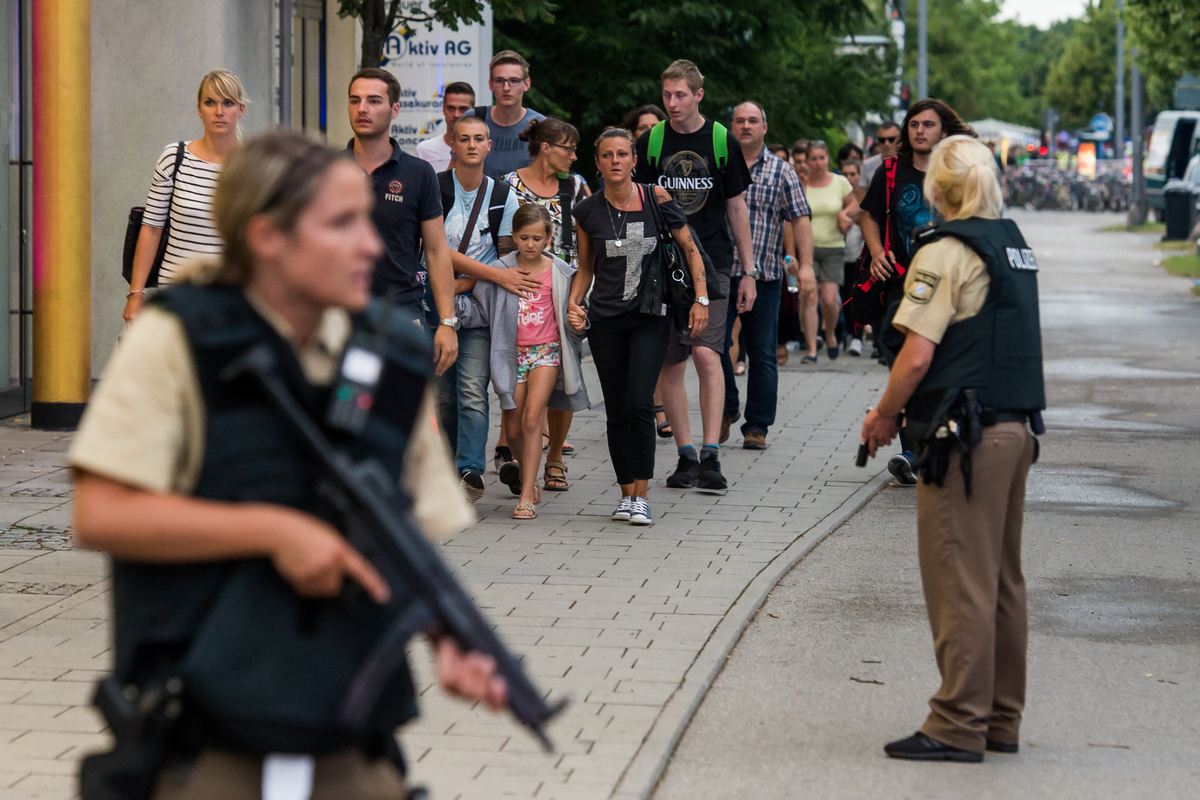 Police officers escort people from inside the shopping center as they respond to a shooting in Munich. Police believed shooters were still at large and urged residents to stay indoors.

Police spent hours scouring the city for suspected gunmen after the shooting — 2,300 police were mobilized, Andrae said. Germany's elite anti-terrorism force was called in to help with the search.

The mall was entirely evacuated. Public transportation was shut down in the area, and police were urging residents to remain indoors and avoid public areas. The U.S. Consulate reinforced those warnings, telling any U.S. citizens in Munich not to travel to the consulate and to shelter in place instead.

"Munich is very much a ghost town," NPR's Soraya Sarhaddi Nelson said earlier Friday, with people following instructions to stay off the streets.

On Twitter, people used the hashtag #OffeneTür — or "open door" — to offer their homes for people to stay if they were on the street far from their own homes or stranded by the lack of transportation. The newspaper Islamische Zeitung tweeted that mosques across the city will stay open overnight as a refuge to stranded citizens.

The attack began at a McDonald's near the Olympia shopping center, police say, shortly before 6 p.m. local time.

Some videos online purport to show the attack, or scenes afterward. The police have asked individuals to upload any videos or photos to authorities instead of posting them online.

Angela Merkel's chief of staff, Peter Altmaier, described the attack as "cruel and inhumane," Reuters reports, and said the government is giving security and intelligence services the support they need to investigate.

Altmaier also said the government will do all it can to prevent extremist attacks, and has successfully intercepted planned attacks in the past, Reuters reports. But, he said, short of establishing a "surveillance state," absolute security is impossible.

The White House has condemned the shooting as "an apparent terrorist attack."

Soraya notes that Munich was already on edge because of an ax and knife attack earlier this week. That attack, allegedly carried out by a 17-year-old Afghan, was in the town of Wurzburg, north of Munich, in the same state of Bavaria.

"Munich is also known as one of the safest cities, if not the safest big city, in Germany," she says. "So this is all very confusing to people. [Residents] are trying to cooperate with authorities but they are also very much afraid."