Accessibility links
Dozens Killed In Attack On Protest March In Afghanistan : The Two-Way Afghan authorities say that at least 80 people were killed and 231 were injured in the attack. The Islamic State claimed responsibility, saying it was targeting a "gathering of Shiites." 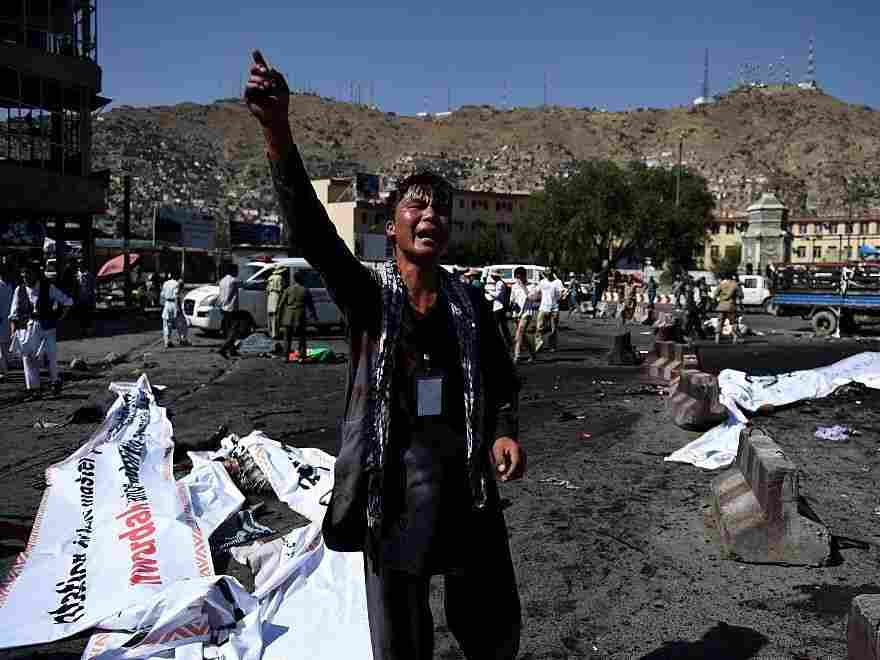 An Afghan protester screams near the scene of a suicide attack that targeted crowds of minority Shiite Hazaras during a demonstration in Kabul on Saturday. Wakil Kohsar /AFP/Getty Images hide caption 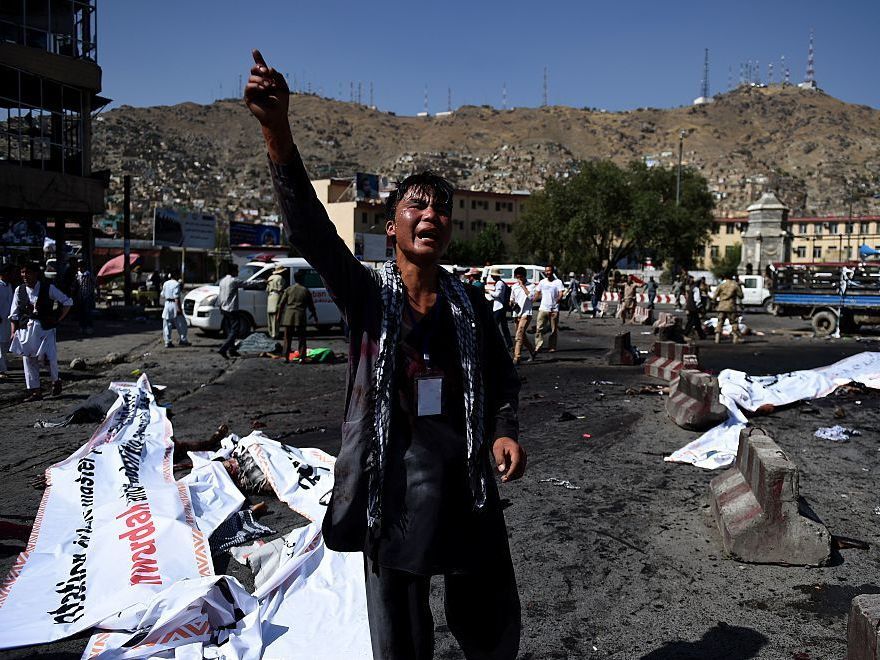 An Afghan protester screams near the scene of a suicide attack that targeted crowds of minority Shiite Hazaras during a demonstration in Kabul on Saturday.

An attack on a protest march by Afghanistan's minority Hazara community in Kabul has killed dozens of people.

Afghan authorities said that at least 80 people were killed and 231 were injured in the attack, according to The Associated Press and Reuters.

The Islamic State claimed responsibility for the attack through its Aamaq news agency. The purported claim was reported by SITE Intelligence Group, which monitors militant websites. It says two of the group's fighters detonated explosive belts and were targeting a "gathering of Shiites."

"This is the first time the Islamic State has made any kind of attack in an urban area in Afghanistan. They've basically been limited to rural Eastern Afghanistan," journalist Jennifer Glasse in Kabul told weekend All Things Considered.

Thousands of demonstrators march towards the center of Kabul, Afghanistan on Saturday. Rahmat Gul/AP hide caption

The Taliban has killed thousands of Hazaras, as NPR has reported. It condemned this attack and denied involvement, according to the BBC.

The thousands-strong march through Kabul on Saturday was demanding that "a major regional electric power line be routed through their impoverished home province," as the AP reports. Government officials had rebuffed their calls, saying that rerouting the line "would cost millions and delay the badly needed project by years."

Demonstrators "chanted slogans against President Ashraf Ghani and Chief Executive Abdullah Abdullah, shouted 'death to discrimination' and 'all Afghans are equal, '" as The Associated Press reported.

"The streets had been blocked off by the government to prevent the demonstration from getting to the presidential palace. The demonstrators had been setting up tents in the middle of this street when the suicide bombers detonated, killing dozens of people. And because the roads were closed because of the demonstration, it was very difficult for people to get to the hospitals. After the explosions went off, there were bodies scattered down the street."

Peshgam TV posted video apparently showing the quiet, peaceful moments prior to the attack. Demonstrators chat in small groups and sit in the shade.

Then, at 1:13, the video cuts to the immediate aftermath. The shaky footage shows terrified protesters shouting and running for their lives as smoke rises in the distance. In the final moments, it shows a number of bodies lying on the ground.

(WARNING: starting from 2:30, there is graphic footage showing severe injuries.)

Witnesses describe a scene of devastation at the bomb side. As the BBC reported, a freelancer working for its Afghan service said "blood and body parts were everywhere, with debris strewn around."

The Times spoke with Muhammed Ali, a protester "whose clothes were covered in blood." He said "he had personally loaded dozens of dead bodies into trucks."

"People were going toward a prayer break when two explosions happened — one near the truck where speeches were given," Ali told the Times.

Ghani issued a statement condemning the attack and saying he was "deeply grieved." He added: "[H]olding protests is the right of every citizen of Afghanistan and the government puts all efforts to provide security for the protestors, but terrorists entered the protests, and carried out explosions that martyred and wounded a number of citizens including members of security and defense forces."

As Glasse noted, Ghani ordered a new military offensive this week against the Islamic State group in eastern Afghanistan.

The White House also condemned the attack, saying that it "was made all the more despicable by the fact that it targeted a peaceful demonstration." It added that the U.S. and "the international community stand firm in our ongoing support for the people and Government of Afghanistan."