Accessibility links
'Miss Cleo,' Fortuneteller Of '90s TV Fame, Dies At 53 : The Two-Way Youree Dell Harris became a cult celebrity as the face of a psychic hotline — saying "Call me now" in her distinctive, dubious patois. The role meant fame, but also a lifelong association with fraud.

"Miss Cleo," the television psychic indelibly fixed in the memories of '90s TV-watchers, died Tuesday in Palm Beach, Fla., of cancer. She was 53.

In late-night commercials in the late '90s and early 2000s, she promised answers to all life's most pressing questions. What should I be doing? Which person should I be with? Is my life on the right path? Who's the father?

"The cards never lie," she'd say, to questioning souls she called "darling" or "baby" or "honey."

"Call me today," she'd intone, with a broad smile and a Jamaican patois of dubious authenticity.

She was also the face of a fraud empire.

Before she was Miss Cleo, Harris was a Los Angeles-born playwright and actress.

As "Ree Perris," she was working in Seattle in the mid-'90s, the Seattle Post-Intelligencer revealed in 2002. In one of the plays she wrote and produced, Harris played a Jamaican character — named Cleo.

She "left town with a trail of debts and broken promises," the paper wrote, after failing to pay the cast and crew who worked on plays she put on.

Then she appeared on TV screens as the tarot-reading Miss Cleo, promising a no-cost first reading. 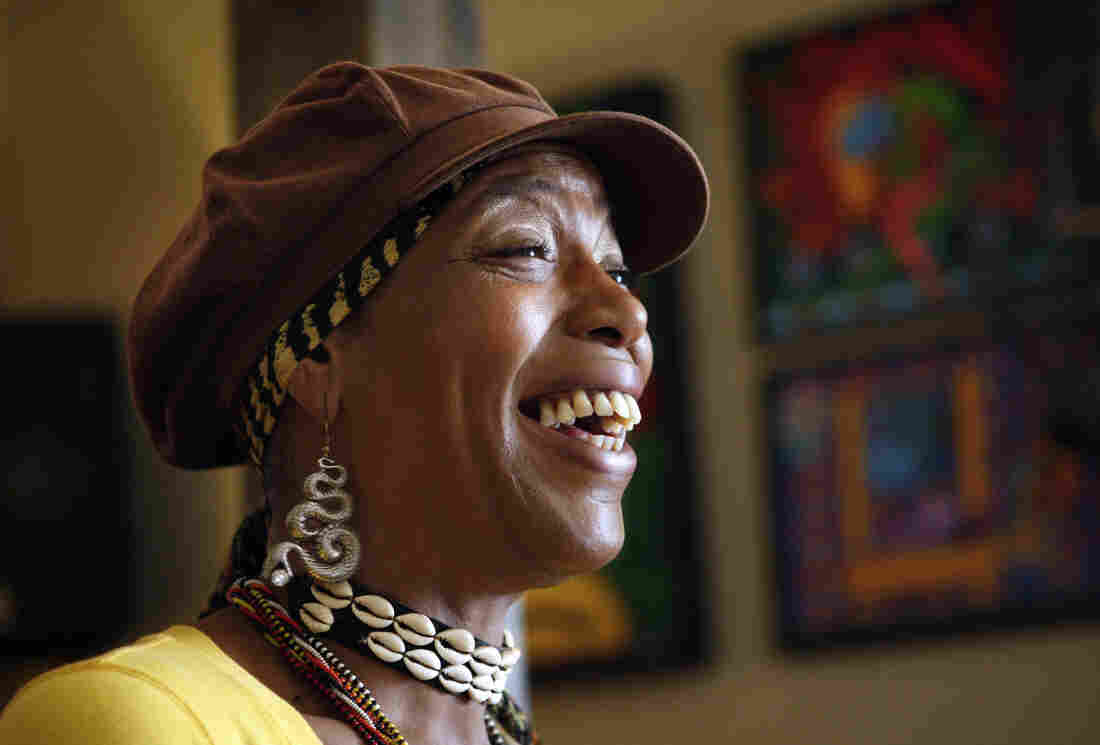 Cleo Harris, best-known as Miss Cleo, the face and voice of the Psychic Friends Network television ads, in February 2009 in Lake Worth, Fla., where she lived and hosted an Internet radio show. Lilly Echeverria/Miami Herald/MCT via Getty Images hide caption 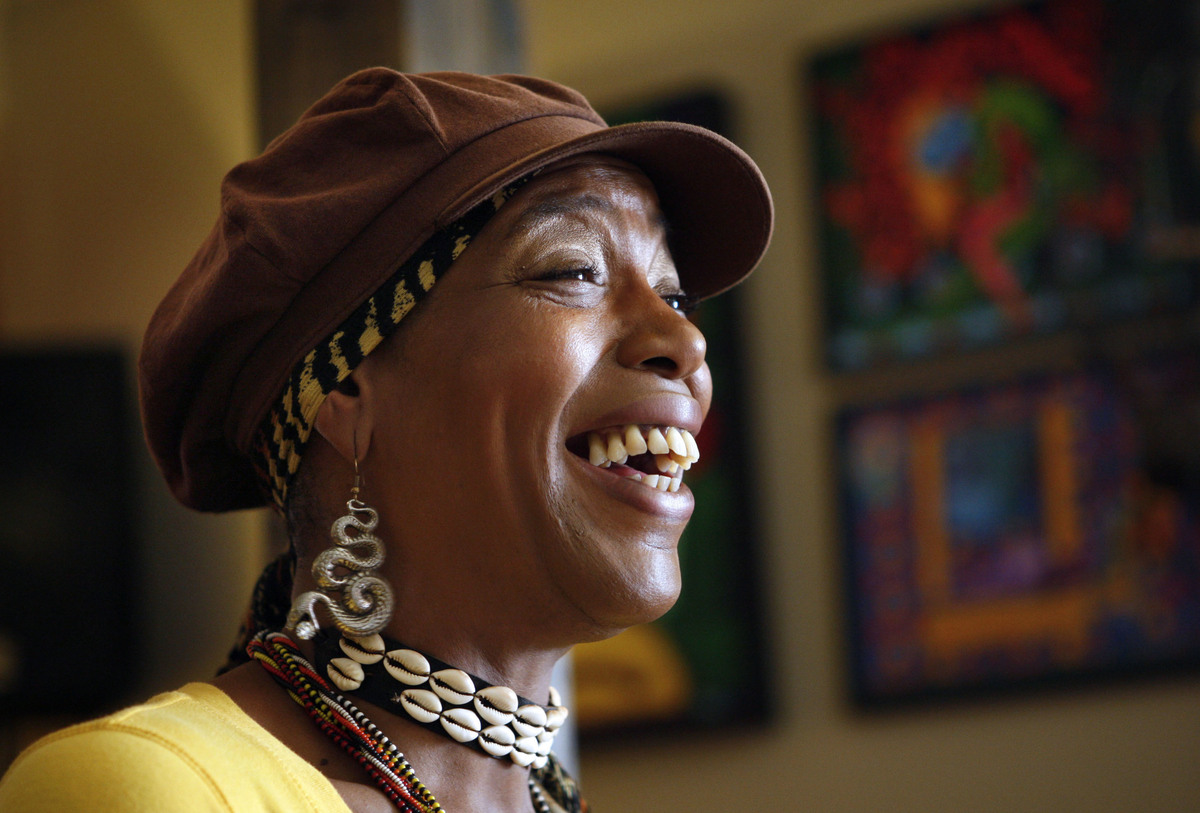 Cleo Harris, best-known as Miss Cleo, the face and voice of the Psychic Friends Network television ads, in February 2009 in Lake Worth, Fla., where she lived and hosted an Internet radio show.

If a free session with a psychic who can answer all your questions sounds too good to be true, it was. Because, well, it wasn't free.

The Federal Trade Commission filed a complaint against The Psychic Readers Network, the company behind the "Miss Cleo" hotline, for telling viewers they would get a "free" reading and then charging them. The company also bullied people into paying charges they weren't legally obligated to pay.

J. Howard Beales III, then the director of the Bureau of Consumer Protection at the FTC, clearly enjoyed the press releases.

"You don't need a crystal ball to know that the FTC will continue to stop unfair and deceptive trade practices," he said when the complaint was announced.

"I'm no psychic, but I can foresee this: If you make deceptive claims, there is an FTC action in your future," he said when it settled.

But the lawsuit was no joke. PRN agreed to forgive $500 million in outstanding charges and paid $5 million in fines to the FTC.

While Miss Cleo was never alleged to be the mastermind of the enterprise, she was undeniably its embodiment. For years afterward, people pinned the fraud on her, and even claimed she served prison time for it.

And the hundreds of millions of dollars PRN raked in? Harris said she had "a bad contract" and made a fraction of the money that her likeness brought in.

She also told Vice that her patois was indeed put on — but it did have family roots. "When you grow up in America and you're Caribbean, your parents beat it into you that the only way to succeed is by dropping the patois. My mother was very deliberate about that, and so was my father," she said.

And, in case you hadn't figured this one out, Miss Cleo wasn't really psychic.

"I come from a family of Obeah — which is another word for voodoo," she told Vice. But the hotline marketers thought "voodoo" sounded scary.

Oddly enough, while PRN was penalized for its fraudulent billing practices, there was never much outcry over the fact that "Miss Cleo" — like the many other employees who worked the phone lines at PRN, reading off scripts — couldn't really predict the future.

In 2002, Slate writer Dahlia Lithwick waxed indignant about that oversight. Enraged that the FTC wasn't penalizing false claims of clairvoyance, she learned that proving someone isn't psychic is — as the assistant attorney general in Florida put it — "almost a legal impossibility."

So if those "free psychic readings" had really been free, whether or not they were psychic, Miss Cleo and company would have been in the clear.

As it was, Harris became indelibly associated with the fraud. In a 2014 documentary called Hotline, she spoke emotionally about how it felt to be seen as a liar by countless strangers.

Long after the ignominy of the fraud, Miss Cleo remained an instantly recognizable figure.

She was parodied by Mad TV and Dave Chappelle. Multiple soundboards let anyone channel their inner Miss Cleo.

She returned at the end of 2014 to promote French Toast Crunch, in an apotheosis of '90s nostalgia. That sparked a legal conflict of its own, as PRN claimed it had invested millions in building up the Miss Cleo brand and that Harris was barred from using it anywhere else.

Meanwhile, Youree Dell Harris was living a quieter life. She voiced "Auntie Poulet" in 2002's Grand Theft Auto: Vice City. She served as a "spiritual counselor" for her South Florida community and started a company to support independent entrepreneurs and artists.

In 2006, she came out in Advocate magazine. She said that she had never felt bad about being a lesbian, "but I knew society didn't accept me."

Marketers Turn To Memories Of Sweeter Times To Sell Cereal

For instance, she says, her high school girlfriend was sent to college out of state after the girl's father found out about their relationship. Harris was heartbroken.

While her parents and some family members knew she was gay, she never told other relatives, out of "fear of the wrath, of the exile." In the '80s, she lost some friends when she came out to them. "That was really intense," she said. "I really believed they were my friends."

After a short-lived marriage to a man, Harris had been in two long-term relationships with women. Her second partner was abusive to both Harris and her daughter, and when they broke up in the late '90s, Harris didn't try dating again for years.

In a second interview with the Advocate, she said it had been difficult returning to the world of dating. "I was thinking about launching a Web site," she said: " 'Let's find Miss Cleo a woman!' "

She was worried about what it would mean to come out, but not too worried, she told the Advocate: "There is Miss Cleo, and now it's going to be, 'Miss Cleo is gay.' I'm not sure how that is going to look, but as much bad stuff has been said about me up to now, what's another slur?"

And there were always fans, too — it wasn't just hate, she said.

"If I'm standing in line somewhere and I'm talking, someone will whip their head around and look at me. People give me mad love, sweetheart. They'll say, 'Do you see anything? Where do we find you? When are you coming back? We miss you.' I get a lot of love."

She died surrounded by family and close friends, her lawyer says, and was "a pillar of strength" throughout her illness.