Accessibility links
David Bald Eagle, Lakota Chief, Musician, Cowboy And Actor, Dies At 97 : The Two-Way He was also a war hero and a ballroom dancer — Bald Eagle's life is hard to fit in a headline. He parachuted into Normandy, acted in Westerns and starred in his first feature film at the age of 95. 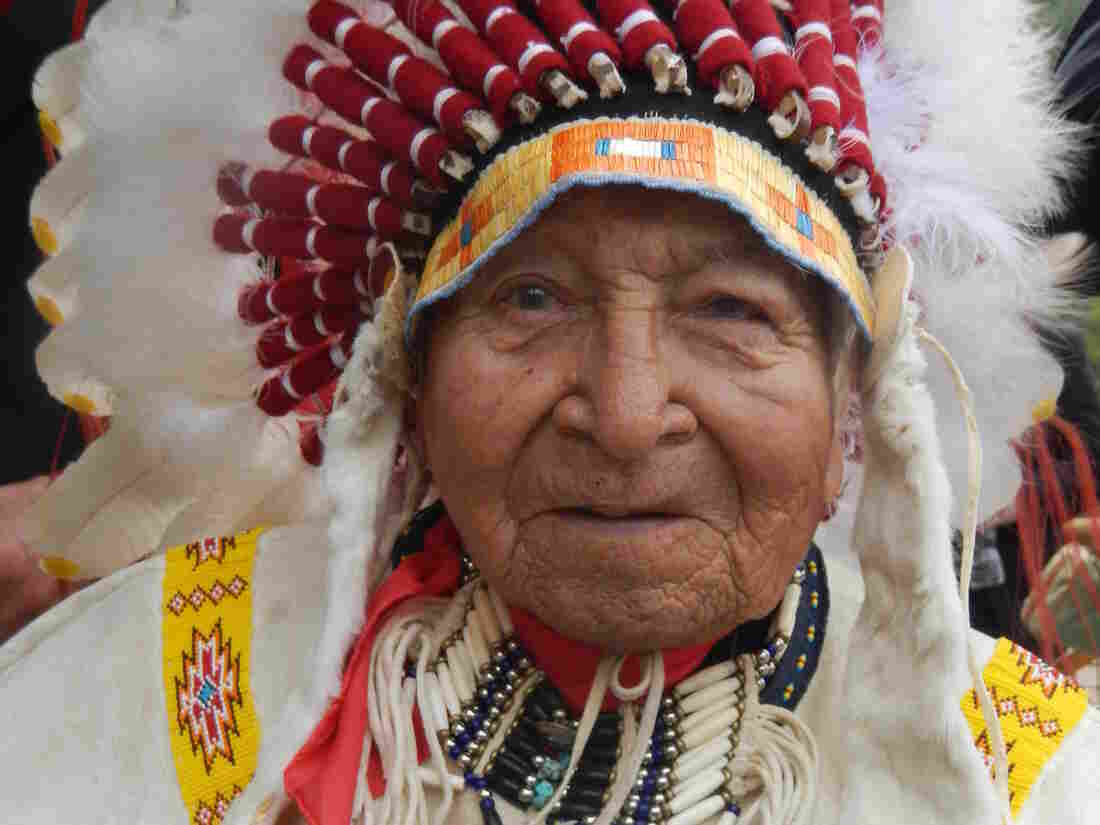 Chief David Beautiful Bald Eagle during the opening of the Days of '76 Museum in Deadwood, S.D. Bald Eagle died on Friday at the age of 97. Tom Griffith/Rapid City Journal via AP hide caption 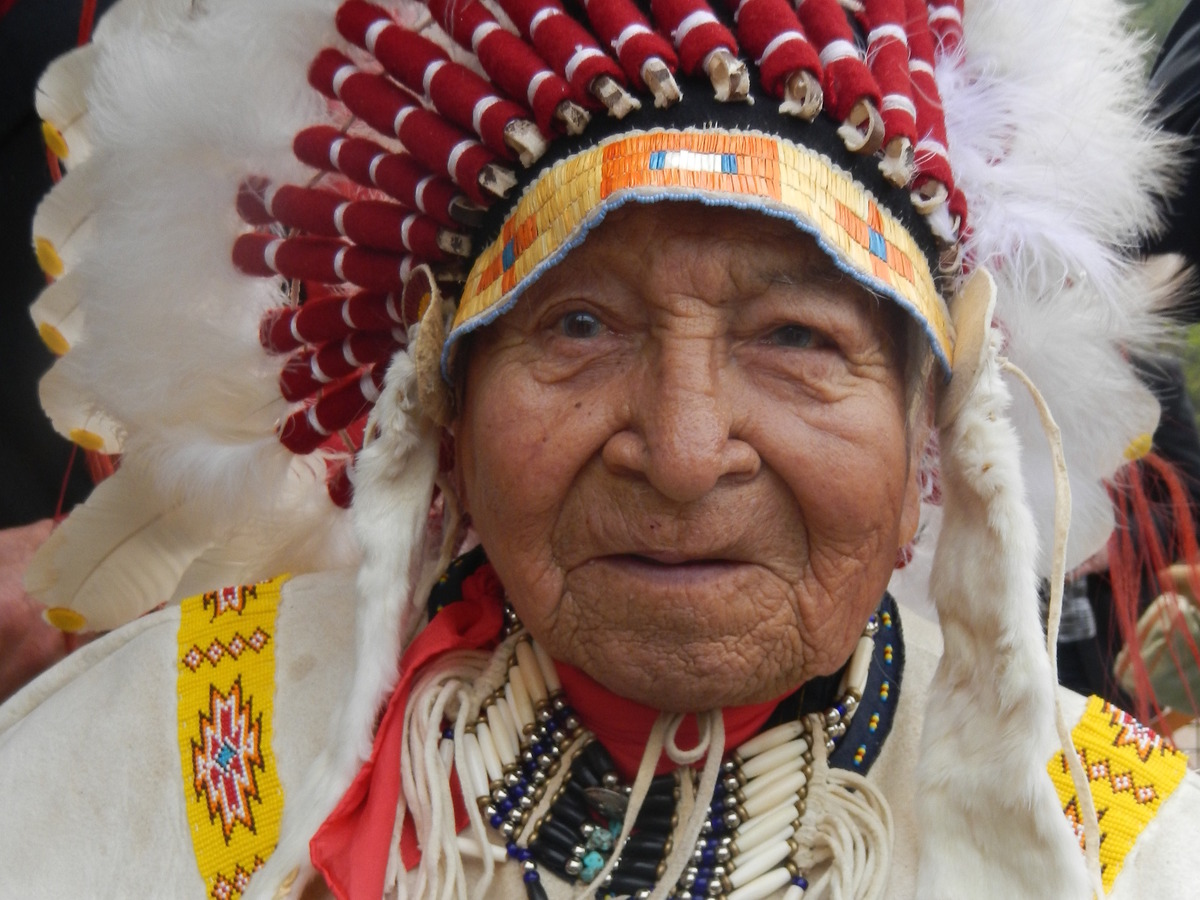 Chief David Beautiful Bald Eagle during the opening of the Days of '76 Museum in Deadwood, S.D. Bald Eagle died on Friday at the age of 97.

In the U.K., the headlines note the passing of a "Dances With Wolves actor."

But appearing in an Oscar-award-winning film was one of the least interesting things David William Beautiful Bald Eagle ever did.

Bald Eagle died last Friday at 97. In his long, extraordinary life, he was a champion dancer — both ballroom and Lakota styles — a touring musician, a rodeo cowboy, a tribal chief, an actor, a stunt double, a war hero.

He danced with Marilyn Monroe. He drove race cars. He parachuted into enemy gunfire at Normandy. He played professional baseball. He was a leader not just of his tribe, but of the United Native Nations. He was an advocate for Native people.

And he was a bridge between the past and present — a man who, in his childhood, heard stories from survivors of the Battle of Little Bighorn.

Bald Eagle — whose full Lakota name translates to Wounded in Winter Beautiful Bald Eagle, the BBC reports — was born in 1919. At the time, he couldn't be a U.S. citizen. He was 5 when America finally extended citizenship to indigenous people.

He lived with his grandfather White Feather as a child, the Rapid City Journal has written. His other grandfather was Chief White Bull, a relative of Sitting Bull and one of the leaders in the Battle of Little Bighorn. Both would tell young David their war stories, and exhort him to remember them.

Bald Eagle only spoke Lakota until he was 12, when he started school. He spent his teenage years learning English, playing sports — everything from pole vault to baseball — and competing in the rodeo.

He saw the West before barbed-wire fences and roads arrived, says his son, Kili Bald Eagle. "He used to tell me about how he could ride across the state and he'd never have to open a gate," Kili says.

As a young man Bald Eagle enlisted in the horse cavalry. A few years later it was mechanized: The Army swapped his horse for a motorcycle, and made him a messenger.

He was discharged on Dec. 7, 1941. After he'd signed his papers, he heard the news about Pearl Harbor. At his commander's request he reenlisted, joining as a paratrooper with the 82nd Airborne.

Sgt. Bald Eagle's first combat jump was during the invasion of Anzio, Italy. He was part of a regiment that fought so fiercely a captured German soldier called them "Devils in Baggy Pants."

Then he parachuted into Normandy, suffering severe injuries when he was accidentally dropped directly over German troops, an easy target for gunfire.

"We were just like clay pigeons, coming down. Most of my outfit was wiped out," he told the Rapid City Journal in 2001.

"The first medics to reach him left him for dead," the paper wrote. "But some British commandos came along and found he still had a pulse."

Bald Eagle survived. He started a musical career, as a drummer for Cliff Keyes' Big Band, the BBC reports.

While he was in the Army, he'd met and fallen in love with an English dance teacher named Penny Rathburn. After he returned from the war, they were married.

Penny was pregnant with their first child when she died in a car crash. Bald Eagle was devastated.

"I became pretty much suicidal from then on," he once said in an interview. "Why her, not me?"

So he took up dangerous pursuits.

His biography is filled with things that would have killed lesser men.

But when chasing death, he came across success. His work as a stunt double "made his name," according to Richard Bullock, who has written an obituary of Bald Eagle.

Shooting Westerns required "people who can actually ride horses," as Sonny Skyhawk puts it. Skyhawk is a member of the Sicangu Lakota Nation who has been a film actor for nearly four decades.

So Bald Eagle, a talented rider, went on to appear in dozens of Hollywood films — which is how he met, and danced with, Marilyn Monroe.

The Westerns he was in represented Native people as less than human, Skyhawk says: "We were always being shot down or killed. With one bullet five or more Indians would fall."

But Bald Eagle always tried to teach people about Native American history and life, whatever was happening around him, Skyhawk says.

"He excelled at being an educator, and did whatever it took, whatever his own power and talents, to bring that to the forefront," Skyhawk says. 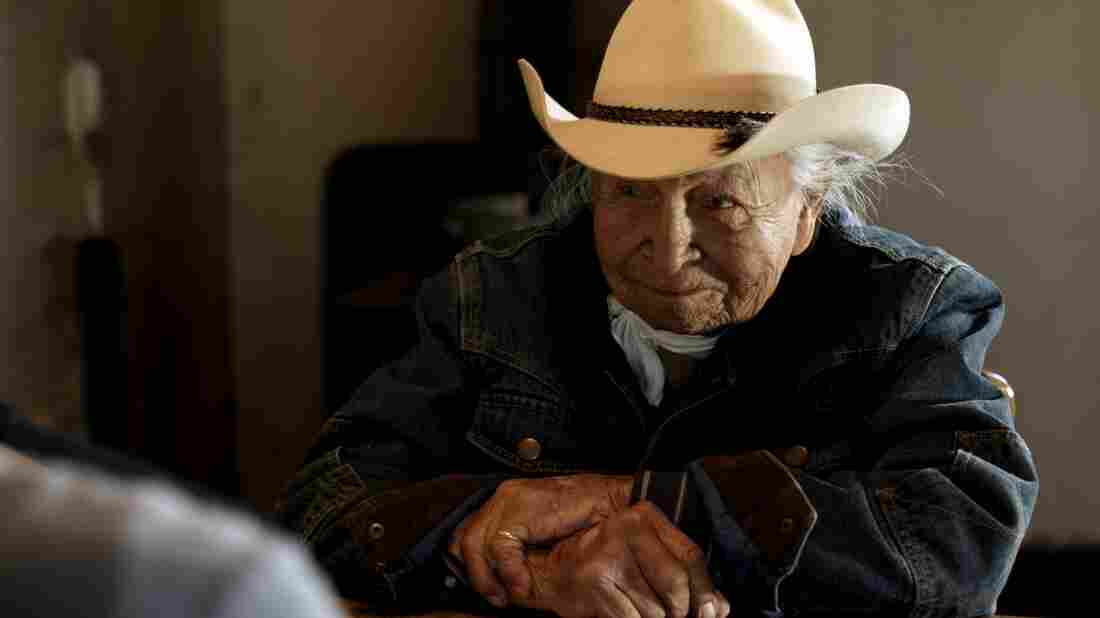 Dave Bald Eagle, at 95, playing the role of Dan in Neither Wolf Nor Dog. Courtesy of Steven Lewis Simpson hide caption 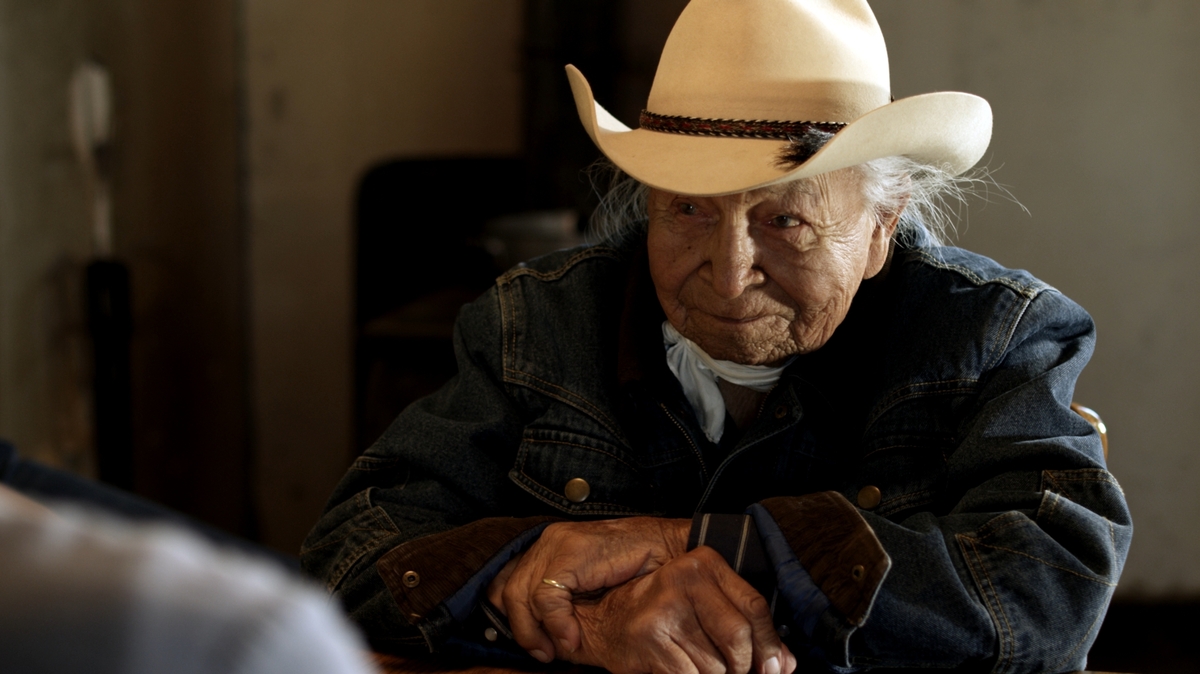 Dave Bald Eagle, at 95, playing the role of Dan in Neither Wolf Nor Dog.

At one point in his life, he played semi-pro baseball in Minnesota, as a catcher. He was also a Lakota dancer — a champion in that, too.

And he toured with Casey Tibbs' Wild West Show as a rodeo performer, under the name "Chips Warner," because crowds didn't like Indian names.

It was with Tibbs in Europe, at the World's Fair in Brussels in 1958, that he met the second love of his life: Josee Kesteman, a young Belgian actress.

"When she came into my life, my life changed again," Bald Eagle told the Rapid City Journal. "She was the one who kept me alive."

Their courtship spanned years and thousands of miles. And as described in a profile of one of the couple's sons, it featured a movie-worthy parting line:

"Before he left Belgium ... David told Josee that he had a cave in South Dakota waiting for her if she ever wanted to come live with him.

"All Josee could think about was that cave in South Dakota ... she decided to leave Brussels behind in 1972."

The cave comment was a joke, Bald Eagle later explained, but Josee seemed totally game for the plan. The two married the next year, and instead of a cave, they lived on a horse ranch on the Cheyenne River Reservation.

They raised a large family together, one that grew even larger when they adopted many children. Several of their children have served in the military, including two who served in the 82nd Airborne, like their father.

At times 20 to 30 people would be living at the ranch at a time, says Bald Eagle's son, Kili Bald Eagle.

"We had teepees that were always set up in the back yard and we grew our own, so we had food always available," he says. "If you came to the Bald Eagle Ranch you were going to earn your keep, but you were always welcome."

After settling down, Bald Eagle became the chief of the Miniconjou Lakota. Then he became First Chief of the United Native Nations, an organization representing a number of tribes.

Chief Bald Eagle had extraordinary exploits and adventures, but Skyhawk says his greatest attribute was something quieter: his "silent compassion."

"He loved children, he loved teaching, he loved educating people — he loved it all. He loved life to its extreme," Skyhawk says. "No matter who you were, child, man, woman, he made you feel special. And that is a huge, huge mark on the telling of who you are as a human being, and he exemplified that."

"I know we can't go back there, back to where we were," he told the Rapid City Journal in 2003. But we can tell the young ones how it was and they can remember, and they can bring it back. They can return."

He was always adventurous.

"He rode his last bucking horse when he was 72 years old, on a dare," Kili Bald Eagle says. "That's my dad."

He kept acting, too. There was that appearance in Dances with Wolves, after all. For decades, The Associated Press writes, Bald Eagle was the face of the Lakota in tourism ads for South Dakota.

And at the age of 95, he had his first lead role, after all those years as a stunt double: He starred in the independent film Neither Wolf Nor Dog.

He threw his heart into the role, director Steven Lewis Simpson said. At a key point in the plot, he improvised — speaking off the cuff about the massacre at Wounded Knee and how it affected his people.

"At that point he's not acting — he is just literally a great Lakota elder sharing with us the historical trauma of his people," Simpson says.

"He was an extraordinary human being," Simpson says, pointing to Bald Eagle's mischievous humor and his fearlessness. "His biography is filled with things that would have killed lesser men."

He says Bald Eagle would reminisce about his days with Casey Tibbs and his time on the rodeo circuit, but that he was most proud of his family with Josee. They'd host huge family gatherings at their ranch, Simpson says.

Even in his late 90s, David Beautiful Bald Eagle was every bit the active head of the family.

"The funny thing is that normally when a 97-year-old passes you go, 'Well, they had an incredible long life.' You kind of think it's the end of it," Simpson said. "And yet in a strange way with Dave ... You just didn't feel there was an end to him."

Skyhawk, too, says it's hard to believe that Bald Eagle is gone — and nearly impossible to find the words to describe him.

"He was a short man in stature but he was immeasurable in what he has done for his fellow man and for his native people," Skyhawk says.

"If I had to describe, him I'd say tatanka, which is the Lakota word for buffalo. And the male buffalo in the course of a storm, a blizzard, will stand there and face it head-on. He won't lie down and he won't hide behind anything. That's what this man did: he faced everything with integrity and everything that he had in his own heart.

"And it would have taken a big heart."

A caption with a photo of Chief David Beautiful Bald Eagle previously misidentified the Days of '76 Museum in Deadwood, S.D., as the Days of '74 Museum.