Accessibility links
Overworked, Underfunded Missouri Public Defender Office Assigns Case — To The Governor : The Two-Way Gov. Jay Nixon has denied funding increases and vetoed caseload caps for the state's badly overloaded public defender system. So the director is calling him in to help out with the backlog. 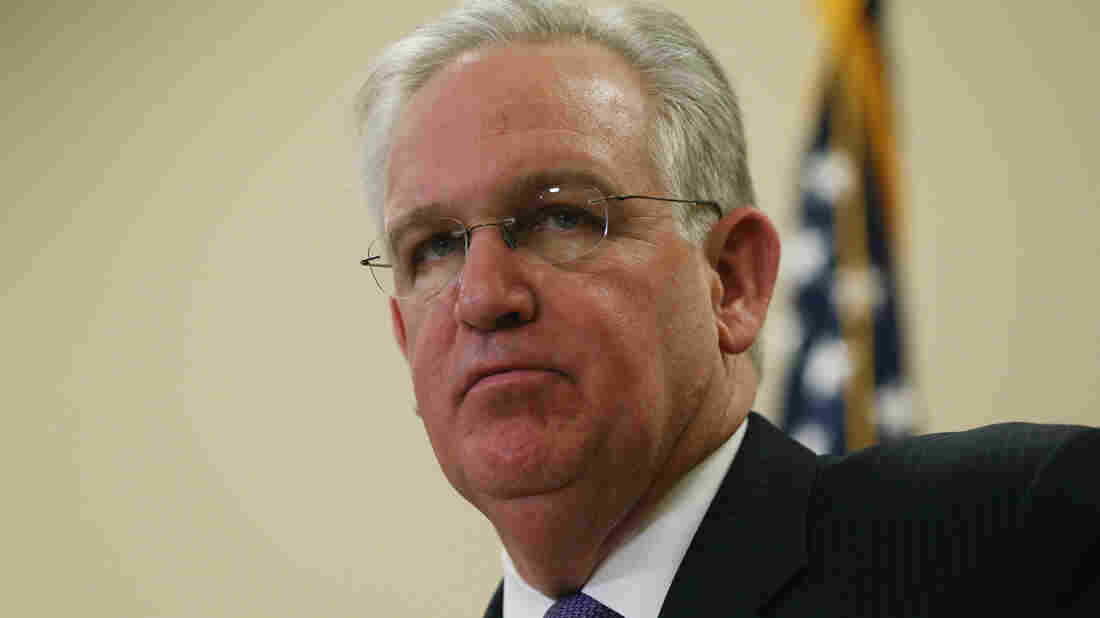 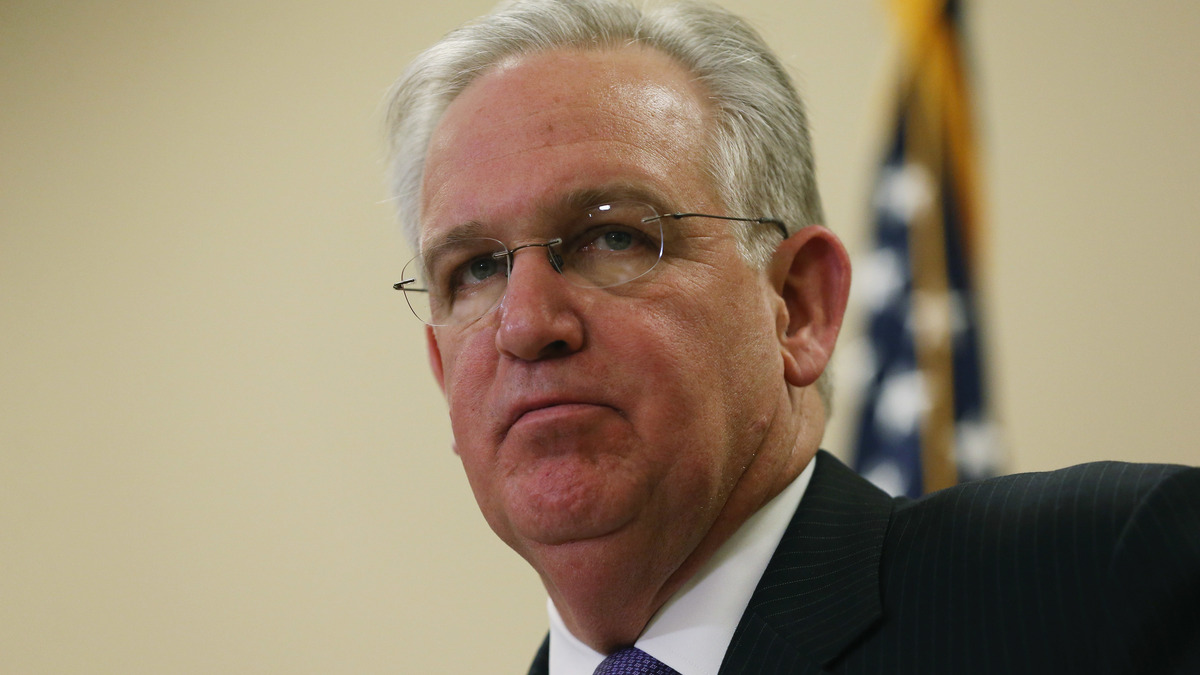 Missouri Gov. Jay Nixon speaks to the media in November 2014.

The public defenders office in Missouri says it's been overloaded for years: too many cases, too few attorneys, too little funding.

But Gov. Jay Nixon, who was previously the state's attorney general, has vetoed potential caseload caps and repeatedly blocked funding.

The director of the public defender system is frustrated — so frustrated he's implementing a state provision allowing him to draft any lawyer in Missouri to take over a case.

And he has one lawyer in mind: Jay Nixon.

Michael Barrett notified the governor in a letter Tuesday, opening with a walk down memory lane:

"Seven years ago, your office vetoed Senate Committee Substitute for Senate Bill No. 37, which would have provided caseload relief to an overburdened public defender system. In denying that relief, you acknowledged that MSPD was operating 'under significant stresses' and committed to working with the General Assembly to fix the problem, but never did.

"Instead, you have repeatedly cut funding for an indigent defense system that continues to rank 49th in the U.S. [in terms of funding]."

For several years in a row, the Legislature has approved multimillion-dollar budget increases for the public defender system, which the Democratic governor has rejected. The additional money would have helped hire more lawyers; a 2014 study found that Missouri needed an additional 270 public defenders in order to adequately represent the state's poorest defendants.

It's gotten even worse since then, Barrett told the St. Louis Post-Dispatch. He says he has fewer lawyers because he can't afford to replace those who leave for the private sector, and the system's total caseload has gone up 12 percent in the last year. Each of his lawyers, he says, has to handle more than 100 cases at a time — in some cases, more than 200.

"I can only hire attorneys when I have the funding to do so," Barrett wrote in his letter to the governor. But he does have another option — the ability to delegate duties to "any member of the state bar of Missouri."

Barrett says he hasn't used that power because "it is my sincere belief that it is wrong" to force private lawyers, who aren't responsible for his budget crisis, to pick up the obligation of the state.

"However, given the extraordinary circumstances that compel me to entertain any and all avenues for relief, it strikes me that I should begin with the one attorney in the state who not only created this problem, but is in a unique position to address it," he writes.

And with that, he appointed Nixon to a case.

The governor has been assigned to defend a man accused of assault, The Washington Post reports.

Barrett, who has also sued the governor over the funding restrictions, told the Post that his unusual move was necessary to raise awareness of the "reprehensible" lack of funding.

"Gov. Nixon has always supported indigent criminal defendants having legal representation. That is why under his administration the state public defender has seen a 15 percent increase in funding at the same time that other state agencies have had to tighten their belts and full-time state employment has been reduced by 5,100. That being said, it is well established that the public defender does not have the legal authority to appoint private counsel.

"Under Section 600.064 of Missouri law, only the circuit court can appoint a private attorney to represent an indigent criminal defendant. Section 600.042.5, the statute referenced by the public defender, authorizes the public defender to "delegate" representation by contracting with private counsel, which requires the consent of the private attorney."

For years, alarms have been sounding about the woes of Missouri's public defender system. There are far too many cases assigned to each defender, according to the system and to outside observers.

In 2009, a report said the office's caseload burden was "a crisis so serious it has pushed the entire criminal justice system in Missouri to the brink of collapse."

Facing an untenable workload, public defenders "are often weary, both physically and, as some have described, spiritually. They work so hard for so little, and yet they are often embarrassed by the work they manage to do," the analysts found. "A dedication to justice cannot create more hours in the day."

"The severity of this crisis has been forecasted for years, by those closest to it, but next to nothing has been done. And now the situation is as urgent as it is dire," the report stated.

Six years later, in 2015, the St. Louis Post-Dispatch wrote at length about the still-dire condition of the system.

According to one study, the newspaper wrote, "public defenders were spending an average of 27.3 hours less than deemed sufficient to provide reasonably effective counsel in various cases. For example, the study determined attorneys should expect to spend about 63.8 hours on a sex-related felony. Missouri public defenders spent an average of 25.6 hours."

Turnover and burnout is said to be high, and not helped by the salaries Missouri offers. Last year, the average salary for a three-year veteran public defender in Missouri was $50,341, the newspaper reports. In Iowa, a three-year veteran would, on average, make more than $65,000 — and have a smaller caseload.

Meanwhile, the number of cases is increasing — even though the state has "one of the strictest eligibility guidelines in the country," the Post-Dispatch wrote. "Missouri guidelines match the federal poverty guidelines, meaning an individual with a salary of $11,000 a year would not be considered poor enough to receive a public defender.

"Put another way, a person could qualify for food stamps but not legal representation in Missouri."

Last year, the U.S. Department of Justice found that the constitutional rights of poor black children in St. Louis County were being violated, in part because of the overloading of the public defender system. The DOJ described one defender's caseload as "staggering," and the challenges facing the system as "extraordinary."

Barrett and previous leaders of the public defenders office have said, again and again, that they can't adequately represent so many people with so few staff, and can't hire more lawyers without funding. The result, they say, is the violation of the civil rights of the people they are trying to serve.

J. Marty Robinson, then the director of the public defenders' office, once told the Missouri Bar's magazine that the funding problem has been festering for a long, long time: