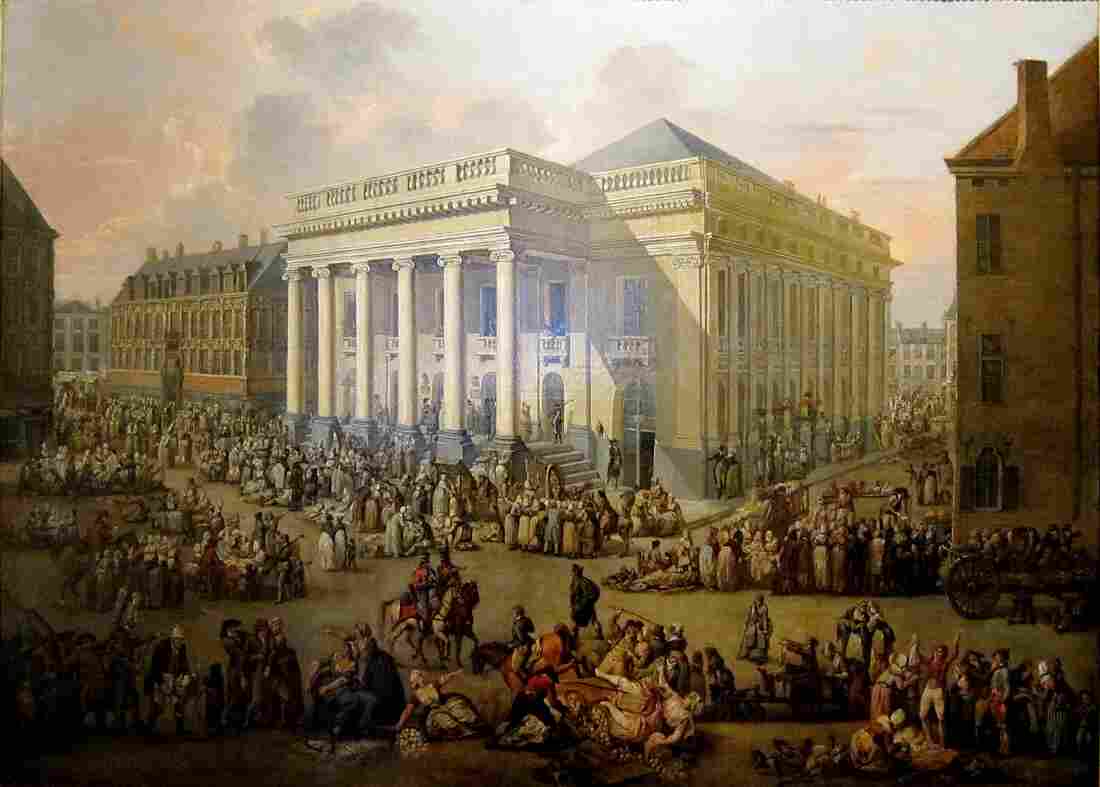 La Braderie, by François Watteau (known as Watteau of Lille) shows vendors, buyers and a bit of chaos at a Braderie in the late 19th century. Wikimedia hide caption 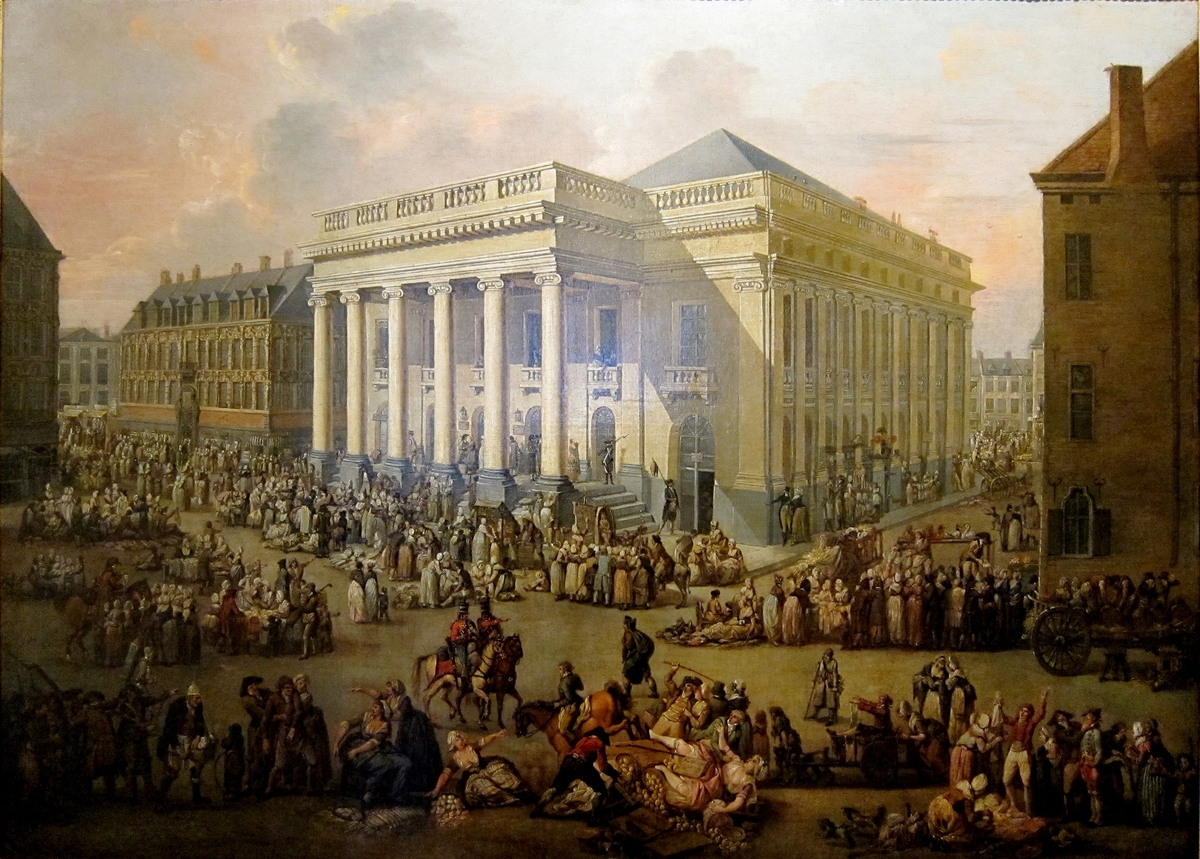 La Braderie, by François Watteau (known as Watteau of Lille) shows vendors, buyers and a bit of chaos at a Braderie in the late 19th century.

For centuries, the northern French town of Lille has been home to an autumn flea market — as famous for its party atmosphere as for its wealth of secondhand goods. Last year, more than 2 million people came to the weekend festival to gulp down oysters, drink all night and haggle over goods.

But La Braderie de Lille has been called off this year. After recent terrorist attacks in France, authorities say it is impossible to ensure security, NPR's Eleanor Beardsley reports.

"Lille Mayor Martine Aubrey said canceling La Braderie was a gut-wrenching decision, but the city could not guarantee the safety of the more than 2 million visitors who show up for the street fair," Eleanor reports. "The head of Lille's Chamber Of Commerce called the cancellation an economic and cultural disaster. 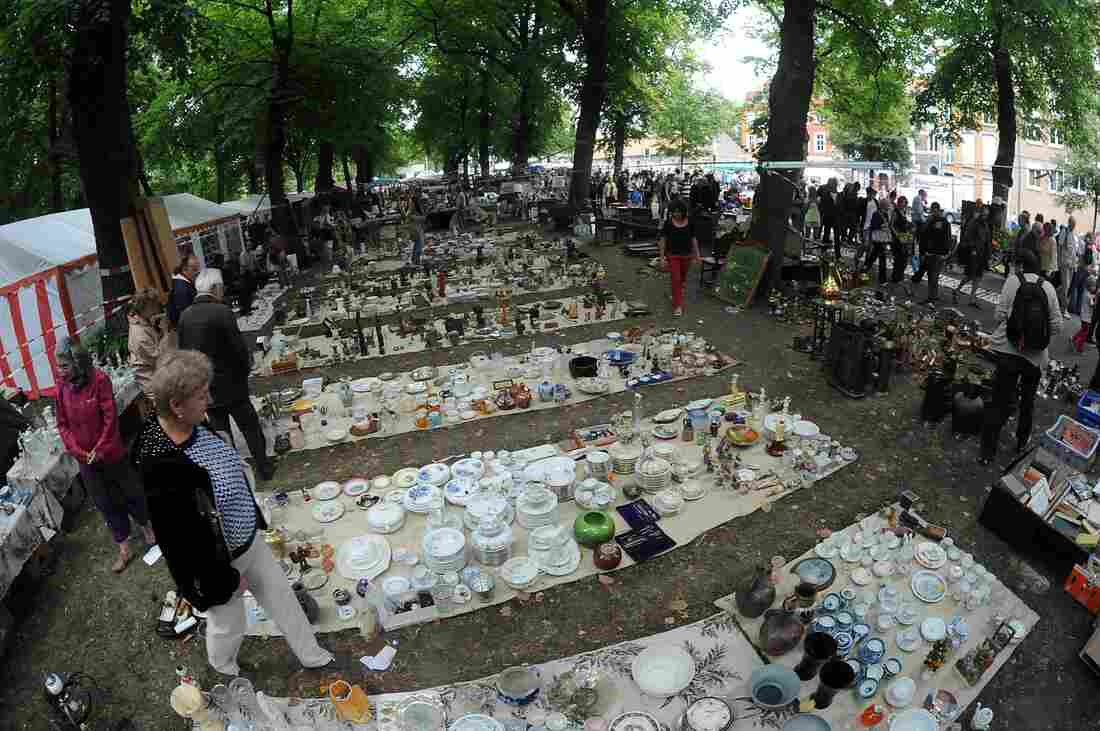 The Braderie de Lille, shown in 2013, is one of the largest flea market in Europe. It takes place on the first weekend of September every year — except this one. Antoine Antoniol/Getty Images hide caption 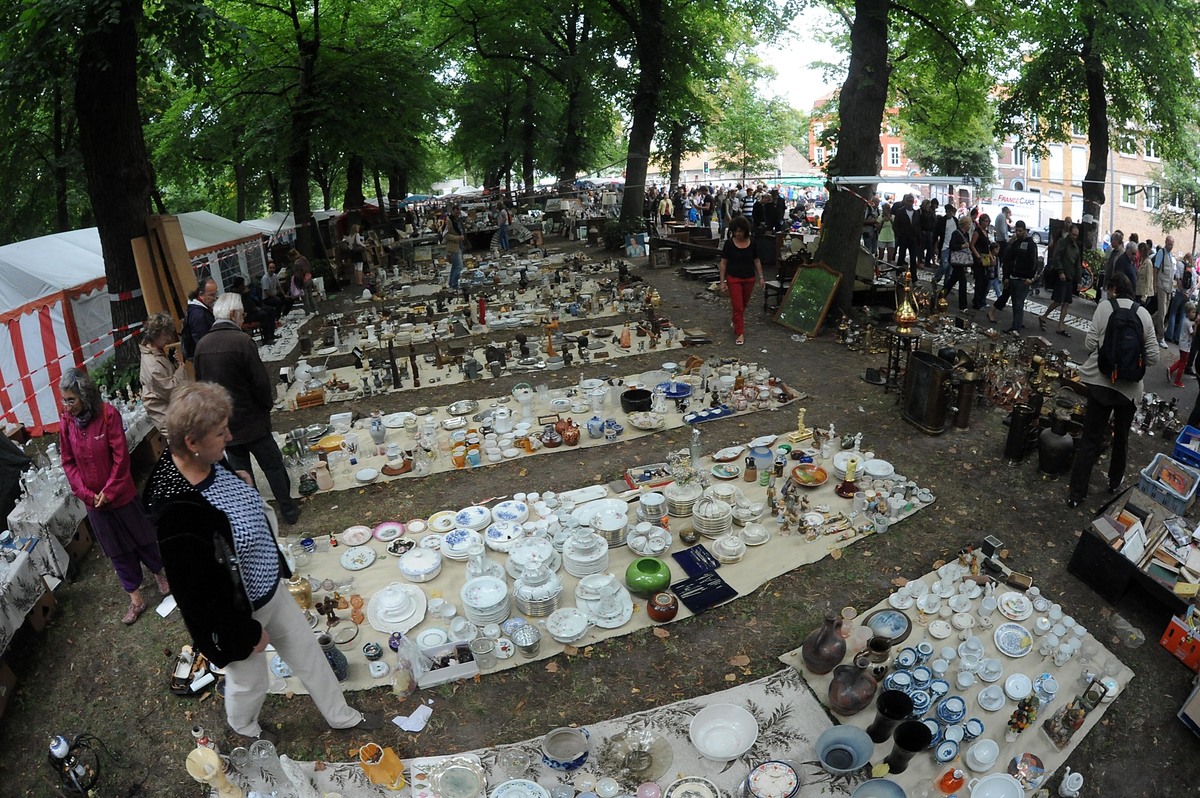 The Braderie de Lille, shown in 2013, is one of the largest flea market in Europe. It takes place on the first weekend of September every year — except this one.

"Summer festivals and outdoor events across France are being scaled back this year under the heightened terrorist threat," she says.

The fair was scheduled for September 5-6, starting on Saturday afternoon and going nonstop through the night.

La Braderie de Lille has evolved over its very long history. It reportedly began in the 12th century, according to the Braderie's website, and was dedicated to servants selling their masters' castoff goods. Eventually, it evolved into a larger gathering of sellers — and added a strong focus on moules-frites, or mussels and fries.

The fair was suspended during World War II, and was less exciting than usual during the post-war reconstruction, the fair says — but it roared back to life in the '70s.

Each year, the millions of visitors eat hundreds of tons of mussels. It's a competition for the local restaurants — they pile the empty shells outside their doors, showing off their success.

The weekend begins with a half-marathon, with thousands of runners. The flea market has 10,000 vendors, stretched out over 100 kilometers (more than 60 miles) of city street, according to Flea Market Insiders.

Fears of terrorism have surrounded the two-day, once-a-year flea market before. The risk was discussed in 1995, when France had been bombed by the Armed Islamic Group, as well as last year, La Voix du Nord reports.

Despite concerns, the fair has always gone ahead as planned — except for during the Nazi occupation of France, says Laurence Phillips, who has written several Lille travel guides.

La Voix du Nord dipped into its archives and found coverage of the market's cancellation during World War II — and its triumphant return afterward. Here's a translation, thanks to NPR's Ned Wharton and Mathilde Piard:

"During the six years of World War II, the city of Lille (which was occupied by the Germans for four years) gave up the Braderie. The city was liberated by the Allies on the weekend of September 2 and 3, 1944: it would be the last year without markets.

"In 1945 the Braderie rose from the ashes, and its comeback was documented by a journalist from La Voix du Nord:

" 'Oh, certainly, it wasn't the Braderie of years past, the nights weren't as full of true Flemish revelry and drinking parties like you'd see in a Teniers painting, no nocturnal throngs — still, the fair was going full swing until four in the morning, which is not that bad.'

"The journalist concluded, firmly convinced that the Braderie still had good days ahead: 'The tradition is not lost and we expect that the next Braderies will regain their former importance.' A note of hope that today has been fulfilled." 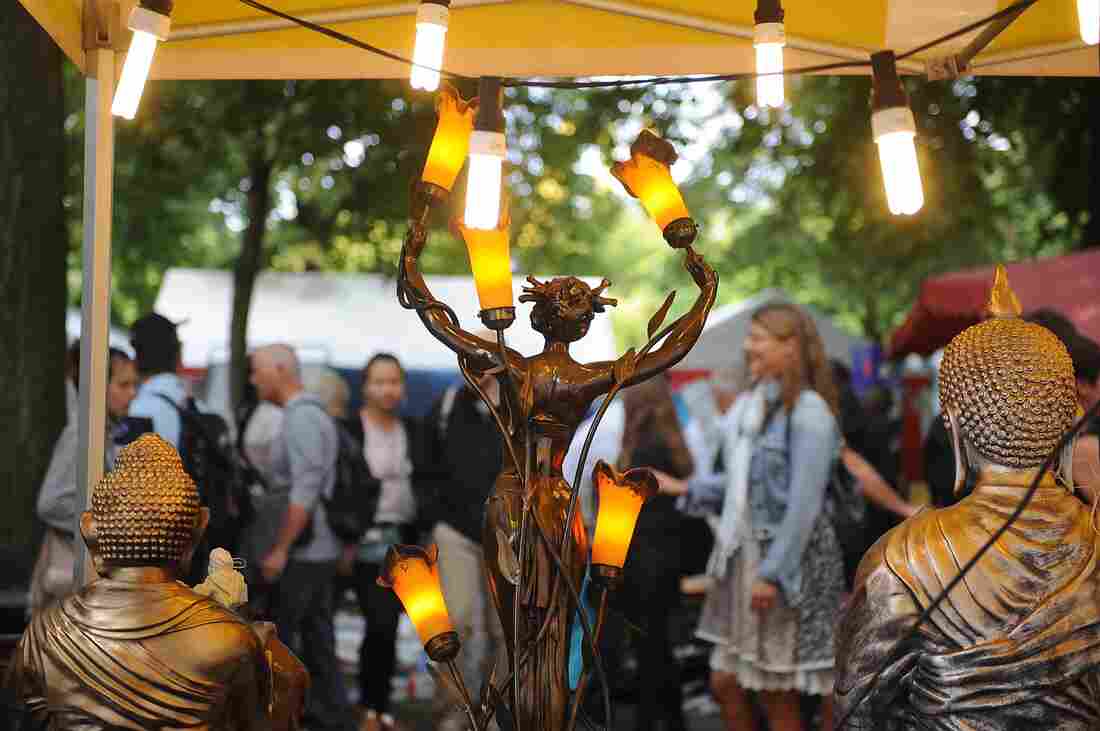 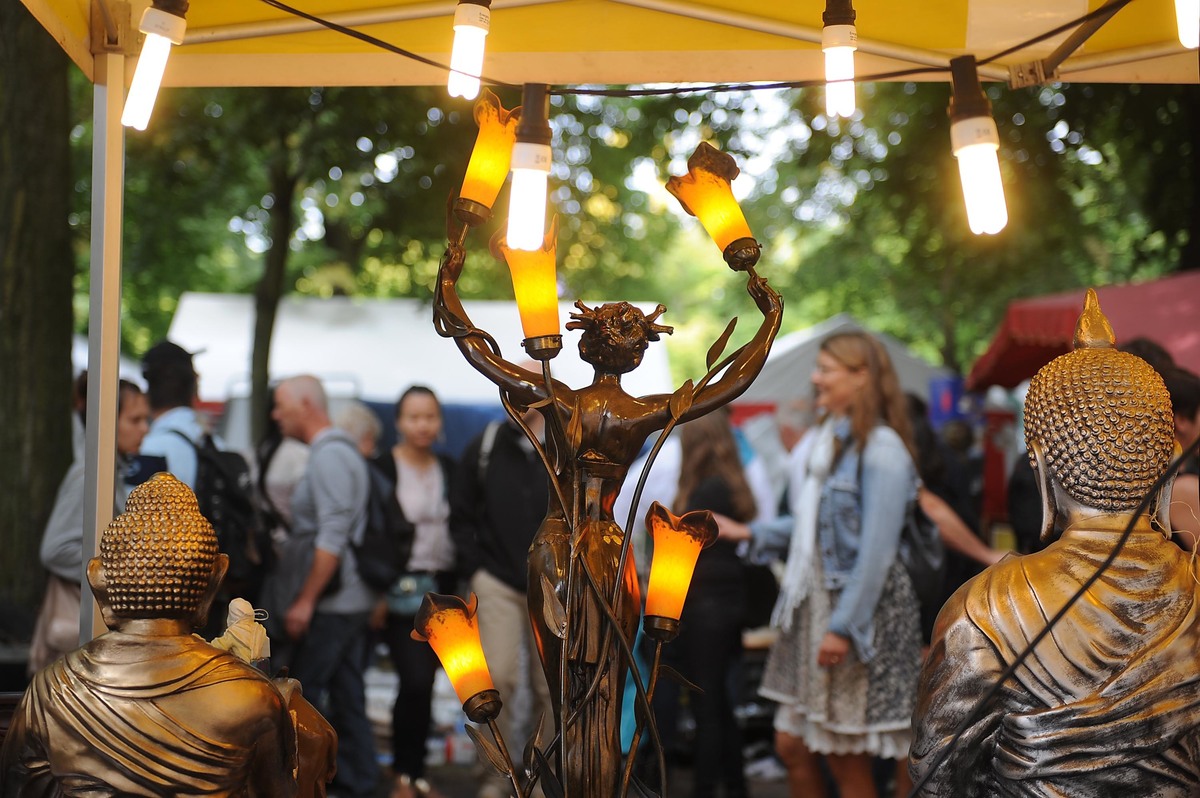 People look at items on sale during the annual Braderie de Lille in 2013.

Tradition or no, the mayor says that this year the risks were just too high.

"To have sharpshooters on roofs at the market, riot police on each street corner and helicopters and drones flying overhead would not be in the spirit of the market," Aubrey said, according to France24.

The Braderie is scheduled to return in 2017.