Accessibility links
Riots Follow Fatal Police Shooting In Milwaukee : The Two-Way Violence erupted and businesses were set ablaze after an officer shot and killed a 23-year-old man during a foot chase Saturday. Police say the man was fleeing a traffic stop and armed with a gun. 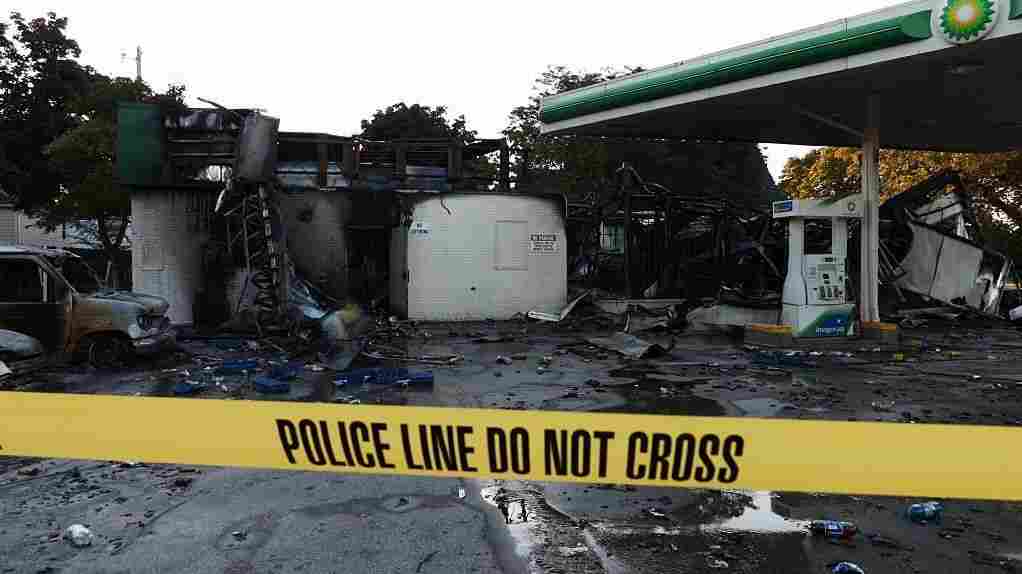 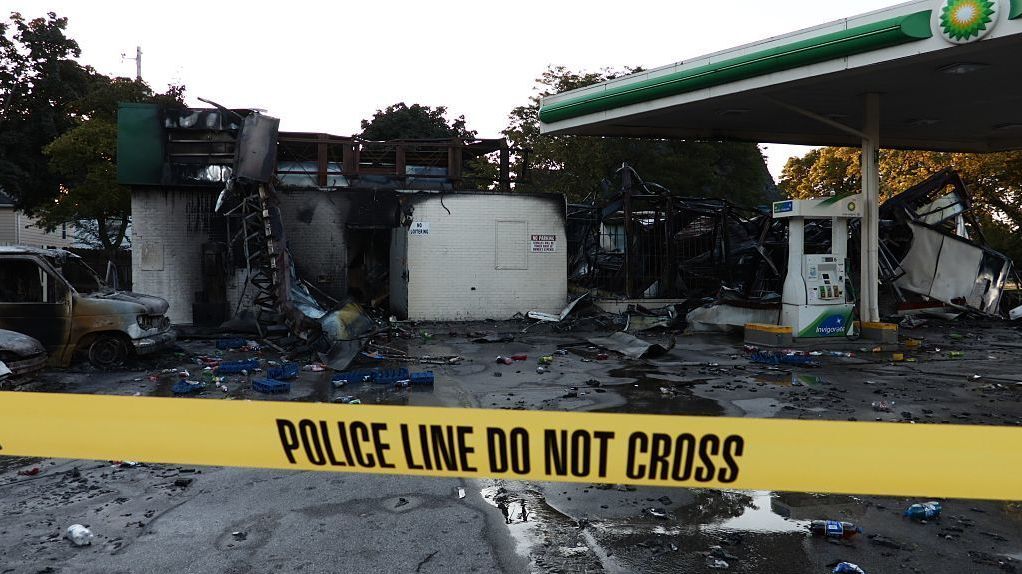 A damaged gas station after protesters set fire to several vehicles and businesses in Milwaukee.

Riots erupted in Milwaukee's north side late Saturday night, in the same neighborhood a police officer fatally shot a 23-year-old man earlier in the day.

Milwaukee police said in a statement that at approximately 3:30 p.m., two uniformed officers stopped two male occupants in a car, who proceeded to flee the scene on foot.

During the chase, a 24-year-old male officer shot and killed one of the men they described as a "suspect," who was armed with a semiautomatic handgun. He died as a result of his injuries at the scene. The entire episode took place within the 3200 block of N. 44th Street.

It's unclear if the man shot by the officer had aimed or attempted to fire his weapon at the 24-year-old male officer who stopped him, Milwaukee Police Assistant Chief Bill Jessup told reporters, adding that police have yet to interview the officer.

As NPR's Cheryl Corley told Weekend Edition Sunday, law enforcement officials said the man killed was armed with a stolen handgun loaded with 23 rounds of ammunition. Police said the gun was "taken in a burglary in Waukesha in March of this year."

The second male suspect, also 23, has been taken into custody, Jessup said.

Authorities did not immediately release the race or identity of the man shot by police. Police reported that the man has a "lengthy" arrest record, but did not say what led to the traffic stop.

Several hours after the deadly shooting, crowds of protesters smashed windows and torched a squad car and several businesses.

Gas station at Sherman and Burleigh set on fire. MFD cannot extinguish fire as gunshots are being fired.

A gas station was set on fire, but as Mayor Tom Barrett told reporters, "the firefighters did not go immediately to the gas station, because gun shots throughout this entire period were being fired in this area."

Police estimated that at least 200 people had gathered and gunshots were heard throughout the evening. One officer was injured by a thrown brick. 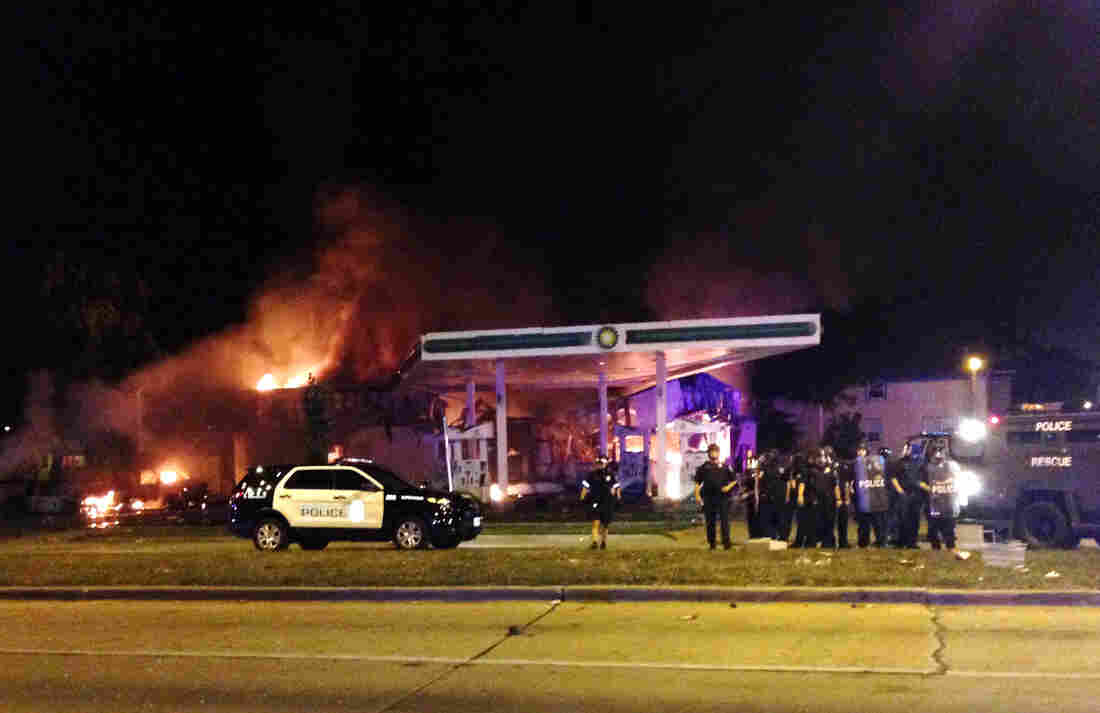 A crowd of protesters skirmished with police Saturday night in the Milwaukee neighborhood where an officer shot and killed a man after a traffic stop and foot chase earlier in the day, setting fire to a police car and torching a gas station. Gretchen Ehlke/AP hide caption 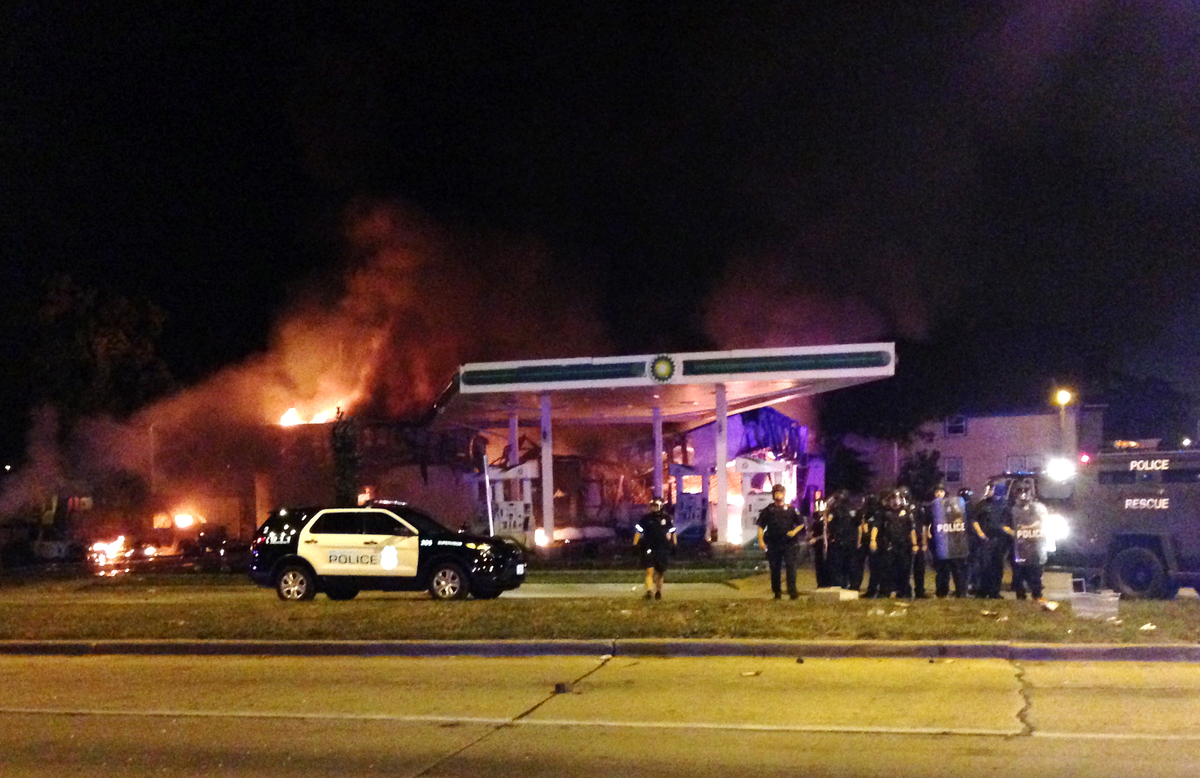 A crowd of protesters skirmished with police Saturday night in the Milwaukee neighborhood where an officer shot and killed a man after a traffic stop and foot chase earlier in the day, setting fire to a police car and torching a gas station.

In a news conference just after midnight Sunday, Barrett said the unrest seemed to be dissipating. At 12:20 a.m., police tweeted that they were restoring order to the area and were reducing deployments. He says city leaders are promising a full investigation into the shooting.

"Our police officers are doing everything they can to restore order," Mayor Barrett said, but implored the public to help restore calm.

The relationship between police and minority communities in Milwaukee has been "tense," Cheryl said "especially since a couple of years ago, a young man, Dontre Hamilton was shot by a white police officer 14 times." Here's more from Cheryl:

"That spurred massive protests that went on for months here, and now you have this shooting as well. And it's just been a rough time here, in the past few days there have been at least 5 people dying in shootings over a 9 hour stretch, and now this police shooting.

"And in this instance though, Milwaukee's mayor says he knows the neighborhood, he knows the residents want order, police at the press conference said they didn't think the protesters involved in the melee here were from the community. The mayor says there will be a strong police presence, and that this is not the Milwaukee he wants the country to see – but he wanted to make it plain what actually happened."