Accessibility links
PHOTOS: Welcome To The World's 'Highest And Longest' Glass-Bottomed Bridge : The Two-Way The bridge is elegantly stretched between two peaks in China, where visitors can gaze under their feet at the canyon — a vertigo-inducing 328 yards below.

PHOTOS: Welcome To The World's 'Highest And Longest' Glass-Bottomed Bridge

PHOTOS: Welcome To The World's 'Highest And Longest' Glass-Bottomed Bridge 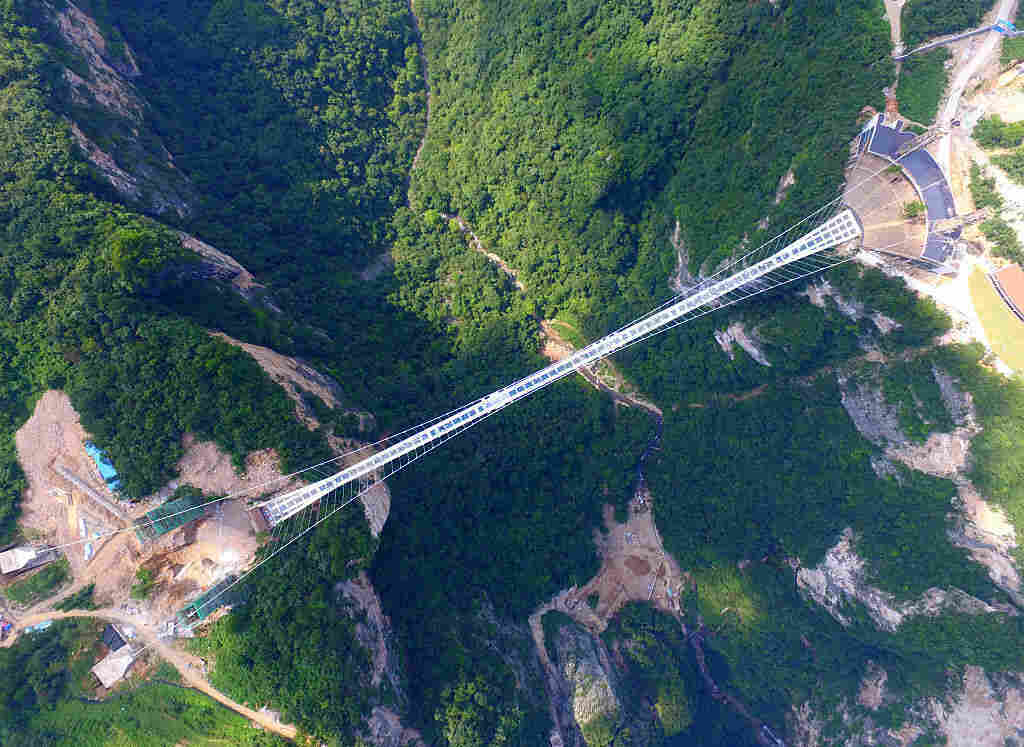 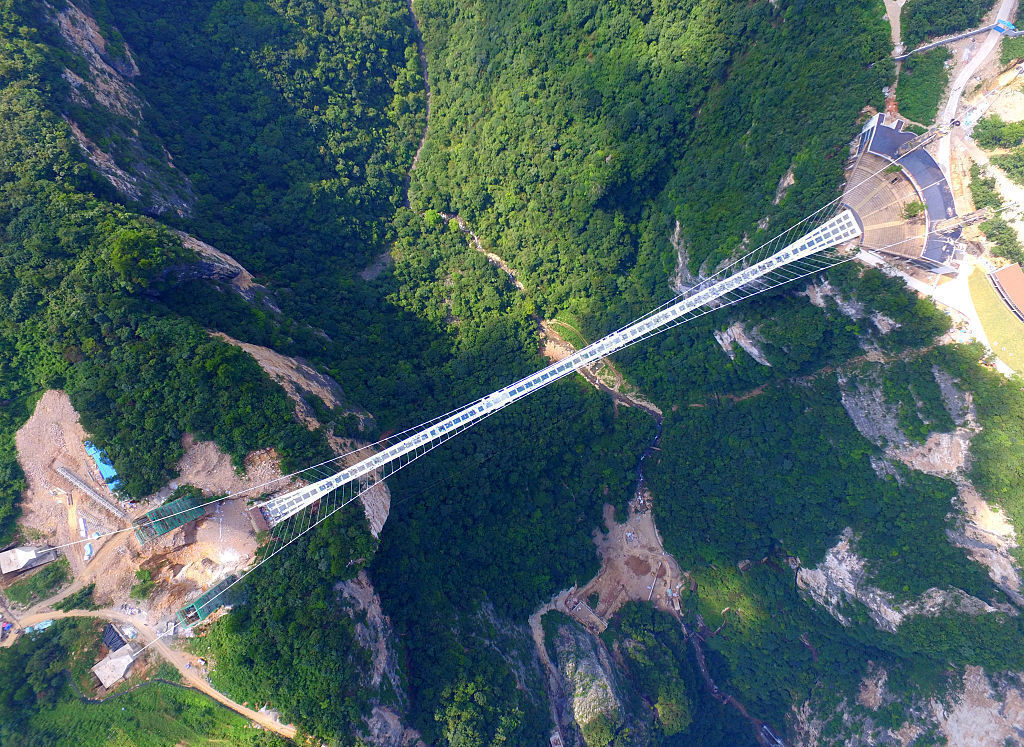 An aerial view of glass-bottom bridge at Zhangjiajie Grand Canyon on Saturday in China's Hunan province.

And as of this weekend, it's open to visitors. Now, one can walk the 470-yard length of the glass bridge, which is positioned a vertigo-inducing 328 yards above the ground, as China's state-run news agency Xinhua reported.

The bridge is located in the Zhangjiajie National Forest, where the otherworldly, plummeting mountain faces reportedly provided inspiration for the forest setting in the film Avatar. 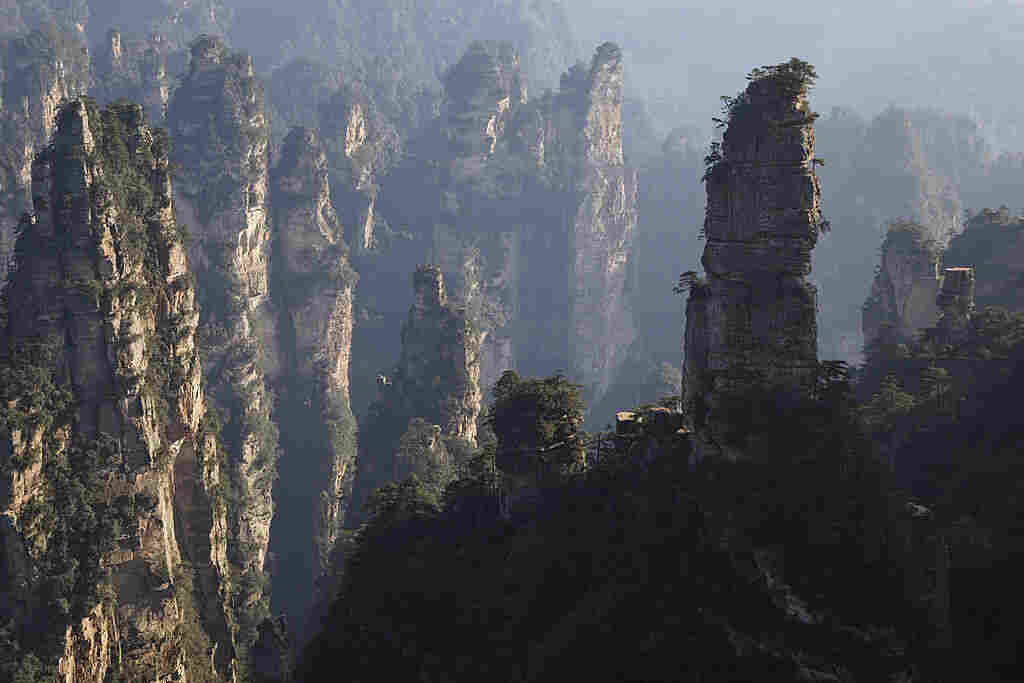 "I wanted to feel awe-inspired by this bridge. But I'm not afraid — it seems safe!" visitor Wang Min told Agence France Presse.

The bridge cost $3.4 million to construct and is "paved with 99 panes of three-layered transparent glass," according to Xinhua. Only 800 people are allowed on the structure at a time, the news agency added.

And cameras, selfie sticks and stilettos are not permitted on the bridge, as AFP reported.

It was designed by Israeli architect Haim Dotan, who told Wired that he initially rejected the project: "[The developer] asked me, 'What do you think about a bridge from here to there?' And I said, 'No.' ... He looked at me and said 'Why, what are you talking about?' And I said, 'Why do you want a bridge? It's too beautiful." 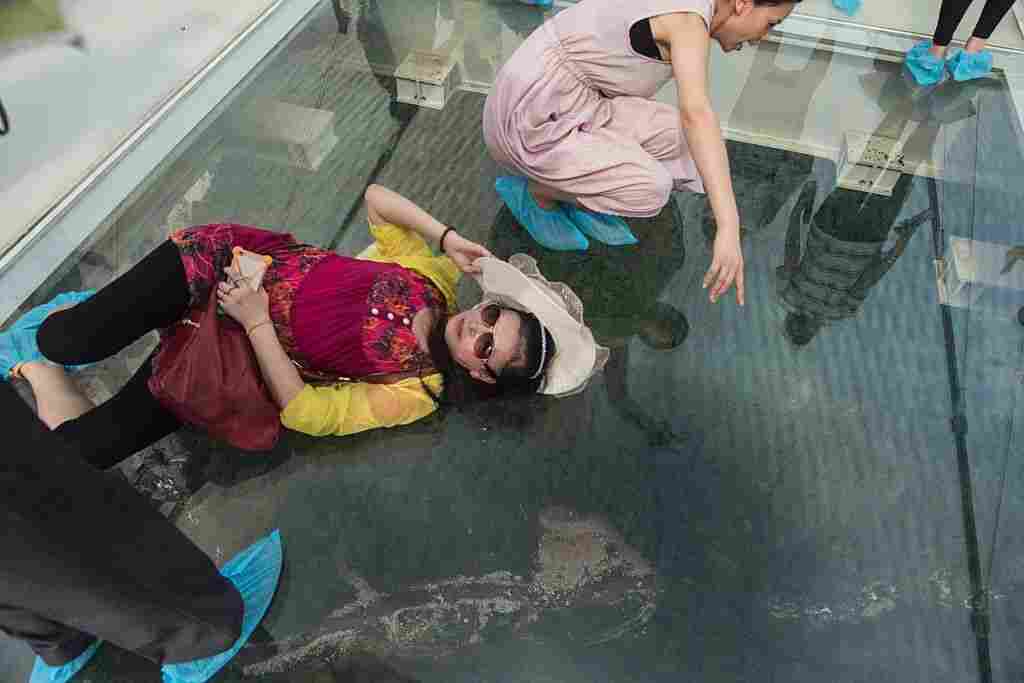 A tourist poses for a photograph on the glass-bottomed bridge above a valley in Zhangjiajie on Saturday. Fred Dufour/AFP/Getty Images hide caption

But after more pressure from the developer, he gave in, as Wired reported. "I told him, 'We can build a bridge but under one condition: I want the bridge to disappear.' "

The big question for many visitors is whether it's safe — especially after an "alarming glass bridge cracking incident at the Yuntai mountain in northern Henan in 2015," as AFP reported.

Prior to the Zhangjiajie opening, Chinese authorities tried to reassure visitors by holding highly publicized safety tests for the media. For example, participants were invited to bash in the glass panels with sledgehammers. In one such demonstration, the BBC's Dan Simmons shatters the top layer of glass on the first swing, but fails to damage the lower layers after striking the panel a dozen times. 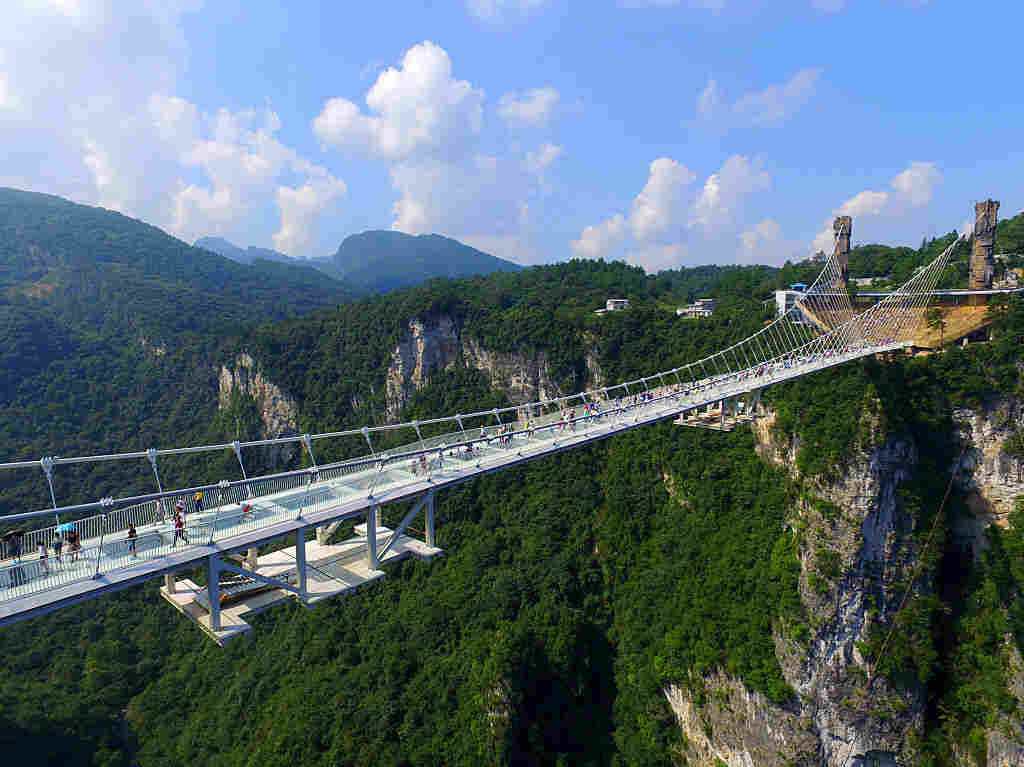 "Do you know what? I think this might be safe," Simmons said while laughing, winded from sledgehammering. Authorities also held an event where they drove a car over the bridge. 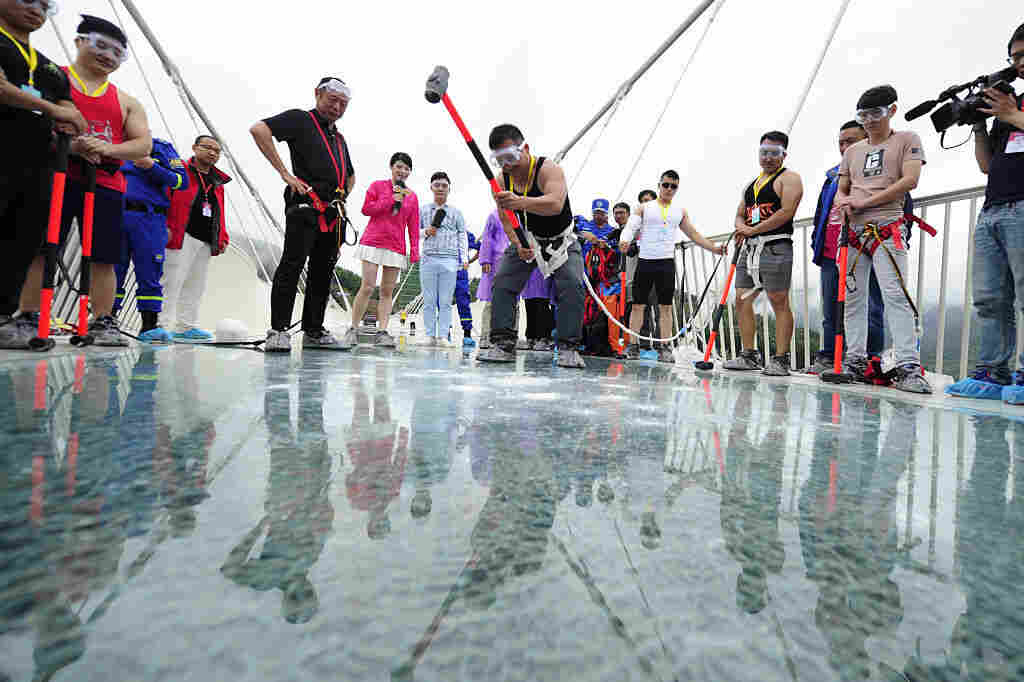 A visitor strikes the glass-bottomed bridge with a hammer for a safety test at Zhangjiajie Grand Canyon on June 25. Visual China Group via Getty Images hide caption

China has quite a penchant for glass-bottomed bridges and skywalks — and while officials say this is the longest, similar structures have been appearing around the country.

"Glass bridges in China have been a popular craze for the daring photo opportunities they provide," the BBC reported. "Events like mass yoga displays and even weddings have been staged on several such bridges." 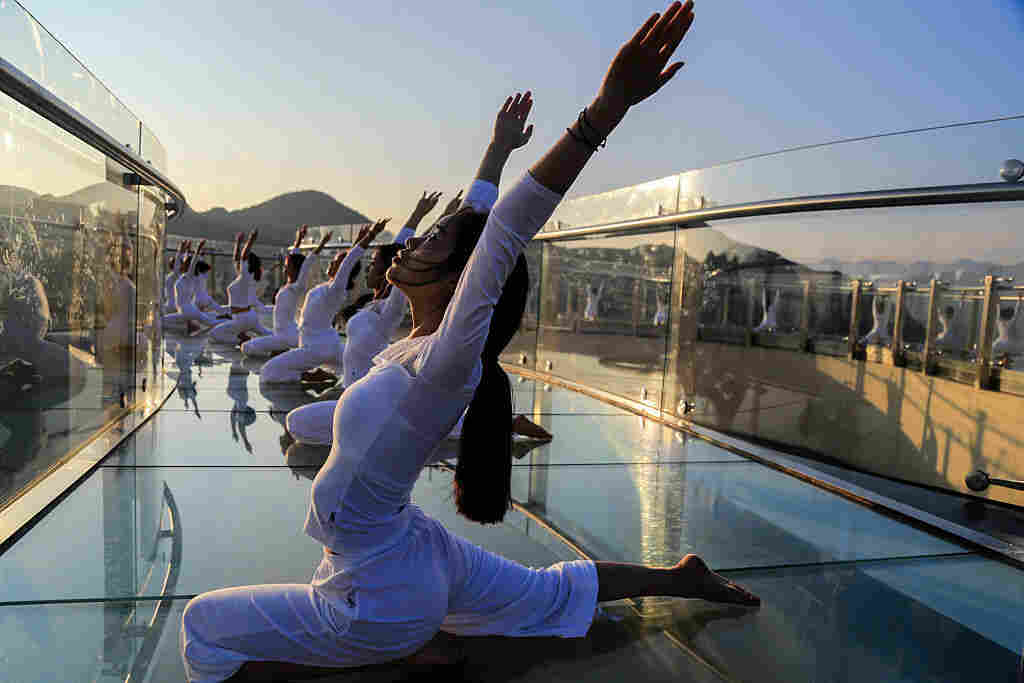 One example: Fifty women practice yoga on the skywalk at the Longgang National Geological Park in July in Chongqing, China. VCG via Getty Images hide caption

Architect Keith Brownlie told the BBC that it's all about the "thrill."

"It is the relationship between emotionally driven fear and the logical understanding of safety," Brownlie said. "These structures tread the boundary between those two contrasting senses, and people like to challenge their rational mind in relation to their irrational fear."