Accessibility links
Suicide Bombing At Turkish Wedding Pinned On ISIS : The Two-Way No group has claimed responsibility for the attack that killed at least 54 people, but Turkish officials say the device used suggests the Islamic State. 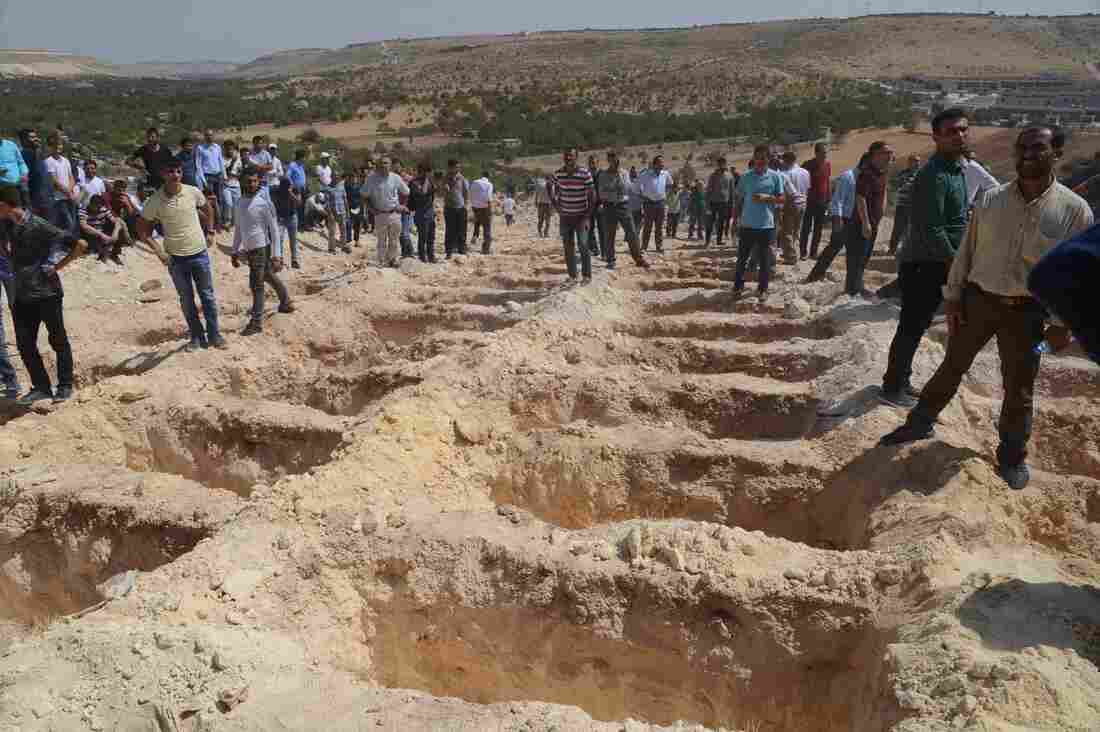 People wait close to empty graves at a cemetery on Sunday, during the funeral for the victims of a suicide attack on a wedding party in Gaziantep, Turkey. At least 50 people were killed when a suspected suicide bomber linked to Islamic State jihadists attacked a wedding thronged with guests, officials say. Ilyas Akengin/AFP/Getty Images hide caption 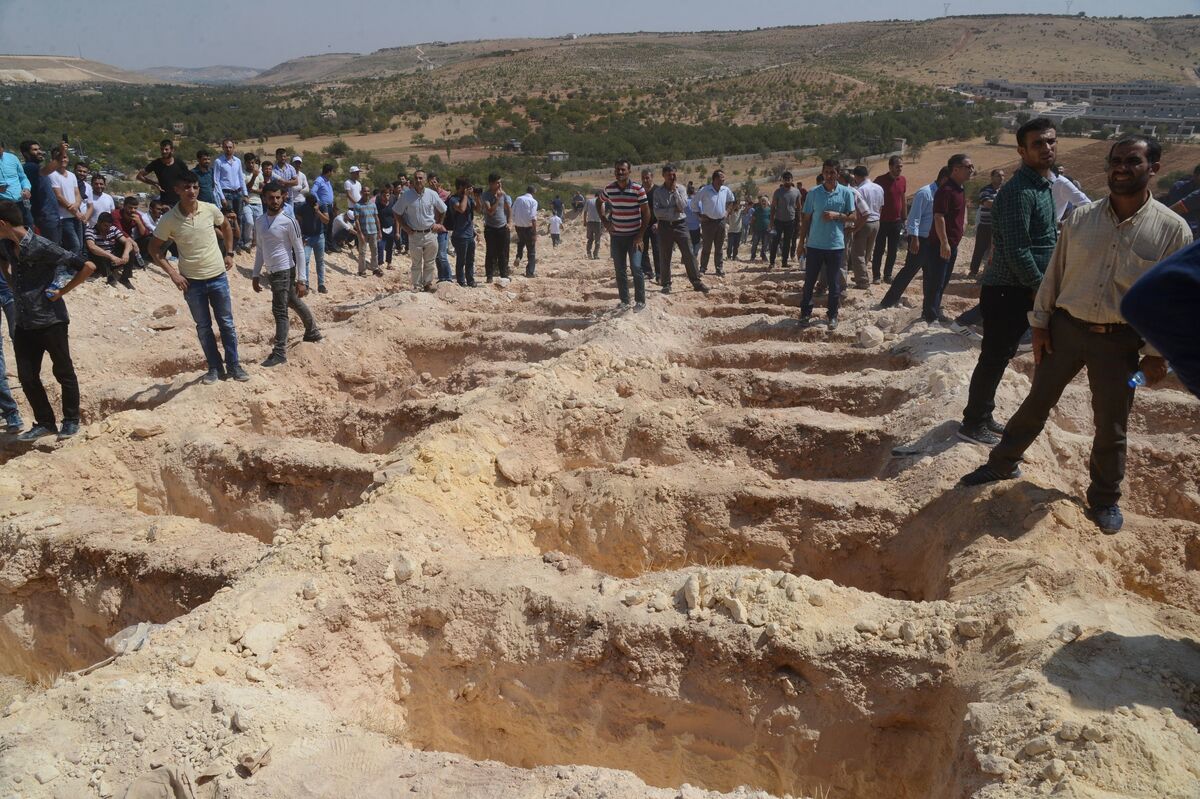 People wait close to empty graves at a cemetery on Sunday, during the funeral for the victims of a suicide attack on a wedding party in Gaziantep, Turkey. At least 50 people were killed when a suspected suicide bomber linked to Islamic State jihadists attacked a wedding thronged with guests, officials say.

A devastating suicide attack on a wedding in Turkey appears to have been orchestrated by the Islamic State, Turkish officials say.

The bombing in Gaziantep killed at least 54 people, according to local officials, and injured at least 66 more. Fourteen of the wounded are said to be critically injured.

At least 22 of the victims were children.

On Sunday, President Recep Tayyip Erdogan said the suicide bomber who carried out the attack was between 12 and 14 years old. On Monday, the Associated Press reported that the Turkish government was walking back that statement, and now says it's not clear what age the attacker was.

The bride and groom are believed to have survived the attack, NPR's Peter Kenyon reports.

"As I can tell it's never happened here," he says. "ISIS has used child bombers before; there's a monitoring group in the U.K. called the Syrian Observatory for Human Rights, and they say ISIS used 18 child bombers in 2015. There have been reports of cases in Nigeria and Afghanistan as well."

But for Turkey, he says, such an attack would be a first.

The bombing is the deadliest terrorist attack in Turkey so far this year — and it has already been a brutal year. The country has suffered attacks on transportation hubs, police stations and tourist destinations. Just days ago, three separate bombings hit across the country in one day. 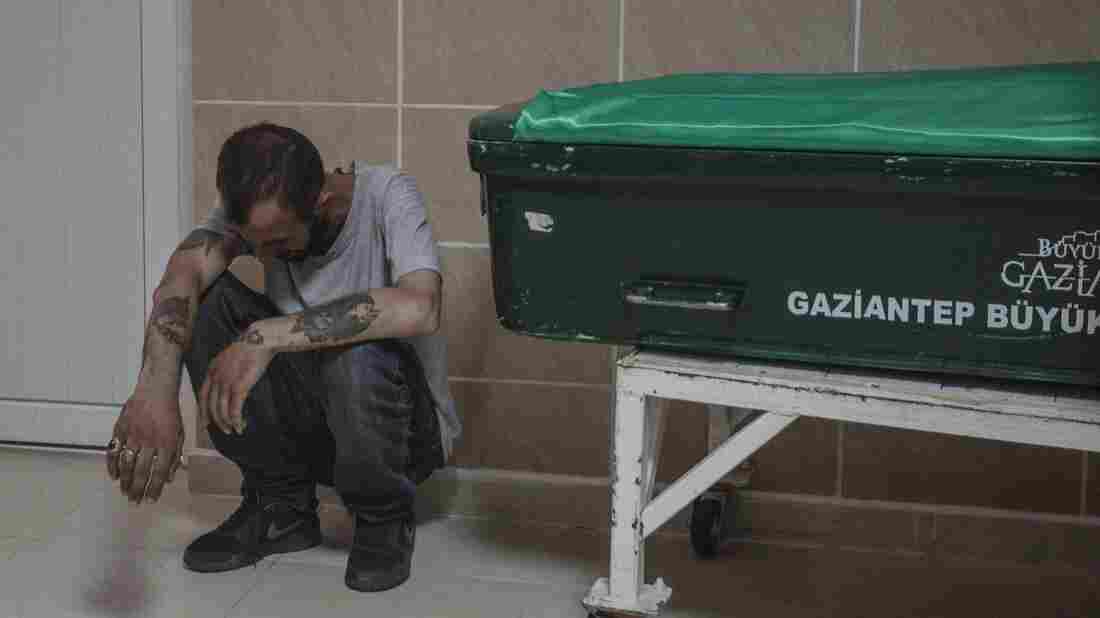 On Sunday, a man reacts next to the coffin of a victim from Saturday's attack on a wedding party that left more than 50 dead in Gaziantep in southeastern Turkey, near the Syrian border. Ahmed Deep/AFP/Getty Images hide caption 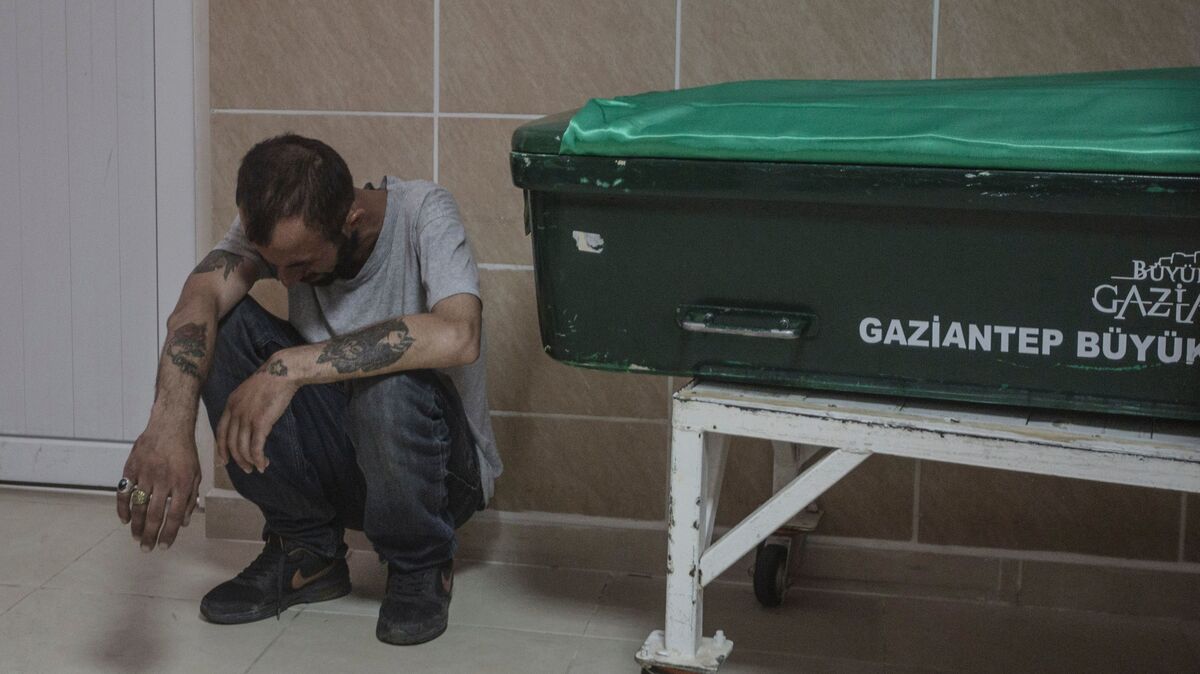 On Sunday, a man reacts next to the coffin of a victim from Saturday's attack on a wedding party that left more than 50 dead in Gaziantep in southeastern Turkey, near the Syrian border.

An attack on the Istanbul airport in June is believed to have been carried out by ISIS, but many of the other bombings were pinned on Kurdish militants with the Kurdistan Workers' Party, or PKK.

But Turkish officials believe the Islamic State was responsible for this weekend's bombing. "Since these victims were mainly Kurdish, the PKK probably wasn't behind it," Peter says.

There has been no official claim of responsibility by any organization, but President Recep Tayyip Erdogan says that police investigations point toward ISIS.

And on Monday, Reuters reported that the specific kind of device used in the attack also suggests ISIS involvement. The wire service reports:

"The device ... was the same type used in 2015 attacks on a peace rally in Ankara and on the border district of Suruc, a senior security official said on Monday.

"Both the Ankara and Suruc attacks were blamed on Islamic State, reinforcing the suspicion that the militant group was also behind the Gaziantep bombing on Saturday evening, the official said."

An ISIS attack on Kurds in Turkey might be motivated by events in Syria, Peter reports.

"One possible explanation is that ISIS is upset about Kurdish military victories in northern Syria because it's the Kurdish fighters who are really leading the charge there against the ISIS fighters," he says. "So some are saying this could be revenge taken against Kurdish civilians — who have nothing to do with it, obviously — inside Turkey for Kurdish battlefield gains in Syria."

At the same time, the attack sends a signal to Turkey in general that ISIS is capable of striking against civilians, Peter says.

The pro-Kurdish political party HDP also suggested that the attack could have been meant to exacerbate tensions between Kurds and the Turkish government, The Associated Press reports.

"[HDP] said in a statement that it was 'quite significant' that the attack, which it also blamed on IS, came hours after the Kurdistan Communities Union, a militant organization that includes the PKK, announced plans to try to negotiate to end a three-decade conflict between Kurdish militants and the Turkish government," the AP writes.

The attack has been condemned around the world. Russian President Vladimir Putin expressed his condolences; Russia and Turkey have had a tense relationship for the past few months, but have recently indicated a willingness to mend fences.

German Chancellor Angela Merkel called the attack "cowardly and perfidious," the AP reports, while the U.S. ambassador to Turkey condemned it as "barbaric."