Accessibility links
Peter Doig Says Painting Of Desert Landscape Isn't His; Judge Agrees : The Two-Way A retired corrections officer says he bought the painting from Doig in 1976, but Doig (now a famous artist) says that wasn't him. So the retiree lawyered up and went to court. 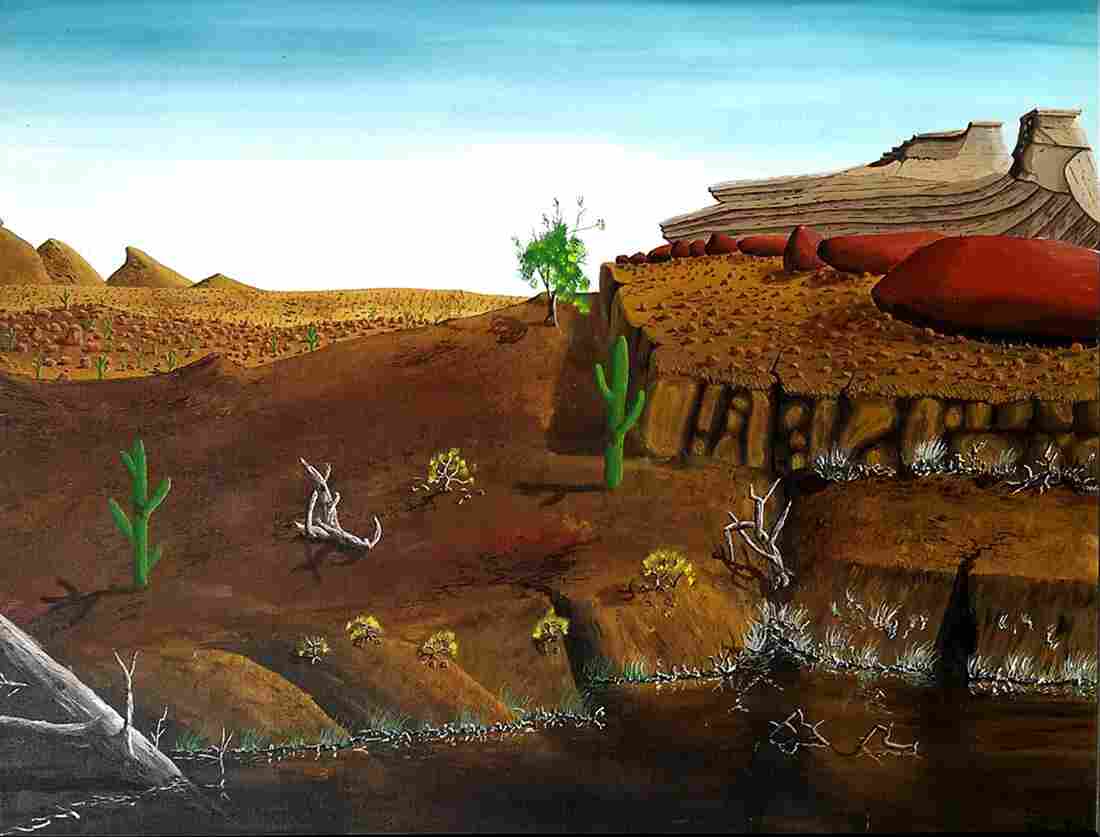 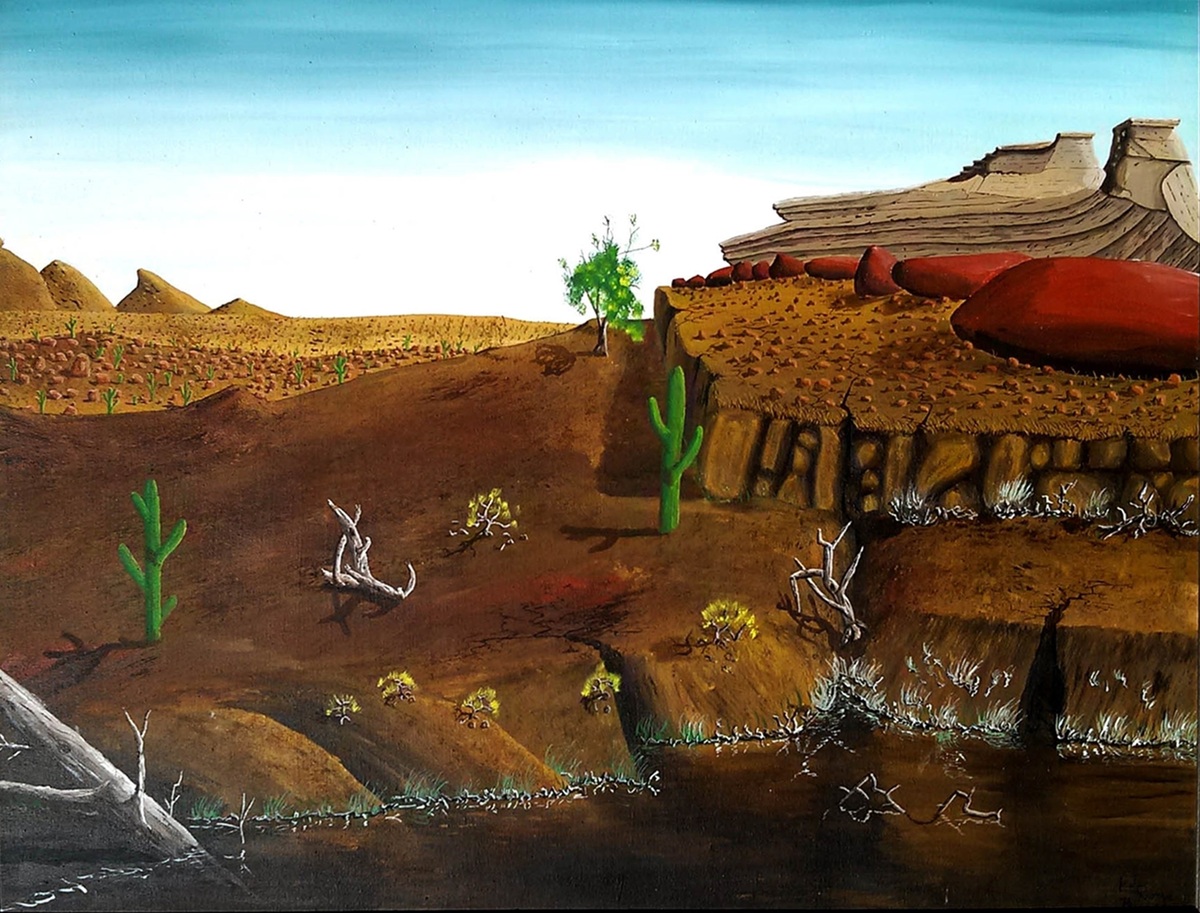 Updated at 6 p.m. with judge's ruling

Usually when there's a question about who created a piece of art, the artist is dead and can't speak for himself — he can't say, "Hey, I made that," or "Nope, not mine." But this is a story about a living artist who went to court to prove that a painting in fact is not his. And on Tuesday, a judge in Chicago agreed.

The painting in question is a desert landscape. There's blue sky at the top, red rocks and green cacti. It's owned by Robert Fletcher, a 62-year-old former corrections officer living in the Canadian city of Sault Ste. Marie. Here's how Fletcher says he got the painting: In 1976, he was working in Ontario's Thunder Bay Correctional Centre when he hit it off with an inmate named Peter Doige, who was in for LSD possession. Doige was going through some rough times, but he had this painting he had made in art class.

"I said, 'That painting you did inside, that desert scene, I absolutely love it,' " Fletcher remembers. "He said, 'Would you give me $100 for it?' " Fletcher said yes.

A couple of decades later, a buddy of Fletcher's is over at his house and sees the painting. He tells Fletcher that it's by a famous artist — Peter Doig. They look him up online and Fletcher recognizes him. "We watched some videos online of him being interviewed and the first thing I remember noticing is his body language — you know, some facial expressions and his use of his hands," Fletcher says.

Peter Doig is a pretty famous artist — last year, one of his paintings sold at auction for nearly $26 million. So Fletcher tried to sell his painting. That's when representatives for Doig came back and said the painting wasn't a Doig. Not only that, but Peter Doig doesn't know Robert Fletcher. And while he did do LSD in the '70s, Doig's representatives say he was never in jail.

For most people, that would be the end of it, but Fletcher and the owner of the gallery he hired to sell the painting were so convinced it was a Doig that they lawyered up and went to court. 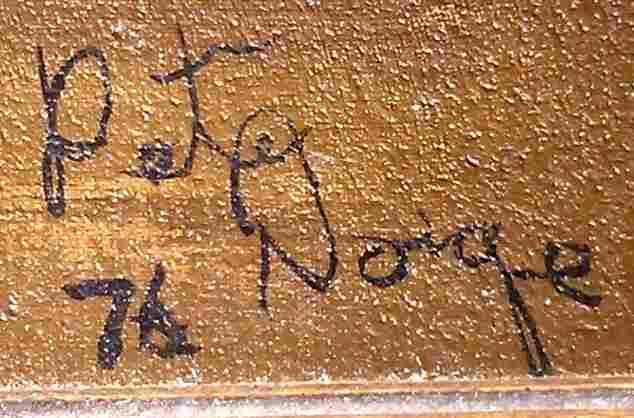 The signature on the painting in question spells Doige with an e. Bartlow Gallery LTD hide caption 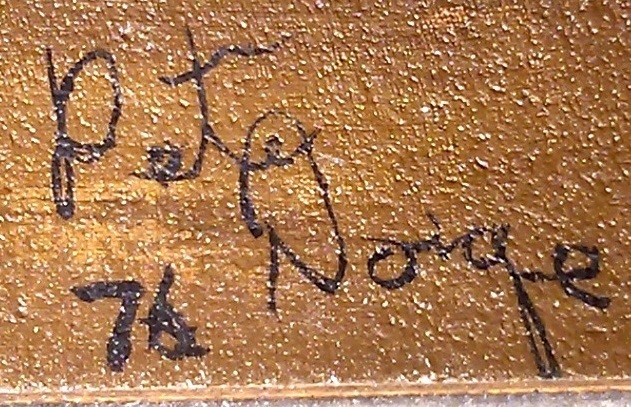 The signature on the painting in question spells Doige with an e.

Sergio Muñoz Sarmiento has worked in art law for over a decade. He says, "It's odd in the sense that this is the first time that I'm aware of that an artist is being asked to testify that a work of art was not made by him. ... Even if you're alive, how do we say this is a work by you and this is not a work by you?"

Here's another complication: The signature on the painting in question spells the artist's last name Doige, with an e, but the famous artist spells his name with no e. And there was a Peter Doige in the Thunder Bay Correctional Centre in the 1970s. According to his sister, he was fond of art and music and liked to paint. Doige died in 2012.

After Tuesday's ruling, Doig's lawyer, Matthew Dontzin, released a statement that said, "I have rarely seen such a flagrant example of unethical conduct in the U.S. courts nor a case that inflicted such needless burdens on a defendant. Artists should be grateful to Peter for having the ethical and financial fortitude to fight tirelessly to ensure that justice prevailed in today's verdict."