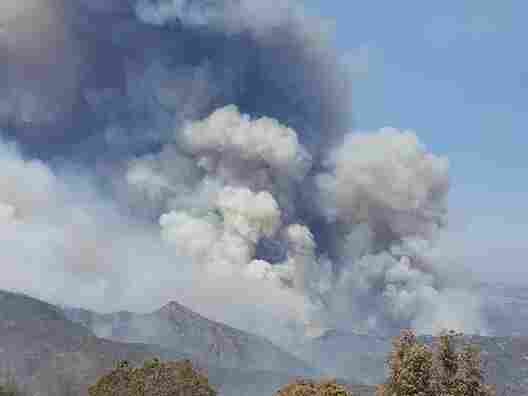 Firefighters have reached full containment of a blaze east of Los Angeles that forced tens of thousands to evacuate their homes. At the same time, multiple wildfires continued to challenge crews throughout the state.

California's Department of Forestry and Fire Information declared the Blue Cut Fire 100 percent contained Tuesday — but not before the 36,000-acre fire destroyed nearly 100 homes and forced the evacuation of 80,000 people in San Bernardino County.

By Saturday, crews had largely contained the blaze, allowing the lifting of evacuation orders for many residents. NPR's Nathan Rott tells our Newscast unit that more than 300 crews were pulled off the fire as it dwindled.

"Attention is turning from that fire ... toward others," Nathan says.

Statewide, 10,000 fire personnel are battling six major wildfires, including the Chimney Fire, which is burning in San Luis Obispo County.

That inferno has already consumed 53 structures and 37,101 acres in Central California near the Hearst Castle, built by publishing magnate William Randolph Hearst, now a tourist attraction.

On Saturday, the California Parks Department announced the property's closure owing to poor air quality. It remains closed through the week.

Due to air quality issues from #ChimneyFire, tours @ #HearstCastle have been cancelled until further notice. Check back with us for updates.

Nearly 4,000 fire personnel are working on that fire, which is considered 35 percent contained.

In Northern California, the long-burning Soberanes Fire is 60 percent contained. The fire has been burning for a month and has consumed some 87,000 acres north of Big Sur. At least one death has been attributed to the blaze.

And just west of Los Angeles, the Rey Fire is burning through wilderness in Santa Barbara County. So far, 27,000 acres have burned. The fire is 30 percent contained.