Accessibility links
Attack At American University Of Afghanistan In Kabul Kills 7 Students : The Two-Way Gunmen attacked the heavily fortified campus in the capital on Wednesday evening. At least 13 people died before Afghan forces killed the attackers. 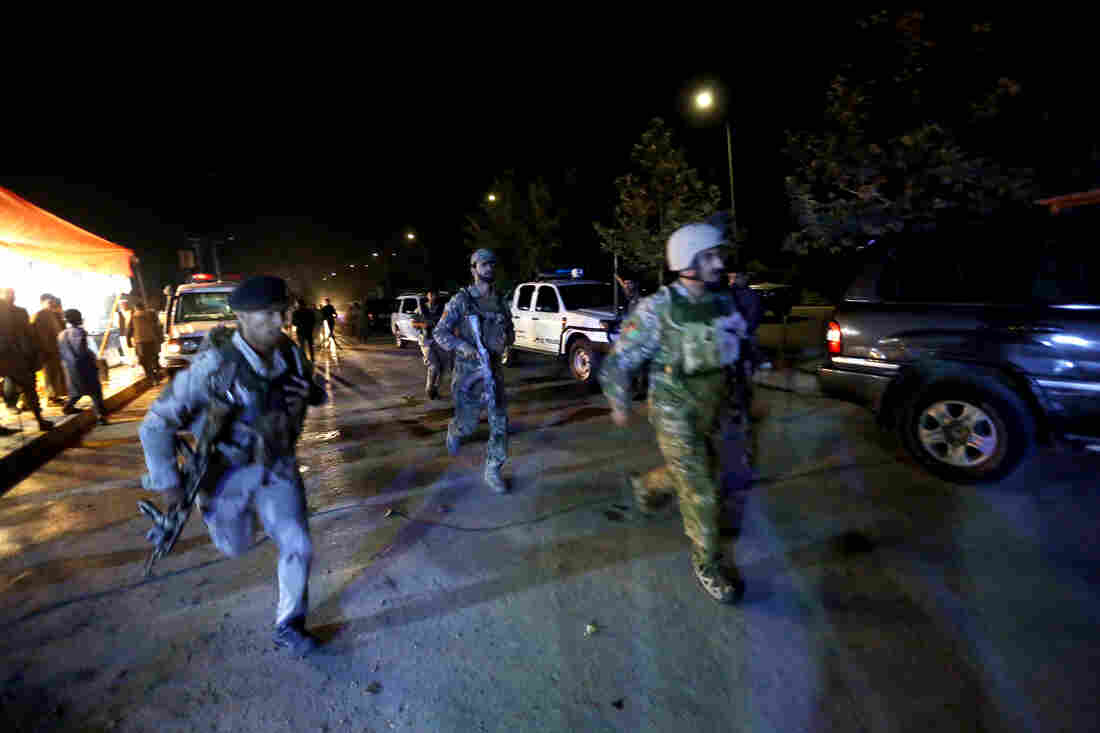 Afghan security forces rush to respond to an attack on the campus of American University of Kabul on Wednesday. "We are trying to assess the situation," President Mark English told The Associated Press. Rahmat Gul/AP hide caption 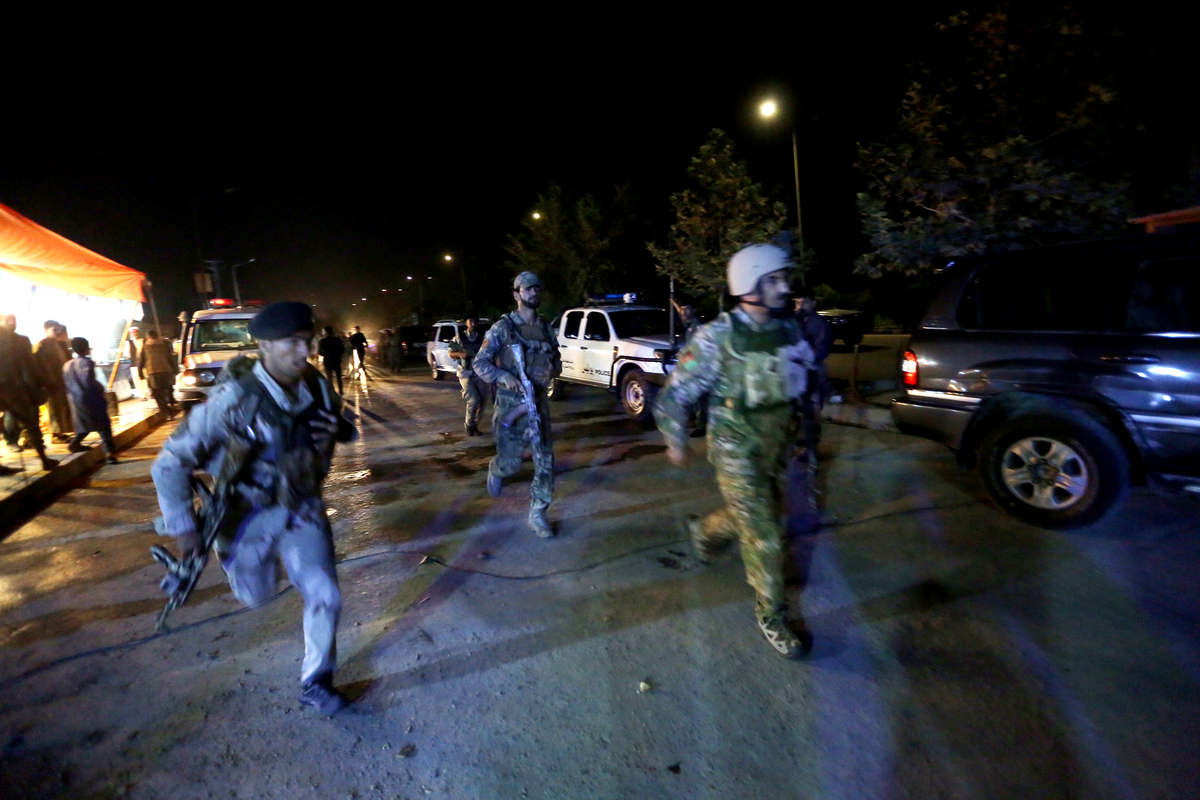 Afghan security forces rush to respond to an attack on the campus of American University of Kabul on Wednesday. "We are trying to assess the situation," President Mark English told The Associated Press.

A violent attack at the American University of Afghanistan in Kabul on Wednesday killed at least 13 people, including 7 students and one professor, officials say.

A press release from the Afghan president's office says five security personnel — two security guards and three members of the National Security and Defense forces — were also killed in the attack, while dozens of students and police officers were wounded.

The attack began with a suicide car bombing at an entrance to the heavily-fortified campus on Wednesday evening, The Associated Press reports. Armed gunmen then entered the campus and began a nine-hour siege, which ended when Afghan police killed the attackers.

During the extended attack, students and staff hunkered down in place or fled for their lives, witnesses say. For hours overnight, police worked their way through the university, searching for attackers and evacuating hundreds of students.

The gunmen were armed with grenades and automatic weapons, the AP reports, and were killed by police after 3 a.m. local time.

Hours after the siege ended, it's still unclear exactly how many attackers participated and whether they belong to a specific militant group. There has been no public claim of responsibility, but the AP reports that the Afghan government suspects Taliban involvement.

All U.S. citizens at the school have been accounted for, the U.S. State Department says.

The attack came during what should have been a year of celebration for the school — its 10th anniversary. For a decade, the school has offered a U.S.-style liberal arts education to young people in Afghanistan.

During the attack, Jennifer Glasse, reporting from Kabul, told our Newscast unit that dozens of police, security forces and special forces had surrounded the campus. She continued:

"The explosion went off at about 7 o'clock here and a number of attackers got into the campus of the American University, where students were in the middle of evening classes. So dozens if not hundreds of students are inside the university and a number of the buildings there. We've heard some gunfire — it's been fairly quiet but a few sporadic bursts of gunfire and shots."

Student Freshta Ibrahimi told NPR that she was eating dinner with friends on campus when explosions and gunfire rang out. They started running toward the emergency door to try to get to the street.

"When we were running ... we were hearing the fire of guns again and everybody was shouting 'Let's run, run! They're in the campus and they're firing!' " Ibrahimi says. "I myself started crying when I heard the gunfire and how it was close to me."

She says she eventually made it out to safety. After her group ran to a main street away from the campus, "I couldn't stand on my feet and I couldn't breathe," she said. 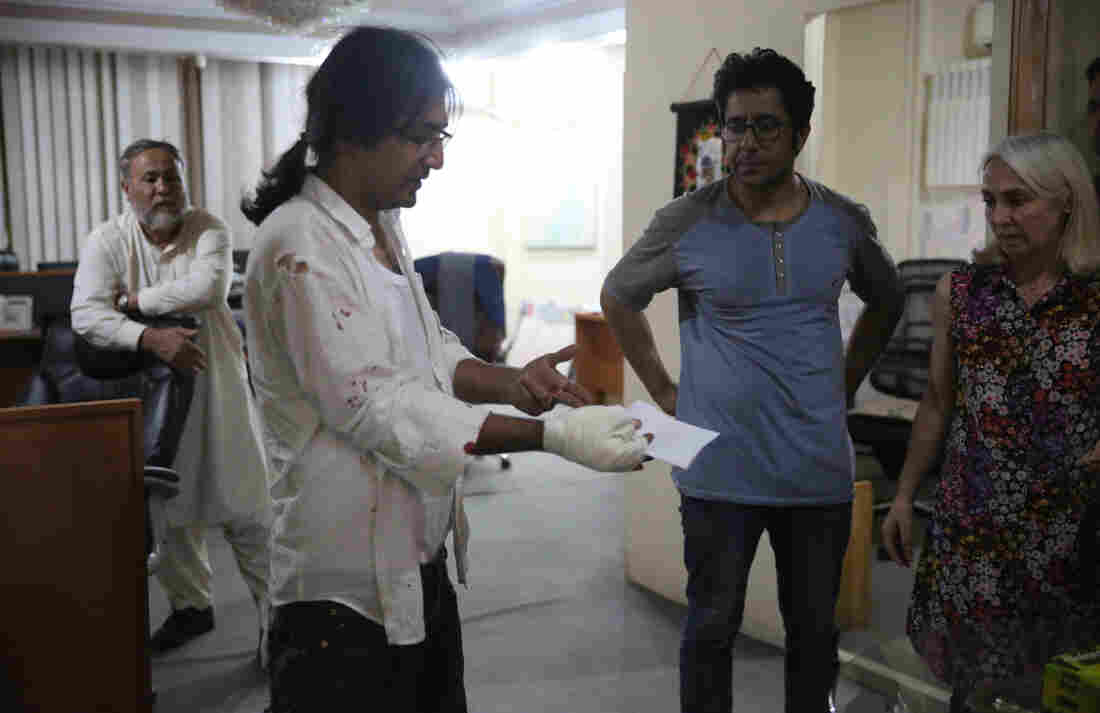 Associated Press Photographer Massoud Hossaini (front, center) discusses with his colleagues and relatives his experience during the attack on the campus on Wednesday. Ahmad Seir/AP hide caption

Pulitzer Prize-winning photographer Massoud Hossaini also survived the attack. Early on, he tweeted that he was stuck on campus and heard gunshots and explosions, noting "this maybe my last tweets."

But he escaped. He spoke with the AP about the harrowing experience, saying he was in a classroom with 15 students when he heard an explosion:

" 'I went to the window to see what was going on, and I saw a person in normal clothes outside. He shot at me and shattered the glass,' Hossaini said, adding that he fell on the glass and cut his hands.

"The students then barricaded themselves into the classroom, pushing chairs and desks against the door, and staying on the floor.
Hossaini and about nine students managed to escape from the campus through a northern emergency gate.

" 'As we were running I saw someone lying on the ground face down, they looked like they had been shot in the back,' he said."

"This university is a lasting legacy of the United States in Afghanistan. We produce graduates that go on to actually change things on a day by day basis in this country," he said.

"We are a beacon, I think, of hope for many Afghan youth. I don't want to conjecture [about] why we were attacked but I can tell you that as a university we are doing all we can to advance education of the young people in this country."

The university was closed on Thursday and it's not clear when it will reopen, the AP reports.

English told NPR that the university's board of trustees needs to meet to discuss next steps, but that one thing is sure: 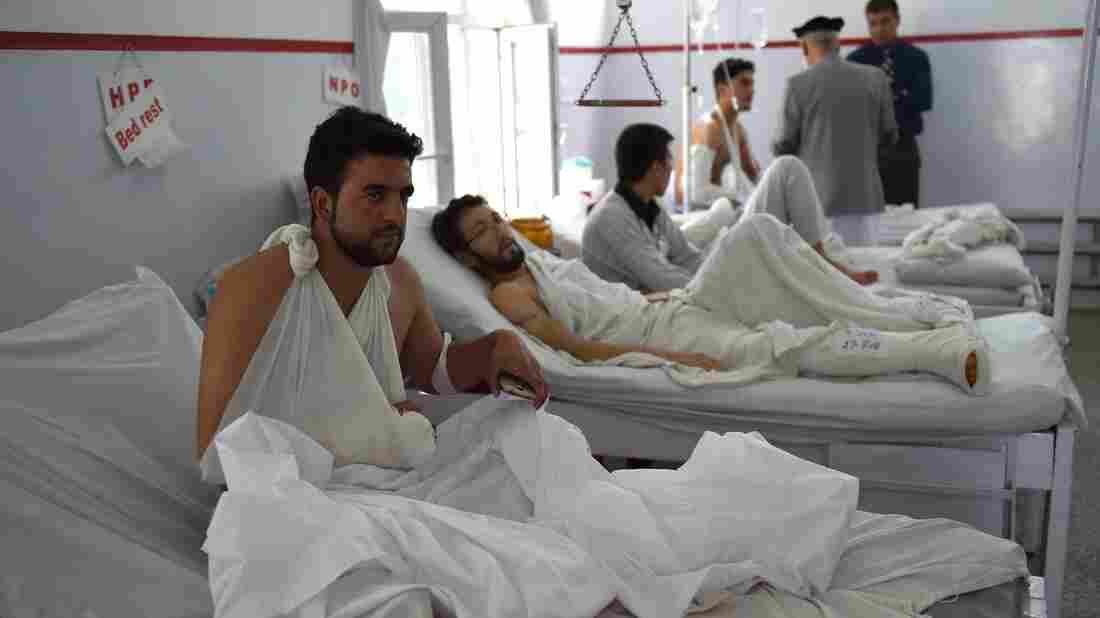 A wounded Afghan policeman looks on as he receives treatment on Thursday following a militant attack on the American University of Afghanistan in Kabul. Wakil Kohsar/AFP/Getty Images hide caption 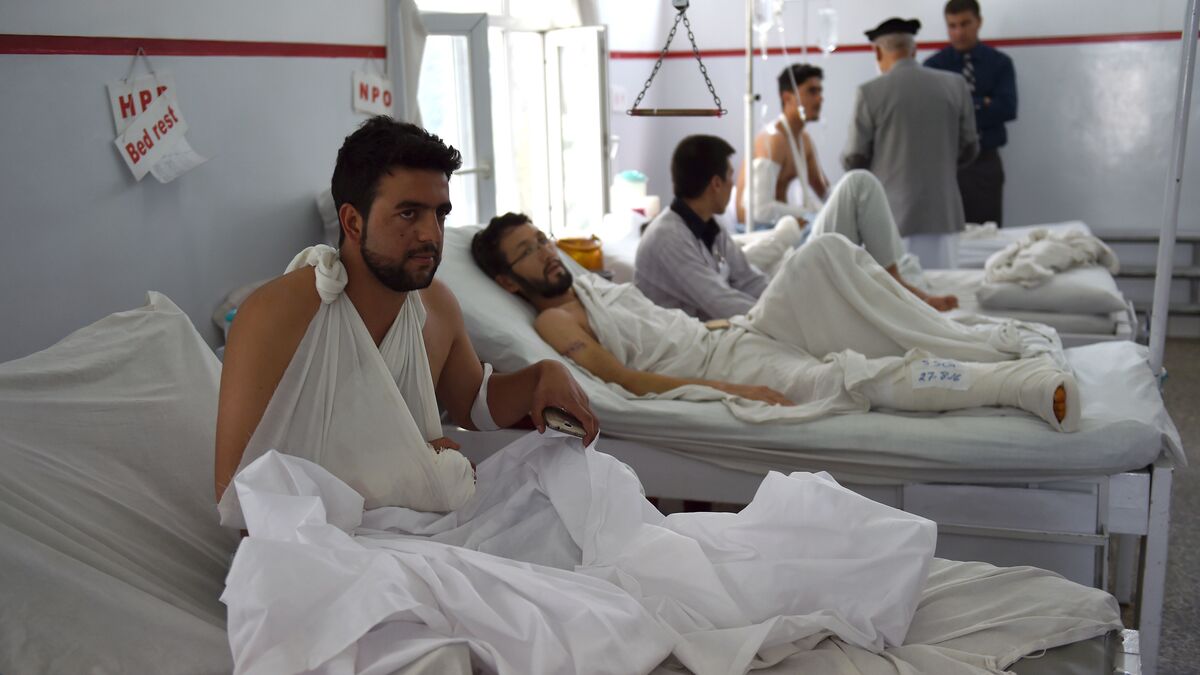 A wounded Afghan policeman looks on as he receives treatment on Thursday following a militant attack on the American University of Afghanistan in Kabul.

The attack comes just a few weeks after two foreign professors were kidnapped at gunpoint near the school. One professor was American, and one Australian. They have not been located.

In 2014, two employees of the American University of Afghanistan were killed in an attack on a Kabul restaurant. The deaths shook a school that had been largely insulated from violence.

"From behind its fortified walls, the university has operated relatively unscathed since it opened in 2006," NPR's Jacki Lyden noted at the time. "It's benefited from a huge infusion of cash from the United States, which sees the campus as an incubator of talent and entrepreneurship."