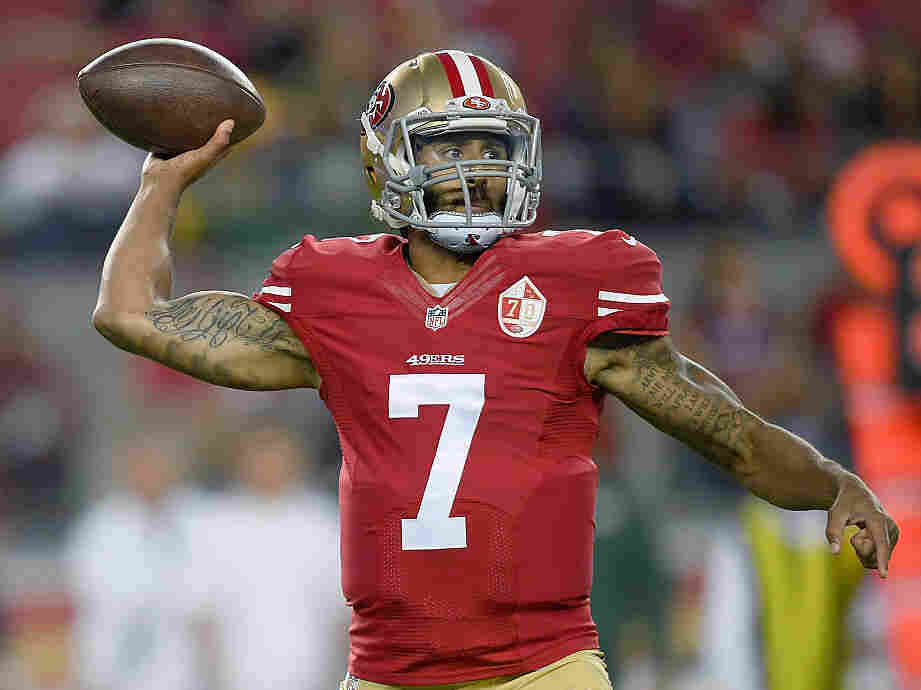 Quarterback Colin Kaepernick of the San Francisco 49ers throws a pass against the Green Bay Packers in the first half of their preseason football game on Friday in Santa Clara, California. Thearon W. Henderson/Getty Images hide caption 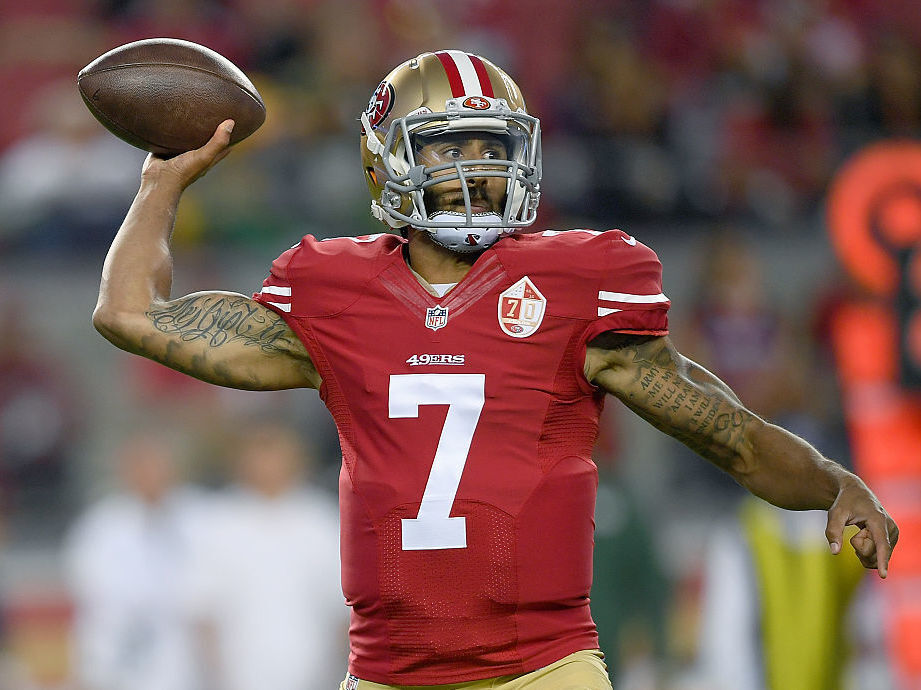 Quarterback Colin Kaepernick of the San Francisco 49ers throws a pass against the Green Bay Packers in the first half of their preseason football game on Friday in Santa Clara, California.

As players rose to stand for the national anthem at the 49ers-Packers game on Friday night, 49ers' quarterback Colin Kaepernick pointedly remained seated.

His gesture was to protest the treatment of African Americans and minorities in the United States, as he told NFL.com after the game. Kaepernick has remained sitting during the anthem "in at least one other preseason game," according to the site.

"I am not going to stand up to show pride in a flag for a country that oppresses black people and people of color," Kaepernick said, according to NFL.com. "To me, this is bigger than football and it would be selfish on my part to look the other way. There are bodies in the street and people getting paid leave and getting away with murder."

He told NFL.com that he did not notify the team in advance. "I am not looking for approval. I have to stand up for people that are oppressed. ... If they take football away, my endorsements from me, I know that I stood up for what is right," Kaepernick said. NFL.com reports that Kaepernick recently "decided to be more active and involved in rights for black people."

In a statement carried by NFL.com, the 49ers said they recognize his right to remain seated:

"The national anthem is and always will be a special part of the pre-game ceremony. It is an opportunity to honor our country and reflect on the great liberties we are afforded as its citizens. In respecting such American principles as freedom of religion and freedom of expression, we recognize the right of an individual to choose and participate, or not, in our celebration of the national anthem."

Kaepernick's protest has drawn comparisons to a similar gesture 20 years ago from Denver Nuggets guard Mahmoud Abdul-Rauf, which generated a major controversy. He was suspended for one game and ultimately agreed to stand with his head bowed in prayer, as SB Nation reported.

The gesture has also ignited debate and is currently trending on Twitter. It has sharply divided fellow NFL players.

For example, Miami Dolphins running back Arian Foster wrote, "the flag represents freedom. the freedom to choose to stand or not. that's what makes this country beautiful." Later, he wrote, "protest is imperative for change. it invokes the conversation."

the flag represents freedom. the freedom to choose to stand or not. that's what makes this country beautiful. ... https://t.co/Ev5D9ACe78

Activists changed USA for better but have to associate Nat Anthem w/ military that die for ur right to protest. Stand up. Find another way

Texts coming in from coaches, players, front office execs from around league on Kap. So far every player backs him. No coach/exec does.

Wow the amount of people who agree with sitting during the national anthem is truly disturbing! we wonder why our country is in the toilet?!

Bad decision by @Kaepernick7 but bc of the men/women who died for that flag, he has the liberty to disrespect them #betterwaystogetattention

Kaep is using his platform & brand to make a compelling & polarizing point, which is his right, even if it's met with ire!#idontagree

The easy thing to do is to make fun of Kap and his play. How about trying to understand where he's coming from....but that would be too hard