Accessibility links
In 36 Hours, More Than 10,000 People Are Rescued In The Mediterranean : The Two-Way The Italian navy and aid groups rescued 3,000 people coming from Libya on Tuesday and nearly 7,000 on Monday. Italy is struggling to handle the load.

In 36 Hours, More Than 10,000 People Are Rescued In The Mediterranean

In 36 Hours, More Than 10,000 People Are Rescued In The Mediterranean 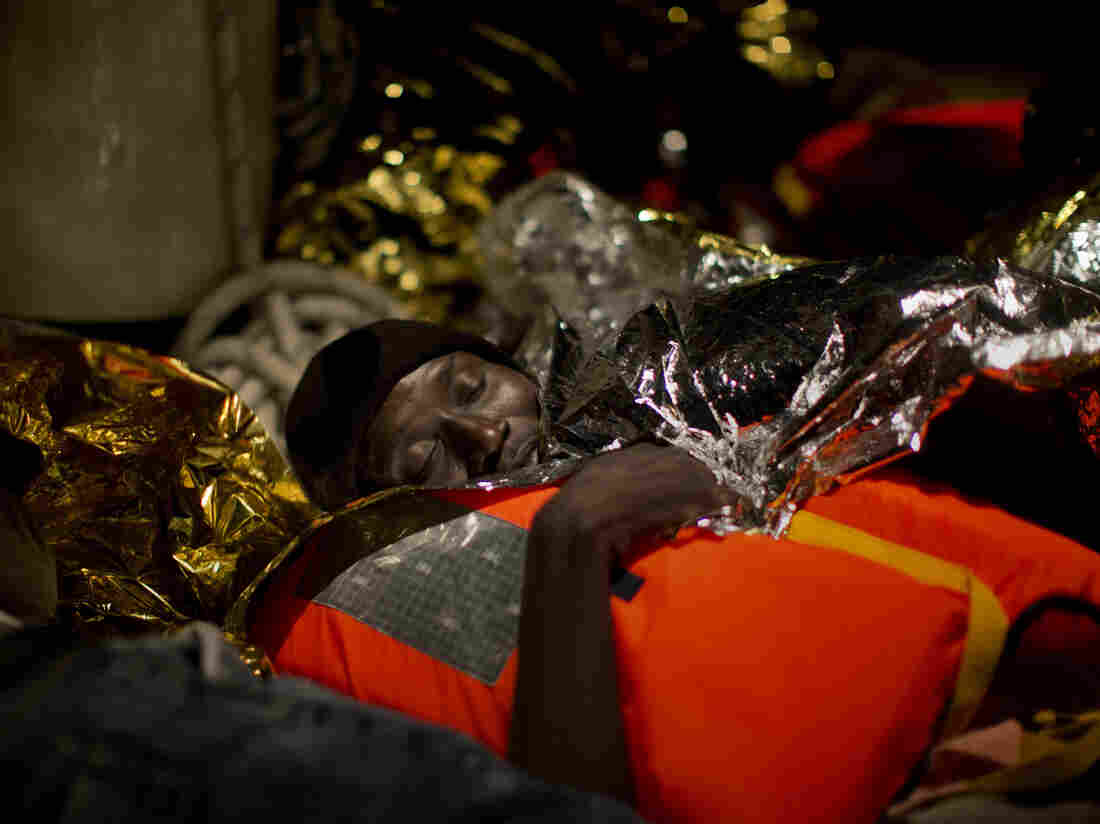 A refugee from Eritrea rests on a ship operated by the Italian navy after being rescued from the Mediterranean sea, about 13 miles north of Sabratha, Libya, on Monday. Emilio Morenatti/AP hide caption 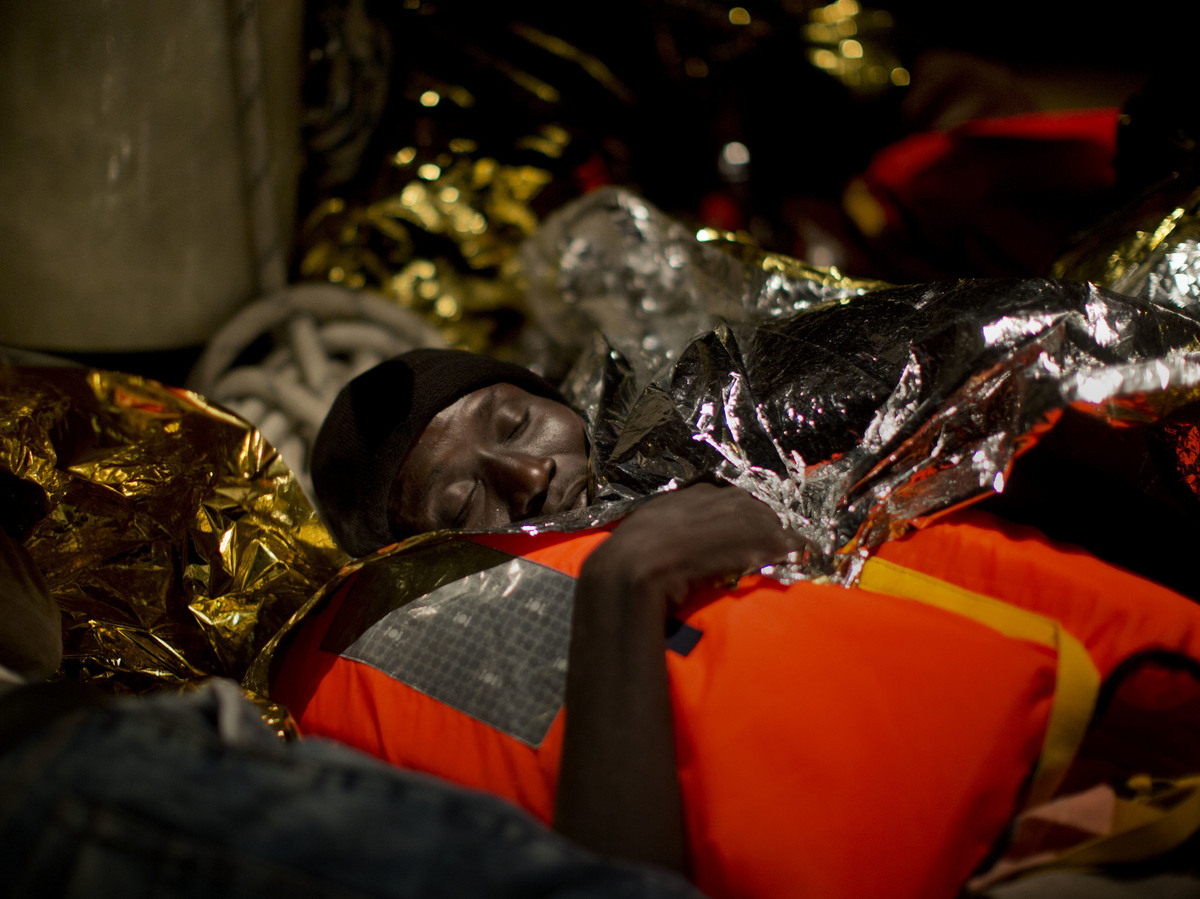 A refugee from Eritrea rests on a ship operated by the Italian navy after being rescued from the Mediterranean sea, about 13 miles north of Sabratha, Libya, on Monday.

The twin babies were just 5 days old, a month premature and ill-equipped for a dangerous journey across the Mediterranean Sea. But their mother, 26-year-old Tesfamamrim Merhawit, decided the sea ahead was safer than the land they left behind. Traveling alone with her infants, she told The Associated Press she boarded a boat in Libya, bound for Europe.

But the boat didn't have enough fuel to get to Europe. About 15 miles off the coast, she and her children were rescued by Médecins Sans Frontières, or MSF. They are being treated by the medical aid group at a hospital in Sicily.

UPDATE: Today we checked in on this little guy and his twin. They're in hospital in #Sicily and both doing well. pic.twitter.com/chNtMatnnm

They are among the more than 10,000 people rescued from the western Mediterranean in just 36 hours, beginning with close to 7,000 people Monday. On Tuesday, an additional 3,000 people were rescued by the Italian navy and vessels operated by aid groups including MSF.

The International Organization for Migration, or IOM, tells NPR it might be the largest concentration of people to arrive in Italy since the beginning of the European migrant crisis. However, the total number of people arriving in Italy is nearly the same as this time last year — at about 115,000, compared to about 116,000 in the first eight months of 2015.

The difference is the sheer magnitude of the rescue operation in the past two days, says Flavio Di Giacomo, the spokesman for the IOM in Italy.

1 Day, 40 Boats, Thousands Of People Rescued Trying To Get To Europe

"It is very difficult to rescue so many people," he says. "It is dangerous for everyone, and then all the people must be transported to the Italian coasts."

The rescuers helped more than 40 rubber and wooden boats on Monday. As the Two-Way reported:

"As the [rescue] crews neared the dangerously over-filled boats, men in life vests hurled themselves into the water and swam toward the rescue vessels.

"Some people jumped overboard in just their clothes. Parents handed their babies to strangers in coast guard uniforms to get the infants to safety."

Di Giacomo estimates it will take up to three days to bring all the rescued people to land. Most of them will land first on Italian islands such as Sicily and Lampedusa.

"About 600 to 1,200 people arrive in each landing," he says. "Everyone is fingerprinted, there are security and medical checks. The system is very efficient, because Italy has been doing this for many months now." He says he expects the emergency situation, as he calls it, will be over by the end of the week, assuming the pace of rescues slows.

Still, even after all the rescued people are on land and initially identified, it is just the beginning of a months- or years-long process to seek asylum in Europe. The IOM says it is helping to transport people to facilities all over Italy to wait the eight months or more it takes for the government to decide whether to grant asylum. Those facilities can be everything from small apartments to abandoned schools.

Even if a person is not granted asylum, it can take up to three years before the appeals process ends and the person is actually ordered to leave Italy. And Di Giacomo stresses that it is difficult to repatriate people who arrive without official documents from their home country, as many of the people rescued this week do.

"It is very unlikely many of these people will be involuntarily sent back to their country of origin," he says. "When there are 10,000 people at one time, it is always a challenge to find enough places for people to live, but Italy can do it."