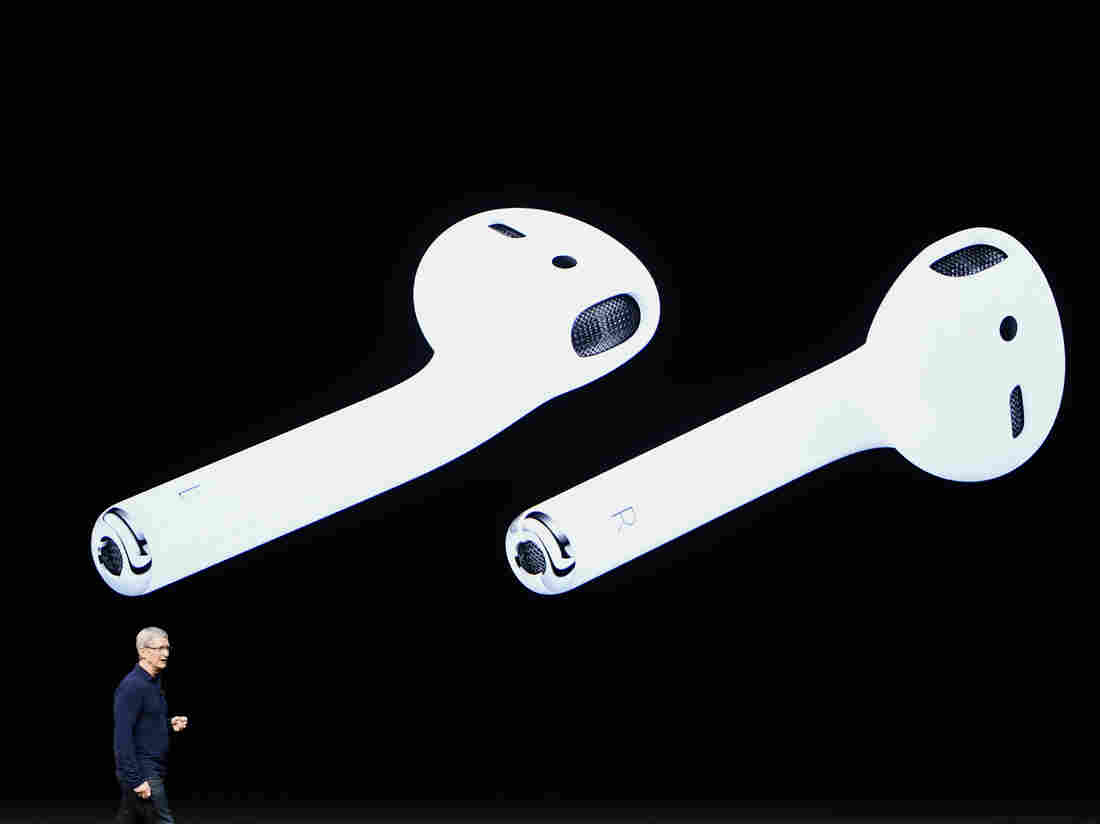 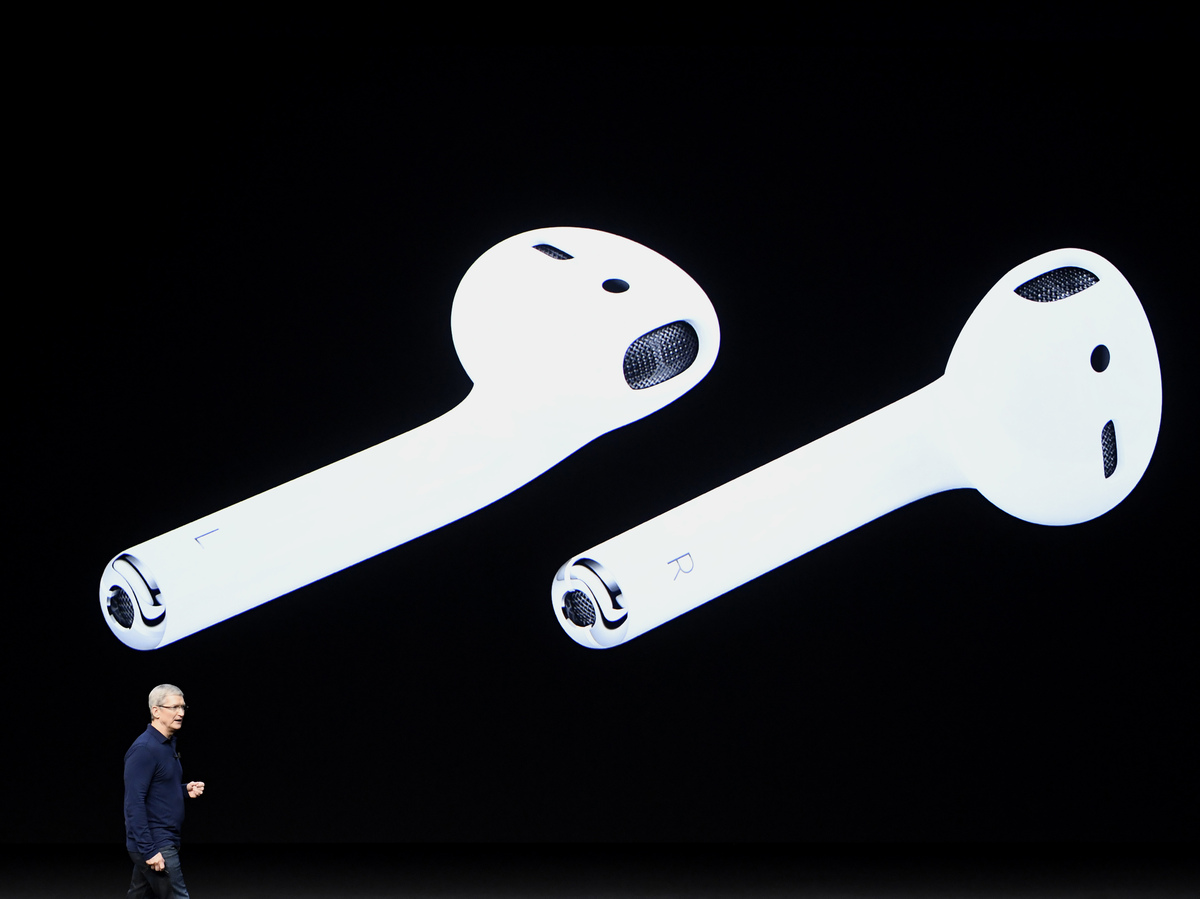 Apple CEO Tim Cook discusses the company's new wireless AirPods headphones during an event in San Francisco on Wednesday in which Apple also presented the iPhone 7.

Apple had waited many years to send its very first tweet. It finally happened on Wednesday, with a release of a sponsored tweet promoting the new iPhone 7: "New cameras. Water-resistant. Stereo speakers. Longer battery life."

Except — oops! — CEO Tim Cook had yet to announce the new version of the smartphone. When he finally did, he said, as always: "It's the best iPhone that we have ever created."

The Next iPhone Can't Do These Two Things At Once

The long-running speculation about the new features on the phone proved largely true. The 7 and 7 Plus, for sale later this month, look very much like the 6 and 6 Plus, though ever-so-slightly lighter — and, yes, without a headphone jack.

"The reason to move on [is] courage," said Apple's Phil Schiller in revealing the change. "The courage to move on, do something new that betters all of us."

Instead, new phones will come with adapters that plug into the same port as a charging/data cord. But what Apple really wants you to do is buy its new $159 product: AirPods — wireless headphones that look like the buds of the regular Apple headphones but cordless — for an "effortless and magical listening experience," as Cook put it. 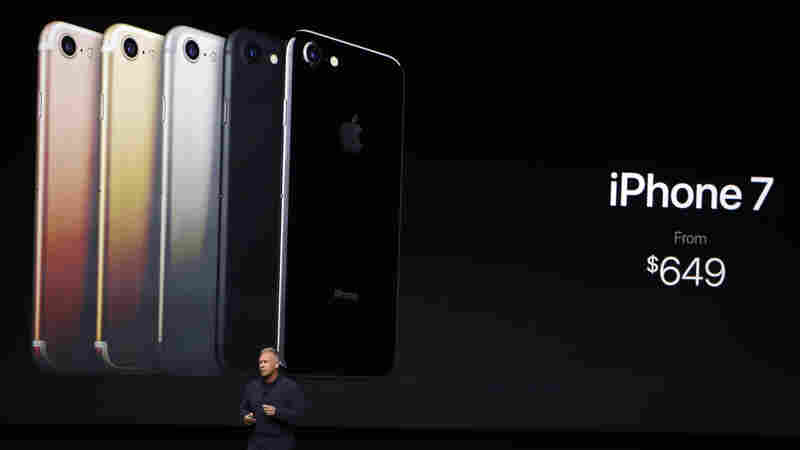 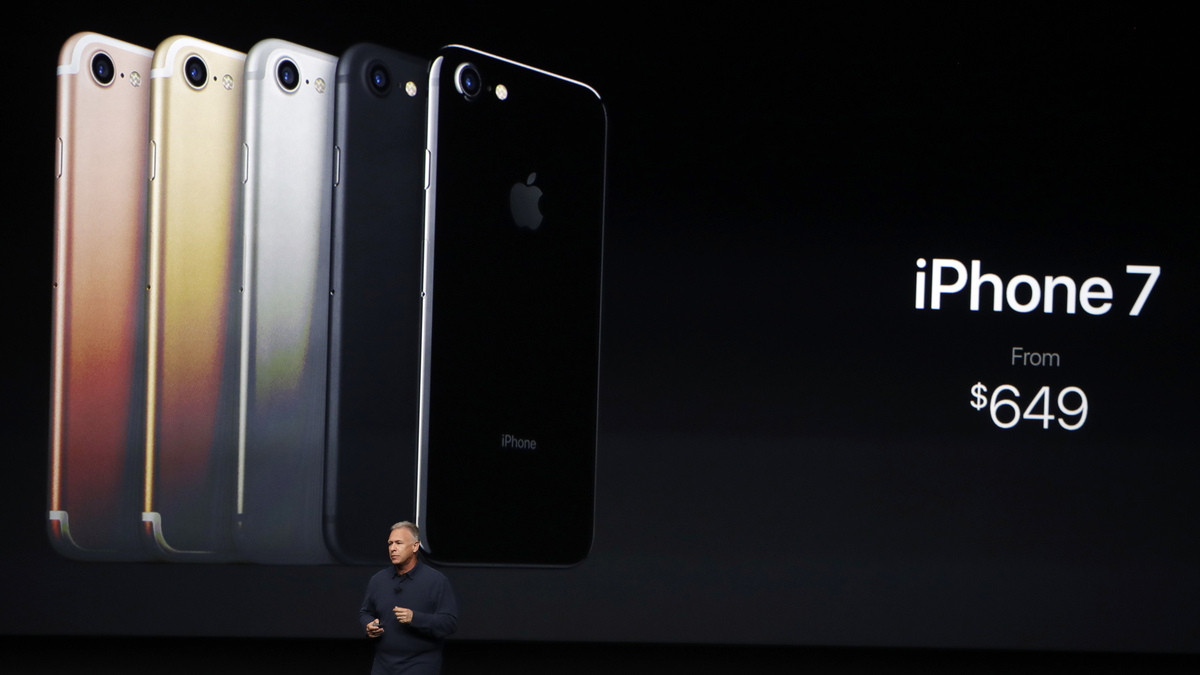 The new iPhone is also water- and dust-resistant, has a new home button that doesn't physically click, stereo speakers, a bit longer-lasting battery, a really fancy camera setup (with low-light capacity and color recognition, and better zoom on the two-camera 7 Plus) and new body options in matte black and "jet black."

These changes may seem like a far cry from significant iPhone overhauls Apple had done in the past to encourage users to buy a new device every two years. Some observers had argued this is a sign of iPhone's maturing as it approaches its 10th birthday.

But Forrester analyst Julie Ask argues the iPhone 7 will pick up momentum after a possibly lukewarm response. "Consumers underestimate the engineering feats that the iPhone 7 brings, like the audio, camera, processing power, etc. in such a small package," she said in a statement.

Shipping in mid-September, the new phones are priced starting at $649 for the iPhone 7 and $769 for the iPhone 7 Plus, which has a bigger screen. They will also start with a higher memory capacity of 32 gigabytes, as Apple gets rid of the 16GB option.

In other releases, the company unveiled a "Series 2" of the Apple Watch that is waterproof and includes a GPS — an appeal to the workout market of runners/hikers/bikers/swimmers/surfers, where the watch has faced persistent competition from other wearables.

The watch also gets in on the Pokemon Go craze of the summer with a game adaptation specifically for the device.

But perhaps a bigger gaming piece of news came from Nintendo, which announced that Super Mario is finally coming to the app store.

Shigeru Miyamoto, known as the father of Mario, took the stage to announce a new game called Super Mario Run, which you can play on the phone with one hand — "while eating a hamburger or eating an apple," as Miyamoto said.

Shares of Nintendo, which as The Verge points out "has been slow to bring its iconic characters and games to smartphones," jumped on the news. Apple's shares didn't see major gains.