Accessibility links
Temporary Order Halts Construction On Part Of North Dakota Pipeline : The Two-Way A federal judge has granted the Standing Rock Sioux Tribe a temporary restraining order against a company building a crude oil pipeline. It covers only a portion of what the tribe requested. 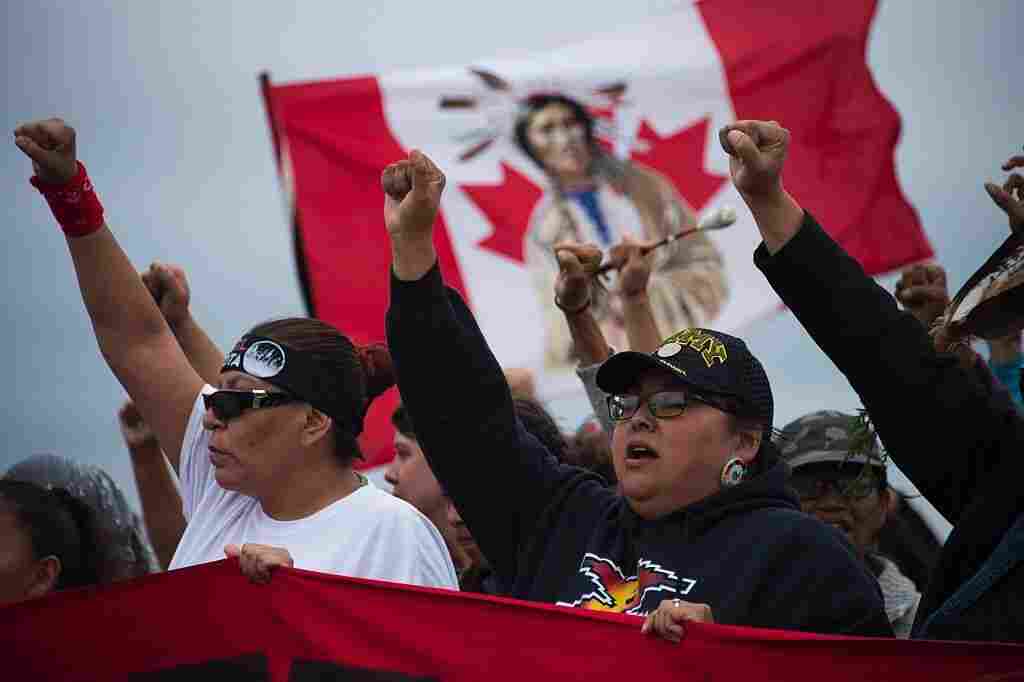 Native Americans march on Sunday to a sacred site they say was disturbed by bulldozers working on the Dakota Access Pipeline, near an encampment where hundreds of people have gathered to join the Standing Rock Sioux Tribe's protest. Robyn Beck /AFP/Getty Images hide caption 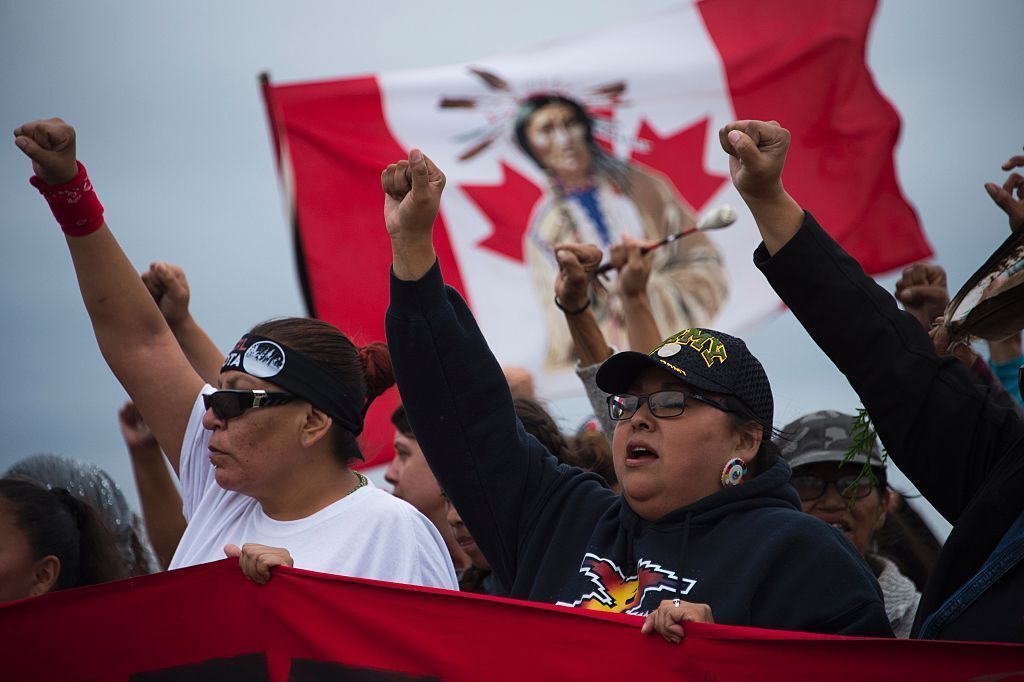 Native Americans march on Sunday to a sacred site they say was disturbed by bulldozers working on the Dakota Access Pipeline, near an encampment where hundreds of people have gathered to join the Standing Rock Sioux Tribe's protest.

A federal judge has granted part of a Native American tribe's emergency request to halt construction of a section of oil pipeline in North Dakota.

The Standing Rock Sioux Tribe fears the pipeline could contaminate its drinking water and sacred lands, as we've reported. U.S. District Judge James E. Boasberg's temporary restraining order is "a mixed victory for both sides," as The Bismarck Tribune wrote.

In the motion filed Sunday, the tribe had sought protection for a larger area along the planned route for the $3.8 billion Dakota Access Pipeline — which is set to span some 1,200 miles, from North Dakota to Illinois.

The area not covered by the judge's order includes lands that the tribe is particularly concerned about protecting. Work in that area, west of State Highway 1806, started over the weekend, according to Prairie Public Broadcasting,

Tuesday's ruling is part of a larger lawsuit filed in July seeking an injunction against the U.S. Army Corps of Engineers, which authorized the pipeline's construction. As we've reported, "the tribe filed a complaint with the United States District Court for the District of Columbia, arguing that the Army Corps did not follow proper procedure when it gave Dallas-based Energy Transfer Partners the go-ahead to build the pipeline." 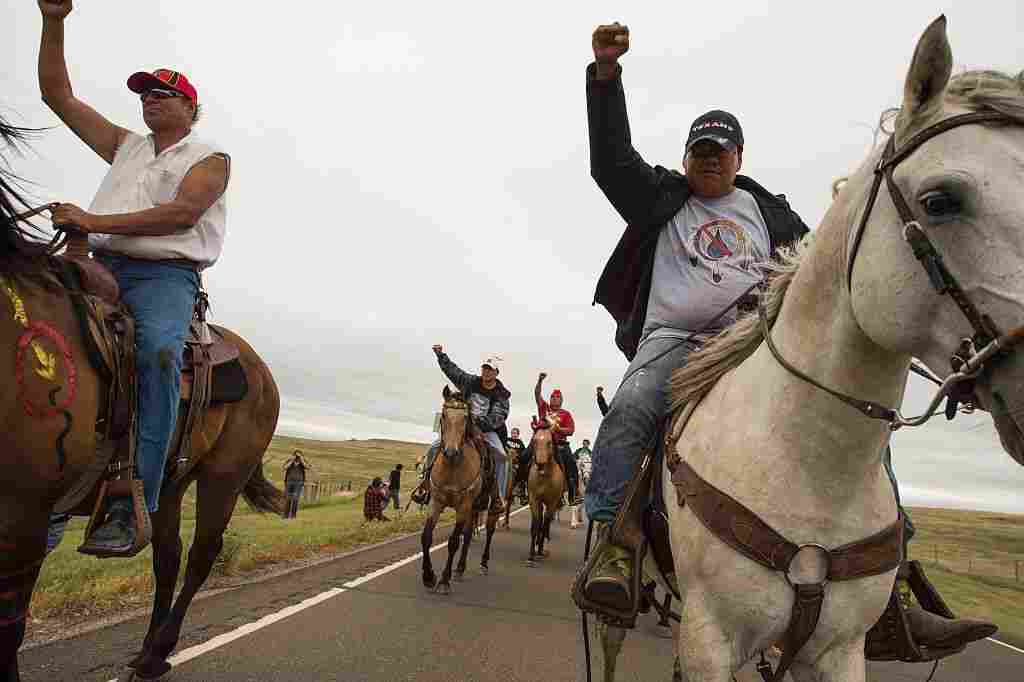 Protesters ride near the site of construction. The company building the pipeline says in court documents that it "is not destroying and has not destroyed any evidence or important historical sites." Robyn Beck/AFP/Getty Images hide caption

The judge is expected to rule Friday on whether to grant the tribe's request for an injunction.

"In the afternoon of Friday, September 2, 2016, the [Standing Rock Sioux Tribe] further submitted recently discovered evidence of an astonishing archaeological find. This find concerned historically, culturally, and religiously important stone features and grave markings to the successors of the Great Sioux Nation, including graves of chiefs, warriors and Bear Medicine healers. These formations and grave sites are adjacent to and in the pipeline's proposed right-of-way approximately 1 to 2 miles away from the Lake Oahe crossing site. Less than 24 hours after SRST's filing, Dakota Access desecrated and destroyed the sites described in SRST's declaration."

The company responded that it "is not destroying and has not destroyed any evidence or important historical sites."

Tribal Chairman Dave Archambault II told Prairie Public Broadcasting that he is disappointed with Tuesday's restraining order "because I know more of our sacred sites are going to be destroyed. ... I'm OK with the fact that we know there's not going to be any construction near the camp on the east side of Highway 1806. I'm not happy with the ruling, however, because there's a lot of land being destroyed."

Tensions over the pipeline have escalated recently. Hundreds of Native Americans from tribes nationwide have camped near the construction site in North Dakota. As we reported, "one demonstration over the weekend turned violent. Some protesters ended up bloodied and the local sheriff said three private security officers had been hurt."

In a video posted to Facebook on Tuesday, Archambault said that "we still have to remain peaceful and respectful. We still have to think about what we're going to leave behind after all of this." 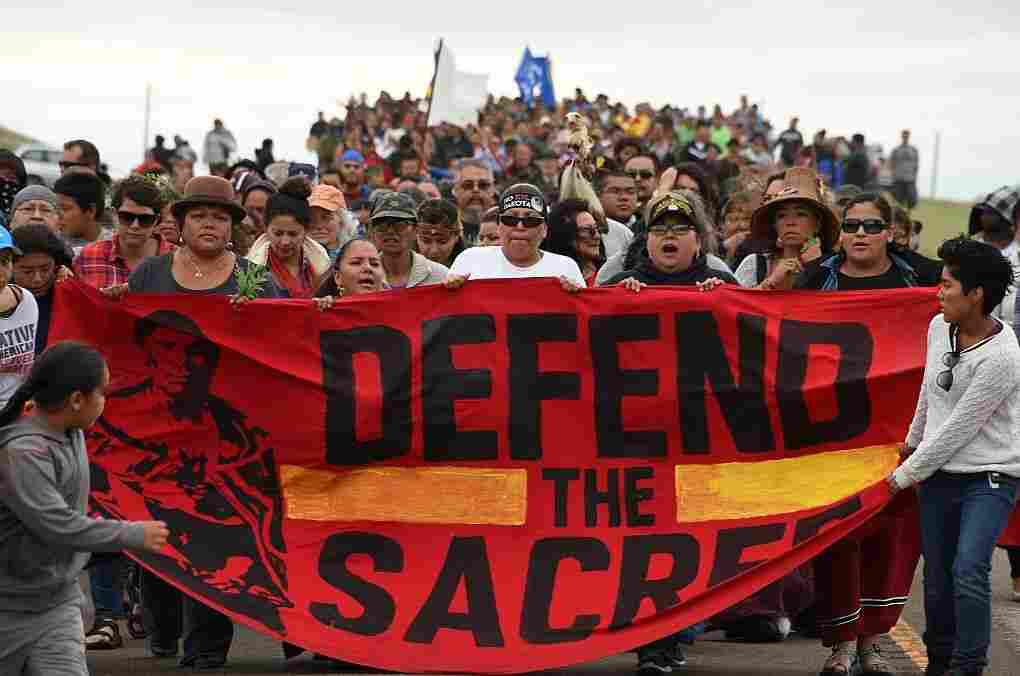 Stein addressed the possibility of charges in a post on Twitter on Tuesday, and then asked, "Will they charge the oil company that razed sacred burial grounds?"