Accessibility links
WATCH: Bristol Motor Speedway Transformed Into Vast Football Stadium : The Two-Way On Saturday, Tennessee and Virginia Tech will meet at the speedway for a game before an anticipated 150,000 fans — an all-time record for college football. The racetrack had just a few weeks to prep.

It took two decades to arrange a college football game at Bristol Motor Speedway — and just 19 days to set up for it.

On Saturday night, Tennessee and Virginia Tech are facing off in what's been dubbed the "Battle at Bristol." The Associated Press reports the showdown at the speedway — about halfway between the two schools — has been discussed for 20 years, and was announced in 2013.

But the racetrack, nicknamed "The Last Great Colosseum," had less than three weeks to actually transform into a football stadium. A NASCAR Sprint Cup Series race was held at Bristol on Aug. 21.

In the days since, the AP says, the speedway brought in 450 truckloads of rock and sand and more than 100,000 square feet of Astroturf — converting a bowl-shaped infield into, well, a football field.

Between the base layer and the artificial turf there's some 180,000 pounds of silica and rubber, The Washington Post reports. The turf is exactly 1.5 inches tall — "measured three times in 10 locations," the newspaper writes.

The Post notes that the conversion involved more than installing Astroturf and a couple of field goal posts. The speedway also had to "gut two infield buildings, construct locker rooms, add thousands of seats to the grandstand and prepare the grounds."

The speedway hasn't said how much the conversion cost. The result is a football stadium that thoroughly dwarfs the University of Tennessee's home stadium, Neyland — which has a capacity of more than 100,000.

Up Next, Battle at Bristol!

Just check out the size of this place. That's Neyland sitting inside of BMS!! pic.twitter.com/6wjqeScpZN

One thing didn't need to be installed in the whirlwind of activity: the massive video unit suspended above the field, known as the "Colossus." The structure — "the world's largest outdoor center-hung four-sided video screen," as the Bristol Herald Courier notes — features screens 68 feet wide and 30 feet tall. It was installed this spring.

The Colossus replaces an older video screen mounted on a pylon. In 2013, when planning for the football game began, the speedway expected to have to remove that video screen to make room for a field.

The new, suspended video screen poses no such challenge, and it will make for a major improvement over the last football game played at the Bristol Motor Speedway, back in 1961. Knoxville's WBIR reports that an NFL exhibition game — between Washington and Philadelphia — was "pretty tough to see," as one spectator put it.

The game on Saturday is expected to draw some 150,000 fans to the speedway, which would be an all-time record for college football. The current record was set in 2013, when 115,109 people showed up at Michigan Stadium to see the University of Michigan Wolverines beat Notre Dame.

And if you're wondering why the schools and the speedway would go to all this trouble, SB Nation estimates that the game — while it might be "weird and awkward" to watch in person, and tough to see even the Colossus from the nosebleed seats — will make "a ton of money." Tickets are currently selling for hundreds of dollars each.

Afterward, the field will be used for at least one more football game. 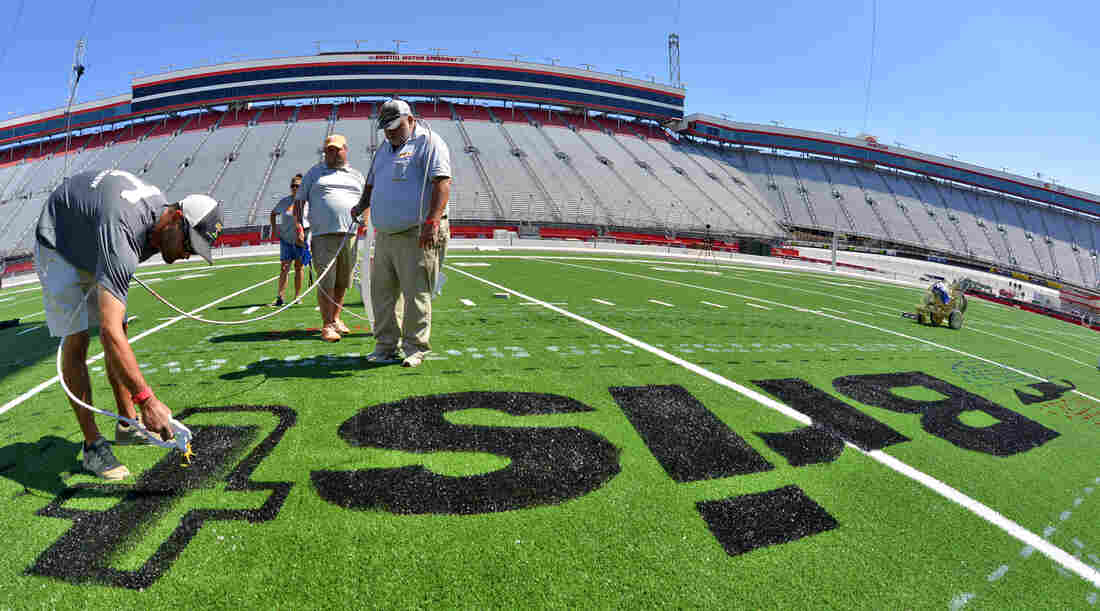 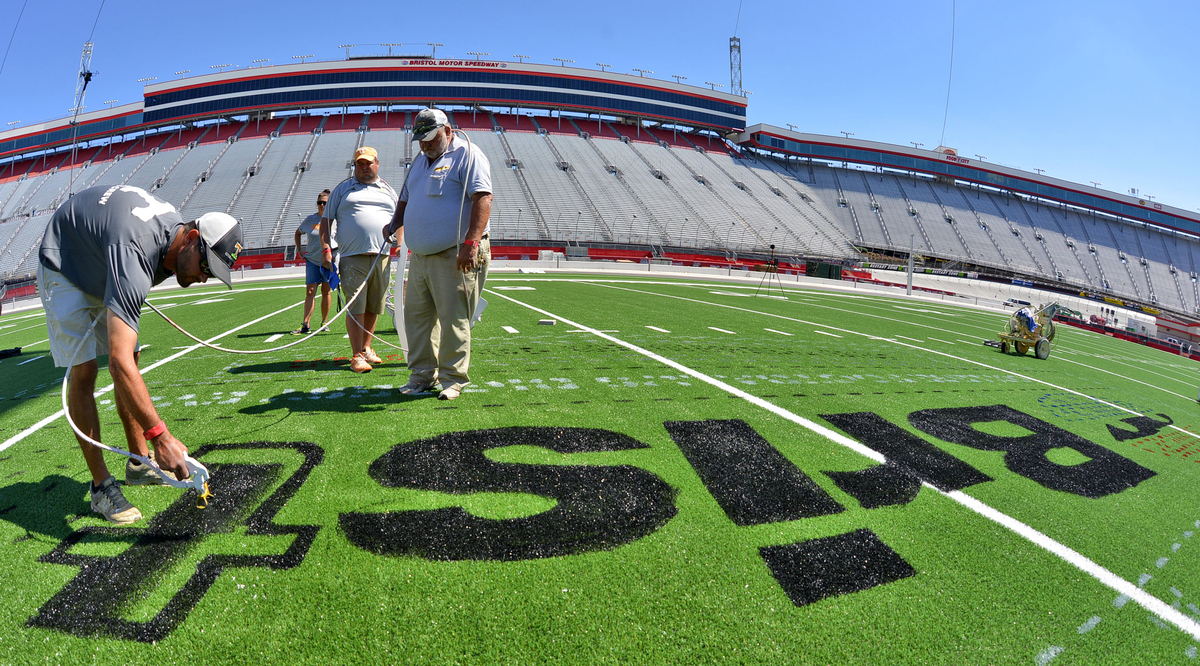 Members of the University of Tennessee grounds crew paint the "Battle at Bristol" logo on the football field at Bristol Motor Speedway in Bristol, Tenn.